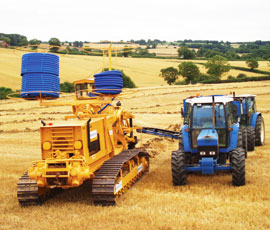 While the fundamental benefits of draining farmland are as relevant today as always, contractors are exploring new technologies to get the job done more efficiently. Jane Carley reports.

Land drainage was firmly back in fashion after the horribly wet summers of 2007 and 2008, with contractors across the UK assigned with the job of surveying, renewing and replacing long-neglected drainage schemes.

But after a couple of dry springs and a predicted drought, is there still a need for drainage?

Rob Burtonshaw, of Warwickshire-based contractor Farm Services, may have a vested interest, but he makes a strong case for the benefits of land drainage, especially as crop input costs continue to rise.

“Whatever your opinion on climate change, it seems we are still getting roughly the same amount of rainfall, just at different times,” he points out. “With pressure on farms to be more efficient and use less labour, if you can get back on the land earlier in the spring after a successful drainage project, then so much the better.”

Mr Burtonshaw acknowledges it is tempting to spend extra cash from better grain prices on a new combine and other shiny machinery.

“But it’s pointless if the land lies too wet at harvest and other critical times of the year to use it, or if yields are limited by poor drainage,” he says.

He says the fundamental benefit of installing a land drainage system – to shift excessive water from the surface and soil profile – is as important now as ever.

It may sound odd at first, but effective land drainage can also help combat drought, he adds. “By improving soil structure to reduce surface run-off and enable the ground to ‘hold’ as much water as possible, fields susceptible to drought can be more productive.”

Despite the decline in land drainage work that began with the ending of subsidies, there is still a contracting industry ready to provide expert advice and scheme design, as well as the specialist machinery involved. But companies operating in the sector have had to adapt.

In leaner times, Farm Services diversified by setting up a sportsfield division and taking on civil works like pipeline installation. The company is also working farther afield, going well beyond the original Warwickshire client base when Mr Burtonshaw’s grandfather joined the company in 1957.

Bulging job files attest to the level of repeat business the company achieves: “We often go back to farms that have not been drained for many years and the improvements can be significant,” he says. “We also take on new projects for existing customers who purchase more land.”

The approach can be cautious – farmers will often experiment by having a small patch drained to evaluate the results. Usually, they then ask the drainage team to return the following year to do more fields. Demand is such that last year 80% of Farm Services’ workload was on agricultural land.

As with most agricultural machinery, new technology is revolutionising the way that drainage schemes are designed and recorded, and the way the high-cost specialised machinery is operated. Mr Burtonshaw is studying the latest equipment and techniques used globally this year as a Nuffield scholar.

“Traditionally, every metre of drainage pipe installed has been measured with a wheel, with these measurements then used for invoicing and for generating completion plans that show where the drains are laid for future reference,” he explains. “Now, hand-drawn plans have been replaced with AutoCAD drawings on a computer and measurements are made using a GPS system, which accurately records the ‘as laid’ position, as well as the quantities of materials used.”

But this is only scratching the surface, it seems. In the USA, GPS is replacing the laser controls normally used to create the gradient planes that ensure trenchers lay drains with the correct fall, and this will be an important part of his study.

“GPS offers accuracy at least as good as lasers, if not better, and the equipment is faster and easier to set up,” says Mr Burtonshaw.

Mastenbroek trenchers built in Lincolnshire are the mainstay of the business. They need to be highly productive to make the job as cost-effective as possible, and to fit sufficient workload into a tight post-harvest window when most drainage installation is carried out. The largest trencher operated by Farm Services can lay at least 1,500m of pipe a day.

Materials are also being covered by Mr Burtonshaw’s Nuffield study because Farm Services is already investigating the use of recycled material to use as backfill on top of the pipes.

“It needs to be inert, hard wearing and dust free, and we have to assess whether farmers will accept it rather than a natural, quarried material,” he points out.

“When grain prices were low, we were looking to farm at the lowest cost per acre,” notes director Granville Stevens. “But now we want the best possible yield per acre and don’t want waterlogged areas bringing down the average.”

Spernal Farms grows wheat, oilseed rape and beans on 433ha (1,070 acres) of soils that vary from red marl and gravel to clay, and the old drainage system is starting to fail, with areas prone to flooding.

The 5ha field tackled by Farm Services last year is part of a block of 20ha (50 acres) identified as in particular need of drainage.

“It took around three days to complete and had little impact on the land; there are some bumps that need working down but it is minimal,” says Mr Stevens. “Land drainage is clearly a skilled job; some of the drains had to be a metre-and-a-half deep to get the falls right.”

Pre-harvest, the benefits are difficult to quantify in such a dry year but there are certainly no wet or bare patches.

“We’re planning to have one field drained each year now to spread the cost and Farm Services took that into account when designing the scheme. The next block drained will flow correctly into the same ditch used for the outflows from the first section laid last year,” notes Granville Stevens.

“We like to invest in capital projects where possible; in a previous share farming agreement we elected to only drain the very worst areas,” he adds. “But I believe that with input costs so high now it is imperative to get the best yields possible and improved drainage will help us achieve this.”