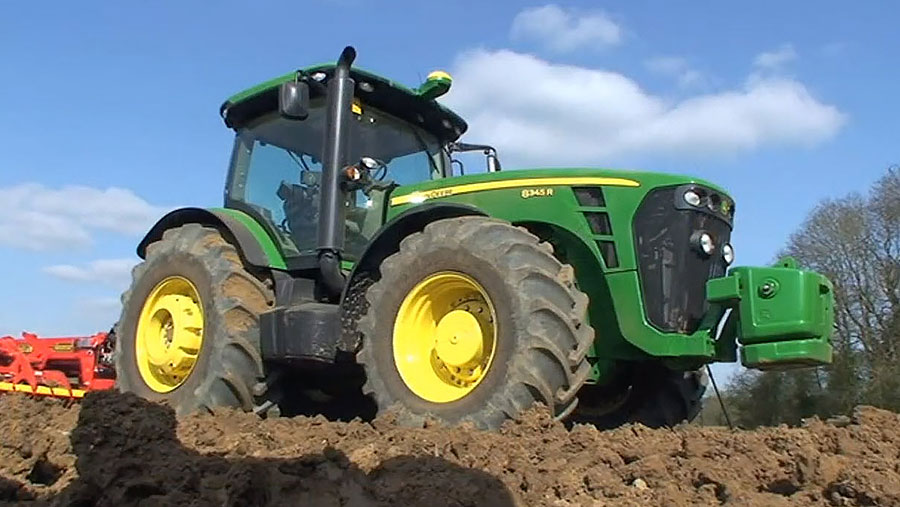 John Deere launched its range of high horsepower 8R tractors last autumn. Emily Padfield had a drive of both wheeled and tracked models to see how they perform in the field.

There’s a lot to be said for keeping things simple and that’s exactly what John Deere has done with its new range of Waterloo-built 8R tractors. At least that’s what it looks like to the casual observer.

The previous 8030 range saw the wheeled machine change pretty dramatically, but it’s the tracked machine this time that gets the overhaul in the new 8R range.

Essentially, the wheeled five-model line-up gets a new cab and more power thanks to tweaked engine management settings.

The 8RT range, however, is pretty much new from the ground up, sharing only the engine, gearbox and cab with its sibling. JD UK expects one in five 8R tractors sold to be tracked models, whereas worldwide, this is more likely to be one in 10.

Deere has opted for a variable geometry turbocharger (VGT) and exhaust gas recirculation (EGR) technology to meet the next round of emissions legislation, however the final tweaks will come sometime next year in order for it to meet Tier 4 Interim (Stage IIIb) requirements.

The VGT means the performance of the turbo itself can be precisely controlled, with the result that a third more boost pressure is available than on models fitted with merely a turbo and waste-gate setup.

This is for the simple reason that it can control, almost infinitely, how much air comes into contact with the impellor itself rather than it being either on or off, giving better overall bottom-end performance – all important for a high-hp tractor.

Couple this with EGR, and boost will be available at as low as 1200-1400rpm thanks to the VGT putting a much larger charge of air into the engine at a given time.

And, thanks to this technology says Deere, the 8320R tractor has just received the title of most efficient row-crop tractor after tests in Nebraska, like the 8430 before it.

Power boost kicks in at 15kph on the road and above 2.5kph in pto mode.

Both 8345R flagships come only with Deere’s stepless AutoPowr transmission, while smaller models can be equipped with a choice of 16F x 5R automatic PowerShift or CVT box.

By equipping its 8RT with CVT, Deere has surged ahead of both Challenger and Case IH in offering the first tracked machine with a stepless transmission.

And it’s a real luxury on a cultivations tractor, allowing the driver to set speeds from 50 metres an hour right up to 42kph (for road work) and let the engine management system do the rest.

Beneath its traditional styling, the RT is a completely different animal from previous 8030 models and bears more than a passing resemblance to the 9000-series.

Instead of the outboard planetary drives used on older models, inboard drives now mean the steering planetaries and final drives nestle neatly together.

A suspended swing-arm set-up, supported by truck-type air-bags, connects the track frame to the underbelly of the tractor. Both on the road and in the field it proved to be pretty comfortable.

The track carriage has been stretched by 254mm (10in) to enable the tractor to better transfer power to the ground, while beefier front idlers give 30% more tension, which Deere reckons will alleviate any driveline slippage.

Although fitted as standard with 3500 635mm Camoplast tracks, the model tested had the heaviest-duty 5500 762mm-wide option.

Deere describes the 5500 as a normal track on steroids, with a thicker four-laminate belt (instead of the three on the 3500) and wider traction lugs.

There are now two wing-mounted fuel tanks as well as a tank housed inside the new mid-frame, giving a whacking 758-litre capacity, 50% more than the previous model.

Track spacing can now be adjusted without the need for slackening off the tracks. All that is required is for a few bolts to be loosened off and a forklift used to shunt the tracks in or out.

Linkage lift has also been increased from 8.5t to 11.6t to pretty much match that of the wheeled machine, which can also be fitted with a front hitch with a lift capacity of up to 5200kg.

Cabs are expensive things to change. Deere’s previous 8030-series cab came out in 1994, and it reckons this new cab has swallowed nearly $40m of investment.

But the wait has certainly been worth it. Climb up the five wide steps and you’ll soon want to get yourself comfortable in the sumptuous leather seat.

What seems like acres of glass surrounds you (7% more, says Deere), and the wasp-waisted bonnet leaves plenty of scope for front visibility, too. There’s a more mellow feel too, thanks to light brown and grey colour trim.

It feels comfortingly familiar, too, despite the major changes, and within half an hour or so you feel as if you’ve got at least part of the way there in understanding how to operate all the gadgets and gizmos.

The first thing you’ll notice in the cab is that the right hand console that used to be home to things like hydraulic settings and four wheel drive controls has now completely disappeared.

All controls now nestle neatly in the re-designed CommandArm.

A 7in colour display, which is clear and easy to read, is navigated by a neat roller to the side.

The home page can be set up to the operator’s preferences and there are a series of hot keys to navigate straight to commonly-used settings.

When you get into a bit of a mess, you can always click on the aptly-labelled home button (it’s decorated with a picture of a little house).

Also located on the CommandArm are all your spools, linkage controls and further back things like air-conditioning, stereo, lights and more are all grouped in a neat button arrangement.

Having been criticised for their lack of storage, the boys in green have stuck cubby holes and cup holders in every conceivable nook and cranny.

Great for putting things in, but when your phone rings it’s a job to remember which one it’s in.

Once accustomed to the new armrest controls, it’s pretty straightforward getting both beasts to work.

Using the familiar AutoPowr speed controller, select the F1 slot and dial in your desired forward speed using the roller on the side.

Once the corner post shows the speed you reckon you’ll be needing, nudge the hand throttle forward and let the engine management do the rest.

A 12m Vaderstad Carrier 1225 was our chosen weapon of choice for the field test and, although Vaderstad reckons this beast needs between 370hp and 490hp to pull it, both tracked and wheeled 8345s handled it – just.

The extra boost at low revs certainly seemed to be working for its keep. Even on damp, challenging Oxfordshire soil, both seemed to relish the challenge, the tracked machine coming into its own on the looser land.

Shod on 650/ 85R38’s, the wheeled machine coped but was a better match for Vaderstad’s 4m TopDown.

Once the desired speed was achieved, engine revs drop back to a more sedate 1900rpm.

Both tractors were fitted with AutoTrac, which made things incredibly straightforward. O

nce you’ve made the headland turn, simply push the toggle switch in the middle of the CommandArm and it picks up your line and gently twitches the tracks (or wheels) until you’re on line and soon notching up the acres.

Headland turns can also be programmed in using the iTec Pro function, however turning a crawler around is far more fun yourself.

Steering is characteristically light on the track-layer, yet it doesn’t take long to get to grips with how much it takes to turn.

Both tracked and wheeled 8Rs are packed with enough technology to give Bill Gates the jitters.

Yet Deere has managed to keep things simple enough for drivers to jump in and get on with the task at hand.

For those keen to get the most out of their investment, the new CommandArm is incredibly intuitive to use.