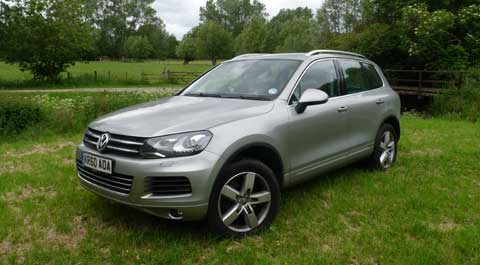 There’s no doubt the Touareg Hybrid is more fun to drive than its diesel cousin and it does offer a sizable fuel saving over pure-petrol models. But the eye-watering £58,000 price tag makes it very hard to justify.

Depending on who you listen to, fossil fuels will last another 10 or 2,000 years. Whoever’s right, using a combination of petrol and electricity to power cars has be a more sustainable option, hasn’t it? Oliver Mark got behind the wheel of VW’s Touareg Hybrid to find out.

Anyone who has wandered the streets of a city suburb will have probably taken cover from at least one angry-looking Staffordshire bull terrier. Well, bumping into the steroid-laced VW Touareg Hybrid has a similar effect. With its dropped-jaw grille and hawk-like lights, it looks mean and aggressive, but there’s something unusual about this particular beast – it can drive in silence.

That’s because buried in the spare-wheel bunker in the boot is an expensive 288v nickel metal-hydride battery and there’s a 47hp electric motor sitting between the petrol engine and transmission.

Steady trundling in traffic can be handled by the electric drive, but more serious work is taken care of by the supercharged six cylinders.

Switching between the two is controlled by a disengagement clutch, but they can also be run together. With the electric motor and engine combined, the Touareg has a ferocious 380hp and 580Nm of torque.

In electric-only mode the engine is switched off and disengaged from the automatic gearbox to avoid any drag torque loss. The battery should store enough energy to drive an emission-free 1.2 miles at up to 31mph.

It works in a similar way when coasting. Lift your foot off the throttle and the engine will turn off and the rpm pin drops to zero – a little disconcerting at first, but you soon learn to love it (mainly because it’s costing you nothing to run).

When braking, the electric motor acts as a generator to charge the battery.

Back to our friend the Staffy. Lean a heavy right foot on its toe and it’ll probably growl. The same principle applies to the Touareg – it will pull away with reasonable gusto with a steady foot on the throttle. Stamp on it and things get altogether less civilised – a cacophony of growls and barks as the brutish V6 fires up.

Flat out, the book reckons 149mph is possible and 0-62mph in a roaring 6.5 seconds. Top speed comes in sixth gear, but VW has equipped it with an extra two gears (eight in total) to try and get a grip of fuel consumption at cruising speeds. Shuttling up the eight gears comes with CVT-like smoothness, too.

It should make an ideal towing vehicle. And with 440Nm of torque and 333hp from the V6 alone, it’ll do the donkey work even with 3.5t hooked on the back. It also gets VW’s always-engaged four-motion four-wheel drive.

You don’t lose any driving quality by buying bigger, either. For a bulky machine it’s well mannered and handles some twisting A-roads with reasonable grace.

It takes a light foot to get going without a jerk, though. We also found it slow to respond, particularly when you put your foot down after coasting in electric mode. That’s because it takes time for the engine to start and reach the required rpm, then the transmission has to work itself out, which often means dropping down umpteen gears.

No. The transmission is as power-hungry as Robert Mugabe, so even if you try and take it steady, there’s no chance of getting consumption above the stated 34mpg.

At best we managed a combined 27mpg and the more time you spend at speeds above 30mph, the worse it’ll get.

You could argue that consumption is better than a rival petrol-only machine (which, most of the time, this is), but its “greenness” is questionable. There’s the cost and energy of producing the big battery to consider and the eye-watering cost of replacing it.

It’s smart inside and out. Well-managed bulk and smooth curves mean this car will look just as at home in Chelsea suburbs as dragging a cattle trailer through a sodden field.

There are nice touches of chrome and walnut veneer around the dash (but, importantly, it looks nothing like a Rover). There’s also an easy-to-fathom eight-inch screen that can display the flow of power through the car.

The off-road settings are engaged by a knob on the dash and you get a host of helpful-sounding systems. Trailer stabilisation and hill descent control in particular make it a far more competent off-roader than its SUV cousin, the Tiguan.

VW don’t expect the Hybrid version to be a big seller – the three-litre TDI Touareg will account for half of all sales. And we’d opt for that one, too. The numbers just don’t stack up for the hybrid – at £58,305 it’s exceptionally expensive to buy and to run. In fact, the TDI is more than £16,000 cheaper, which could buy you a serious amount of diesel.

However, if you’re a fully-certified petrolhead and you want to hit 60mph in 6.5 seconds, the hybrid might cost you less to run than a petrol alternative.