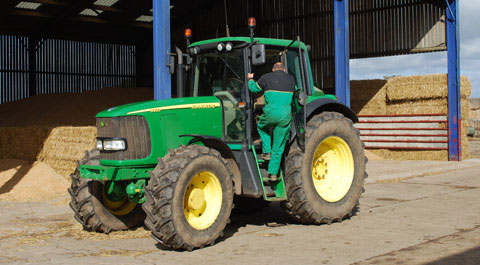 The John Deere 6920 and 6920S were top selling models in the 150hp category for Deere, which replaced them with the 6930 tractor in 2007. Today with prices for the last of these top gun 6020 Series tractors dropping to below £30K, they offer the potential buyer a great deal of tractor for relatively little outlay. But are they worth buying?

Overall, I would certainly say our two 6920s have been very good tractors. They have plenty of power and can handle almost anything you throw at them, as long as they are well maintained. COLIN FISHER

In many respects the John Deere 6920 was the Noughties equivalent of the ubiquitous Ford 5000: A versatile, do-it-all tractor strongly favoured by arable farmers and contractors alike. Indeed, during the model’s six year production run, John Deere sold 4,867 in the UK alone.

And with so many still in service, there are plenty of good post-2004 models for £25K-30K to choose from.

The JD 6920 (150hp) and 6920S are for all intentions, the same tractor, albeit with different horse power ratings and specifications of equipment.

Both are powered by the same 6.8-litre, six-cylinder turbocharged engine, which in post 2002 (Tier II) models featured high-pressure common-rail injection and a four-valve cylinder head. The 6920S tractor featured an electronic power boost that increased power to 160hp (MAX).

The standard transmission used in the 6920 tractor was the Powrquad Plus 20F/20R, a simple to use, 40Kmh unit with four power-shift speeds in each of five mechanical ranges.

The 6920S tractor came standard with the upgraded AutoQuad II unit, which featured a switchable fully automatic mode. John Deere’s (IVT) AutoPowr transmission was also available as an option in the 6920S.

All three transmissions were available in 50Kmh specification and an optional economy mode was available on Autoquad equipped tractors.

Three farmers were asked their opinions on the John Deere 6920 and all three acknowledged the tractor is powerful, versatile and on the whole, very reliable. John Deere’s Triple Link Suspension system for the front axle was highly praised as was the tractors generous lift capacity and the performance of the external hydrualics.

From the operator’s point of view, the John Deere cab was stated as providing a comfortable working environment with well placed controls, although the cab was crticised for having limited storage space.

Another noted criticism was the propensity for the Grammar air suspension seats, runners to fail, and, that the Powrquad shift buttons mounted on top of the gear lever quickly wear out.

Colin Fisher of Lindley Hall Farms Ltd in Nuneaton, Warwickshire owns two 6920 tractors, (2004 and 2005 models) both equipped PowrQuad Plus 40Kmh transmission and both with more than 6000 hours under their belts.

Both tractors have been used for ploughing, heavy cultivation and PTO work, trailer work, fertiliser spreading, spraying and muck carting. In general, both have proved confident performers, however Mr Fisher is keen to point out that there are some weak points to be aware of.

“The exhaust system heat shields always rattle and both our tractors needed replacement stack pipes within 4000 hours.” He continues “Another problem that both our tractors developed at around 5000 hour’s was that they would start and then immediately stop.

This was caused by the deterioration of the plastic fuel pipe that supplied the fuel pump, which had become porous.” he says.

“Cross-shaft wear on the rear linkage noticably accelerated when the tractors were used for heavy draft work, which resulted in the inability to maintain level link arms.

Another problematic area has been the pick-up hitch locking pin mechanism. The bolts retaining the housing are prone to coming loose and frequently need checking if a potential disaster is to be avoided.”

From the perspective of daily maintenance the 6920 is well praised, a single one piece bonnet lifting to reveal the air cleaner and radiator pack, which features removable debris screens. One area of maintenance that cannot be ignored is the brakes. Dirty backend oil is the only indication that the brake pads are worn out and ignoring this, in time, can be catastrophically expensive.

“Our 2004 tractor has performed flawlessly over the years,“ says Mr Fisher who has just purchased a new 6150R to replace it. But the 2005 tractor did have some transmission problems and had to have the gearbox re-built at a cost of £2,500.