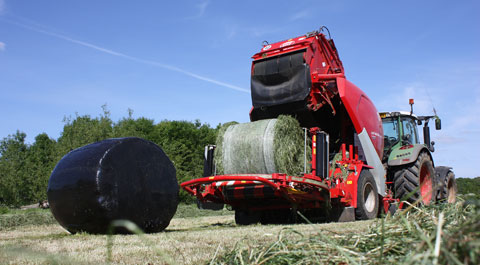 Moving to a one-pass Lely baler-wrapper has revolutionised one Gloucestershire contractor’s round-baling work. Nick Fone found out why.

Seven years ago the Kidner brothers set up a contracting business serving the dairy and beef farmers of north Somerset, Gloucestershire and west Wiltshire.

As the eldest, for several years Matt had been running his own John Deere 6920 for another contractor but in 2005 the opportunity came up to buy a neighbour’s Welger RP520 round-baler and take on his round of regular customers.

Since then that business has grown massively and now provides grass, wholecrop and maize silage services as well as muck-spreading and baling. Although the operation’s baling work now has four New Holland big square balers at its core, round-baling is still an essential part of the business’ offering.

“When we started out the round-baler was the key machine but we quickly realised we needed to offer more,” says Mr Kidner.

“First it was a square baler and then people wanted their grass and maize chopped too, so we took the plunge and bought a New Holland FX40 forager.

Having us on farm for that, customers then started to ask about other work so we bought two muck-spreaders and another square baler to try to offer a more complete service.

“But it was the round-baling and wrapping on which we’d built our name and which is still a core part of what we do.”

Until two years ago the Kidners were running two Welger round-balers with a McHale wrapper trailed behind one for silage. But there has been a distinct trend among the region’s farmers to move to big square bales because of their higher density and the fact that most farms now have a loader capable of handling these heavier packages.

“At one stage we were doing well over 20,000 round bales a year which meant we needed two balers.

“However over the last five years we’ve seen a significant shift away from rounds and we’re now down to about 16,000/year.” 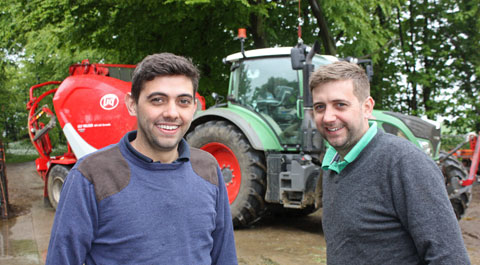 Last spring Mr Kidner started to look for a high capacity machine that was capable of handling his entire workload single-handedly. A dedicated baler-wrapper combination was the obvious choice.

“At the Grassland UK demonstration in 2010 we had seen various baler-wrappers working but at the time it was only the Lely Tornado that was able to produce and wrap bales of varying sizes.

“That’s very important to us as some customers want bales under 4ft high while others want 6ft monsters. While there are plenty of belt balers out there that can do that, finding a combination machine that can net and wrap them isn’t so easy.”

So last after a demonstration in 2011’s late first-cut grass crops, the Kidners took the plunge and ordered a Tornado in time for delivery at the start of the 2012 silage season.

“We looked at our options and the costs but because we have to have a variable chamber machine we were limited on choice. It was either the Tornado or a separate baler and wrapper.

“That would have been a backwards step and price wise, coming in at about £52,000, the combination cost about the same at two standalone machines.

“We know the Welger is a reliable machine that produces decent dense bales and so we knew what we were getting.”

Being based in the rolling countryside that surrounds Bath and with customers stretching up into the Cotswolds, the Kidners have to deal with some fairly steeply banked fields. Running a trailed wrapper behind the baler was less than ideal for this sort of ground.

“With the McHale hitched up to the Welger things could get a bit tricky on the banks. You had to have your wits about you all the time,” explains Johnny Kidner, the main round-baler operator.

“With two separate control boxes you had to get the timing just right, opening the tailgate and operating the wrapper. With the Tornado you don’t have any of that worry – the whole thing is completely automated so when you come to a halt it tips the wrapped bale off before letting the next one out of the chamber.”

With an integral steel ring that raises around the outside of the twin-satellite arms’ orbit, bales ejected on slopes cannot roll off and are held in place until the driver considers it safe to release them.

Generally however, everything is automated and when the Tornado is working in straw the otherwise redundant wrapper table is used as an accumulator, enabling bales to be dropped in pairs for easy field clearance.

Having the baler-wrapper hitched up to the Kidner’s Fendt 724 has proved a particular success.

“The Vario CVT gearbox makes life so easy. I have it set so that when the baler buzzer goes off, I nudge the stick across to the right and the tractor goes into active standstill.

“The table tips the wrapped bale off, the net goes on to the one in the chamber and then the tailgate opens to release it onto the wrapper. Then I just push the Vario stick forward and we’re off again.”

Generally in a medium first-cut crop of grass the rig will run at around 10kph-14kph. But bringing the baler’s 25 knives into work to chop the crop cuts that by half.

“We don’t have many customers that want the full chop but even using half the knives really slows things up,” says Johnny.

“At full pace in nice big fields I can bale and wrap 80 bales an hour. My best day so far was just short of 700 bales in ten hours including time for field changes and reloading with film. I only had to stop because we’d run out of grass.”

In terms of the packages it produces, the Kidners are happy with the even density and shape, although because the bales are 75mm wider than a standard bale, edge-to-edge net does not quite reach across the shoulders.

But minor niggles like this are easy to bear when the overall boost to throughput is taken into account, according to Matt.

“There are obvious savings in labour, fuel and machinery by going to a baler-wrapper but that’s only half the story. By freeing up a tractor and man, it takes massive pressure off the silage gang, especially if we’ve got square balers out working too.

“Also the fields aren’t run on as much and in certain places last year it meant we could pick up grass which we would otherwise have had to leave to rot.

“Rather than going into wet fields with a rake, forager and trailer leaving massive ruts, we just whipped round with the Tornado on its 700mm wide tyres and barely left a mark.

“It’s probably the best purchase we’ve ever made in terms of improving output.”

1. With the chamber full, the tractor stops, the wrapper satellite arms lift and the previous bale is tipped off the wrapper table while the net is applied to the next one. 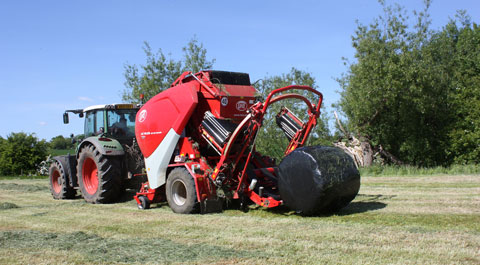 2. With the wrapper back in place, the tailgate lifts and the new bale rolls on to the table. 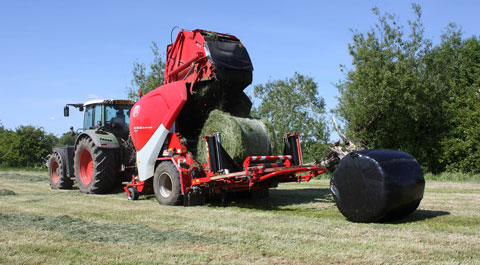 3. Once the tailgate is shut the tractor moves off and the wrapper table spins to apply film to the new bale.