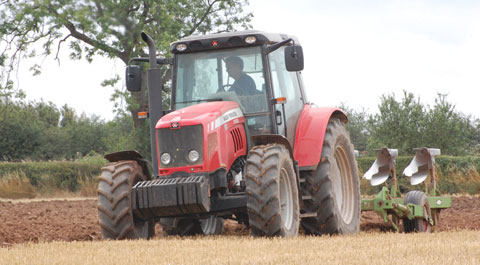 The price of new tractors is heading into the stratosphere, so buying a used tractor for half the price is an appealing prospect to many medium-scale livestock and mixed arable farmers.

In this feature we take a look at the MF 5465 Dyna-4, a versatile six-cylinder middleweight with plenty of ability for surprisingly little cost.

It’s been eight years since Massey Ferguson introduced the 5400 Series a mid-sized range of tractors featuring five models, the largest of which was the six-cylinder MF 5465.

Rated at 120hp (87 KW) the MF 5465 featured a turbo-intercooled Perkins 1100 Series engine, mated to a 16/16 Speedshift transmission with a Forward-Reverse shuttle feature and a two-speed powershift.

In 2007, MF updated the 5400 Series, re-styling the range and fitting a quieter cab. The 5465 now featured a larger 6.6-litre Tier III engine and came as standard with Massey Ferguson’s electronically controlled Dyna-4 transmission.

While it was no longer the most powerful 5400 Series model, it remained the largest six-cylinder tractor in the 5400 Series line-up.

While the appeal of a six-cylinder 120hp tractor may arguably be over-shadowed by the improved fuel economy offered by similar specification four-cylinder tractors, a used MF 5465 Dyna-4 does have a lot to offer.

Prices for a decent four year old example start around the £25K mark – great value for a mid-size machine that offers a 5000Kg lift capacity, lower link sensing, integrated front linkage and one of the most advanced transmission systems available in this horsepower category.

Procured primarily to handle the farms heavy chores, including muck spreading, fertilizing and mowing, the tractor is also used to operate a Krone Vario-Pack 1500 round-baler, producing a combined total of 5,000 bales of silage, hay and straw each year.

“Yet because the six-cylinder engine has so much torque, I can comfortably run in Economy 540 PTO on jobs like baling, even in heavier crops. This means I can go for two days on one tank of diesel (150 litres) which is a big cost saving at the end of the day.”

The Dyna-4 transmission is controlled by a T-Bar lever on the operator console, which performs not only the four power shift speeds in each range, but, at the press of a button, the clutch less shifts between each of the transmission’s four ranges.

Initial concerns with the shift quality, particularly when changing between ranges, prompted Paul to consult his local AGCO dealer, however tests revealed the transmission was operating correctly.

“One thing I dislike is when you are operating in reverse, the shift pattern on the lever is also reversed.” adds Paul. “This can be very confusing particularly if you are using a PTO implement such as a feeder or straw chopper and are constantly manoeuvring or looking behind you in a confined space.”

Having spent most of the 3250 hours showing on its clock covered in cattle manure, Paul’s tractor cosmetically, remains in good condition, the paint showing only minor scratches with no sign of rust around the front grill – a common ailment in early 5400 models.

The cab interior too remains surprisingly intact and with the doors shut, it provides a quiet and comfortable environment highly praised by its owner.

Problems experienced with the MF have included a leaking fuel pump and a broken hydraulic line – which rendered the tractor inoperable – in addition to a broken door hinge, broken foot steps and a broken battery box, all of which were repaired under an extended three year warranty program which Paul purchased with the tractor.

What I like about this tractor is that come rain or shine, hot or cold, it starts on the button. It’s certainly not without its faults and I don’t think I would buy another brand new one. As long as you know what your getting, a decent second hand one would be a good buy at the right price.