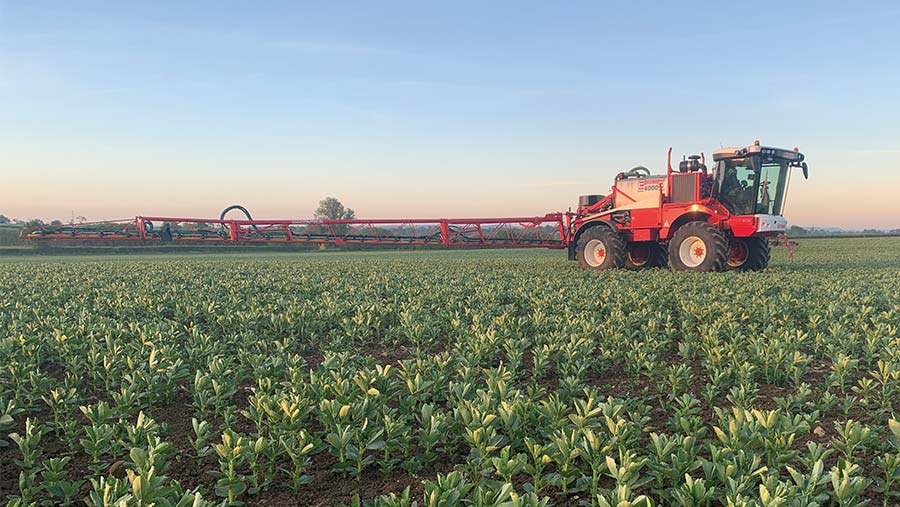 Matt Fuller, winner of Syngenta’s Farm Sprayer Operator of the Year competition for 2020, gives us the lowdown on his Bateman RB35 fitted with Capstan’s pulse-width modulation system.

He works for Heathcote farms, managed by Farmers Weekly’s 2019 Farm Manager of the Year Andrew Robinson. 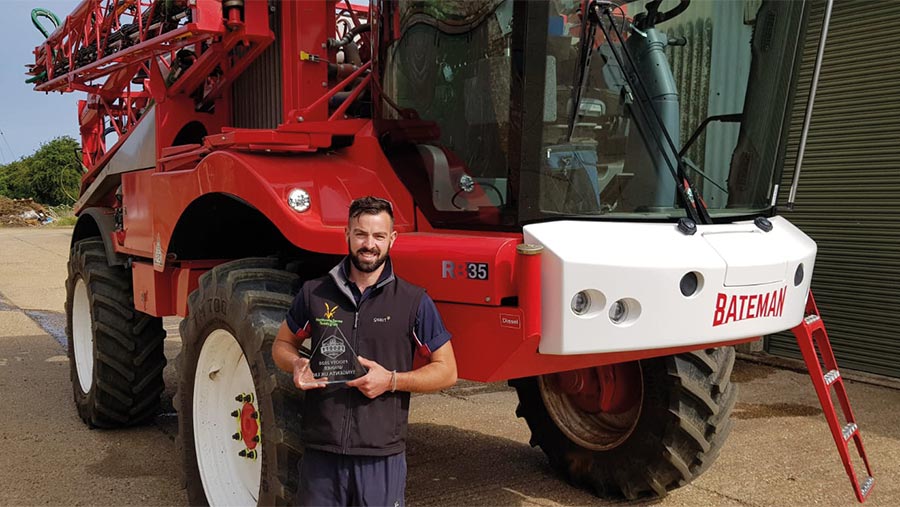 Prior to signing the deal, we also demoed Horsch, Amazone and Chafer machines but, aside from Horsch’s boom, there wasn’t much to split them and Bateman’s back-up over the years has been second to none.

It was priced competitively and the resale market is strong, so it should be easy to move on when the time comes.

The biggest decision was to spec Capstan’s Pinpoint pulse-width modulation system. At roughly £25,000, it was a significant expense, but we’re hoping to see returns through chemical savings and yield improvements.

It’s all about marginal gains – some of the SDHI tank mixes we’re applying are really expensive, so we’ve already started clawing back that initial investment.

So far, we’ve saved 1-2% on our annual chemical bill and managed to even up some of the headlands using turn compensation and individual row shut-off to eliminate overdosing on the inside corners.

This has been particularly noticeable in oilseed rape crops, as they’re no longer stunted after applying post-emergence residual herbicides such as Kerb and Astrokerb.

Similarly, we’re not underdosing around the outside, which means those parts of the fields are suffering far less from disease and weed pressures.

We also use the system to apply variable rate plant growth regulators and trace elements through the pulse-width modulation (PWM) lines and it means we can be pickier about pressures and droplet sizes, giving us more consistency in less satisfactory conditions.

The reality is that no one has a clear answer on the true savings that PWM can offer, but our experience so far suggests it was worth going for.

The single-nozzle shut-off makes driving a bit more relaxed, but I have spent a lot of time researching nozzles to make sure I’m selecting the right ones to suit target droplet size, pressure and water volume. In fact, I decided to focus on this element of PWM during my Basis qualification.

Other spec upgrades include a pair of auto grease systems for the chassis and main boom pivots, and a 3in fill line for liquid fertiliser. This has almost halved the loading time and means I can manage an extra fill each day.

We also went for taller wheels, which put an extra lug on the ground. The upshot of this is that I don’t have to swap to the 480 row crops so early in the season and I run them at as low a pressure as I dare. Usually they’re around 1bar – any less and the sprayer tends to sway around a lot. 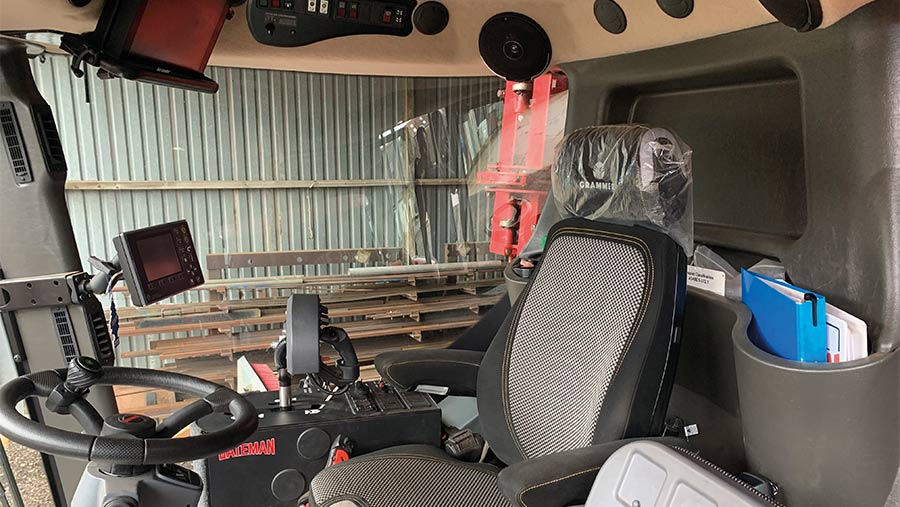 It’s been pretty trouble-free so far. The only problem was with the Deere engine, which suffered with blocked filters due to the biofuel content of our diesel.

At one point, we were changing them every 150 hours but, after putting finer filters on the main diesel tank, the sprayer has clocked 250 hours without any problems. None of the tractors on the farm suffered the same problem, but they all have older engines.

Originally, we had Norac boom levelling, but it was upgraded over the winter to Bateman’s BBL system. The process essentially involved adding a couple of extra dampers on the centre section and it travels much better now.

It’s more than accurate enough for our land, though I reckon Horsch’s BoomControl setup would still have the edge on really hilly ground.

The other big improvement from the old machine has been the switch from lightbar guidance to Ag Leader RTK. We already had it on the two Quadtracs and combine and it’s brilliant.

The InCommand screen shows all the spray information and guidance, while Capstan’s monitor displays details relating to overlap, turn compensation and spray pressure.

It has been particularly handy as we drill our tramlines, which pays dividends when travelling over wet fields in autumn – last year being a prime example. However, it does result in green crops along the wheelings, so our current system includes a Roundup spray pre-combining.

The Bateman is also quite a bit lighter than some of the competition – it weighs the same half-full as the Horsch unladen.

That’s part of the reason why we stuck with the 4,000-litre capacity, rather than going up a model to increase tank size. Though the bigger tank would have benefited us on the liquid fert side, where our standard rate is 250 litres/ha, it would have limited workloads when ground conditions are poor.

For lower-volume sprays I can still cover plenty of ground – up to 200ha/day at 100 litre/ha where I can travel up to 16kph, albeit at the top end of the duty cycle.

As for comfort, the newer cab is a lot quieter and I’ve gradually got used to having no back window. The blue boom lights have been a really handy addition, especially as we do a lot of liquid fertiliser in the dark – sometimes over a 24-hour slog.

I can easily see the spray pattern, which isn’t always obvious with the standard lights.

Chemical is stored on the farm, but we’ve got water sources at all the sites that we work at, plus bowsers and a home-built spray trailer (below), so it’s rare to have to travel on the road with chemical in the sprayer tank.

The trailer carries all the chemicals, IBCs for manganese or magnesium, cabinets for jugs, a water pump and mixing bowl, as well as a draining rack and bin.

This means I seldom use the induction hopper on the sprayer, instead running straight through the 3in feed hose using Bateman’s higher capacity pump. 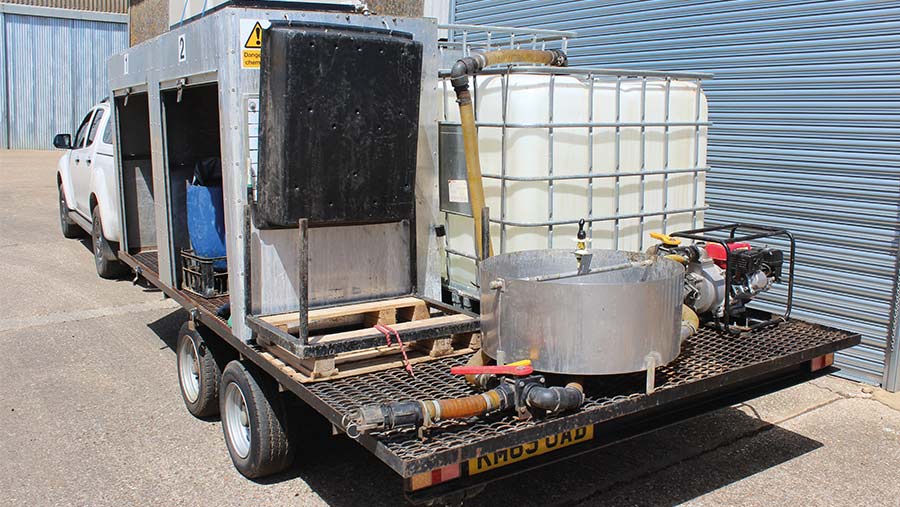 There’s also an IBC biofilter system at the farm that cleans the washings before they are irrigated on nearby land.

Another member of the team helps me move the trailer and bowsers – we have several ranging from 9,000 to 20,000 litres – to each site, the furthest of which is a 200ha block eight miles away.