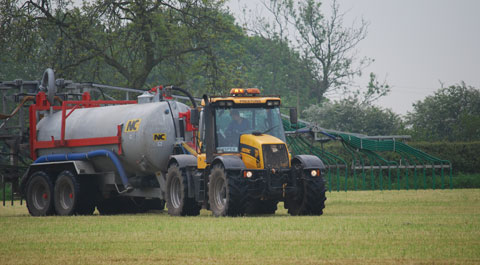 I would certainly consider buying another Fastrac. Arguably, they are not the best cultivation tractors, but ours have worked extremely well.

You get a lot of tractor for the money and for what they cost to run and the amount of money they save in terms of travelling speed, I’d say they’re pretty hard to beat.

The JCB Fastrac 3185 is a high-powered tractor designed that was designed to operate with equal prowess in the dirt or at high-speed on the asphalt.

Today, with prices for clean examples dropping well below £25,000, a second hand JCB 3185 could be the perfect tool for those who require a fast-paced farm hauler.

The JCB Fastrac was an established force in British farming by the time the JCB 3100 models were introduced as a replacement for the JCB 65 Series in 1998.

Power to the tractor’s four 540/65 R30 tyres is handled by a three-range transmission with 54 forward and 18 reverse gears. There are six-speeds in each range with three clutchless powershift speeds in each gear. A switch-activated auto shift feature can also be engaged to control the powershift changes automatically.

The 3185 Fastrac’s coil sprung heavy-duty axles feature outboard planetary gears with diff locks front and rear. Steering is via the front axle, while stopping power is provided by an air-over-hydraulic brake system that operates disc brakes on all four wheels.

Preston’s Agricultural Contractors in Desford, Leicestershire is a large scale contracting operation with an armada of machinery that includes almost 20 tractors.

Mr Preston says the 3185s are ideally suited to heavy haulage work and his spend most of their time towing trailers, muck spreading and hauling slurry.

Tractor operator Richard Illston has driven Mr Preston’s 2002 Fastrac since it arrived at Desford in May 2011, adding 3,400 hours to the tractor’s hour meter in just 18 months.

Besides hauling grass and maize during the busy silage season, much of this tractor’s time is spent on the front of the farm’s 15,900-litre slurry tanker.

“This tractor works really hard. It’s moved more than 4m gallons of slurry in the past year,” says Richard. “The tractor’s stability on the road is remarkable. I can pull the tanker at 65 kph, without experiencing any of the bouncing or pitching I get at 50kph with a conventional tractor. 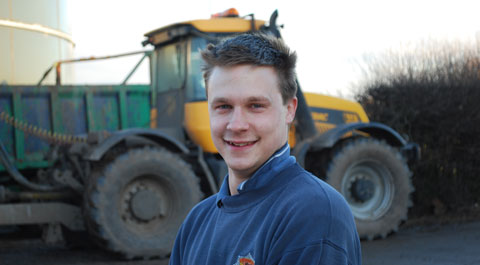 Richard Illston drives a JCB Fastrac 3185 for Preston’s Agricultural Contractors in Desford Leicestershire. His employer Adam Preston rates the firm’s two JCB 3185s as pretty hard to beat when it comes to slurry and muck handling

Tractor driver Richard Illston says the 3185 has been a good machine, but it does take some getting used to. “Some operators find it very difficult to reverse a trailer, because you are not sitting over the rear axle. It can also be awkward to attach implements to the linkage.”

However, the cab is very roomy and it has a comfortable driving position, he says. “But it is a little noisy when the engine’s working hard, though, and the air conditioning is only just adequate if it is really hot.”

It also takes a while to master the gearbox, but there are plenty of ratios to keep the tractor moving, whatever the conditions, he adds. “I’ve heard people criticise the Fastrac’s performance in the field, but it will pull through anything if you know what you’re doing.”

Servicing is not the tractor’s strongest point though. “Access to the filters is restricted because of the wheels and greasing the main drive shaft underneath the tractor – which must be done regularly – can be quite difficult and messy,” he says.

Another design niggle is the fact that the air intake pre-cleaner ‘mushroom’ is located in the middle of the bonnet. This means when hauling silage it quickly gets blocked by falling grass or maize coming from the harvester (which collects around it) resulting in dramatic power loss.

The headlights are also easy to break as they are mounted on the front bumper, he notes.

Additionally, the necessity to double-dip the clutch when shuttling backwards and forwards can become tedious, particularly in situations where a quick manoeuvre is required.

Richard reckons his JCB 3185 burns an average of 180 litres/day of diesel. He rates the brakes as very good and states the brake pads will easily last 3000 hours, or more, providing the brakes on the trailer/tanker behind it are kept well adjusted.

Tyres are expected to last no more than 12 months, although regular rotation can extend this period, as the rear tyres wear significantly faster than the front. Major mechanical problems, while not regular in occurrence, have included a blown head gasket (£1500) a broken gearbox main shaft (£3,500) and a bent selector fork in the transmission.

Overall, Mr Pearson says he would consider buying another. “Arguably they are not the best cultivation tractors, primarily because it’s hard to see the implement behind you. But ours have worked extremely well, particularly in the slurry and muck aspect of our business. You get a lot of tractor for the money and for what they cost to operate and the amount of money they save in terms of travelling speed, I’d say they’re pretty hard to beat.”

More from our driver’s view series: