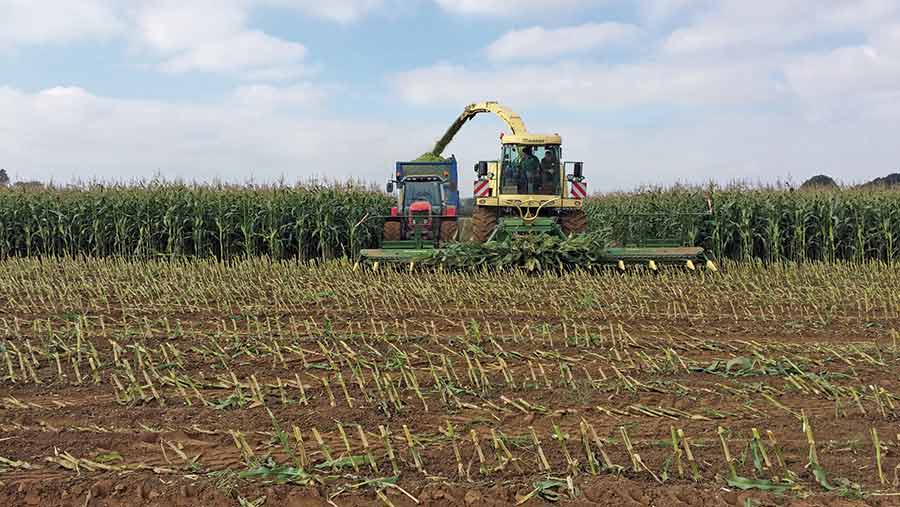 With new forager prices close to £500,000, it’s worth putting in some research before pulling out the chequebook. And who better to review a machine’s merits than its owner?

Nick Fone gets the lowdown on a two-year-old Krone BigX 700 from owners Bob Strange and Will Nutland, Wiltshire.

Keen to place more focus on reliably producing decent-quality forage, 18 years ago Wiltshire farmer Will Nutland saw an opportunity to collaborate with neighbours to set up a shared silage syndicate.

Initially the fledgling venture set out down the Claas route, investing in a Jaguar 695. Pretty quickly demand for the service grew and that first machine was swapped for an 860 model. That was followed by an 880, an 890 and in 2008, a very early 950.

“We had had exceptionally good service from our local Claas dealer, Mill Engineers, but when the 950 got into maize, things started to unravel,” explains Mr Nutland.

“Being a really early machine, it wasn’t quite right. It was great in grass, but we had a frustrating maize harvest with the hollow cylinder constantly stuffing up. Krone came in with a demo BigX 650 at just the right moment and put together a good package.

“At the same time local ag engineer Simon Barnes had been appointed as our dealer – I had good faith in him and that clinched the deal.”

Sticking with a two-year replacement policy that had worked well in maintaining a balance between depreciation and reliability, a couple of 700 models followed and this season; the last of those will be superseded by a brand-new 770.

Maximum output from the BigX 700 can get up to more than 80ha/day in first-cut grass, but generally working days are kept sensible.

“Having 700hp under the hood is really an insurance policy – we know we have the output if we need it when the weather closes in,” says driver Bob Strange.

“Given the conditions of the past few seasons, we wouldn’t have got round first-cut without it.”

Bob Strange (left) and Will Nutland

The big MAN motor was initially tight and felt sluggish compared with the 650’s Merc block, but after 400 hours of bedding in it began to sing and 1,200 hours in, it’s flying.

Having Krone’s Varistream spring-loaded back-plates on the back of the impeller and underneath the drum is reckoned to do a good job of smoothing out crop flow in lumpy swaths and the anti-blockage system is a real headache saver.

When engine revs drop below 1,300rpm, it kicks out the feed roller and header drive to stop any chance of a blockage.

Having six feed-rollers is believed to be a big contributor in presenting crop evenly to the chopping cylinder and smoothing out engine loading.

The other less obvious advantage is that there is a greater distance between the metal detector and the blades, so the chance of anything nasty getting through is minimised.

They also do a good job of crushing and flicking out stones in Wiltshire’s flint-rich soils.

The cab on the 700 is felt to be a big improvement over the 650, being markedly quieter and offering significantly better views out to the sides – critical when the 12-row maize header is hitched up.

“All three BigXs we have had have been very reliable – the build quality is one of the major selling points,” says Mr Nutland.

“We have never had an issue that has stopped us running and Simon Barnes is out at any time of day or night to sort any problems.

“The 90deg feed-roller gearbox was so well guarded, you couldn’t see when a seal had gone and it had dropped all its oil. That was sorted with a heavier-duty box replaced under warranty and it hasn’t been a problem since.”

“Getting the corn cracker shifted is a pain. Unlike other machines, it’s not just a case of rolling it in and out,” says Mr Strange.

“Instead it has to be winched in from underneath. If you are swapping between grass and wholecrop it’s a real chore.”

Although the Bosch hydrostatic transmission employed on the 700s is much smoother getting up to 40kph on the road than the 650’s Poclain set-up, it is still not the best for inching.

“Coupling up and dropping off headers can be tricky, partly because of the narrow hitch points, but also because the hydrostatic transmission is hard to control at inching speed,” explains Mr Strange.

Having to engage the chopping gear just to raise or lower the pick-up hitch is a slight niggle. As it blocks the bonnet, drivers have to remember to leave it down at night if they want to check the oil in the morning.

The 12-row EasyCollect maize header gets top marks for the job it does, but it has a couple of weak points.

With chains rather than rotors used to gather the crop to the feed rollers, in thin crops small cobs can end up dropping to the floor rather than being gathered in with the plants.

Contour-following could also be improved. Height sensors on the outer wing sections do a good job on flat ground, but without a central sensor the header can end up scalping in the middle where there are significant lumps and bumps.

“Despite this it is by far the best header we have had for simplicity. The way it folds flat for transport is also great for visibility – much safer than any other make.

The chunkily built cam-less grass pick-up has never given an issue and, with a central depth wheel, faithfully follows the lie of the land.

Would you have another BigX?

“Of course we look around – we tried Fendt’s Katana last year, but it didn’t measure up. It was too complicated and I don’t like the idea of going back to an in-line engine with 90deg gearbox,” says Mr Nutland.

“Going on the build quality and reliability of the Krone forager and our four-rotor rake, we have gone for the new 770 this year. Having a three-year warranty and finance package makes for a pretty attractive deal.

“However, the most important thing is the back-up and with Simon Barnes we couldn’t be any better looked after.”