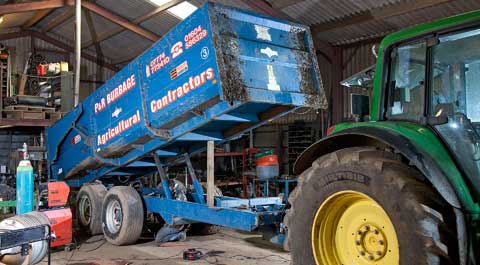 There are some adjustments you can make to trailer brakes that help keep them legal and won’t break the bank but this time, we suss out some of the more sophisticated add-ons that will help them exceed these limits and keep your tyres in good nick too.

With extra braking power, you’ll probably find the wheels lock up when the trailer is empty, so you’ll pull up at junctions looking like an act from one of Paul Daniels’ magic shows, enshrouded in smoke.

One way round this is to fit a load-sensing valve which will vary the amount of oil sent to the brakes, depending on the weight in the trailer.

This opens the valve right up, allowing the maximum flow of oil through to the brake rams. Once the trailer is emptied, the lever is pulled back to its bottom position, shutting the valve down so that oil flow is restricted and hopefully the wheels won’t lock up.

GES Hydraulics and JH Milnes also supply a load-sensing valve which can be fitted either between the axles or on the drawbar for trailers without full beam axles.

But installing and setting up a hydraulic load-sensing valve is a tricky business. Watch the video to see how it’s done.

One of the key issues with trailers failing brake tests is that adjustment is rarely a straightforward task.

The ring-ends on brake levers that encircle the splined camshaft are often seized solid and require heat or the gas-axe to be persuaded otherwise.

Clambering underneath axles like some sort of contortionist limbo-dancer isn’t a particularly attractive proposition, especially when the trailer has been on muck-carting duties. So the end result is that the brakes rarely get adjusted.

To ease this situation, slack adjusters can be fitted in place of the standard brake lever. Incorporating a ratchet or worm mechanism, a tweak of the adjuster nut rotates the lever around the camshaft when the brakes need sharpening up, removing the need to re-position the lever on its camshaft splines. 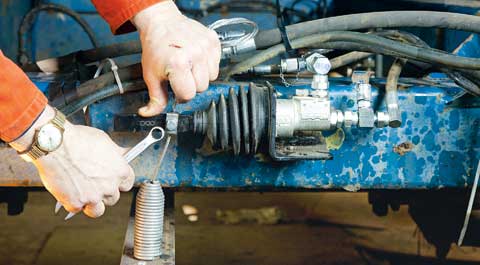 If you’ve got a decent trailer with some pretty crummy brakes and you want to upgrade your stopping power then new axles might be the answer.

For between £2,500-£3,000 you’ll get completely new running gear with big brakes, new suspension, S-cams, chunky rams and even air-brakes. It might also mean you can fit bigger, wider rubber.

Whether six, eight or ten stud, standard ag-spec axles are most often fitted with flat-cams to push the shoes out against the drums. While they work ok, they tend to have an on or off effect with little in between.

The S-cams more commonly found on commercial grade axles are more progressive and will help in keeping the wheels from locking up.

All this expense and time has to be justified though. Spending a big wedge of cash on new axles might not be worth it on a twenty-year-old wheelbarrow but with new trailer prices creeping up towards the £20,000 mark, it might just be worth considering. 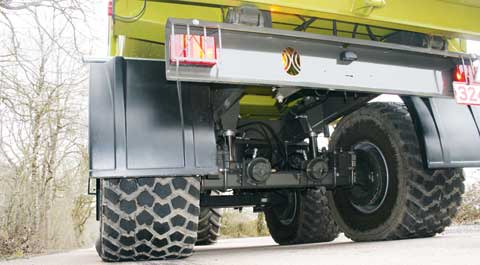 In partnership with a company called Turnkey, dealer organisation Bagma has developed a brake tester that requires no special kit to operate other than the simple BrakeSafe box, plonked on the floor of the tractor cab.

Effectively a deccelerometer, it measures the forces that come into play when the anchors are applied.

By plumbing the trailer brake line into a spool-valve it’s then possible to measure what the braking efficiency of that trailer is, independent of the tractor.

The oil jetting out of a spool valve is typically at much higher pressure than what comes down the brake lines so a restrictor valve and pressure gauge are used to provide a more realistic braking force.

There’s been some criticism of Bagma’s BrakeSafe test and in particular the oil pressure the organisation tests the trailer brakes at.

While an average 130hp tractor will typically put out 110-140bar (legally it must be between 100-150bar) at the trailer coupling, Bagma restricts oil at the spool-valve to 100bar.

With the brake plumbed up and the tester box in the cab, it’s then simply a case of setting off at a steady pace (target speed of around 30kph), using the hand throttle to keep engine revs at a steady 1,800rpm, therefore maintaining an even oil pressure.

Once up to speed the driver then dips the clutch and pulls the spool lever, bringing the whole rig to an eventual halt. It’s noticeably slower than normal without the aid of the tractor’s brakes.

Down in the footwell, in a series of whirrs and bleeps, the BrakeSafe box does its maths and then comes up with a figure for braking efficiency and spews out a supermarket receipt-sized printout to prove it.

But the fun’s not over yet. To get a true figure for that trailer’s stopping power the man in the white coat has to do a clever calculation that takes the weight of the load into account. That way if the trailer’s not loaded up to the max it’s still possible to generate an accurate picture of just how well it would stop if it was. 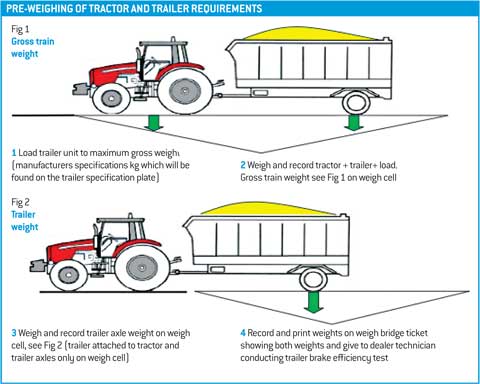 The whole exercise of getting a trailer through the Bagma test is a bit of an eye-opener, not least when you start to look at just how much you can carry.

Legally the total weight of tractor, trailer and load can’t exceed 24.39t but there’s also a restriction on what a standard tandem axle (unbalanced) drawbar trailer can weigh – 18.29t.

On top of that, the load on the axles must not exceed their rated carrying capacity which, in the case of our 12t Marston, totalled 13t.

Time at the weighbridge, then, is well spent.

With all this information you can then ensure the trailer is correctly freighted for the test.

During the course of Bagma’s braking survey, its testers began to realise just how many trailers’ rated weights didn’t match their axle carrying capacity.

Although you might have a trailer plated to carry 12t, if it weighs 5t empty but it’s axles can only handle 13t and 2.4t on the drawbar then you’re taking a risk when loading it up to the max. Something well worth checking when you’re buying a new one.

However the critics argue that this provides an unrealistic picture and more trailers fail the test than they would if they were tested at a higher pressure.

Clearly oil pressure has very little impact on stopping power and isn’t the limiting factor when it comes to poor brakes. 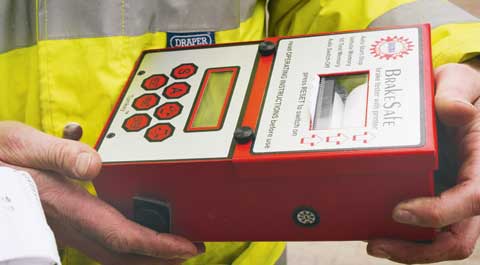 A bit of a playground scrap has developed between the tractor manufacturers and trailer makers with the tractor boys blaming those in the trailer camp for under-speccing brakes and consequently over-loading the tractor.

Whether legal or not, the truth is that we are all carrying heavier loads at faster speeds and the kit involved needs to be engineered to handle that.

While trailers undoubtedly need to have heftier running gear, tractors need to get up to speed too. If we’re honest the basic design concept for in-board tractor brakes hasn’t changed since late sixties Masseys. While they were expected to last the life of the tractor then that’s not the reality today.

In-board brakes are difficult to get at and costly to replace. Nobody wants all that muck and rubbish from the brakes getting swirled around their transmission like a solitary sock on spin cycle. Isn’t it time tractor makers looked again at simpler to maintain out-board discs? If they can work on JCB Fastracs why can’t they work with other machines?

Regular maintenance will help to keep kit up to scratch but it seems like we’ve been buying tackle with sub-standard brakes for years now.

While trailer makers have their part to play, legally it’s up to the person buying and running the machine to make sure it’s up to speed for running on the road.

In the hope that the law will soon change and we’ll be able to carry heavier loads at more than 20mph, we’ve come up with the spec we believe you should specify as an absolute minimum to make sure your new trailer is easy to maintain and will sail through any sort of safety checks.

As an example a 14t trailer expected to travel at 40kph should have:

To be fully future-proofed go for air-brakes with ABS. Not only are these more progressive but they’re quicker disengage because the air is dumped out of the actuator and doesn’t have to travel back up the pipework.

In addition, the air lost from any leaks is instantly replenished and there’s a built in fail-safe should anything go wrong.

Any future law changes for heavier weights and faster speeds are likely to require a minimum 45% braking efficiency, ABS and a twin-line fail-safe set-up – all features generally found with air rather than hydraulic braking systems.

NB – Buying a trailer with “commercial, 10-stud axles” does not necessarily mean it’s a high-spec, high speed machine. Check with the manufacturer exactly what size shoes, rams and pipework are used.

By definition a commercial brake should use S-cams, while ag-spec stuff generally has flat-cams to push the shoes up against the drums.