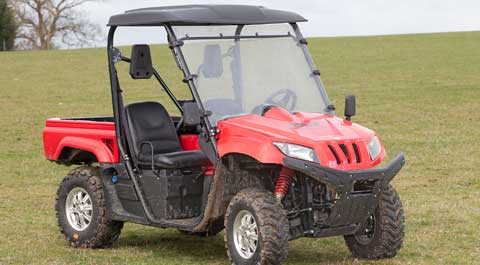 The eBear is a credible alternative to a diesel-powered utility vehicle and can do a good day’s work on a single charge.
The light construction means it’s probably not the best bet of heavy-handed operators and it carries a hefty price tag.
Watch the video and read the full report below.

The slightly ‘bling’ appearance is a bit of a giveaway that the eBear was originally designed for the leisure and amenity market, but is does come with a towing hitch and can carry a 500kg pay load.

Northumberland-based custom vehicle manufacturer Avid started producing the eBear a year ago after 18 months on the design table. So far two models have been sold and there has been interest from the United Utilities, Olympics, EDF Energy and Welsh Water.

The eBear’s neat little chassis is covered with fairly tough red plastic panels and it bears a striking resemblance to the diesel-powered Cub Cadet.

Another feature it shares with the Cadet is the twin bucket seat arrangement, rather than the bench most manufacturers opt for. Though comfortable enough, there is no chance of squeezing in a third passenger.

Build quality isn’t the best on test and the tailgate on the tipping rear body is a tad flimsy and we didn’t dare sit on it. We also found that tipping it back fully caused the rear light cluster wiring to snag on the tyres – driving along with the body up would almost certainly end in tears.

On the plus side the load area is nice and low for getting heavy items in and out.

Eight caravan-style batteries are shoehorned into the eBear’s chassis to drive its twin electric motors. Although weighty, the batteries’ bulk is well distributed because they are mounted under the seats, slap bang in the middle of the chassis.

There was ample power to pull a full Logic feed hopper up hill and down dale – even in high range – though it did take edge off the performance.

Unlike the Polaris’ single monster motor and prop shaft arrangement, the eBear uses two smaller units. The rear motor sits behind the seats and drives the rear wheels via a fixed differential, while the front one nestles under a plastic guard between the seats. This motor is slightly smaller and sends power thought a selectable differential, switched via a button on the dash.

We tried our best to flatten the Avid’s batteries and after a long day’s work and a bit of unfair treatment we did manage to beat it.

The test started off trying to simulate an average day’s work, but as the boredom set in we took to trundling up and down the steepest hill we could find with all the lights on.

This sapped the power fairly quickly and eventually it was reduced to crawling speed. But even when we thought it would give no more there was still enough juice left to let us limp back to the yard.

A battery life indicator comes as standard and is incorporated into the dash-mounted LCD display – we found it was a bit misleading though.

Charging is simple once you’ve mounted the transformer box in a convenient building. Just park up, plug the five-pin plug into the socket on the side and you’re away. Overnight charging is advised, but you should be able to give it a significant boost if you pop back to the yard for lunch.

Starting the Avid is a bit of a performance. You have to turn the key, tap in a security code on the dash and press the green start button. Foot on the brake, you press the forward or reverse button, stand on the accelerator and you’re off.

This gets irritating after a while, particularly as you don’t want to leave the ignition switched on and risk flattening the batteries.

Once you’re up and running though, driving the Avid is blissfully simple. Standing on the accelerator sets you off with a jolt that’s considerably swifter than most diesel buggies and it quickly reaches its top speed.

At low speeds the motors and transmission barely make a sound, but as you gather pace it makes a fairly load whirring noise that, not unlike that of a milk float.

Other than the handbrake, which is so close to the dash you skin your thumb when you grab it, the controls are perfectly adequate.

Pressing one of three chunky alloy buttons selects forward, neutral or reverse and holding them down for a couple of seconds switches between hi and low range. But in practice, you’ll rarely need to engage low range, unless you’re heavy towing.

All electrics are controlled via a blister pad on the dash and there is an LCD display for speed and battery life.

Steering is manual, but relatively lightweight, despite the weight of the batteries on board and the fat BKTW tyres.

• Separate battery in the front panel for start-up and lights.