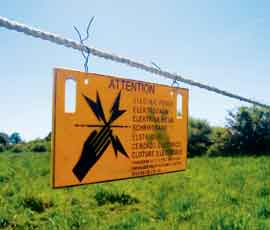 Using electricity to discourage livestock from wandering beyond their rightful boundaries is not new – far from it. But today’s modern systems are more reliable and efficient than their forebears ever were.

Now there are, for example, “intelligent” systems that can detect electrical loading, vary pulse rates and activate an alarm when malfunctioning. There are also systems that can be set to control specific classes of livestock and ones designed for permanent or temporary use.

Electric fencing may have come of age, yet, within its electronic innards, the way it produces pulses of high voltage electricity remains fundamentally the same.

Back to basics – how an electric fencing system works

What might be considered as the engine of electric fencing is the energiser, which, as its name suggests, provides the power for those muscle-grabbing electric shocks that most of us will be familiar with – intentionally or otherwise.

These pulses of electricity are generated by a capacitor that comprises parallel metal plates separated by a non-conducting material. This arrangement allows them to store power just as a battery does but, unlike a battery, the capacitor is able to dump all of its stored electricity in an instant – usually through a transformer that boosts the voltage. When discharged, the capacitor is recharged to repeat the cycle.

Jarring and uncomfortable as it is to receive an electric shock from an energiser unit, it is not in any way considered to be harmful, despite delivering a pulse of up to 10,000 volts, albeit at a low amperage.

While we’re talking about electrical units, here’s a reminder of what the different figures signify:

• Volts indicate, essentially, the amount of pressure behind the flow of electricity that pushes the energy along the fence wire.

• Ohms is the measure of resistance in the wire – small diameter conductors, such as those in poly wires and tape, have a high resistance while larger diameter high tensile wires have lower resistance.

• Joules is the amount of energy available to be pushed down the wire by the energiser and is the measure of the shock felt by the animal.

• Amperage is the measurement of electrical current felt when a shock is received – the higher the amperage, the more intense is the shock.

Concerns that manufacturers were introducing energisers that were too powerful and could, in some circumstances, be potentially harmful has led to new standards being imposed by the European Committee for Electrotechnical Standardisation.

A12 energisers can produce a maximum output of 15 joules but they must have the ability to reduce the power to a safe level if there is a sudden change of load that could indicate an animal is trapped in the fence. These energisers are known as TDEFE or Time Delayed Electric Fence Energisers.

The less powerful A11 energisers can have a maximum output of 5 joules and 20A peak current when a load of 50-500 Ohms is placed on the output terminals.

An example of the new A12 intelligent energiser is Rutland’s mains-powered Intelligiser, which is designed for use when permanent electric fencing is erected.

With a TDEFE energiser, the fence line load is constantly monitored, and when a sudden load change is detected, the unit waits before it increases the power to allow any person or animal trapped in the fence to free themselves.

After this time, the energiser operates in Boost Mode – ie no alarm with high output and normal pulse rate. This provides the power to work against heavy vegetation that may be shorting out the system. When the vegetation is removed or any other cause for the heavy load, the energiser returns to normal operation.

The Rutland ESM Intelligiser energiser is available in four versions – the most powerful being the 5500i, which, where there is no vegetation to get in the way of output, is claimed to be good for up to 100km of fencing.

Rutland is not alone in developing the intelligent energisers, which is no surprise bearing in mind the introduction and mandatory requirement of the A12 standard. Both Hotline and Gallagher also have energisers that comply with A12 requirements. Gallagher, for example, has its I-Series mains energiser range, which is new for this year and allows remote control of fences at a distance.

While energisers are clearly a key part of an electric fencing system, they can’t do the job on their own. An important part of all electric fencing is for it to have a good earth and not having a good one is the prime reason cited by manufacturers for fencing equipment failing to work effectively.


For an electric fence to work it needs to complete a circuit from the energiser terminal, which connects to the wire, to the animal that touches it and then into the ground courtesy of the animal’s hooves and then through the ground to the earthing stake that is connected to the energiser’s other terminal.

Earthing stakes – and you may need to have more than one – are usually made from galvanised steel and are up to 2m long.

Testing the earthing ability of a fencing circuit can be done by shorting the fence to ground about 100m from the earthing stake using a metal bar and then measuring the voltage passing through the ground with a voltmeter.

One wire from the voltmeter is connected to the earthing stake and the other is pushed into the ground. A reading of more than 400 volts indicates that earthing needs to be improved – usually by adding another earthing stake.

The aim is to create a fence that has a minimum of 3,000 volts passing through it. While the length and type of wire used will have a bearing on the type of energiser used, vegetation in contact with the fence will allow electricity to ‘leak’ to earth.

Selecting the right energiser also depends on the class of stock being controlled – cows, horses and pigs are relatively easy but sheep and hens, with their insulated coats, require higher voltages to be effective.

Most electric fence manufacturers say that wherever possible, mains power energisers should be used. There are no batteries to worry about and, properly set up, they allow the whole farm to be controlled from a central point.

Rutland, for example, offers a range of solar panels for use with its rechargeable battery-powered energisers and says that, depending on the amount of sunlight, the batteries may need occasional charging from a standard charger. Even so, if the thought of lugging a heavy battery halfway up a mountainside is too much to bear, then solar panels may be the answer.

Wind-powered chargers are also now offered by several manufacturers. Compact units mounted on posts, these turbines start generating in winds of 6mph, have a peak output of 12 amps at 33mph and can help maintain battery output for longer periods.

If you are worried about the security of the battery and energisers, they can be locked in a metal box, which itself can be made live when the energiser is switched on. An insulated key allows the user to open and close the box.