This year’s complex category in the Farm Inventions Competition offered up some high-tech items that required a serious level of planning and workmanship.

Our contenders include a brace of drilling rigs built on a shoestring budget and a cheap-to-run bale wrapper trailer. 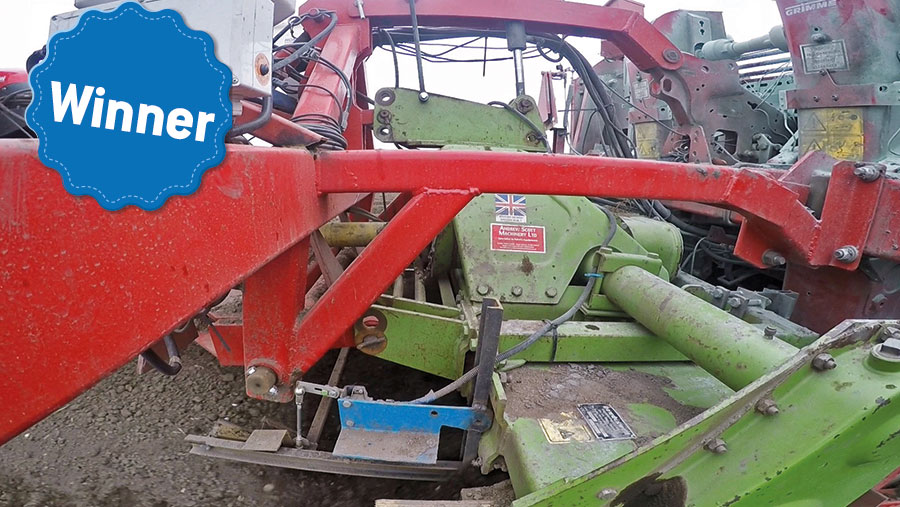 He found moving too much soil diluted the nematocide and moving too little meant the roots weren’t protected, so the priority was to find a way of keeping the working depth consistent.

The basis of his new system was to be a rotor spike purchased from a dealer in Shropshire, which he mounted directly in front of a Grimme GL 32T potato planter already on the farm.

The rotor spike’s sole purpose is to mix the nematocide into the soil at the correct depth – about 20cm.

His first design used a couple of depth wheels attached to either side of the rotor spike, but these gave inconsistent results.

Instead, he decided to invest in a potentiometer to control the height, which was wired to run through Massey Ferguson’s Total Implement Control system in the Datatronic screen.

A small ram – controlled by the potentiometer – was added to connect the spike to the new frame that surrounds it and a new set of skids were added, too. These follow the beds and set the rotor spike at the required depth.

Mr Webster did all the work himself (with some help from his sons), including the reconfiguration of the Datatronic software.

Now all the work is completed, the depth can be set in the cab and the potatoes are planted exactly where the nematocide has been mixed to the required concentration. 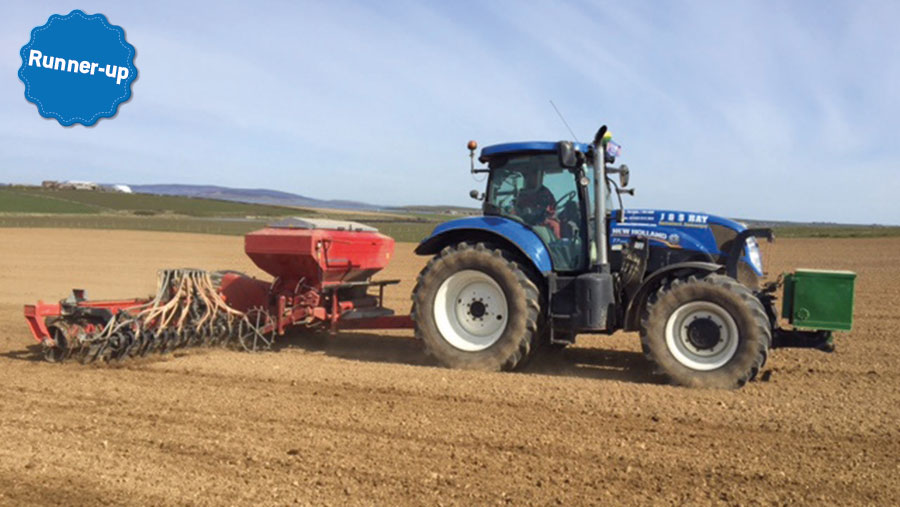 Up until two years ago, Marty Hay of Orkney based contractors J&S Hay used a time-consuming and expensive four-pass method to establish his wholecrop silage mix.

This included separate passes with a both a cereal drill and Accord grass seeder, both of which were followed by a run through with the Cambridge rolls.

But in a bid to speed the process up, he decided to come up with a machine that could do the whole job in one. After acquiring a set of 6m Cross Engineering Cambridge rolls and a new 1,900-litre Nordstine split hopper, he set about grafting them together, with the help of his brother Duncan.

By lengthening the drawbar on the rolls they created enough space to mount the hopper and began routing the pipes for both the cereal seed and grass seed.

Cereals are planted first using a row of spring tine coulters, and the grass seed is broadcast behind via a series of deflector plates. Some light tines then tickle soil over the grass seed before the roller consolidates the seed-bed.

The hopper’s 60:40 split makes it ideal for the two types of seed and it can also be used to sow seed and fertiliser.

Mr Hay reckons the drill has cost about £25,000 to build and modify over the years, but it is now the main drill with the 4m Vaderstad playing second fiddle.

He pulls it with a 150hp New Holland, covers about 80ha/day and only uses about half a tank of diesel in the process. 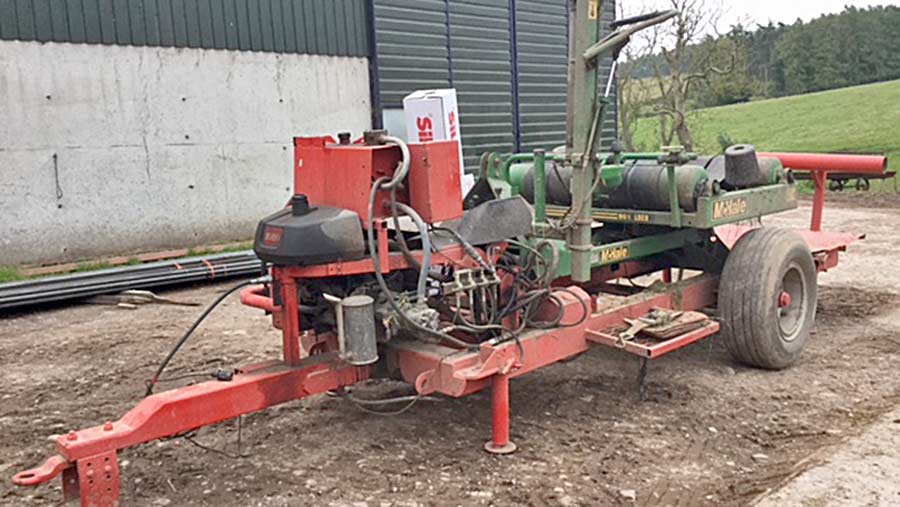 He started out by taking his existing three-point-linkage mounted McHale wrapper and bolting it to an old feed cart chassis. This had been extended at the rear to hold wrapped bales once they had been tipped off the table.

To power the rig, he used a three-cylinder Perkins diesel engine and hydraulic services from an old Toro grass mower. The mower’s hydrostatic drive motor was used to power the wrapping table itself and he tapped into the former steering circuit to power hydraulic jacks on each corner.

These allow him to get the unit perfectly level before starting to wrap. To help take out the bounce when bales drop off the wrapping table he also fitted a hydraulic handbrake.

The four hydraulic jacks were bought new at a cost of about £100 each and about £200 worth of extra steel was used to lengthen the chassis for the wrapped bale to drop on to.

The engine unit and hydraulic services set him back about £250. The whole project took about a week to make and cost just over £1,000 in total.

Now it’s completed, Mr Don tows the unit around behind his Manitou removing the need for an extra tractor and driver. It also offers a massive fuel saving with the 20-litre tank capable of wrapping more than 500 bales.

Once in the field or yard, the wrapper can be set up and ready to use in less than five minutes. On average he wraps about 58 bales/hour with it. 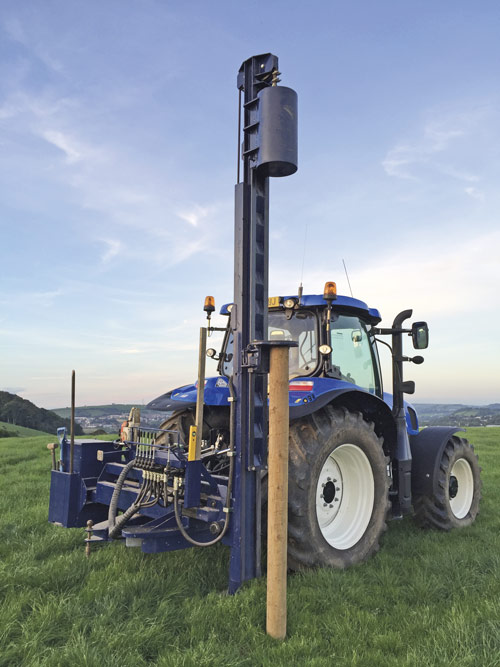 When he was looking to replace his old Parmiter post knocker, Carmarthen dairy farmer Rhodri Thomas went in search of something a little heavier duty.

But with prices for the machine he wanted hitting the £10,000 mark, he decided to build one himself. Taking a few ideas from existing machines and adding a few of his own tweaks, he set about putting it together.

Mr Thomas used all new steel for his design, which included a telescopic mast that tilts in four directions, side shift, back shift and a pair of hydraulic legs. The weight itself is 400kg and was an offcut of a large-diameter bar sourced through his steel supplier.

To make sure he has easy access to his tools while out on fencing jobs, he fitted a chainsaw carrier, large toolbox and holders for a bar, sledgehammer, shovel and spirit level. He also added a towing ball so he could hook a flatbed trailer on the back for carrying stakes and wire.

With all the steelwork in place he took the machine to his local hydraulic parts supplier, Davis Harries and Co in Whitland, where they helped him fit the spools and pipework.

Mr Thomas built the machine over the winter in 2015 and fitted it around other jobs. In total it cost about £3,000. 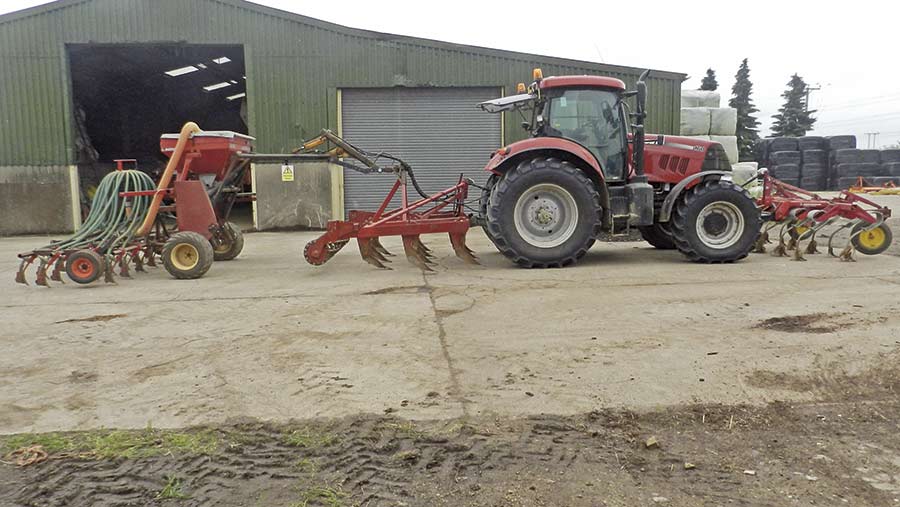 Having a chunk of his ground let out for potatoes each year means Doncaster farmer Phil Lodge is used to some less-than-ideal autumn planting conditions.

In 2013, his post-spud land resembled a “tank training ground” with deep, wet ruts making it far too ropy to be tackled by the farm’s trailed Lemken Solitair drill.

The only solution that year was to iron out the bumps with an old Bomford Superflow, broadcast the seed on the surface and then power-harrow it in.

After that, he experimented by mounting an Accord hopper on top of the Superflow, before heading to the workshop in 2015 to come up with a more permanent setup.

By scavenging parts from different machines tucked away on the farm he came up with a one-pass wet-weather drilling rig, which would be attached to the farm’s Case Puma 160.

This tractor was picked for its decent power-to-weight ratio and the 650mm tyres were dropped to as low a pressure as possible to reduce soil damage.

On the front linkage, Mr Lodge mounted a 3m Kongskilde Vibroflex to help do some initial leveling and balance the machine out without having to use a weight block

The trusty Superflow was then hooked on the rear linkage and a bridge link was constructed to tow a lightweight seeder unit behind.

This was built using an Accord hopper mounted on wheels with a three-point linkage toolbar at the rear to hold four rows of eBay-sourced Weaving tine coulters.

According to Mr Lodge, the combination works well, pulling out most of the compaction and establishing a crop that looks as good as those drilled by the Lemken come summer. However, it does look a bit patchy to start with.

“The Lemken drilling looks perfect on emergence, but with my rig it looks terrible for weeks due to the uneven sowing depth,” he says. “But after a few weeks it evens out and looks acceptable.”

The outfit looks “a bit scrappy” due to being built of whatever Mr Lodge had laying about the yard and because it’s still under development, no paint has been applied.

In fact he’s just found some parts off an old sprayer mast lift, which he will be modifying to fit. 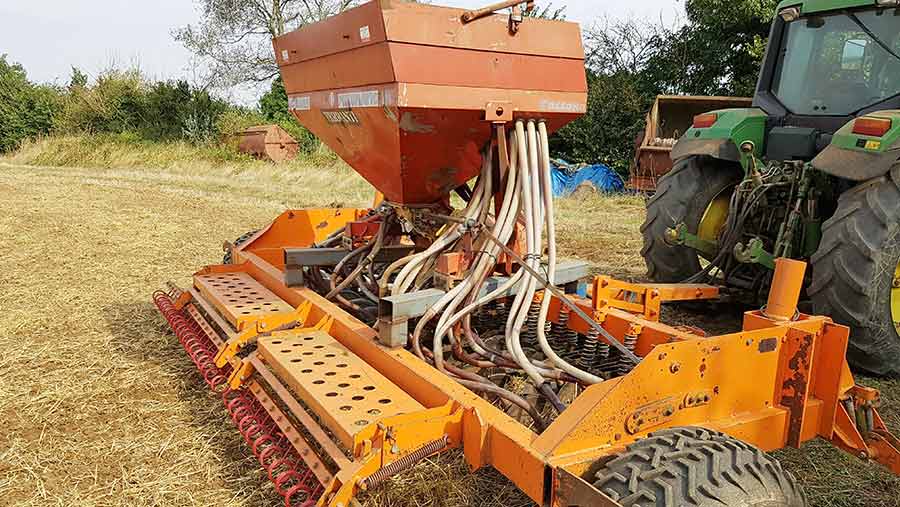 Oxfordshire farmer Andy Corner knocked together his own drill for just £250.

The outfit is the amalgamation of two scrapped seeders – an old Bettinson direct drill he landed in exchange for a few wet straw bales and a worn-out Accord combination.

The 4m-wide Bettinson provides the soil working section and carries a set of single disc coulters that cut a channel for the seed before a harrow tidies up at the back.

On top, he bolted an Accord hopper and rebuilt its metering system, and the modified drive was botched together from a Land Rover steering arm and a couple of steering joints.

Rather than relying on cumbersome pto power, Mr Corner also adapted it to run off a pair of hydraulic motors pinched from an old feeder wagon.