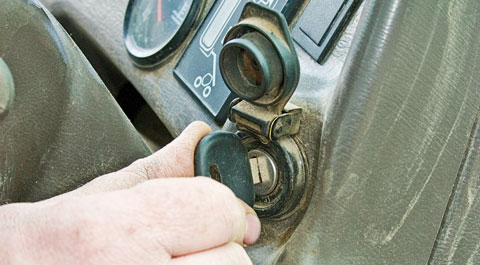 When a twist of the ignition key brings no churning from- below, is the problem in the starter or outside it? In this, the first of two articles, we’ll step through simple tests which will show where the trouble lies with a high degree of certainty.

But we will stop short of stripping the starter motor to fix it; for many farms an exchange unit is more cost-effective, particularly in a busy time. Before getting into stepwise testing it’s worth trying a few simple things first.

You can sometimes find a problem with only eyes and fingers. Most of the connections in the starter circuit – at the battery, solenoid, motor and earth return – are usually get-attable with a little effort. Twist and pull every connection all need to be tight and clean.

• If everything looks OK, have someone hold the key in the start position for 10-15sec. Wisps of smoke from connections or the motor are something of a giveaway to trouble.

• If the skies stay clear, try the starter again then quickly feel every cable connection from the battery outwards, and the motor itself. Some warmth is normal, but real heat suggests you’ve found a high-resistance point that is choking current flow.

As a big starter can draw about 1000A initially then several hundred amps during cranking, the supply and return paths for all that power need to be the width of a four-lane motorway, hence the fat cables.

Even a small pinch point will choke current flow and so get hot typical culprits are quickfit (ie non-soldered) battery terminals and corrosion contact between clamped joints.

• Remake the problem spot and normal service should be resumed.

Switch on your ears. Sound (or the lack of it) serves up strong clues. You might hear:

• Nothing at all. Silence suggests trouble with the machine’s safety interlock(s) or keyswitch, the starter solenoid or the wiring between keyswitch and solenoid.

• A single click. This suggests a solenoid fault or starter motor trouble. But don’t discount mechanical causes like a seized engine or starter pinion jammed in the flywheel.

• Multiple clicks. With the key held in start position, clicks cascading from fast to slow or an erratic ticking from the solenoid point to a battery that’s flat or dying. If you know the battery is 100% serviceable, the solenoid is the likely culprit.

• Energetic whirr, but engine not spun. A noise like one of those party novelties that unrolls when you blow down it suggests the starter’s pinion clutch or the engine’s flywheel has seen better days. Where trouble is inconsistent suspect the flywheel.

• Squealing or grinding from the starter, but engine turning. Collapsed bearing(s) in the starter motor.

• Slow cranking. Could be a flattening battery, poor connections in the main supply/return circuit, a starter motor fault or a mechanical problem with the engine. Use voltage testing to pinpoint poor connections.If none of these simple checks leads you to the problem, then the best thing is to work stepwise through the circuit with a simple meter. That’s for next time. 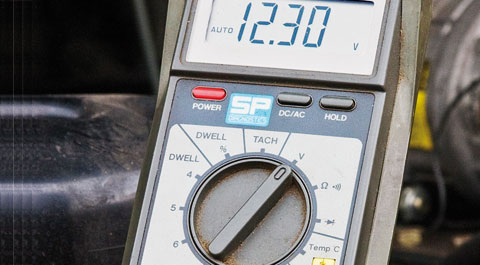 What do you need? Not much. Beyond your primary senses and spanners for all the cable connections, just a sensitive voltmeter (above) for electrical checks. Digital or analogue doesn’t matter, as long as it can read accurately to below 0.5V.

Battery test kit depends a little on battery type. To check the state of charge you will need a simple hydrometer. With a little ingenuity around the cell caps, it can serve conventional and low-maintenance designs.

You will also need a way to discover battery condition. This can be the vehicle itself (more on that here), a load tester or an analyser (below). 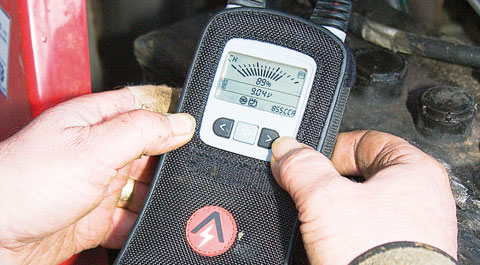 Some like to confirm a diagnosis using a separate cable to inject battery voltage directly into the circuit, bypassing a suspect component or section of wiring. This is tempting, but carries significant risks.

If you plan any informal connection, no matter how simple, please read and mark these cautions

• Before electrical connection, be 100% certain that the machine is out of gear and the parking brake is on. Forcing a starter to turn without a driver in the seat can be fatal.

• Keep flappy clothing well out the way, particularly when leaning into a vehicle engine bay. Again, sudden starter action can be lethal.

• Arrange your leads so that any high-current connection is made in the negative (return or earth) side of the circuit and away from the battery terminal, for example on the starter’s end case, an external battery post or on a bare area of engine block. Sparks can’t then trigger a battery explosion.

• If bypassing the keyswitch or other circuit items, don’t poke about with a length of live wire. Make up a fused test lead complete with its own non-latching (ie, flick-type) switch that’s safer, more certain and afterwards can go into the toolbox for another day. 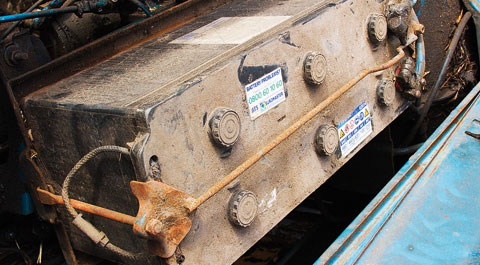 In any starting circuit the battery is the seat of power, releasing the big rush of electrical energy that the starter needs to spin an engine. Once the power unit has fired up, the alternator turns mechanical energy back to the electrical sort to refill the battery. 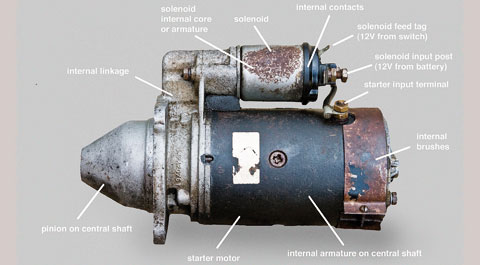 Starter circuits tend to be much the same, from tractors right down to ride-on mowers. A heavy cable takes battery current direct to the solenoid, which is controlled by a separate, fused keyswitch circuit (see diagram below). 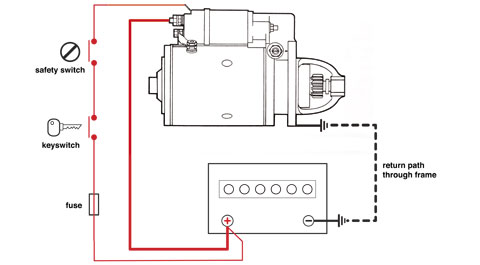 A lot of equipment makers add one or more safety switches to the clutch pedal, gearstick or seat to block accidental starting. A seat switch may operate separately on the transmission. Once any safety interlock switches are satisfied (ie, clutch pedal down, etc), turning the key to “start” lets battery voltage activate the system.

The starter itself is in two parts, the solenoid and motor. Larger pre-engaged units carry the solenoid piggy-back on the motor, smaller Bendix-type ones mount it separately.

The solenoid is a magnetically operated switch, with internal contacts big enough to handle starter motor-sized currents without burning out. It usually has two sets of windings, one to pull in the central core and so close the main contacts, the other to hold it in (see diagram).

As current flows through the solenoid’s coils it creates a strong magnetic field, pulling in the armature. In the pre-engaged starter shown here, this works a linkage to push the drive pinion towards the engine flywheel.

As the armature comes to the end if its stroke, it closes the solenoid’s big internal contacts. Some designs have two sets of these, closed one after the other. The first set powers up only part of the starter’s windings, so the drive pinion turns slowly and can slip gently into mesh with the engine flywheel.

Once the pinion engages, more armature movement closes the second contact set. Battery current then goes to the remaining windings so the starter churns with full force.

Current takes two paths through the motor on its way back to the battery. Some goes through coils around poles on the outer casing, creating strong electromagnets. The rest goes via spring-loaded brushes into coils on the motor’s central armature, turning those into electromagnets. The powerful magnetic fields around the energised magnets repel each other, kicking the starter shaft very forcibly round. 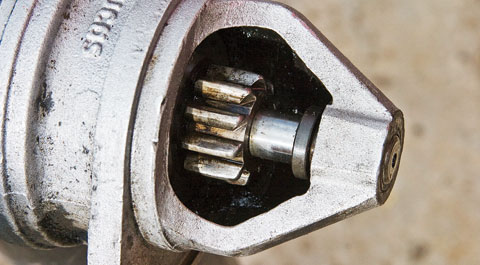 The shaft carries a drive pinion (above). Free to slide in and out and moved by linkage from the solenoid, the pinion has an internal one-way clutch.

This passes power to the flywheel until the engine starts, then disengages to stop the engine driving the starter and overspeeding it. The clutch also disconnects drive if the engine kicks back.

When the keyswitch is released, a spring in the solenoid pushes its armature out. The main contacts separate, the pinion moves out of mesh and the starter powers down.

Three flavours of starter are common in farming.

• The pre-engaged starter is the one shown here. Once universal on diesels, it is being overtaken by geared designs.

• The light-duty inertia or Bendix starter turns up on smaller, usually petrol engines. It works on the same principle as the pre-engaged variety, but uses a physically separate solenoid. A spiral gear on the central shaft throws the pinion into the engine’s flywheel as the starter begins to turn.

• Geared starters are increasingly used on petrols and diesels, providing high torque from a compact, relatively light package. Usually based on a pre-engaged design, they may use permanent (rather than electro-) outer magnets. High power comes from a faster-spinning motor torque is multiplied and speed reduced by a planetary gear set forward of the central shaft. Operation is otherwise unchanged.