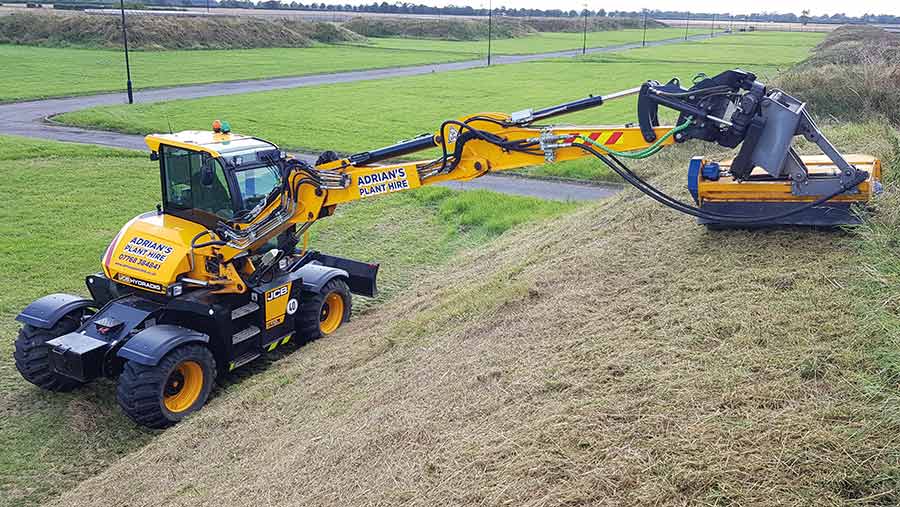 JCB’s alternative take on a traditional wheeled digger, the Hydradig 110W, has found favour with contractors looking for a versatile tool for farm maintenance operations.

Rather than being limited to land drainage and water supply works – where a muscular tracked model is probably a more suitable candidate – several Hydradigs have been converted to self-propelled hedgecutters to keep them busy year-round.

The design was developed following JCB’s analysis of traditional wheeled excavators, which are primarily aimed at building sites, road maintenance, civil engineering and other urban work.

In response, the engineers decided there was scope to minimise the size of the rotating body by locating the engine and the oil and fuel tanks in the chassis.

This would give a 360deg view from the cab to all four wheels and up to a metre beyond, so the front and rear stabilisers (or rear-mounted blade) can also be seen.

In addition to shifting the powertrain components out of the operator’s sight line, the inherent stability of the layout, with its low centre of gravity, means there is no need for a big counterweight to maintain balance.

In fact, JCB claims the Hydradig has better lateral stability than competitor machines with a conventional counterweight while also having the ability to operate in confined spaces thanks to a tail swing of just 120mm. 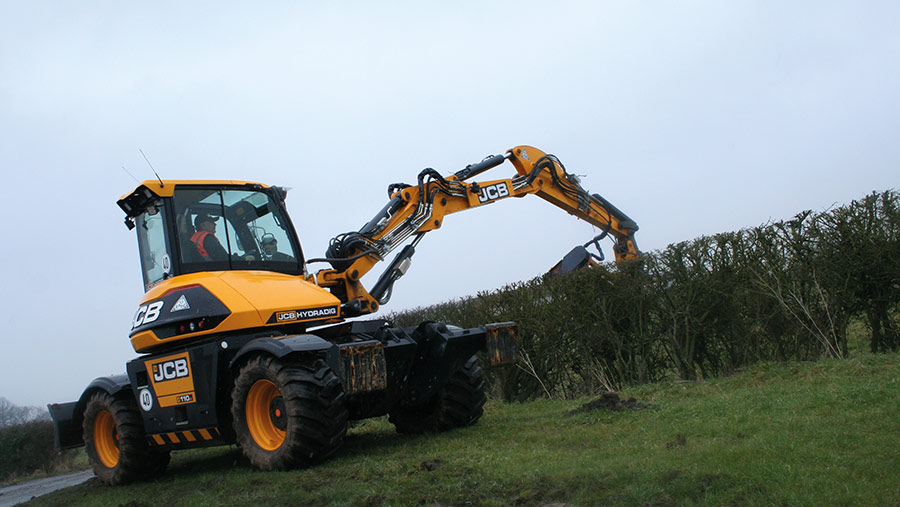 It means the Hydradig can operate a three-section boom with a choice of dipper lengths that JCB says give it greater reach – up to 8m for digging and craning – than conventional wheeled excavators of similar size.

It sits on a 2.65m wheelbase formed by two 14t-capacity axles equipped with either twin industrial tyres or a choice of singles culminating in the 550/45 R22.5 cross-ply flotations that are the obvious choice for rural work.

Packed into the space between the front and rear wheels is a 4.4-litre JCB Ecomax diesel engine generating 109hp at peak output and powering separate hydraulic systems for the ground drive and working functions.

A 72cc variable-flow piston pump provides main hydraulic power at up to 158 litres/min, and there is a choice of twin 60-litre/min or single 120-litre/min pumps providing boom end and auxiliary circuits, the latter for hydraulically powered hand tools and the like.

The hydrostatic transmission comprises a 65cc variable-displacement pump for low-speed applications, which takes the machine to an adjustable limit of 20kph and has a creep function for precision manoeuvres, and an 85cc pump for road travel at up to 40kph.

Gear pumps take care of the engine cooling fan, brakes and the steering system, which is crafted like a Loadall system to provide two- and four-wheel steering, plus crab mode.

Electronic adjustments are all performed using an in-cab 7in colour display pre-loaded with settings for different JCB attachments and capacity to add third-party items.

Two seat-mounted servo joysticks handle most control functions (the inner boom section is operated by a pedal), including forward-neutral-reverse via a rocker switch on the back of the right-hand stick.

A JCB Hydradig has revived Adrian Patrick’s man-and-machine contracting operation by creating new opportunities for employment on farms in Lincolnshire.

Having worked for a farmer and plant operator, Mr Patrick set out on his own in 2005, running a succession of three JCB 3CX backhoe loaders on construction and civil engineering sites.

But when this type of work fell away, he realised the more versatile Hydradig offered opportunities for a broader workload. 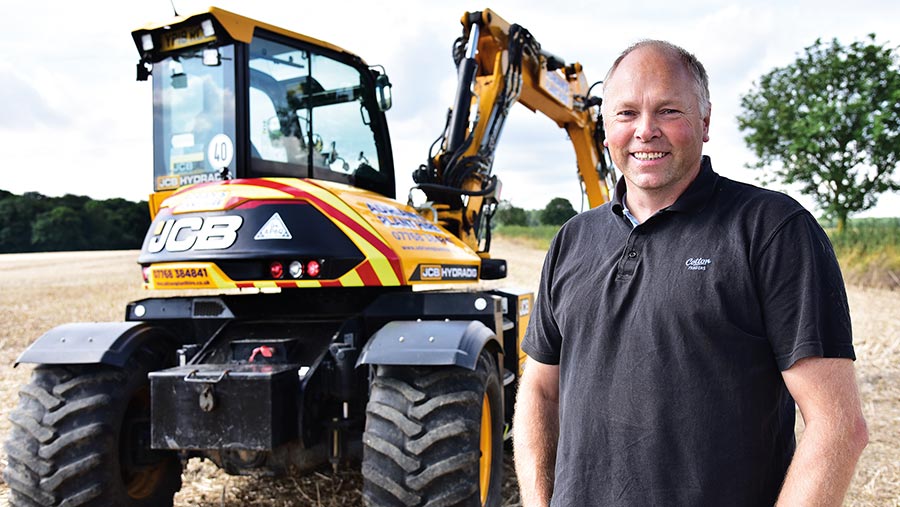 “I still carry out excavation and other civics work with the Hydradig, but it has enabled me to get back into farmwork such as hedge and embankment mowing, and ditch and dyke cleaning, so there is a lot more scope,” he says.

“I can do everything I did with the 3CX and more besides, and I can go to a farm to cut back hedges and clean the ditches with just one machine instead of a tractor and hedgecutter, and a mini digger or excavator, and so on.”

Mr Patrick did have to dig deep to buy the Hydradig from JCB dealer TC Harrison, as well as a heavy-duty boom-end manipulator.

However, he points out its greater earning potential – the machine has averaged 1,400 hours/year, which is twice what the 3CX was clocking as plant demand declined.

“I sought out work among farmers before committing to the machine and they were true to their word; it opened up so many more opportunities,” says Mr Patrick.

In addition to a hydraulic breaker for cracking up concrete and plans to get a tree shear, the biggest investment in tools was for the Steelwrist Tiltrotator X12 manipulator.

This allows a bucket or anything else on the end of the three-section boom to be turned through 360deg and angled in either direction by up to 45deg. 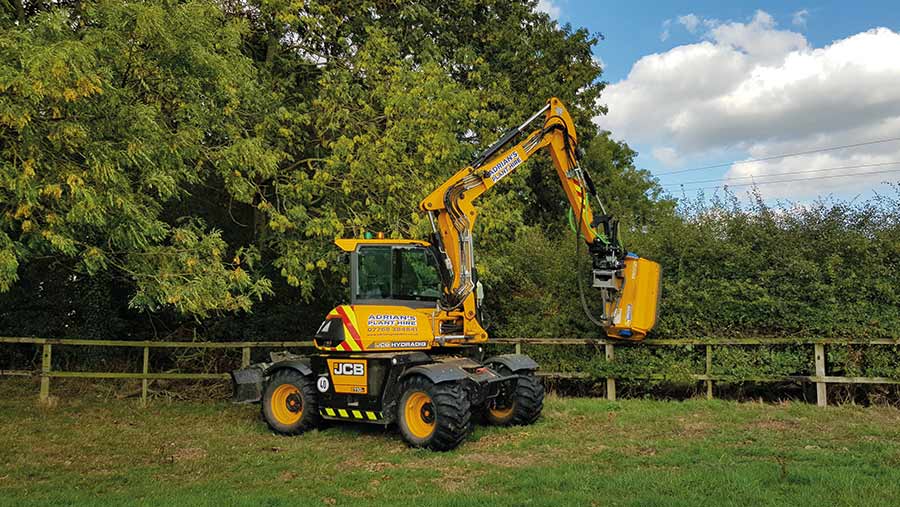 It also has a set of pincers on the back that Mr Patrick says are invaluable for moving small trees or branches that have fallen across a ditch.

However, he thinks the rotating and angling functions are the most handy.

The angle adjustment, for example, helps with accurately profiling ditches and when putting a camber on farm tracks that he rejuvenates using a 2.5m-wide grading beam.

“I don’t really use the machine’s built-in blade very much, but it does provide a useful backstop for the track grader to avoid putting any strain on the boom cylinders when pushing it along,” he says.

The rotator comes into its own for hedge, grass verge and embankment mowing because it spins the 1.2m Bomford Procut flail head through 180deg at the end of a run, ready for a return pass.

“Working up and down rather than just in one direction saves a lot of time, because every pass is productive and it means you’re not puddling the ground so much if it’s wet,” Mr Patrick explains.

“And if conditions are really poor underfoot, the range of movement at the head and being able to swing the boom means I can cut a section of hedge top to bottom on both sides while stationary before moving forward to work another section.

“It’s slower, of course, but handy to be able to do that to avoid making a mess when necessary.”

He also highlights the flexibility of the three-section boom and the zero tail swing that enable the machine to work along narrow tracks and lanes with the flail tucked in close.

It can still reach out to mow or clean drainage dykes, trim grassed embankments and even clean ditches from behind a hedge where roadside access is tight. 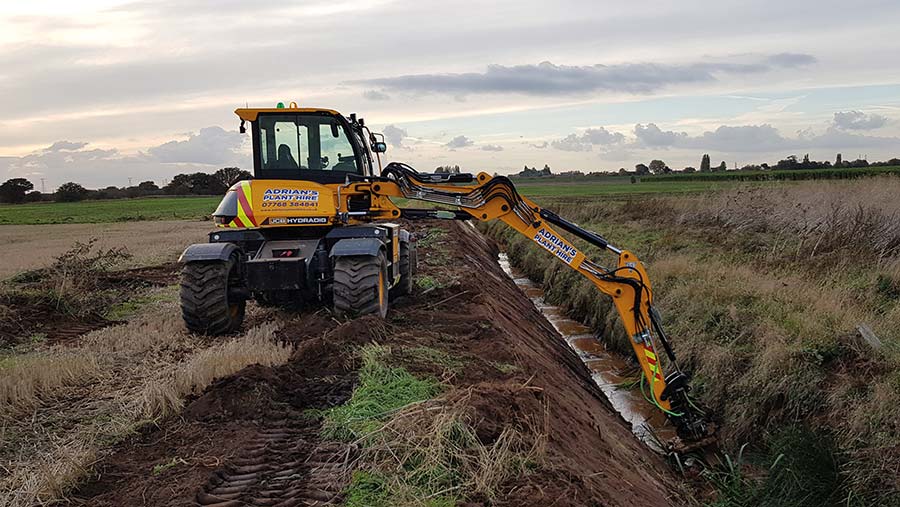 Visibility from the cab is another advantage, says Mr Patrick. “It’s brilliant because I can see all four wheels from the seat and, of course, I can face whichever direction I want just by slewing round and angling the boom.

“For grass verge mowing, I’ll face straight forward, perhaps at a bit of an angle, with a comfortable view of the flail just ahead of the front wheel, and then for siding a hedge I’ll set the cab at about 45deg.

“For topping the hedge, I’ll go to 90deg – facing the hedge and going sideways. You soon get used to it, even steering using the joystick switch, sometimes in crab-steer mode to spread the load.

“And the best thing is not having to constantly turn your head sideways like you do in a tractor, so there is no neck strain when you get off at the end of the job.”

A hunch that JCB’s wheeled excavator design would be a handy machine for his fleet has proved a winner for Adrian Morrison, who runs a contracting service near Ripon in North Yorkshire with his son, Chris.

He was intrigued by pre-launch video clips of the machine, and as it was revealed he called his dealer, TC Harrison, to order one. 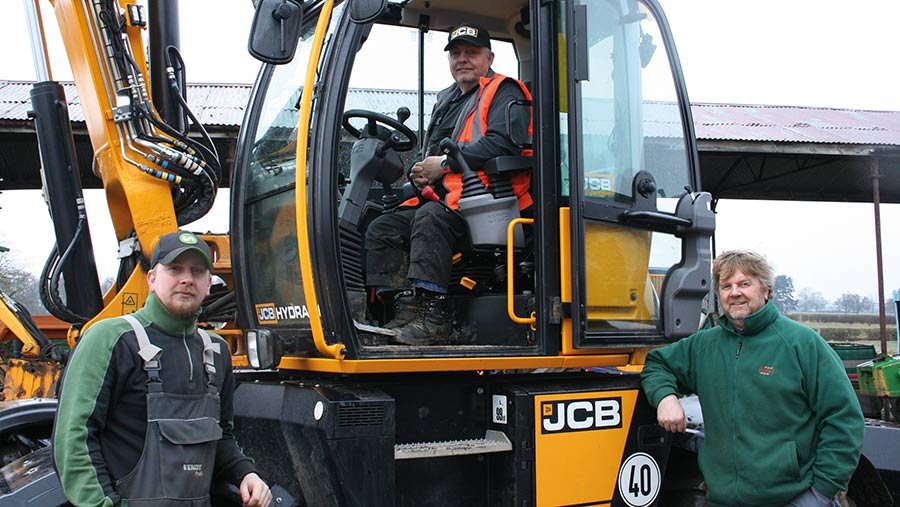 “We run several tractors with contractor-spec reach mowers for hedgecutting and mowing grass verges, and we also have tracked excavators for cleaning out ditches and drainage channels,” says Mr Morrison.

“I could see the Hydradig handling all those jobs while offering greater versatility and the mobility that tracked excavators don’t have.”

That inkling proved correct and over the past five years, the Hydradig 110W has not only met his expectations, but exceeded them.

The first job was to adapt it for hedgecutting by putting on a simple rotator for a flail head. A 1.2m flail was trialled to see how the hydraulics would cope before it was swapped for a 1.5m version when it became apparent there was plenty of power available.

“I daresay it looks a bit awkward to someone used to hedgecutting with a tractor that you sit at a right-angle to the direction you’re working,” says full-time operator Paul Wass. 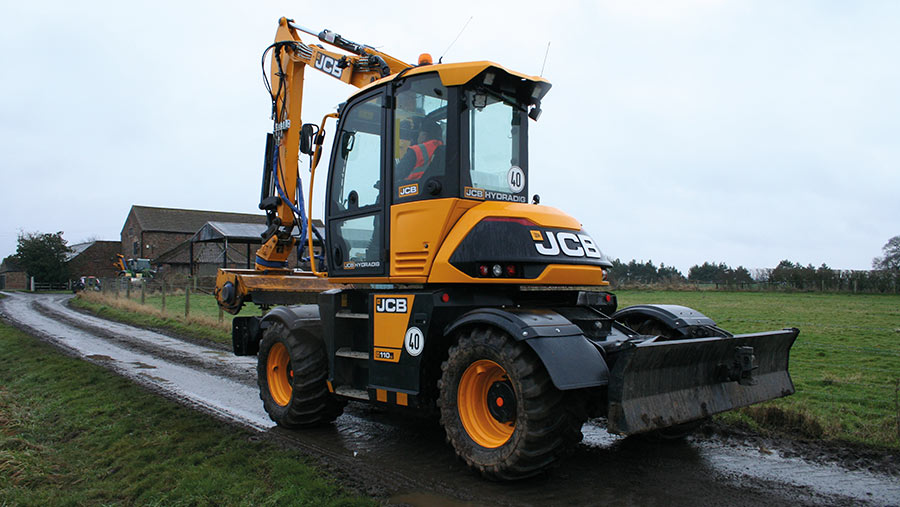 “But actually, it’s great having the cab slewed round so you’re facing your work, with the hydrostatic drive giving a nice, steady speed and the seat joysticks making it easy to control the two outer sections of the boom.”

Mr Wass adds that with the inner section operated using a rocker pedal, it is possible to effectively set a boom height limit that minimises the risk of getting too close to power lines.

Operator benefits aside, the big attraction of the Hydradig for Mr Morrison is productivity.

By working in one direction topping and then siding on the return run, every pass is productive – there is no running back to the start doing nothing, as with a tractor and flail, to make the next pass.

“We’ve tried swing-round flails that you can work up and down a hedge or verge, but they’re a lot more expensive and by the time you’ve pulled in the arms, turned the tractor, swung the arm round and set it up again, the Hydradig’s half way done,” he points out.

“In other words, we’re making half the passes to do the same job and that not only saves time and fuel, but there is less puddling and mess when you’re cutting in a field and conditions are a bit wet.” 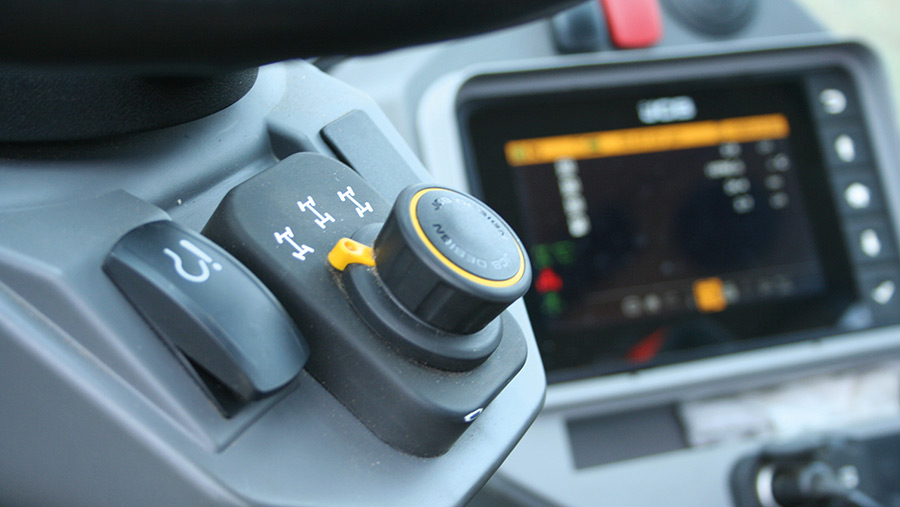 Mr Morrison says the 550/45 R22.5 cross-ply tyres do a good job of supporting the Hydradig’s weight in such conditions, but he would like something bigger with a more pronounced tread than the shallow “tractor” pattern to help further improve flotation without sacrificing traction or stability.

Productivity apart, the other key attractions of the Hydradig for Mr Morrison are its versatility and mobility.

He claims that the machine’s capabilities are such that it makes an excellent tool for ditch and drainage channel maintenance, and he likes the way it can also handle other roles and switch to them in different locations with little productive time lost.

“Drainage channel maintenance normally involves sending in a tractor and flail to cut the vegetation and a tracked excavator on our low loader – or a lorry for more distant work – to clean out the silt.

“But the Hydradig can do the whole job on its own – one man, no hassle; and if conditions get too wet, Paul can pull out and quickly get the machine on to another job – you can’t do that with a tracked excavator.”

What else can the Hydradig handle?

“We don’t do fencing, but I could see it as a great fencing contractor’s tool, especially for jobs that need a digger on site or where the long reach would be handy to place fence lines up on banks,” he says.