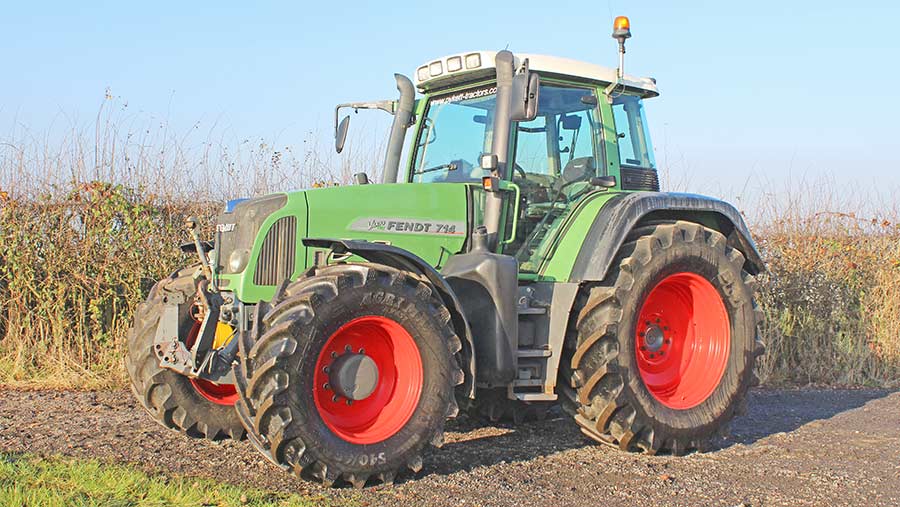 Few tractors hold their value quite like a 700-series Fendt, and even when the hour clock has clicked to five figures, they can still have price tags of more than £30,000.

The reason is simple – these things were built to last and there are plenty of original 700-series examples still working flat out with well over 20,000 hours on the clock.

There has also been remarkably little change in the format since the late 1990s.

Buyers get most of the features of a new one for a fraction of the price – including a six-cylinder Deutz engine and Fendt’s own two-range Vario transmission.

Crucially, the original Tier 1 models (with Favorit decals on the bonnet) didn’t have TMS.

The system that controls the tractor’s engine revs and transmission ratios automatically – and as a result, many of these have now been exported.

But the system was fitted from Tier 2 onwards, which makes these tractors almost identical to operate as the current 700 S4s.

Later Tier 3 tractors look the same, but have common-rail fuel injection and can be distinguished by their perforated exhaust shield.

*Expect tractors in the lower price ranges listed above to have hour counts between 10,000 and 20,000.

In all cases, the factory spec list on these tractors was impressively high.

Double-acting front and rear linkages were standard, as well as three electric spools, power beyond and a three-speed pto.

Auto-steer was the only notable shortfall, which John Deere undeniably got to first.

But despite their build quality, these tractors need to be looked after and, like any machine, they have their weak spots. 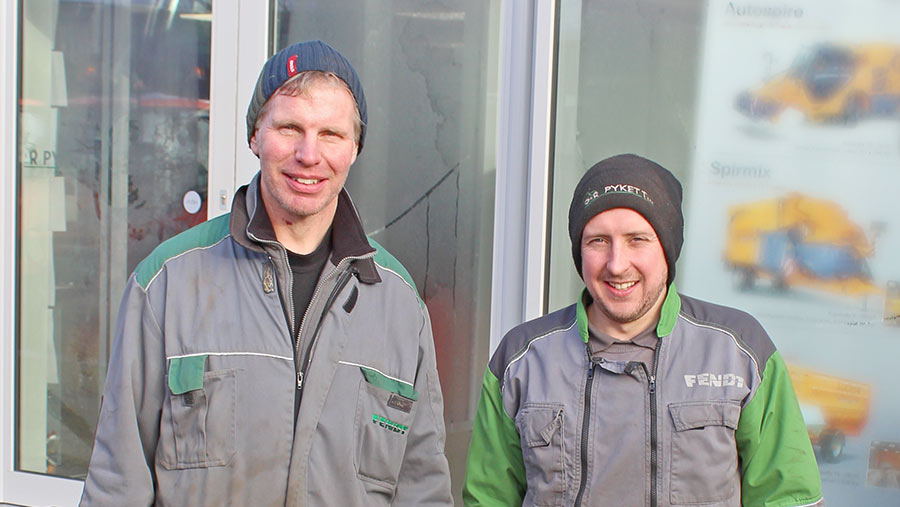 To help get to the bottom of these, we enlisted the help of Derbyshire dealer Richard Pykett and his workshop manager, Joe Bosworth, who together have more than 40 years’ experience with the 700-series.

The tractor we’re focusing on below is a particularly tidy 2006 Tier 2 714 that has clocked 12,418 hours without having the engine or Vario transmission touched – Pyketts are selling it with a £34,500 asking price.

Like a lot of Fendts from this era, it delivers more power than advertised, reading 149hp on the dyno, rather than 140hp.

All 700s had the same engine and transmission, so the pointers here will apply to every model. 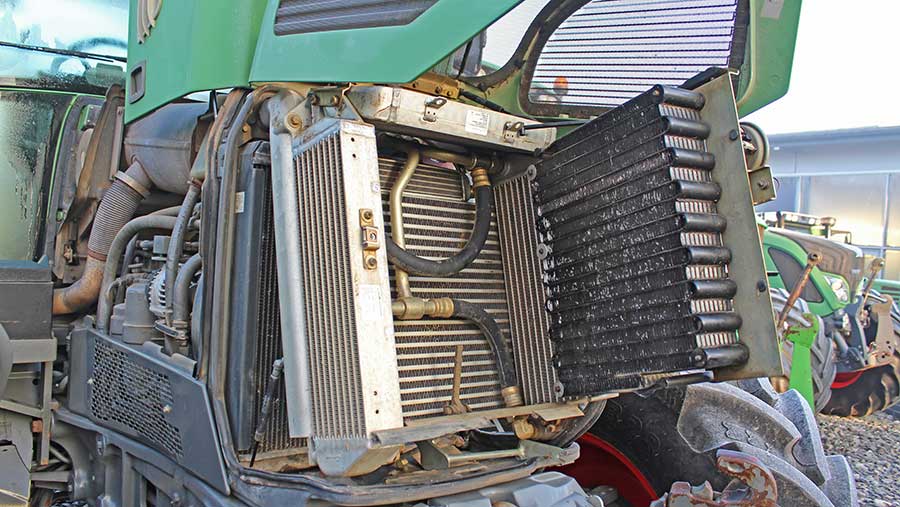 All 700-series Fendts use the same 6.1-litre, six-cylinder Deutz engine which, if treated right, is capable of reaching very high hours.

However, regular maintenance and considerate driving is essential, as well as keeping an eye on wearing parts.

Over-revving
The biggest killer of these engines is over-revving, which is easily done if the tractor is carrying out haulage work on hilly terrain.

Commonly, a driver will be hurtling along at 53kph and when they start heading down a steep slope, they’ll lift their foot entirely off the accelerator pedal.

This basically signals the transmission to stop and the result is similar to dropping a car into second while cruising along the motorway– the revs go through the roof.

Instead, the driver should gradually lift off, before using the foot brake and exhaust brake to make a controlled descent.

There should be a warning sticker in the cab with a max engine rpm of 2,600rpm. This really is the maximum and it shouldn’t be pushed up to this very often.

Continual over-revving can lead to overheating and the pistons have been known to start breaking up. It doesn’t do the Vario transmission any good either – more on that below.

Oil blackening
On Tier 2 tractors, Fendt switched to electronic control of the fuel rack and altered the pump timing to give a bit more afterburn.

This was done to reduce emissions, but the downside is that it caused more carbon to wash into the oil.

As a result, Pyketts recommends changing the oil at 250 hours, rather than Fendt’s official 500-hour figure.

If the engines are continually run with sooty oil, it leads to premature valve wear.

If buying a second-hand tractor, it’s worth checking the colour of the oil and listening for ticking noise at low revs.

A small amount of wear can be rectified by adjusting the tappets, but if left too long, the assembly can wear thin enough to break through.

These are simple to remove, either using stud extractors or by welding a nut on the end. Thankfully, it’s rare for them to break off in the head. 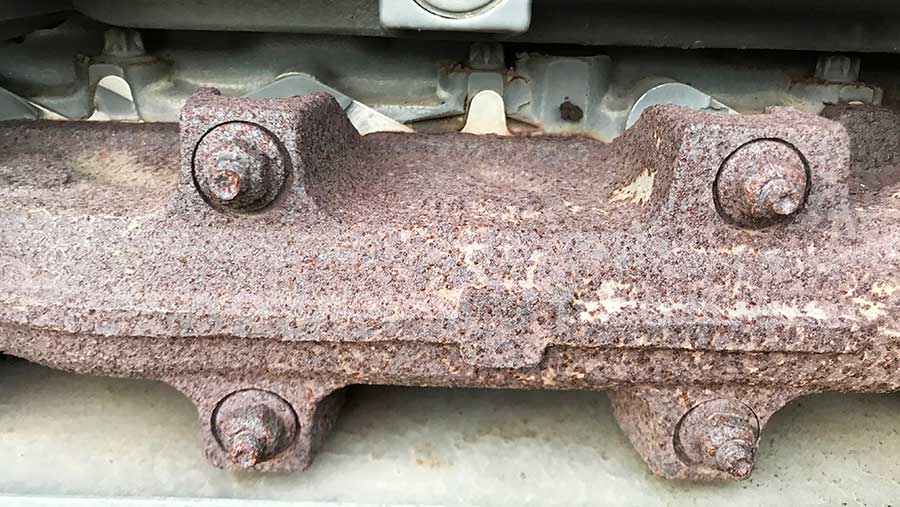 Fan bearings
Fendts are fairly well known for their wayward fans, which can part company from their mountings and embed themselves in the radiator, or put a hefty dent in the side of the bonnet. 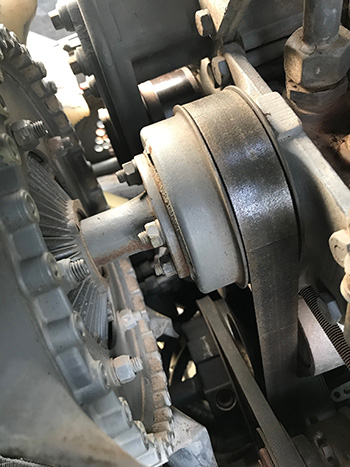 The culprits are the fan bearings, which wear over time and eventually let go.

It’s simple to check if they are worn by grabbing the fan blade and checking for play. Replacements cost about £80 plus fitting, and it’s a pretty simple job to do.

In normal circumstances, a set of bearings should be expected to last 6,000 hours.

Oil cooler
It’s worth keeping an eye on the colour of the coolant in the expansion tank and, if it starts to look murky, the oil cooler is likely leaking oil into the water.

This should be replaced before too much oil gets into the system, as it’s a real pain to clean it out. New oil coolers cost about £240. 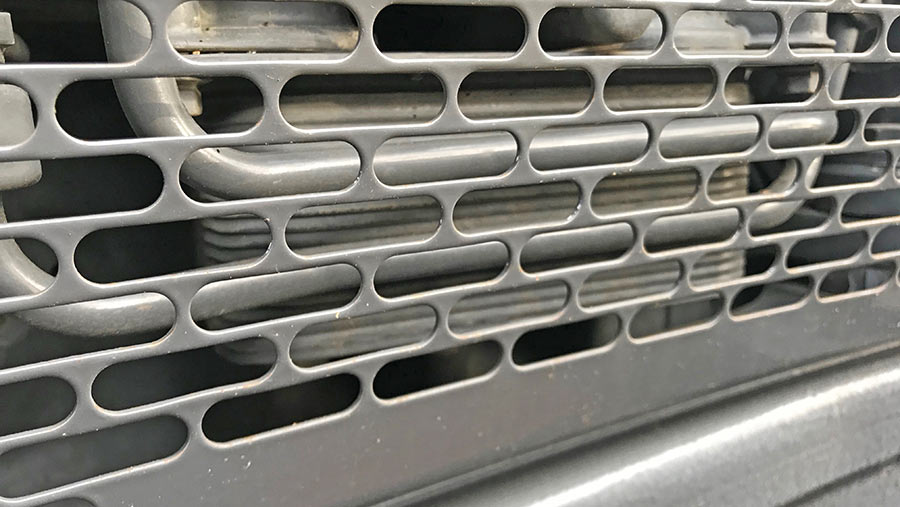 Fuel pump
Fuel pumps can start to weep and, eventually, there will be enough diesel seeping out for the fan to start flicking it around. Replacements cost £377 plus fitting.

Boost hoses
Boost hoses can chafe on the bonnet and wear through, or just pop off. There will be plenty of whistling and black smoke, so it’s an easy one to spot.

The older, multisection pipe pictured is tougher than the one-piece unit that came later. Replacements cost £196. 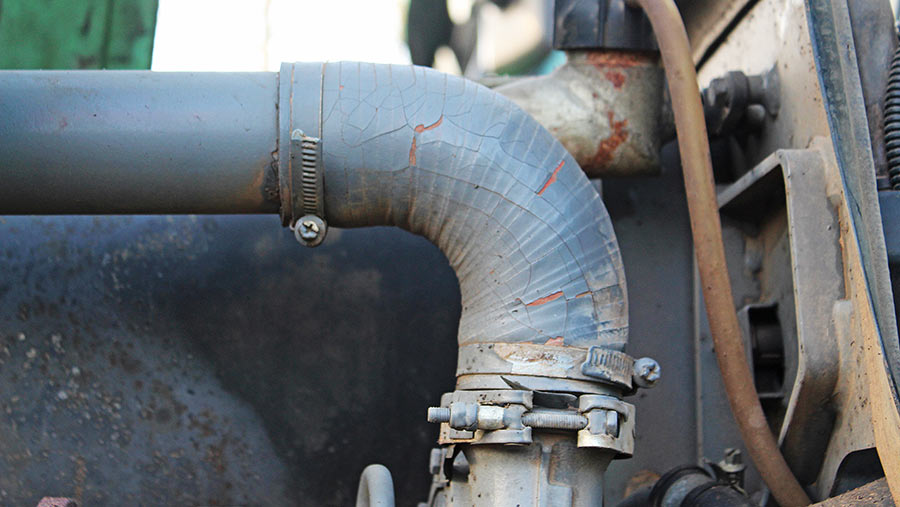 Bonnet
The bonnet design is a little overcomplicated and has a pair of gas struts to help it lift.

These should be replaced if they get tired – firstly because the bonnet can slam shut and get damaged, but more importantly because it can be a very nasty finger trap.

Often, the state of the bonnet is a good indicator of what sort of life the tractor’s had. 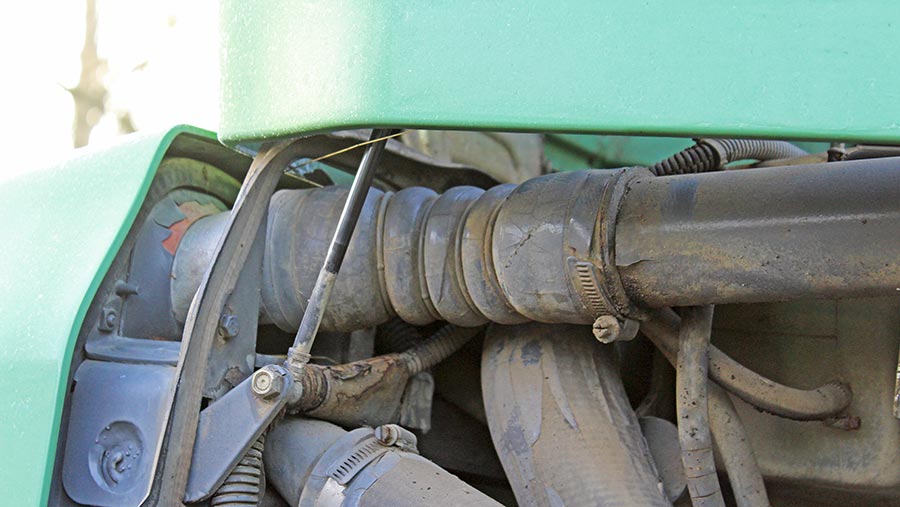 Engine hours
Occasionally, tractors will have had replacement dashboards and, in some cases, the hour clock won’t give a true readout.

To get the exact lifetime hours of the machine, press and hold the F1, F3 and F5 buttons to bring up the maintenance screen, where it is clearly displayed.

Minor discrepancies between this figure and the one on the dash are completely normal. 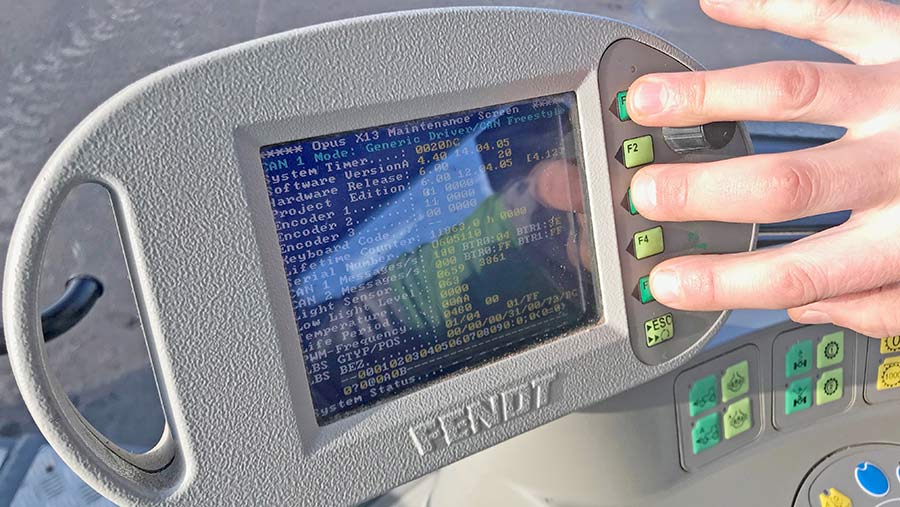 Bulkhead
Bulkheads have been known to crack and often this causes enough vibration to crack the exhaust too. Both can be welded fairly easily or replaced. 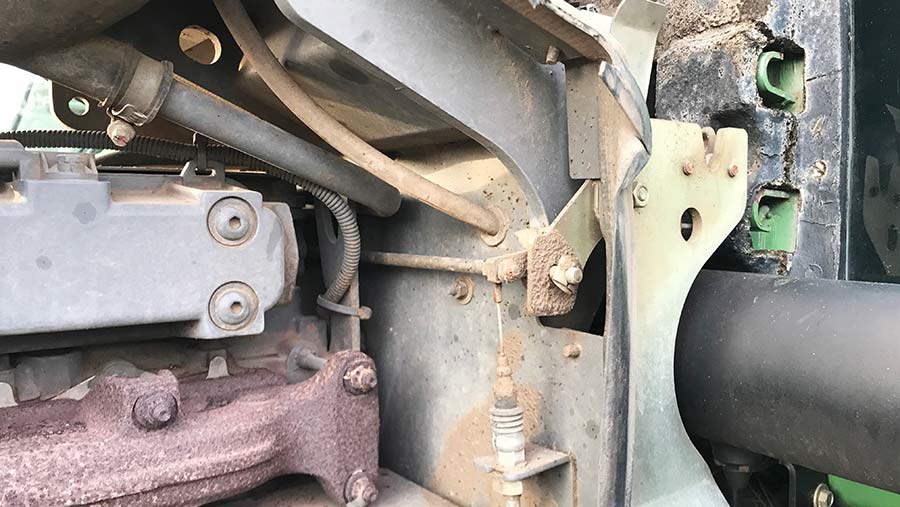 There is no getting away from the fact that the Vario transmission can go wrong.

As a general rule, those that are well maintained and driven considerately will give trouble-free service for 15,000 hours or more.

But many have had some abuse and the odd one will just fail prematurely.

The main way operators reduce their lifespan is by lifting off the throttle at high speeds (as mentioned above), or carrying out heavy fieldwork in range two.

Hard driving like this can lead to failure of the main bearing in the back of the housing, scoring of the pump bores or even pistons being forced out of the pump.

Another common mistake is tipping a load of hydraulic in there, rather than putting it in the correct tank by the front steps. This won’t do it any favours, but generally it isn’t fatal.

One fairly rare problem is oil starvation, caused by oil pipes that have chafed to the point of leaking.

If the tractor is lazy to shuttle back and forth when the oil is warm, this could be the problem. If caught early, the pipes can be replaced before the transmission is a write-off.

Before buying a tractor, listen out for any rattles during driving and pull up the dipstick and sniff the oil.

If it smells burned or the transmission is making noise, it’s almost certainly on its last legs.

However, it’s important to note that rattling can sometimes be caused by wear in the gearbox input shaft, which can be replaced.

Reconditioned Vario units for Tier 2 tractors cost £8,393 plus installation, which generally takes a couple of days.

The 700’s oil-immersed phosphor bronze brakes are one of its strong points and if they are well maintained, they can last the life of the tractor.

However, they do require adjustment from time to time and the cables need to be kept free of debris.

If the cables do get fouled up with detritus, the brakes might not release fully. This causes them to rub, heat up and then start binding. 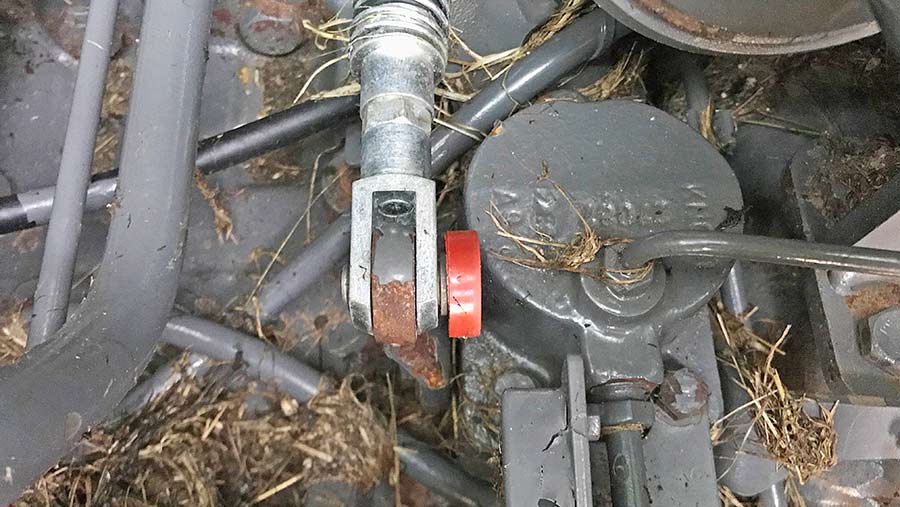 There’s a sensor on the right-hand brake to alert the driver if it hasn’t properly released, but, unfortunately,

Fendt didn’t think to put one on the left. One customer almost went through a hedge when their left brake heated up and grabbed.

A quick way to check all’s well is to press the transmission neutral button when on a slight slope. It should roll freely, without any scraping noises.

Poorly adjusted rear brakes will also give the front cardan brake a beating, so they need to be kept on top of.

Fairly long pedal travel is normal, but if it needs to be pressed to the floor, adjustment is needed. To do this, the rear of the tractor should be lifted off the ground before winding the expander in.

The front wishbone axle is strong and rarely gives trouble, but occasionally the seals in the accumulators can fail.

To test if they are working as they should, drive along at a reasonable speed and press the brake pedal – the bonnet should dip and then rise back up. 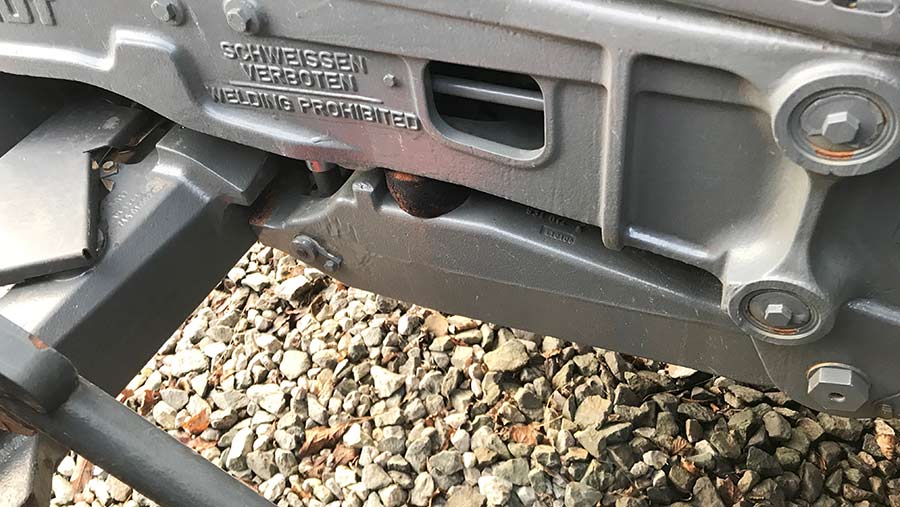 If it doesn’t dip, there’s likely no pressure in the system. Replacement accumulators will solve the problem and they cost £351 or £521, depending on the type.

Like a lot of electric spools, the electronic head can fail. These are fairly simple to replace, but cost £1,374. 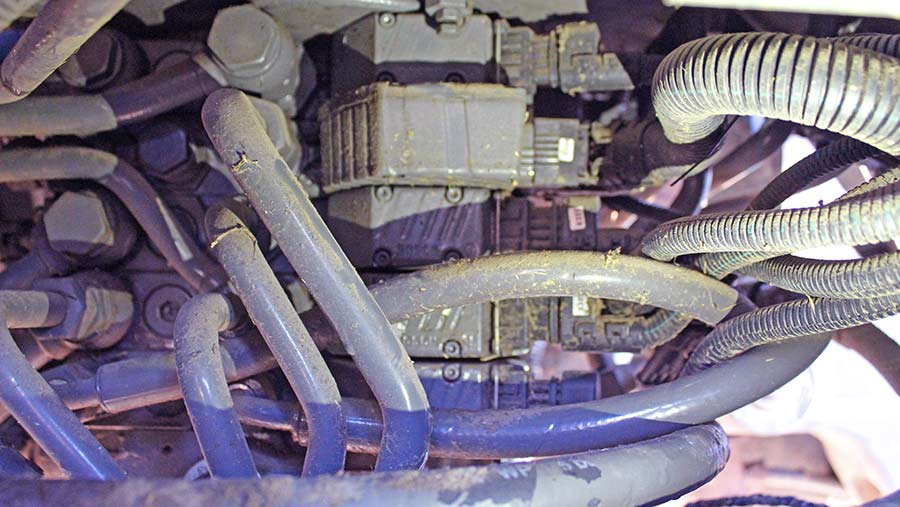 The rear linkage is made out of tough stuff and rarely suffers wear.

However, the original Bennett pickup hitch has a massive 21 grease nipples, which often get neglected. This leads to premature wear and eventually the hitch won’t latch properly.

This tractor is one of the few to have a Dromone pickup, which is a much simpler setup. 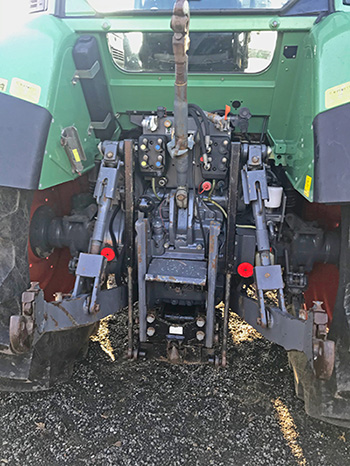 Cab interiors are pretty resilient and despite all of the high-tech features, electronic troubles are very rare.

The most common problem is the work light switch arrangement, which can pack up – these are simple to replace.

Joystick buttons can also wear or get damaged over time, but a new set of buttons is simple to fit and they cost £88. 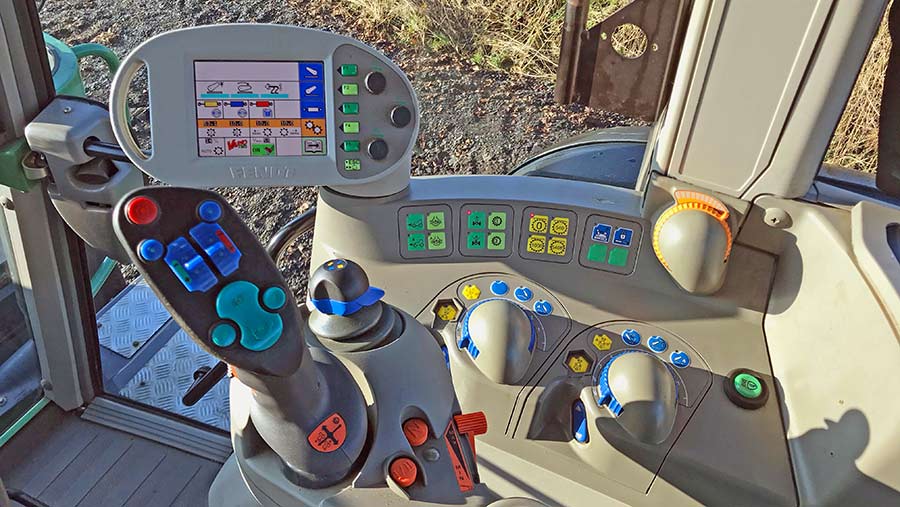 These tractors have separate oils and filters for most areas of the machine – engine, hydraulics, transmission, brakes, half shafts and the front axle.

It prolongs the lifespan, but means servicing will be more expensive than most other brands.