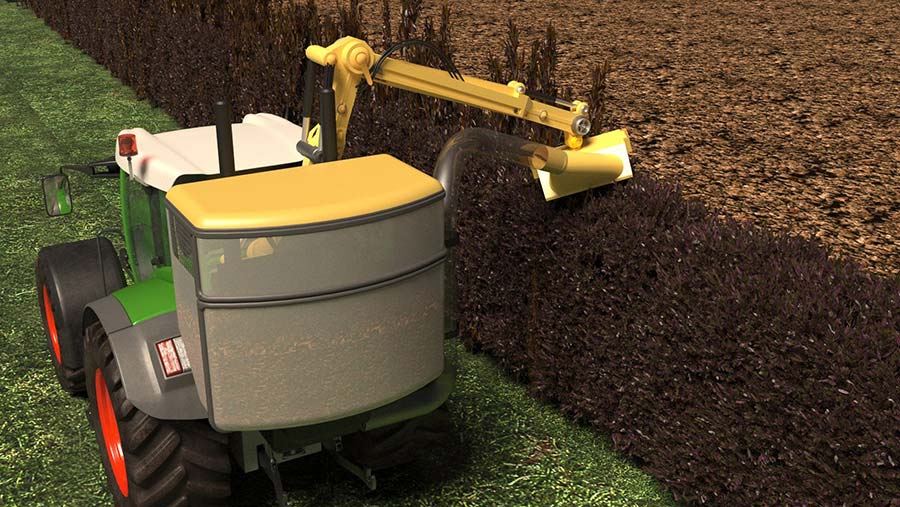 Jim George has come up with a means of harvesting an untapped commodity on every farm in the country – biomass from hedges.

His Hej Harvester concept offers farmers the prospect of getting a return on the significant outlay involved in trimming hedgerows by collecting the woody material usually left to rot on the ground.

The system features a wide cutting head designed to butcher the top 0.6m of growth into uniform pieces in a single pass.

To achieve this, he designed a rotary cutter that carries special teeth that can be moved to vary the length of chop. This means material can be sliced into relatively short lengths if it’s to be fed into a domestic biomass boiler or left slightly longer for use in industrial-scale facilities.

Using teeth instead of conventional flails also means the hedgecutter can potentially travel up to 50% faster – an appealing prospect for contractors dealing with hundreds of miles of hedgerows annually.

The cuttings are thrown into the back of the chamber, where they are sucked by a pto-driven vacuum into a big hopper mounted on the tractor.

Provisionally, this design features a length of ducting separate to the telescopic hedgecutter arm, but Mr George has also sketched up plans that see the two combined. This would mean using tubular steel for the arm, allowing it to double up as the vacuum pipe and thus offering a bit more protection from damage caused by stray branches.

Discharging the load involves backing up to a trailer and raising the hopper on a mast powered by hydraulic rams. He hasn’t yet decided on an exact hopper capacity, but intends to make it as big as possible to minimise the number of offloads.

The biomass can then be burned in an on-farm boiler or stored and sold to commercial energy producers – a market that is currently commanding prices of £150-£180/t.

Having worked on the project for several years, Mr George, from Malvern in Worcestershire, is now looking for a manufacturing partner to finalise his patented design and begin production.