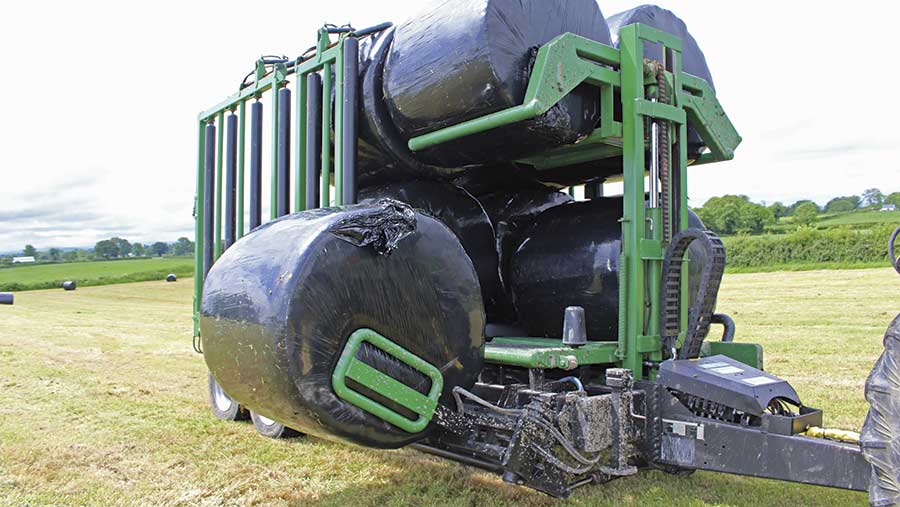 An farmer in Ireland has designed and built a potentially revolutionary machine that makes collecting hard-to-handle, tricky-to-stack round silage bales a doddle.

Chasing square bales at great speeds with high horsepower tractors is now the norm across the swathes of UK wheat stubbles, but the same system hasn’t been applied to fragile silage bales – until now.

Tom Carrigan, a dairy farmer from Co Kilkenny, Ireland, has developed a sophisticated round bale chaser that uses a swing arm to scoop up the silage and place it on rails ready for stacking.

He reckons it will replace the labour-intensive process of loading and unloading from flat-bed trailers and a telehandler, and here he explains why. Questions by Edd Mowbray.

Why did you build it?

I was sure there was another way to collect bales – handling each one twice with the telehandler was so time-consuming, costly and boring.

Another issue we have is crows pecking the wrap on the bales. If you don’t clear them off the field that day then they can be wrecked overnight, so speed is of the essence.

The first chaser I built could carry six bales at a time, but I sold it a year later to a local contractor because I had made plans for a new design and needed some cash to fund it.

The first machine had a lifting arm pinched from an old wrapper, which turned out to be a cumbersome way of doing things. We found lifting the bales onto the chaser was the critical part and soon realised that as the arms slid under either side of the wrapped bale, the plastic would tear if the arms were not located perfectly.

Placing the bale on the bed was another issue, they used to land at an angle causing uneven stacking and limiting the amount we could carry. In fact, it was such a challenge to operate that it was nicknamed the bale buster.

Did you make it yourself?

I had some investment from a grass kit manufacturer, which helped me out a lot. Once I’d finished the designs I sent them off to a fabricator to be made up and what returned was a big jigsaw puzzle that had to be pieced together.

It was assembled on my dad’s farm in Ireland. I have a local friend who is a fabricator and together we spent 52 days in the workshop and got through 60kg of weld in the process. 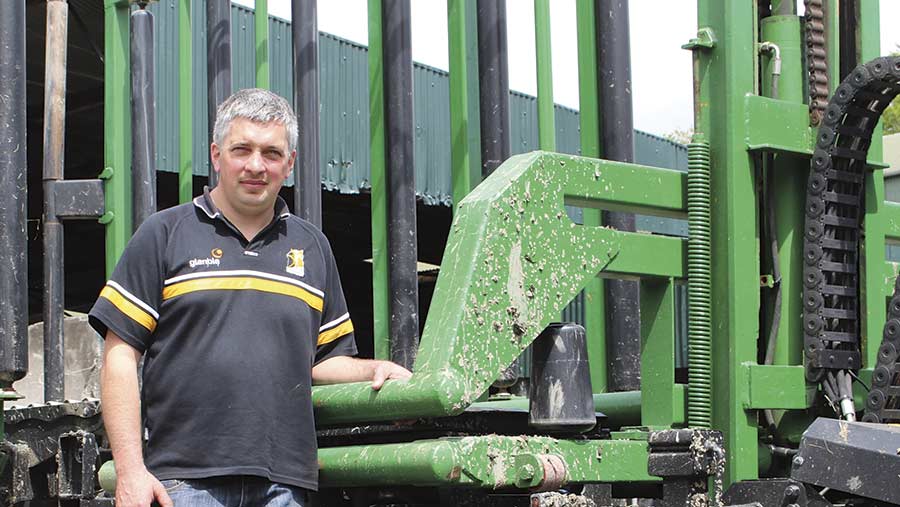 I drive alongside the bale until it touches the floating back-plate, which moves with the bale to prevent tearing. The forward-facing grab carries two grab claws that locate either side of the bale, so it’s a similar set-up to a square bale chaser.

The grab then pinches the bale on the two flat sides where there is most plastic and swings it round through 90 degrees, lifting it onto the trailer deck. The sides of the chaser hydraulically widen to prevent the bales ripping as they are pushed down the bed.

The grab is adjustable and can move closer and further from the tractor wheel depending on where the bale is. It has a modified top link which, as the bale is swung around, returns it to the loading position for placement on the chaser bed.

This was a modification made from the previous design so no matter how far away the grab is when it clamps the bale, it will always sit correctly on the trailer.

How many bales can it carry?

Sixteen. The chaser flicks the first bale across to the other side of the bed to leave space for the next one. Once two are loaded, the front mast (that we borrowed from a second-hand forklift) lifts them up to make way for two more bales to be loaded underneath.

The four bales are pushed down the trailer via a horizontal mast – also off of a forklift – so the process can start again. Once loaded, the sides squish the bales in place, with four clamps securing the top. 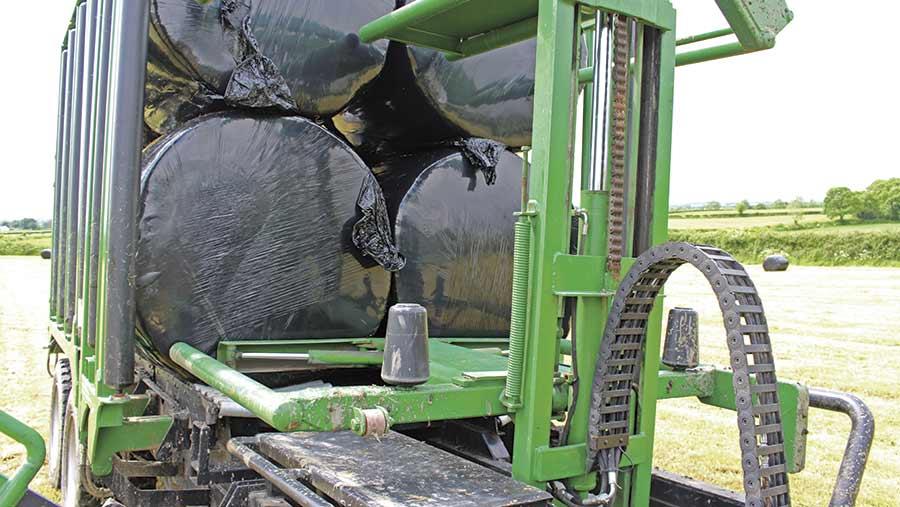 How quick is it?

I can load the full chaser in 12 minutes, although it does take a bit of getting used to. The unloading is a two-stage process with the trailer tipping from the middle rather than the full length like a square chaser. Its builds two stacks of eight bales standing two high and the whole process takes about six minutes.

In one day, I cleared 480 bales and only damaged four in the process. When compared with the cost of a tractor, trailer and loader with an extra person, we reckon it’s saved us the best part of £40 per hour.

The biggest issue we have at the moment is the electronics. They are designed in Italy by Digi and take some getting used too.

There’s one small screen housing 16 different machine functions, but unfortunately the screen can only show eight at one time so there is a lot of switching between the two. The selected function is then controlled by two small knobs below the screen – it all works, but it’s slow and fiddly.

We also had problems with the speed of the hydraulics, which was causing the bales to tip too fast and throwing them over as they landed.

A McHale Fusion valve runs the hydraulic circuit and we fitted a regulator to reduce the flow, but when the bales are slightly heavier we could do with whipping it out for the extra grunt.

Lately, the costliest part of the build has been applying for the patent. We have a worldwide patent on the machine but in total I reckon it has cost £70,000 to get to this point. It has stopped any further modifications I want to do. 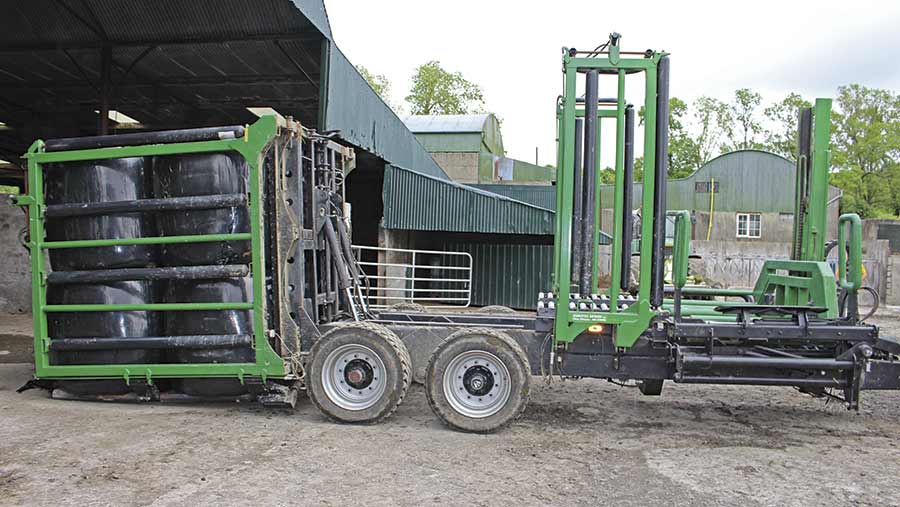 I’m on the search for a company who can take the machine to the next stage. Development of the control box will be a huge step forward and requires some cash and research to do so.

When I was building it I over-engineered the chassis do avoid breaking it during testing, so it’s now carrying around weight that isn’t needed.

The tyres could also do with upgrading to agricultural flotation ones.

Who will buy one?

The main market will be contractors. This type of machine will be looking to clear 400 bales a day so it has to have a couple of balers in front of it to keep it busy.

I also think it could be an option for several smaller farmers looking to share machinery. The numbers just wouldn’t stack up for a small guy buying it alone because it will cost close to £40,000.

We’re gearing up for another year of the Farmers Weekly Farm Inventions Competition – a firm favourite of ours on the FW Machinery desk.

If you’ve been busy building something a bit different in the farm workshop you can get your entry in early by emailing fwmachinery@rbi.co.uk.

Just send us a few details about your creation such as why you decided to build it and how you put it together as well as a high-quality picture or two.

Remember there are three categories: simple, intermediate and complex, so whatever the scale of your project, there’s a chance you could win.