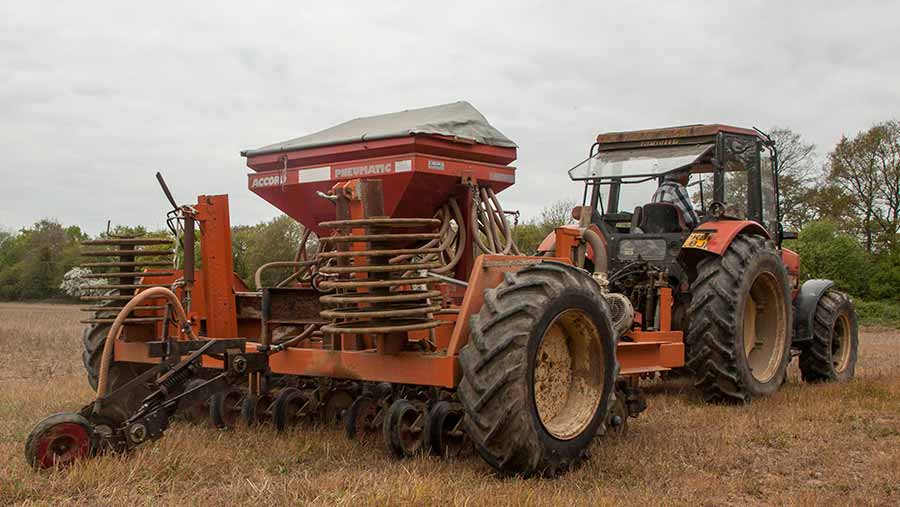 Mike Pinard farms about 120ha of weald clay just east of South Godstone and like many growers with a small acreage, he sees keeping costs down as the only way to turn a profit.

As a result, he keeps a modest machinery fleet and in 2012 decided to ditch the plough and power harrow and give direct drilling a go to cut his crop establishment spend.

A contractor with a John Deere 750A was called to do the job, but none of his winter wheat made it into the ground as the few drilling windows on offer that autumn were missed.

This prompted a rethink and Mr Pinard set out to build his own direct drill to solve the timeliness issue that is the one major drawback of relying on outside help from busy contractors. 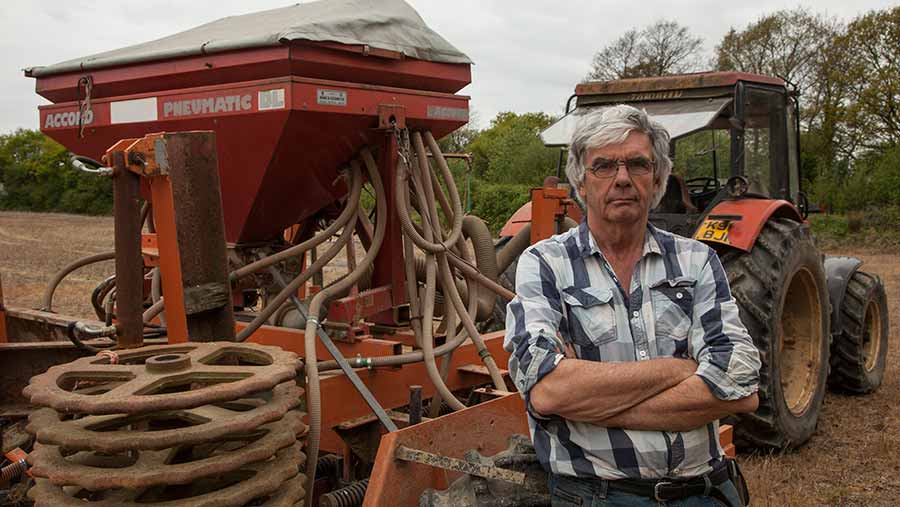 “If there is a break in the weather, you want to be out there drilling, but you need to have a machine on farm so that the day you are ready to drill, it’s there,” he adds.

Initially, Mr Pinard did explore the idea of buying a new planter, but the list of direct drill options on the market can be eye-wateringly expensive, with even the cheapest requiring a shell-out of about £10,000/m.

So, he shopped around for a second-hand 750A, but soon found they hold their value well beyond his budget, too.

“The examples I looked at required a lot of time and money spent on them and I couldn’t justify the cost on my acreage,” explains Mr Pinard.

This set the creative juices flowing and his thoughts turned to the old kit scattered around the farm that might provide the raw ingredients for a homemade direct drill.

An old 3m Bettinson DD was pulled out from under a hedge and after a few hours scouring eBay, Mr Pinard found a set of 19 old-stock single disc openers made by Canadian firm Flexicoil for just £900.

The farm’s old conventional Accord drill provided a half-tonne seed hopper, fan and metering unit and Mr Pinard then set about bringing all the components together into a functioning drill. 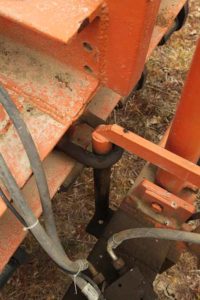 To accommodate the 19 openers on 6in spacings, plus hopper and metering system, the Bettinson frame was gas-axed in half and lengthened by 1m using some rolled steel joist plundered from a disassembled building.

Tilting beams were made to carry the openers and fixed to the main frame using D-shackles hooked around two lengths vertical bar at the front to lift the machine in and out of work parallel to the ground and ensure an even pull at any height.

A panhard bar to the rear prevents lateral movement when the coulters are in or out of work.

Lift is provided by four double-acting rams on each corner and Mr Pinard says synchronising the hydraulic system provided the biggest challenge on the build.

“I had to split the main flow into two with a flow divider and then split the lines into two again to ensure all four rams were lifting at the same time,” he explains. 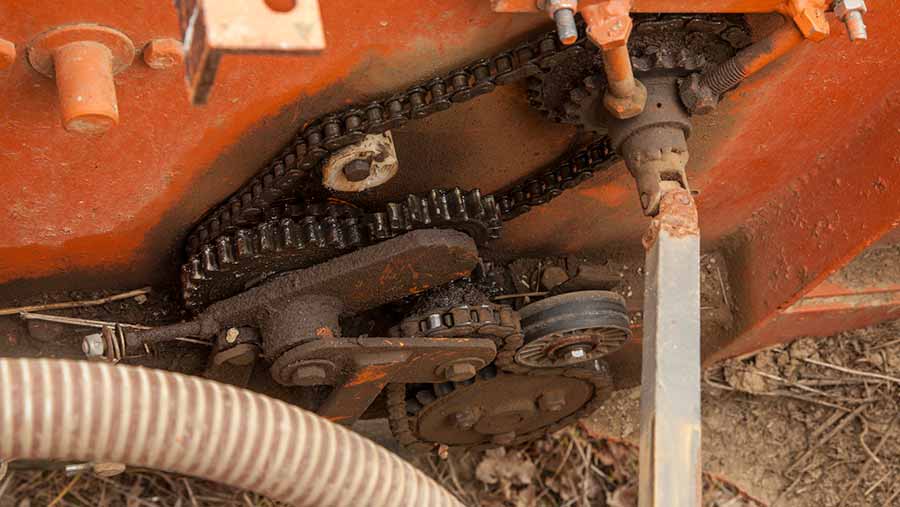 The complete hopper and metering unit was then mounted on top and the metering drive connected using an old telescopic gazebo leg, which engages and disengages the drill as it is raised and lowered.

Getting the pto-driven fan in the right place also caused some head-scratching. The old Accord drill mounted on the three-point linkage close to the tractor, but the Bettinson-Accord mash-up is drawbar mounted and the fan system more than 2m away.

“I cut the complete fan unit off and mounted it on the link arms. I then made an air tube between the fan and metering unit and used some fibre resin and an old oil jug to plumb it all in.

“I also had to block off some of the seed distribution tubes as it was only running half the number of coulters than the old Accord, which was a 6m machine,” he explains.

Weight was added to the machine using old press packer rings and tyres ballasted with water to help keep the openers in the ground.

Finally, two micro switches were wired up to detect ups and downs for tramlining and runs through an electronic counter relay fitted in the old Bettinson control box and mounted in the cab of the farm’s main tractor – a 95hp Zetor 9540.

In total, the whole build cost just £2,000 and Mr Pinard says the nerve-wracking job of taking it out in the field for the first time had to be done without an audience.

“I’ve been very happy with establishment so far, but like any disc drill it doesn’t like the wet, so we aim to get the wheat drilled by the end of September and the canary seed is sown later in the spring when it is drier,” he explains.

There have been some teething problems, with output from the metering system about 10% too high, so seed rates must be adjusted accordingly. Build quality and lateral movement of the coulters has also been disappointing, says Mr Pinard.

“The Flexicoil coulters are designed to operate on billiard tables in Canada, so are a poor design for undulating ground over here and sometimes lift out the ground.

“They’ve also been put together with bad materials and worn horrendously quickly, even on our Weald clay where you struggle to wear tyres out. I’ve had to rebuild them twice in three years,” he explains.

In addition, the fan was kicking out far too much pneumatic pressure and causing significant seed bounce, so Mr Pinard made a simple modification using some waste pipe joiners from B&Q as air diffusers. 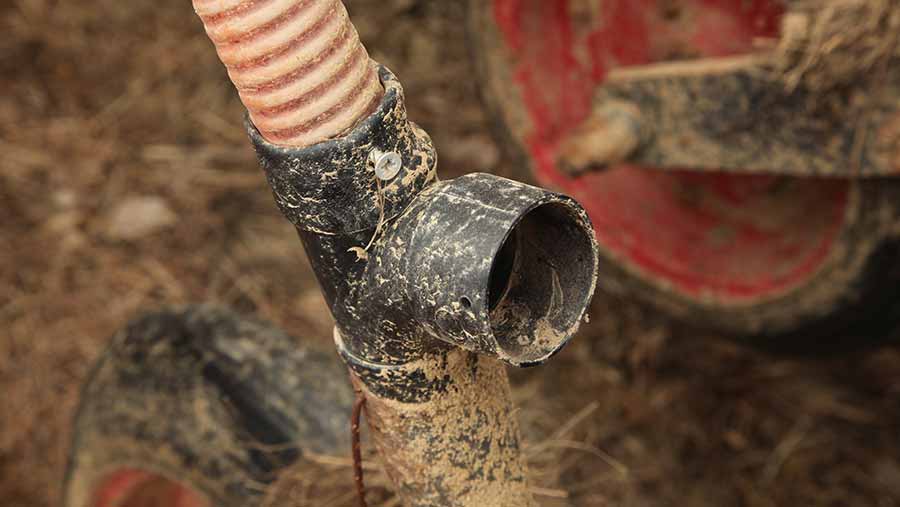 “You can buy purpose-built diffusers, but they are expensive for what they are and no different to the joiners – they work very well,” he adds.

Mark II on the way

Mike Pinard has already been busy working on a second direct drill, which aims to address some of the performance issues experienced with his successful first effort.

Rather than sourcing coulters from a manufacturer, he has set about designing and building his own to keep costs down and the prototype (see picture) is based on a parallelogram linkage and angled spring to achieve constant pressure within 20%. 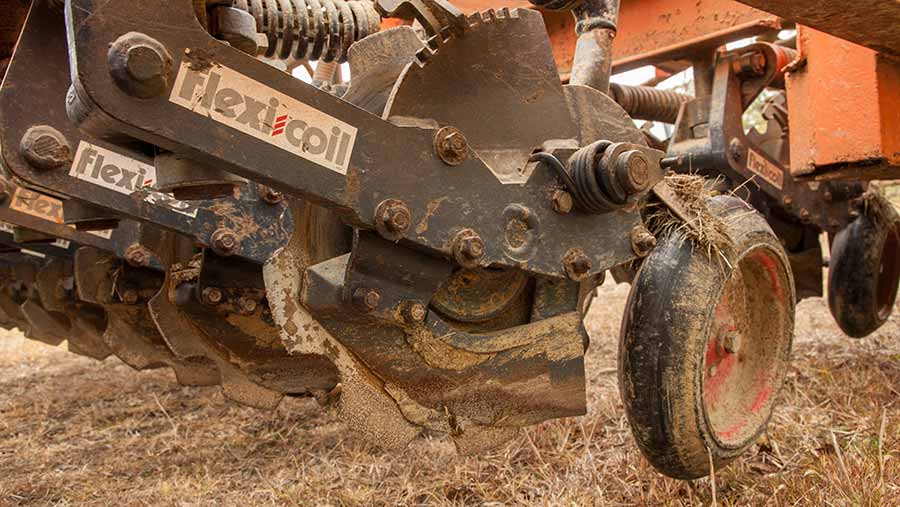 He stressed the leg pictured was built to work out the geometry only and is no indication of the finished article.

“It starts at 100kg and builds to 200kg quickly and remains thereabout for most of its travel . This results in a sweet spot over a much larger range of movement. It is also adjustable for a lower rate in easier-going ground conditions,” he explains.

If successful, he would like to go into production and offer similar-sized growers a cost-effective direct drill option that uses off-the-shelf parts from a company like Sparex, allowing cheap and easy maintenance.

“If people want to try direct drilling, they can take the cost out of it. I’d hope to offer a simple 3m machine with exchangeable hopper system, tramlining and custom paint,” he adds.