With a back catalogue containing thousands of ingenious ideas, there’s nowhere better to read about workshop builds that have saved time, hassle or cold, hard cash.

And if you have designed a machine, gadget or knick-knack of your own, it’s time to get involved.

The competition’s format means that you can still win one of the top cash prizes even if you have built something small and relatively uncomplicated.

The total prize pot for this year is £2,550, with the results decided by a panel made up of journalists and farmers.

See also: Read about all of last year’s entries

The entries are split into three categories: simple, intermediate and complex.

Who is eligible to enter?

Farmers, contractors, farm managers and workers can submit their inventions.

What if I’ve entered my design in other local inventions competitions in the past?

You are still welcome to enter.

What are the prizes?

Will you feature the winners?

All nine prize-winning inventions will be featured, along with the best of the rest, in Farmers Weekly magazine and online. Many of the machines that you see on the stands at shows such as Lamma start life in the farm workshop, so it’s a great opportunity to get your ideas in the shop window.

How do I enter?

Just send some details about how the machine works and what you use it for to oliver.mark@markallengroup.com

You will also need to attach a couple of decent-quality pictures and a contact phone number so we can get in touch.

Alastair and Stephen Maxwell no longer have to put up with the tedium of opening and closing gates when checking their livestock, thanks to their sets of gated ramps.

Having toyed with various designs, they found that standard ramps weren’t enough to deter particularly adventurous cattle from challenging them – and risking injury in the process. 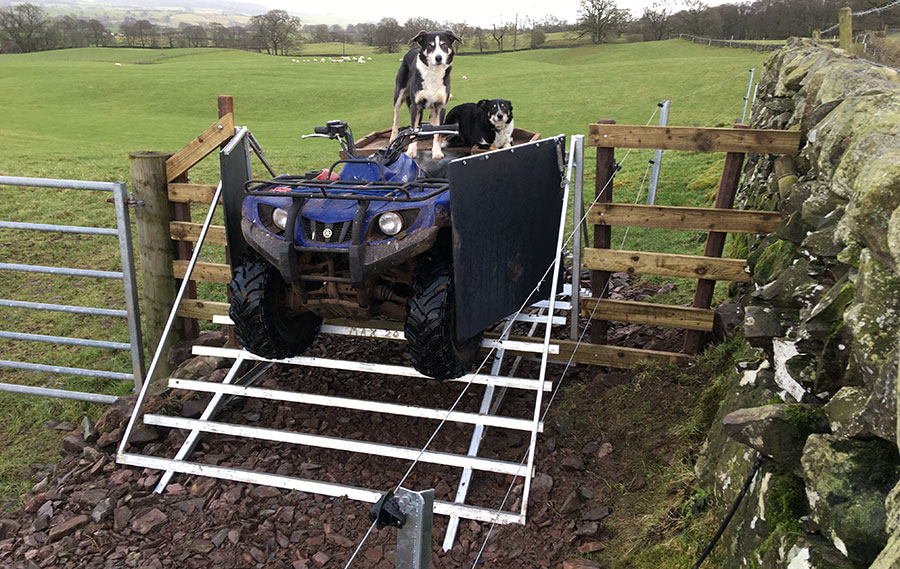 These are made from recycled plastic Stokbord sheets from Solway Recycling, framed on two sides and held in place by old trampoline springs with adjustable tension.

This allows the ATV rider to drive straight over without dismounting.

It now takes about five hours to make a set, they say, and is easily justified in just a few rounds of stock checks across their farm at Thornhill, Dumfries.

In an effort to get shorter, more consistent chop lengths in grass harvested with forage wagons, Willie Dean, of Clockeasy Contracting, near Elgin, developed his front-mounted Xtra Chop kit.

The pre-chop system adds an extra 15 blades, vastly increasing his knife-carrying capacity and helping to knot the crop ahead of the wagon pick-up.

In doing so, it all but eliminates the problem of grass being fed into the wagons longways, therefore avoiding the blades altogether. 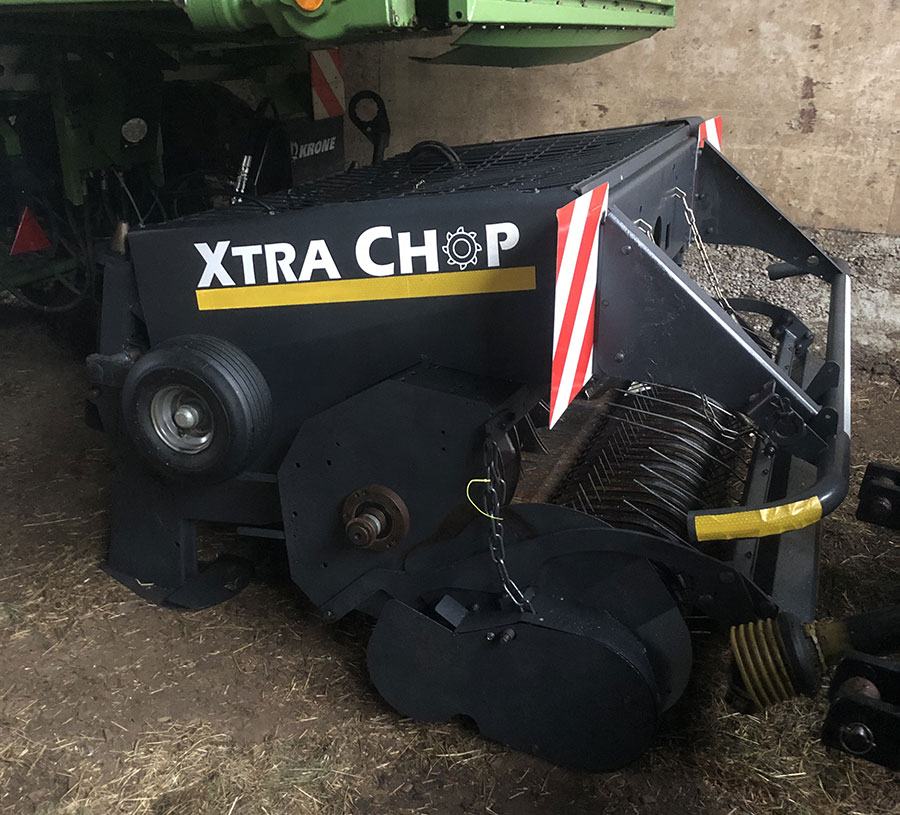 So far, he has built two units – both using the feed-in assembly of burned-out Kuhn balers, which he picks up for about £1,000 and then extensively refurbishes.

To this, he attaches couplings for a Matbro-style cone and pin headstock that he carries on the tractor’s front linkage.

This includes hydraulic locking pins so that the units can be easily picked up and dropped off before leaving the field to unload, though he still has to jump out of the cab to deal with the pto – a snag in the system he’s currently working on overcoming.

This runs through a gearbox and shaft drive to the side of the machine, and he also has hydraulic couplings that allow him to drop the knife bank for blockages or blade changes, and to move the pick-up reel.

In work, Mr Dean travels a bit slower than when towing a forage wagon on its own to minimise the risk of choking the Xtra Cut unit.

Problems are rare in good grass, he says, but lumpy, wet crops increase the likelihood of blockages that can be difficult to spot from the cab.

Though he occasionally found problems feeding the chopped grass into his old Strautmann wagon, he reports no issues with his latest pair of Krone machines.

Power requirement is relatively low, he says, and running expenses extend to a set of knives a year.

The 23-year-old agricultural engineering student works part-time on the 100ha family farm in Alcester, Warwickshire, where they specialise in producing purple sprouting broccoli – typically harvested by individual pickers between September and March. 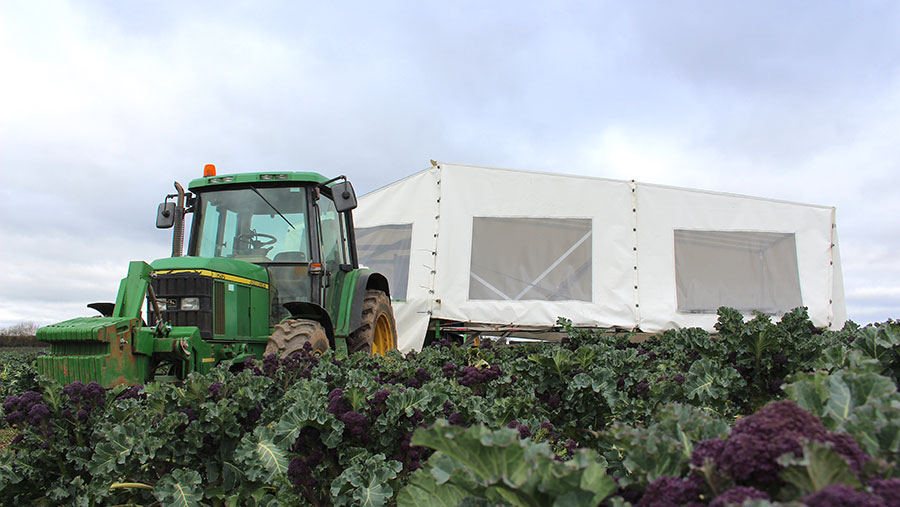 To improve the efficiency of the system and save one member of staff sitting in the tractor all day as it crawls across the field, he decided to come up with a means of controlling the rig remotely from the trailed picking and packing station.

His first attempt at making things driverless used a small hydrostatically driven New Holland orchard tractor, but after proving the concept, he set about converting the farm’s John Deere 6210 with a Powr Quad transmission.

Controlling a fully mechanical gearbox without being in the cab obviously has its challenges, but Mr Beach settled on an arrangement that sees two electric actuators move the forward/neutral lever and powershift stick.

This means that once a master switch in the cab is engaged, the tractor’s starting and stopping, speed (a very sedate walking pace) and steering can all be managed by the operator standing in the picking trailer behind.

The trailer element features a large canopy with a 6m stainless-steel conveyor protruding to one side.

As well as protecting the pickers from the weather, it allows them to walk behind while cutting and placing produce on to the conveyor. The operator on the trailer then packs the broccoli into crates while controlling the tractor remotely.

Mr Beach used computer-aided design to draw up the bespoke 6m cantilever roof, which can fold to within 3m.

He then made the hinges on a lathe, TIG welded the aluminium structure and sourced food-grade equipment throughout.

Safety features include the trailer’s braking system, which requires pressure to release the anchors – rather than pressure to apply – meaning they are always engaged when stationary.

There are also several emergency stop buttons, which shut the tractor’s engine off instantly and require a manual reset in the cab, and an audible alarm prior to the conveyor starting. This is followed by a 3sec delay before it begins.