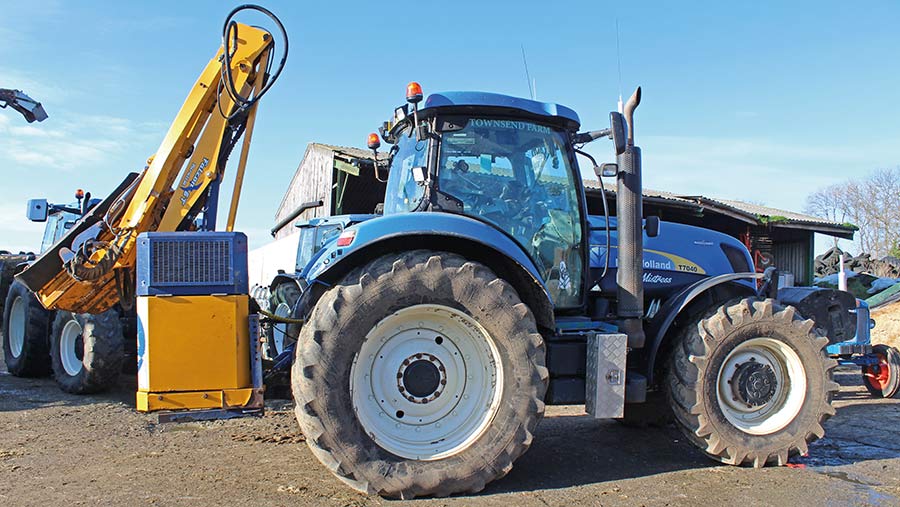 Tractors are a major expenditure on the farm, and breakdowns can leave you with a big mechanic’s bill. There are some ways, however, that you can try to avoid costly breakdowns by keeping your machine in good nic and being aware of the danger signs.

Tractor mechanic, Matthew Morgan details some of his recent repairs and offers a few tips to reduce the likelihood of a breakdown.

Matthew “Buster” Morgan worked for Case-IH dealer James Green Farm Machinery for 21 years, before moving back to the family farm near Bromsgrove, Worcestershire.

He’s been running his own repair business from the farm for the past two years and continues to specialise in Case-IH and New Holland tractors. However, he will work on almost any brand of machine.

See also: Massey Ferguson tractors: Common problems and how to fix them

Most of his work is routine running repairs and maintenance, but he often has a couple of longer-term projects on the go. 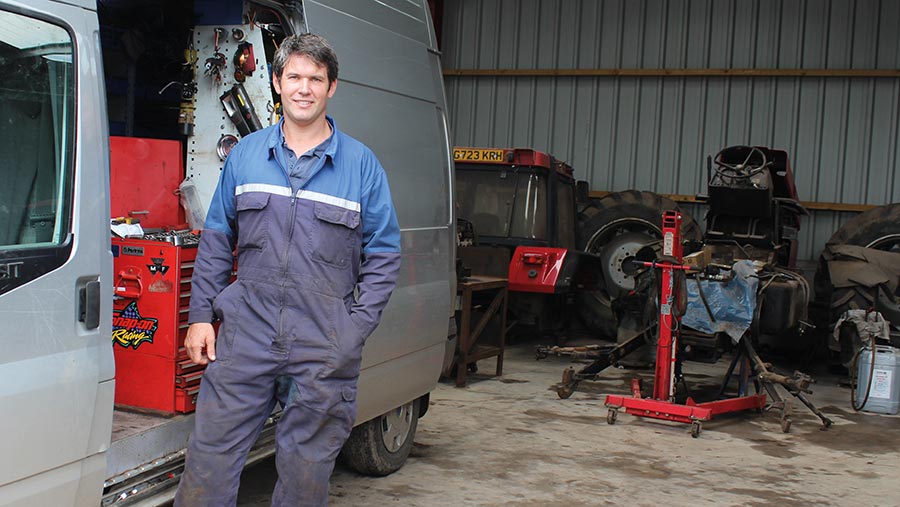 Brakes are one of the weaker points on mid-sized CNH tractors, particularly longer wheelbase Pumas, T7s and older T7000s.

With considerate driving, they can last a reasonable amount of time, but they don’t stand up well to abuse – particularly when used to tow heavy trailers with poor brakes.

If the discs wear down to the metal, they’ll score the axle housings and the whole assembly will need replacing. 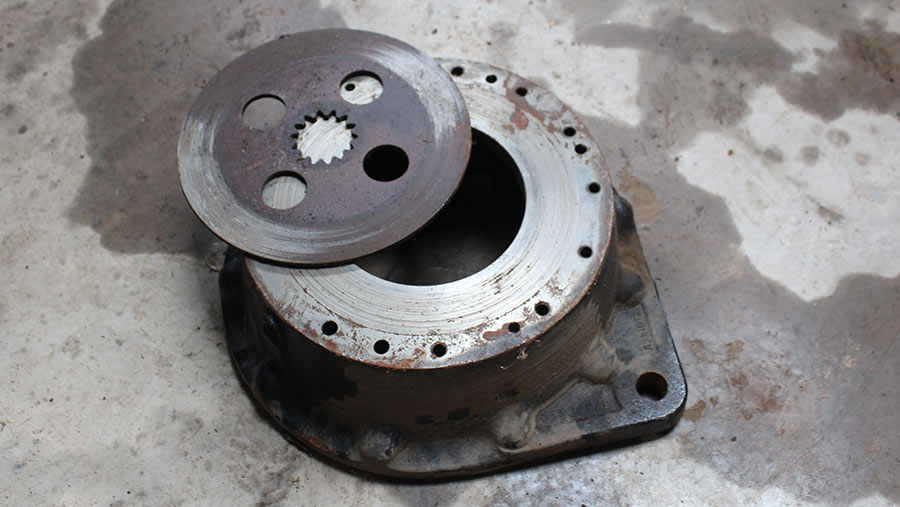 A significant drop in the amount of brake fluid in the reservoir is a sign that they’re getting close to the mark.

Complete rebuild kits cost about £1,400 and the job takes about 15 hours to complete.

Thankfully, the back-end filtration is pretty good on these tractors, so small amounts of swarf don’t tend to cause lasting damage.

CHN has also introduced some discs with a different friction material that, according to Mr Morgan, seem to be holding up a lot better.

If hydraulic performance is sluggish on a Maxxum, Puma, T6 or T7, it could be down to a sticking hydraulic compensator valve on the pump.

It tends to give most trouble on tractors fitted with a loader, as the pump and valve are being worked frequently.

Before sourcing a new one, it’s worth checking the pressure on each of the spools to make sure the valves aren’t at fault.

The replacement part costs about £600 and it is accessed by removing the right rear wheel.

If the compensator valve isn’t to blame, the load sense line check valves could be at fault.

FPT engines in mid-sized CNH tractors are pretty reliable and there are few reports of mechanical failures.

They are a little picky about fuel quality though, and if any contaminants get picked up in the filters, they will throw up an error code.

Replacing all the filters tends to solve the problem, but a longer-term fix is to make sure on-farm storage is up to scratch.

It’s the same situation with AdBlue. If old or poorly stored liquid is put into the system, the tank will need to be drained and refilled with fresh.

The semi-powershift transmission used in New Holland’s T7 range and Case-IH’s Puma is pretty tough, but it isn’t infallible.

The box has six speeds in three ranges – low, medium, high – and it is possible for these range packs to give up the ghost.

The low pack covers speeds one to six, medium does seven to 12 and high does 13 to 18, so if there’s no drive in one of those ranges, it’s relatively easy to pinpoint the offender.

Accessing the packs involves taking the wheels off, jacking up the cab, removing the diesel tank and hydraulic pump, dropping the back-end oil and removing a number of wiring looms.

The tractor can be split, giving access to the relevant pack. It can then be removed, rebuilt and refitted.

If the pack just needs new plates, the parts bill is fairly modest. However, if the shaft holding it has been damaged, the price starts to rise. The biggest cost is labour, as it takes three to four days to do.

If speed changes in the continuously variable transmission are jerky, it could be down to the accumulator.

Mr Morgan recently fitted one on a New Holland T7. In this case, the diaphragm had broken down, causing it to lose pressure and not function properly.

He accessed the part by removing the right-hand rear wheel and checked it by attaching a pressure gauge.

He attempted to put more gas into the cylinder, which caused oil to pour out, highlighting that the diaphragm had broken down.

A replacement unit was about £225 from New Holland, but he sourced one from Bepco for roughly half the price.

Magnum 340s and T8.390s have a nasty habit of leaking oil from the sump gasket.

If the sump could be dropped in situ, this would be a straightforward task, but unfortunately it requires the engine to be lifted out.

This takes about two days, so while he’s got the engine out, Mr Morgan takes the opportunity to replace the main rear oil seal and check the condition of the gearbox drive shaft.

The parts are cheap on this job, so labour is the main expense.

Mr Morgan has a number of Quadtracs on his patch and has worked on a few that have had cracks develop in the track frame.

These can be welded, but to do this the track has to be stripped down and removed.

The process starts by dropping the track off, before removing the idlers and knocking out the pivot pins. 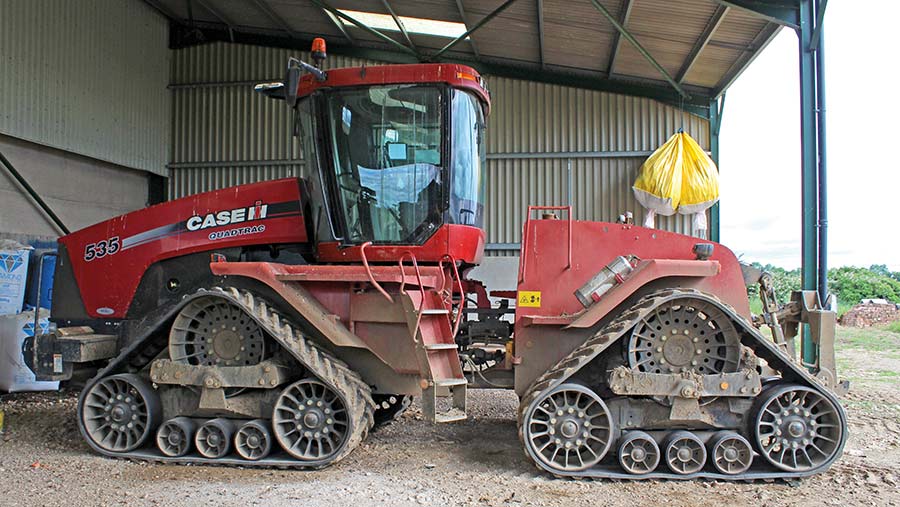 It can then be lifted off with a telehandler or forklift, welded and replaced. The job takes roughly eight hours to complete.

Replacing roller seals and bearings is another common job. When these have been replaced, Mr Morgan always recommends fitting clear caps so that the operator can quickly monitor the oil level and the condition of the bearings.

If the oil starts to go dark that means the bearing is on its way out and needs to be replaced.

If a Quadtrac’s rear linkage won’t stay in the correct position, it’s likely that the potentiometer is the problem.

These cost £100, and once fitted, they need to be calibrated in the tractor’s control screen. This is a relatively simple process that doesn’t require a laptop to be plugged in.

Quadtrac transmissions are put under a lot of strain and they can fail. Refurbishing or replacing one first means getting it out of the tractor.

This involves dropping the oil, recovering the air conditioning gas, lifting off the cab and removing the propshafts.

Once it has been taken out, the process of rebuilding or replacing it with a reconditioned unit can begin.