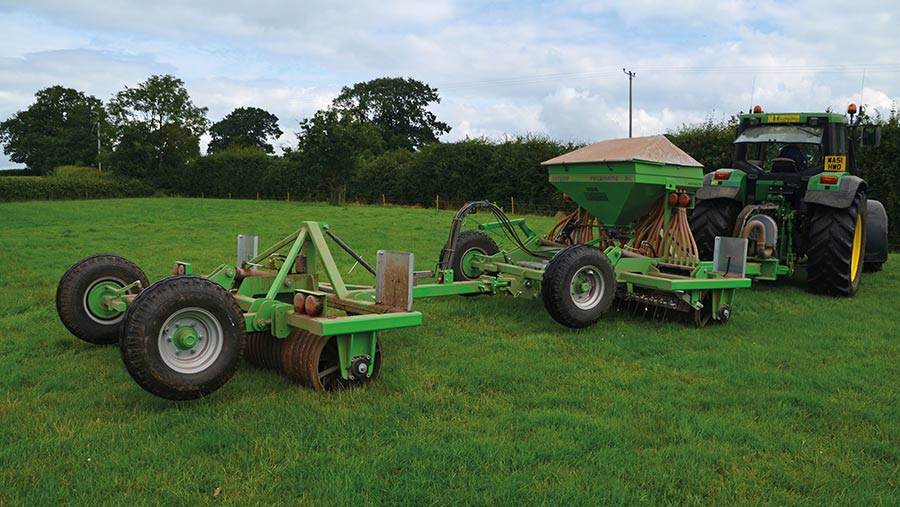 When Devon contractor-cum-engineer Marcus Tucker returned from his second stint working in New Zealand there was one particular piece of kit he felt would really add to his own operation.

Widely used for forage crop establishment across the Antipodes, combination roller-seeders offer the opportunity to simultaneously sow herbage seed and consolidate the seed-bed. However, the choice of such machines in the UK is somewhat limited.

“Working for Nicholson Contracting on the North Island, I had the opportunity to try my hand at all sorts of jobs, but the machine that impressed me most was the Duncan Roller Seeder. It’s pretty straightforward – a 3m-wide ring roller with a box drill mounted on top – but it did a fantastic job of getting seed in the ground while leaving a firm, weatherproof finish. I realised it was exactly what we needed back home, so I started looking at ways of importing one, but the cost ended up being prohibitive.” 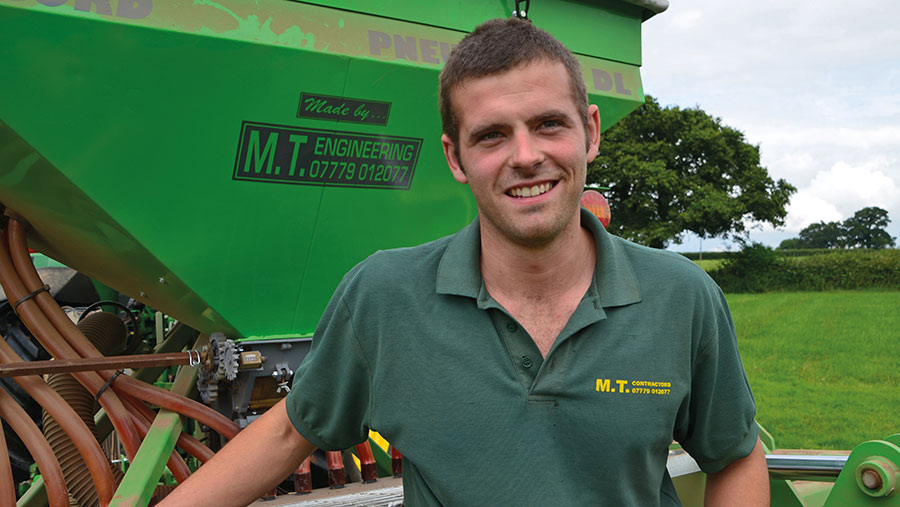 Marcus Tucker’s aim was to build a one-pass rig capable of producing a tilth, sowing seed and consolidating the ground © Nick Fone

A pretty competent self-taught fabricator with an eye for detail, Mr Tucker started sketching out his own design for such an implement.

His first move was to track down an old set of Twose Cambridge rolls from which he was able to salvage the cast spoked rings. Then he bought, for £100, an elderly Fiona box-drill and set about stitching together a heavy box-section frame that would neatly marry up the two, but that process revealed a couple of issues.

“As I began putting the metalwork together it was obvious that the task wasn’t going to be as straightforward as I had hoped – particularly in making room for the Fiona’s land-wheel drive. The seed box itself was also pretty badly damaged, so if I wanted to do a decent job of it then I needed to fabricate a new hopper.

“It was at that point that I took a step back to rethink the design. I quickly realised that despite being more mechanically complex, an air drill could answer many of the issues.”

A 40-year-old 4m Accord DL was duly sourced, and its extra outlets provided the opportunity for more complete surface coverage when squeezed into a 3m-wide frame.

“Like with the Duncan, I wanted to use seed distribution boxes rather than individual outlets or coulters to ensure an even spread. It also meant there was room to accommodate the extra seed pipes from the 4m Accord distribution head, though that did make calibration tricky. I had to do some serious maths to work out how to calculate seed rates for a 3m machine when using a 4m metering unit.”

The move to a pneumatic seeder solved the land-wheel issue, freeing space within the roller’s working width for the Accord’s metering wheel and associated chain drives. Focused on keeping things neat, Mr Tucker even made the box-section arm in such a way that the chains and sprockets could be enclosed within it.

The move to an air drill also meant a fan had to be incorporated into the design. The original machine had been a mounted unit with a pto-driven fan tucked in under the hopper but, to stick with a mechanically powered fan, it would have to be relocated to the front of the roller drawbar.

“The fan meant a fairly major change to the drawbar was necessary so, rather than do a cut-and-shut job, I decided to build a new one from scratch. That enabled me to ditch the original ring-hitch and make my own three-way swivelling linkage headstock, mounting the fan on top.”

This provided Mr Tucker with another opportunity for a bit of housekeeping. Determined that hoses and pipework would be kept to a minimum, he decided the box-section drawbar would make the perfect duct to carry air from the fan to the metering unit. The result is clean, tidy and devoid of any anaconda-esque seed-pipes that could be snagged by rear tyres or link-arms. 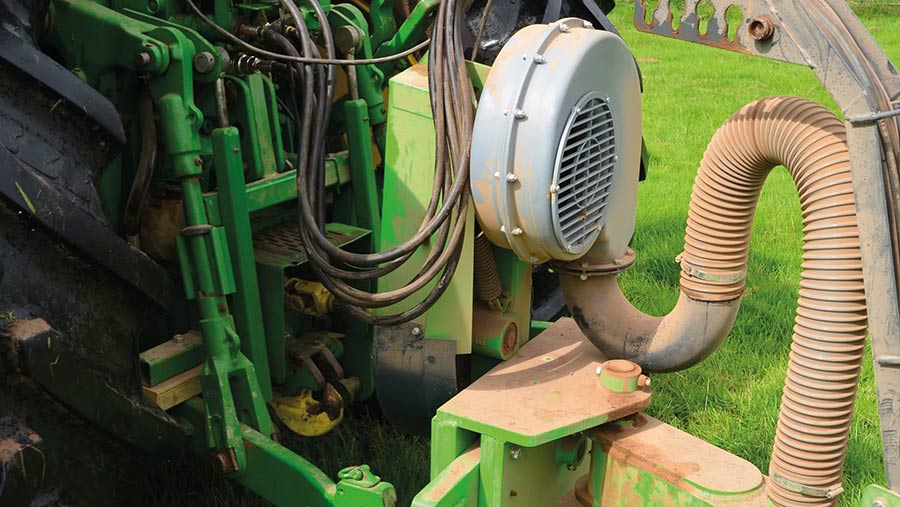 Mounted over the three-way swivelling hitch, the pto-driven fan supplied air to the Accord hopper’s distribution head via the box-section drawbar © Nick Fone

Despite not making the final cut, the first prototype drawbar wasn’t going to waste.

“I was pretty convinced that positioning the seed outlets behind the roller was the right thing to do to ensure a firm, level seed-bed, though that meant some form of additional consolidation would be required post-drilling.

“But part of the whole concept was to move to a one-pass operation. I already had it in my mind that a following roller could be an option and so I set about building one that could be trailed behind, incorporating the original drawbar.”

Like the leading unit, it has a rear axle that is raised and lowered hydraulically. And with both pairs of transport wheels plumbed into the same hydraulic circuit, they drop or lift the rollers into and out of work simultaneously. All brand-spankers, the lift rams are equipped with check-valves to ensure they won’t suddenly drop should a hose fail in transport. 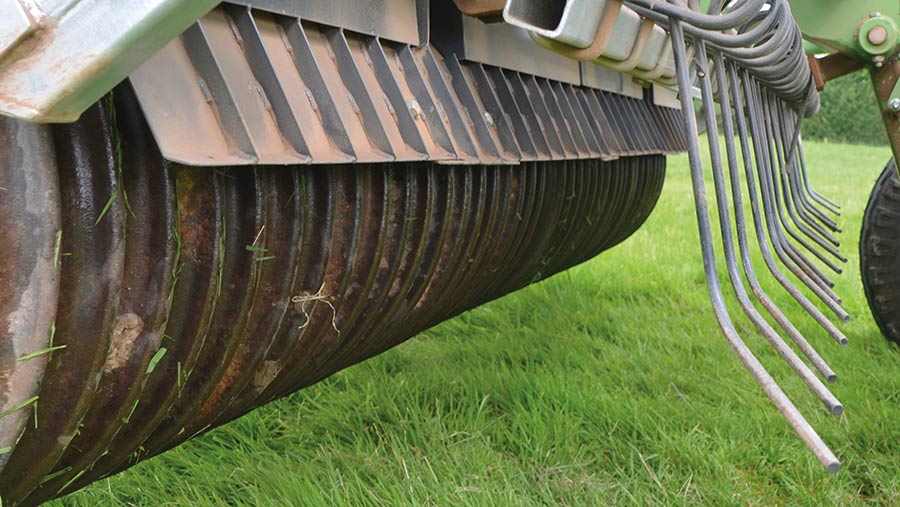 A galvanised tubular bar linked to the metering wheel ram raises and lowers the following harrow into and out of work, so the flow of seed stops as it is lifted © Nick Fone

A neat feature of this setup is a parallel linkage arrangement that keeps the leading roller’s rear clevis and the follower’s swivelling ring-hitch level right through the axle’s lift arc.

That same linkage is coupled to the steps leading up to the hopper-filling platform so they stay level as the wheels are raised and lowered. Meanwhile, drawbar levelling is handled by a simple top-link-style turnbuckle.

The six-stud axles were salvaged from an old 10t Marston silage trailer and consequently came with hydraulic brakes – important given the whole rig weighs about 4.5t.

Sticking with the theme of keeping it simple and using hydraulics to make things happen simultaneously, Mr Tucker’s following harrow design is cleverly linked to the metering wheel.

“I knew a following harrowing would be essential in ensuring decent seed coverage but, rather than a traditional zig-zag tine, I went for Kuhn’s sweeper type.

“As they’re shorter, this enabled me to fit them to a full-width floating toolbar which is scooped up out of work by a tubular frame linked to the land wheel’s lift/lower ram. That way, as the tines are hoisted out of work the seed stops flowing.” 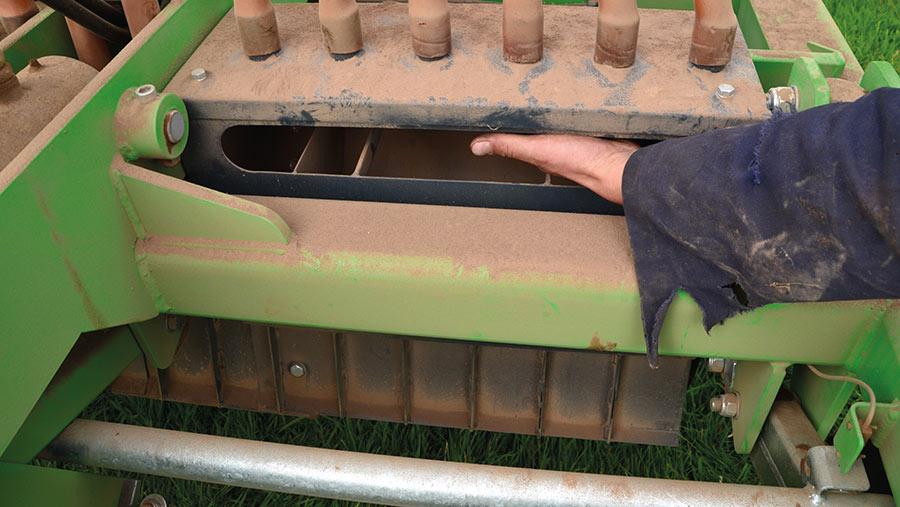 The distribution boxes ensure even, full-width seed coverage, while the slot makes it easy to check for blocked pipes. The vaned plate below encourages an even spread of seed, even when working across a slope © Nick Fone

While certain high-risk parts of the roll-seeder are galvanised, once welded together the majority of the steelwork was sent away for shot-blasting and powder-coating.

But, as is always the way with prototypes, a few modifications have been required along the way – leaving the paintwork scuffed and scorched by grinders and welders.

Not content with a touch-up job, Mr Tucker stripped the machine back to its bare bones and sent away any altered bits for a second full shot-blast and powder-coat.

And a similar amount of detail has gone into the profile-cut steel that makes up a lot of the high-stress areas of the frame.

“From the outset I wanted the machine to look right and not like a bodge-job, so I spent a bit of time working out the exact frame geometry and then cutting ply templates to match.

“I was then able to send them away to a specialist firm to cut them exactly. The beauty is that even though they’re curved, they are all millimetre-perfect. I was so impressed with the job that I’ve now bought my own computer- controlled CNC plasma cutter and I’m in the process of teaching myself computer-aided design [CAD].”

That investment has taken his engineering business a further step forward, allowing him to offer ultra-accurate metal cutting as well as fabrication of aluminium, stainless and mild steel equipment and precision machined components. 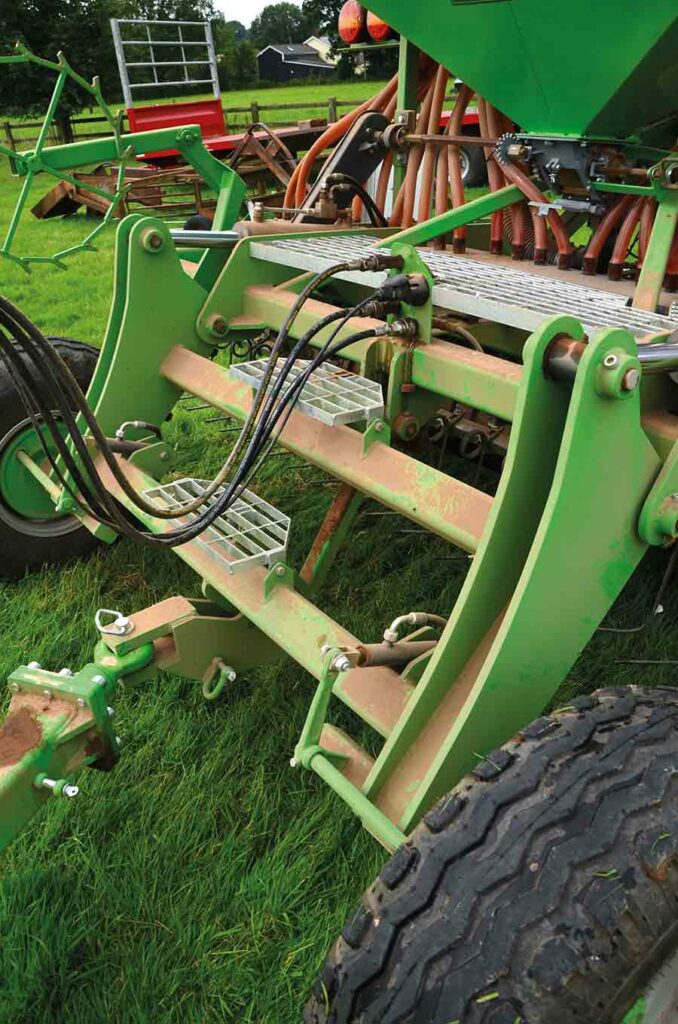 With the rear wheels either raised or lowered, a clever parallelogram linkage ensures the clevis/ring-hitch remains level, as do the hopper platform steps (below) © Nick Fone

Earlier this season the roll seeder got its first outing sowing kale into ploughed, cultivated ground. With some careful calibration it worked exactly as planned, providing decent tilth creation and a firm seedbed all in one pass. 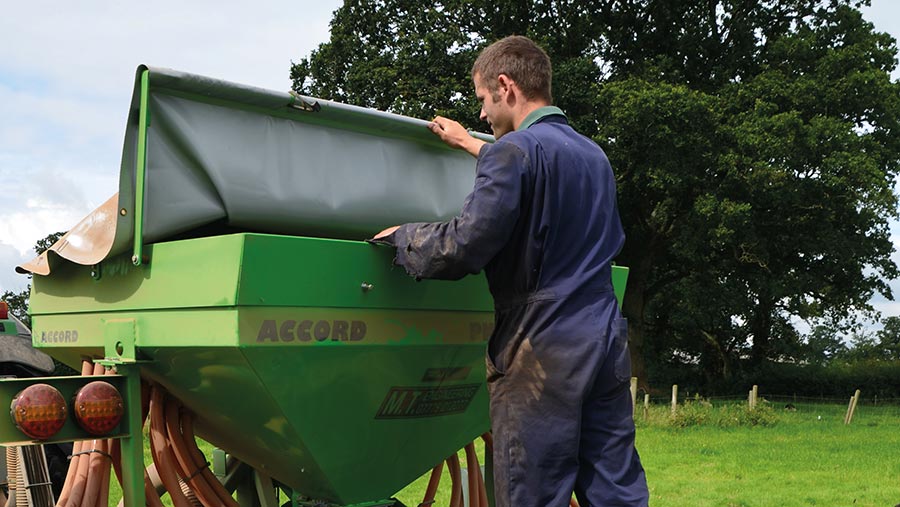 “I was really happy with the way it performed. The tractor just ticks away with the pto spinning the fan at 540rpm and you trundle on, knowing you don’t have to come back to the field a second time.”

So convinced is he by the concept that he now feels confident to start building and selling the roll-seeder, with a 3m rig similar to his own likely to go out the door at about £30,000