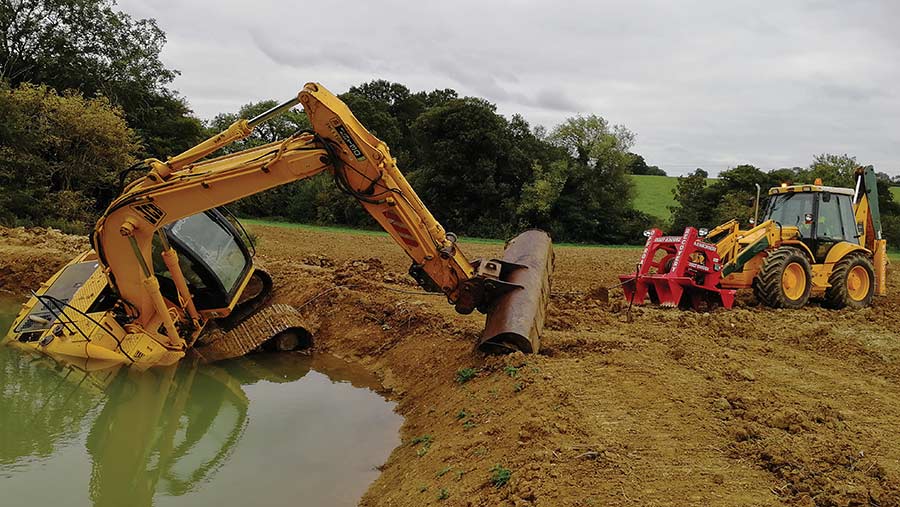 Farmers Weekly’s annual Farm Inventions Competition has unearthed all manner of innovative and resourceful machines built in workshops the length and breadth of the country.

These range from cheap-and-cheerful tools that will do a job, to high-spec, quality equipment that wouldn’t look out of place in a dealer’s forecourt.

Andrew Burt of AB Machinery has built a number of implements that fit firmly into the latter category.

His creations include custom trailers and towing equipment, winches and heavy recovery gear, all of which were put together in his well-appointed workshop near Towcester, Northamptonshire.

Just a few precision engineering tasks such as laser cutting, bending of heavy steel plate and two-pack paint finishes are outsourced to others.

Below, we take a look at a few of his recent developments, most of which have been registered with UK Design Right.

In a bid to safely lower his 20m wind turbine to the ground for servicing, Mr Burt set about constructing a heavy-duty winch.

His initial plan of using a 15t excavator as a counterweight didn’t go well, with the tracked digger being dragged down the field by the weight of the turbine. 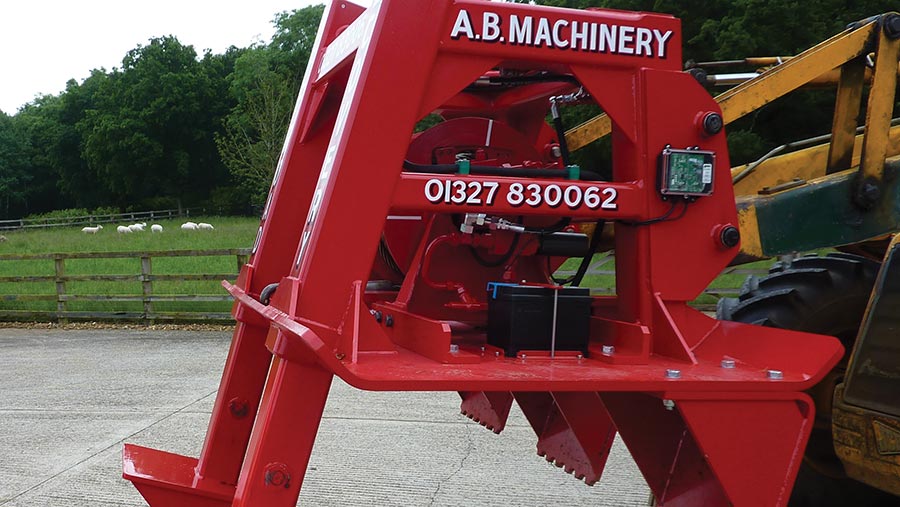 So, when it came to building a machine specifically to handle the task, he wanted to make sure there was no chance it could slip.

His clever land-anchor winch does this thanks to angled legs that channel the pulling forces deep into the ground.

As these push down, they also add grip to a set of toothed feet at the rear of the rig.

The neat design means loads aren’t transferred to the carrying vehicle, which allows it to be mounted on the front of relatively lightweight machines, such as front loaders, telehandlers or a tractor’s three-point linkage.

Both the winch and legs are powered by a hydraulic supply from the carrying vehicle and Mr Burt has fitted a solenoid valve and remote-control unit that allow it to be operated from up to 300m away.

This both improves safety and gives a better view of the job in hand.

All in, the project took about six months to complete and the only work he outsourced was getting the edges of the 1in thick base plate bent by a specialist engineering firm.

Since completing the build, the winch has been used for multiple vehicle recovery jobs, including extracting a JCB JS130 excavator from a pond.

The 13t machine wasn’t running and the tracks weren’t turning, so it had to be dragged through the mud.

For this job, the winch was attached to a JCB 4CX – which weighs about 8t – and it didn’t move an inch.

Following the success of his land-anchor winch, Mr Burt decided to expand his vehicle recovering abilities by adding a 37-year-old Volvo F12 truck to his fleet.

The 6×4 tractor unit came to him a little jaded, but mechanically sound, so he set about tidying it up and adapting it to his needs. 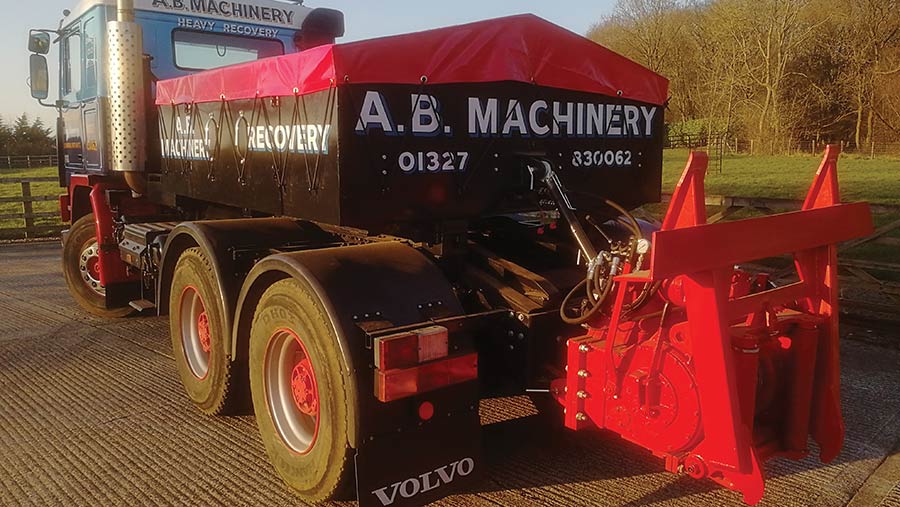 At the rear, he fitted twist locks on to the chassis and made a ballast box that can be lifted on and removed using a forklift.

This sits over the fifth-wheel plate, meaning it takes a matter of minutes to convert it back to conventional duties.

Behind this, he’s also incorporated a three-point linkage that allows him to fit a Boughton hydraulic winch with an anchor.

The lower links are grafted on to the truck’s chassis and the top link attachment is welded to the ballast box.

The second-hand winch was converted to radio control so that Mr Burt can operate it at a distance.

Because the truck has four-wheel drive and diff-locks for both rear axles and the centre differential, it has the versatility to tackle on- and off-road winching jobs.

To recover larger vehicles, Mr Burt also purchased and renovated a tilt-bed articulated recovery trailer that measures 18.75m in total – the maximum permitted length for a vehicle of this type.

This is big enough to accommodate most road-going vehicles, including a full-size coach.

Recently, he used it to recover a Terex loading shovel that suffered transmission failure while driving down the road. 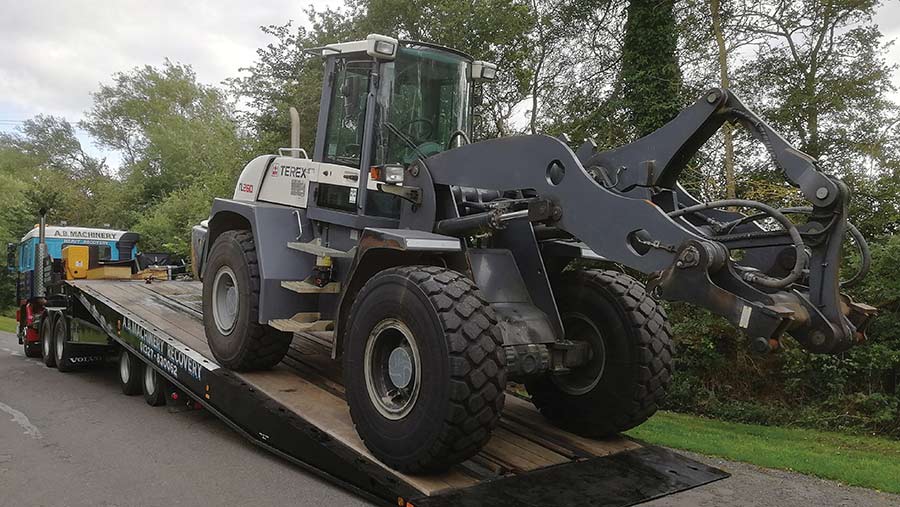 The final piece of recovery equipment in the arsenal is another winch that fits on the back of Mr Burt’s Nissan Navara pickup.

To reduce the pulling forces exerted on the truck, the 8t radio-controlled Superwinch is mounted on a frame that attaches to the chassis rails. 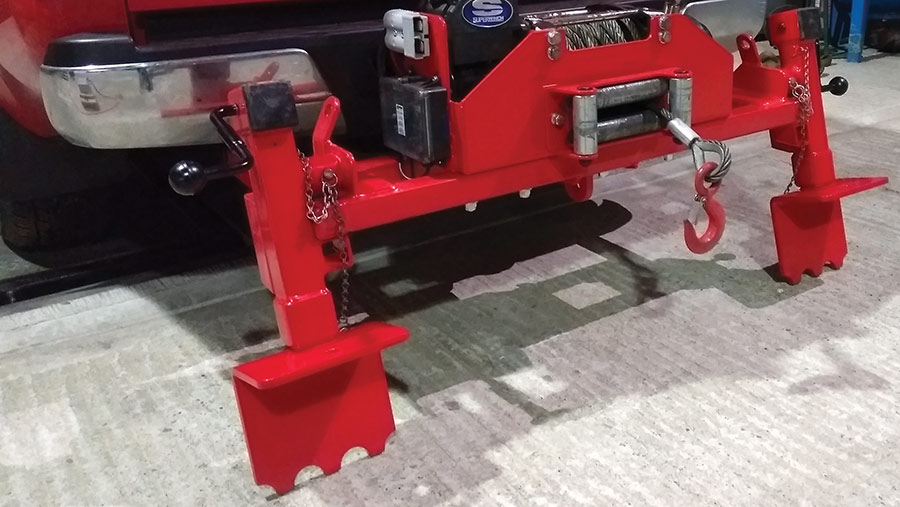 This has a pair of angled jacks with feet that are lowered to the ground to counteract the pulling force.

These were made from standard trailer jacks, with the inner box section swapped for heavier-duty stock and a reinforcing band of flat steel wrapped around the base of the outer section to prevent it splaying.

Thanks to some carefully thought-out geometry, the winch can pull items considerably heavier than the pickup, such as a telehandler or moderately sized tractor.

A recent recovery task involved pulling a supermarket delivery truck out of a local homeowner’s flowerbed after the driver mistook a snow-covered lawn for the driveway.

The incessant rattling of mass-produced tilt-bed trailers prompted Mr Burt to come up with his own higher-quality version. 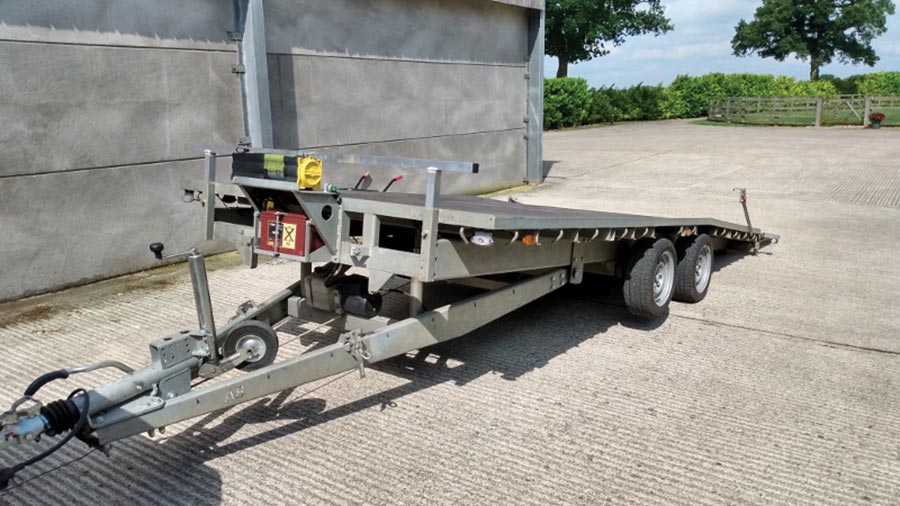 He has also incorporated a slight beavertail into the deck that allows the ramps to be kept short, making them easier to handle.

Twin tilt rams hooked up to electric controls means there’s no manual pumping required to raise and lower the bed.

Mr Burt designed the trailer to have a 3,500kg gross weight and the complete chassis was galvanised to prolong its life.

He did all of the work himself but had some of the more complex components laser cut. 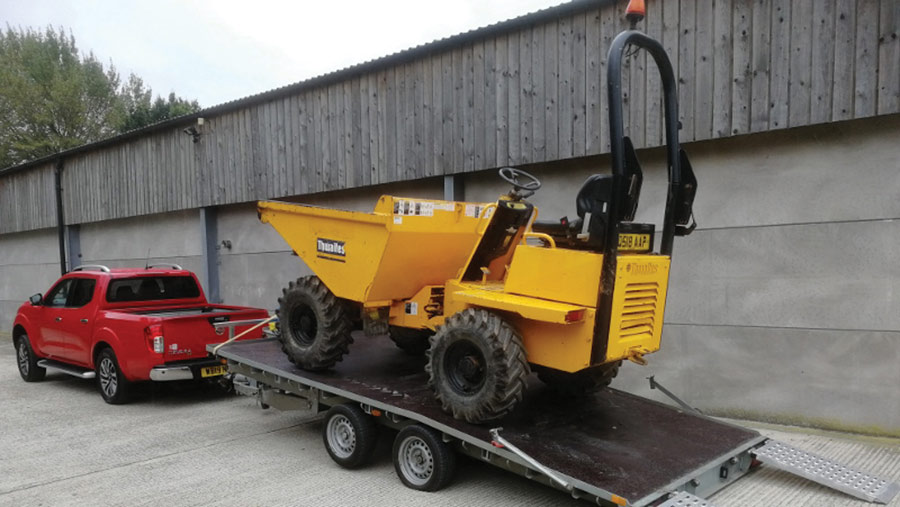 To get the pieces made to the correct dimensions, he hand-drew the parts on a drafting board, before sending them to the laser-cutting firm to put into its computer-aided design (CAD) programme.

For some of his more complex builds, he’s enlisted the help of a friend who works in Formula One to put CAD drawings together for him.

The trailer is apparently near silent during towing and the ramps are always easy to pull out, even after rattling down a rough track.

After growing tired of the bumpy ride when towing trailers behind his double-cab pickup, Mr Burt went in search of a solution.

He experimented with different truck and trailer combinations before coming to the conclusion that the problem is down to the fact that a pickup’s hitch is positioned a long way from the rear axle. 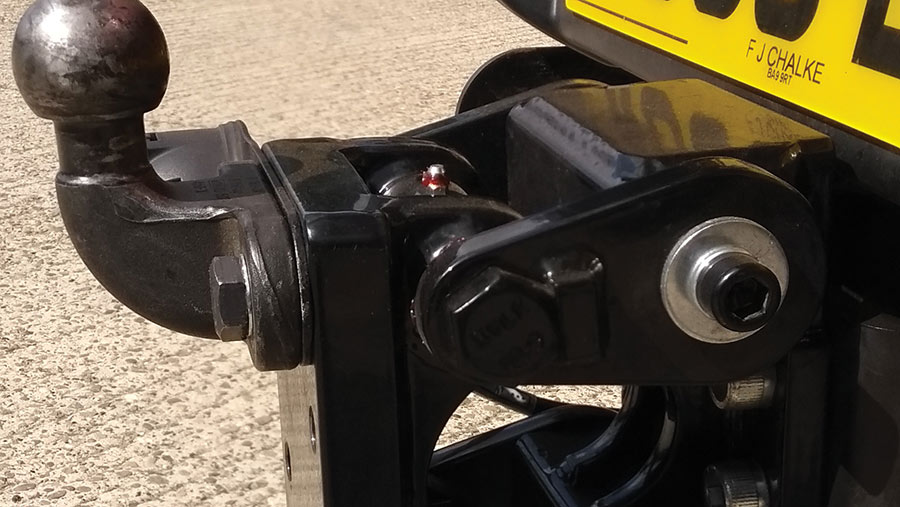 This distance creates a lot of suspension movement, which is exacerbated when there’s no weight on board.

To solve the problem, he came up with the idea of a damped hitch that isolated the movement of the drawbar from the towing vehicle.

His creation uses a short parallel linkage, which allows the hitch to move up and down, without pushing it too far from the back of the truck.

It also has rubber dampers incorporated into the pivot points to cushion the ride and take out the jolting and jarring.

These cylindrical dampers work in a similar way to those on cultivator disc carriers.

Although the concept is relatively simple, Mr Burt says a huge amount of time went into sorting the geometry and finding a rubber compound that gave the ideal level of damping.

He planned to put the hitch into production, but in order to sell them he needed to put it through Type Approval, which was prohibitively expensive.