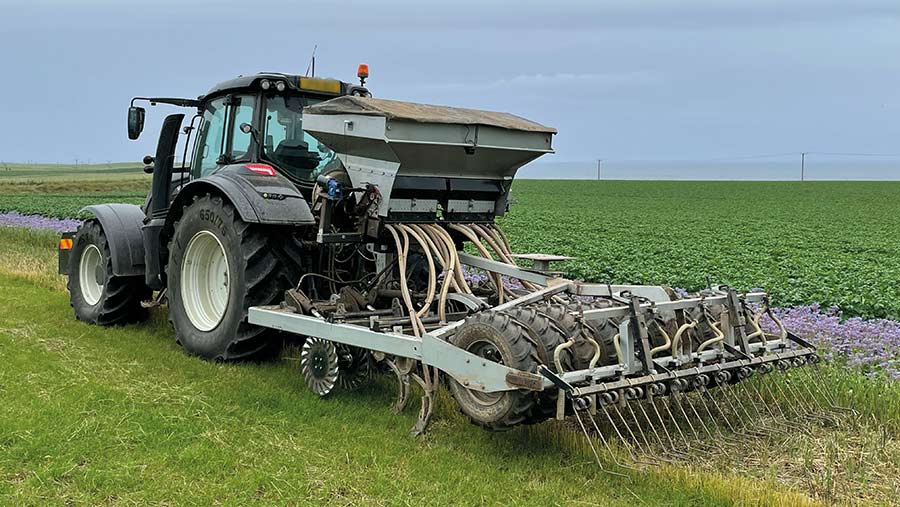 Craig Peddie’s drill get a highly commended accolade in our inventions competition.

Determined to pare down the intensive plough-based tillage regime on the family farm in Fife, Craig Peddie came up with the idea for a multipurpose single-pass tine drill.

This would be fitted with a set of subsoiling legs for establishing crops such as oilseed rape or beans, which could be removed and replaced by a set of wavy turbo discs for sowing cereals.

He embarked on the project in 2016, building a heavy-duty box section frame to carry all the components. At the front of this, he made carriers for five subsoiler legs, complete with hydraulic auto-reset protection. These can work to a depth of 330mm, which is the limit of what his 195hp Valtra T194 can pull.

The legs remained the primary cultivating element for a few years, until the farm’s soil structure improved and he could get away with shallower cultivation when establishing cereals.

The is when he introduced the wavy disc option, building carriers that mount to the auto-reset assemblies. This discs sit in line with the rear tine coulters and are angled so that they cut a slot for the seed and work up some tilth.

Mr Peddie designed the carriers in CAD and got the steel laser cut for a high-quality finish and accurate fit.

Seed placement is carried out via a twin row of pigtail tines mounted on a parallel linkage, and seeding depth is adjusted using shims on the hydraulic rams.

Interestingly, the rear tyre packer is fixed rigidly to the frame so that it remains level, with the subsoiler/disc units and pigtail seeding tines being adjusted independently.

Metering and seed storage is in the hands of a 600kg-capacity KRM hopper from an old Roger drill that was purchased for £1,200.

This came with a simple mechanical metering system, which Mr Peddie later upgraded to a Weaving/RDS variable-rate kit.

Finally, he fitted a mounting point and pipework for a KRM seeding unit that dribbles slug pellets behind the packer roller, before a following harrow finishes the job off.