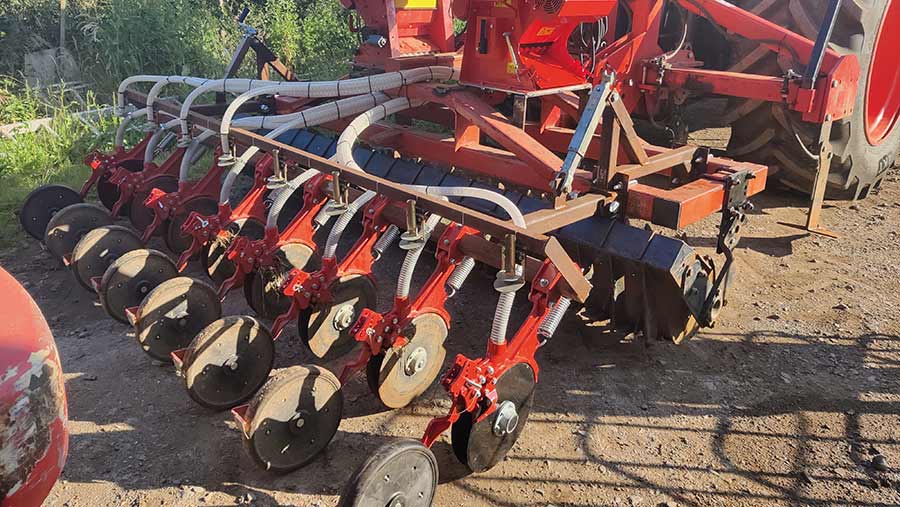 Having lost his job as a result of Covid-19, Mr Carnell went out on his own and formed a business called Tramline Tec.

It specialises in making and modifying agricultural equipment and fitting it with high-end technology such as Isobus controllers and Canbus wiring systems.

The oilseed rape seeder was one of his first projects and, as the customer was farmer and precision farming specialist Will Mumford of AS Communications, he had plenty of technology to play with.

A 3.6m Quivogne subsoiler provided the base for the outfit, to which he added a couple of legs and reduced the spacing from 50cm to 40cm.

The aim of this was to improve the density of the crop canopy, as previous crops drilled at the wider spacing had some gaps.

Rather than cutting and rewelding all the leg brackets, he designed some spacers using CAD to get them in the ideal position.

As the machine was intended to be low disturbance, he also cut the wings down so that they didn’t move too much soil.

To get the crop off to a good start, he added liquid fertiliser tubes to the rear of the legs. These are fed via a tank mounted on the tractor’s front linkage, which is controlled via Isobus using Trimble’s Field IQ system.

This gives the option of variable-rate application and section control so that the flow switches on and off automatically at the headlands.

Behind the legs, he fitted a toothed packer roller to consolidate the surface ready for a set of Weaving double-disc coulters.

He mounted these in line with the subsoiler legs on his own tool bar and frame, which has manual depth adjustment.

To give the option of establishing a cover crop, he fitted a second set of seed tubes with spreader plates.

Both the disc coulters and spreader plates are fed by APV seeder units with electronic metering. These are wired into a Muller Isobus controller so that they can be managed by a Trimble GFX750 terminal in the tractor cab.