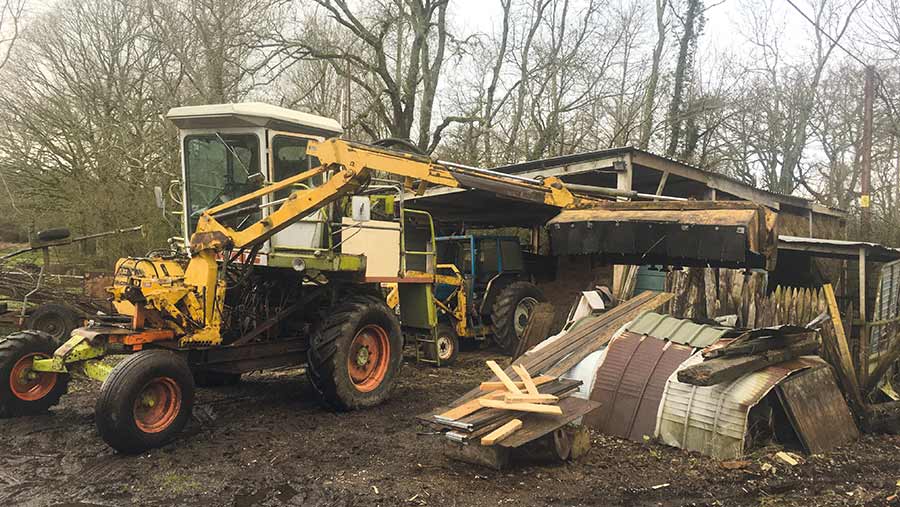 Most readers will view the gift of a broken 30-year-old combine as something of a hospital pass, but for Philip Harvey, it represented the opportunity to build a bespoke self-propelled hedgecutter.

A bit of lateral thinking was required to make good use of the Claas Dominator 86, which had sat idle for the best part of 10 years and only resurfaced from the barn last summer to donate its grain elevator gearbox to the farm’s slightly newer Dominator 98S.

After taking ownership of the clapped-out combine, Mr Harvey – who lives and works on a farm near the Dorset/Wiltshire border – cut off the rest of the threshing gear, leaving just a bare chassis with a cab and engine at one end.

The layers of tin panelling were particularly hard to remove, he says, having endured years of weather exposure that had caused serious rust issues.

After blasting the 6in of grime away from the 120hp Perkins engine, he set about designing a means of mounting a £400 6m McConnel PA97 hedgecutter, which itself had been treated to a set of new bearings.

Mr Harvey’s first major job was to shorten the combine’s chassis to make it a little less cumbersome for hedgecutting duties.

In the end, he used a few lengths of RSJ to form a completely new chassis that he attached to the front of the original combine – where the feeder house and header would have been.

This was around 3m shorter than the original chassis, and mounting the rear axle at the front meant he would have a good view of the hedgecutter.

This significant alteration also allows the machine to run through its standard forward gears.

Mr Harvey decided the combine’s threshing drum drive, which ran from a variable-speed pto, was ideal for his hedgecutter, so he made a new shaft and pulley arrangement to transfer the power.

The hedgecutter was then mounted in front of the cab and a little off-centre to avoid the arm colliding with the break-back mechanism triggered.

Mr Harvey linked the break-back ram into the existing header hydraulic outlet, while the hedgecutter’s electronic box was attached to the back of the cab and neatly concertinas out the way to allow access in and out.

Reconfigured tread plates at the back provide a walkway alongside the engine, and there are plans to get a number of covers made up to hide the hydraulic cables under the cab.

So far, he has just used it on the farm as it isn’t road registered, but he has been surprised at how well it works and how manoeuvrable and stable it is, even at full reach.

Apart from the cost of the hedgecutter and the welding rods, was an impressively cheap build.