See some of the best, including Tom Jefferies with his front linkage conversion and Charlie Land’s linkage-mounted mudguards.

The box-section frame and chequerplate base – together with reflectors and paint – cost £450 to assemble.

It allows him to carry races and gates, or the ATV, on the front of the tractor – held in place by ratchet straps – while the stock box is hooked on the back. 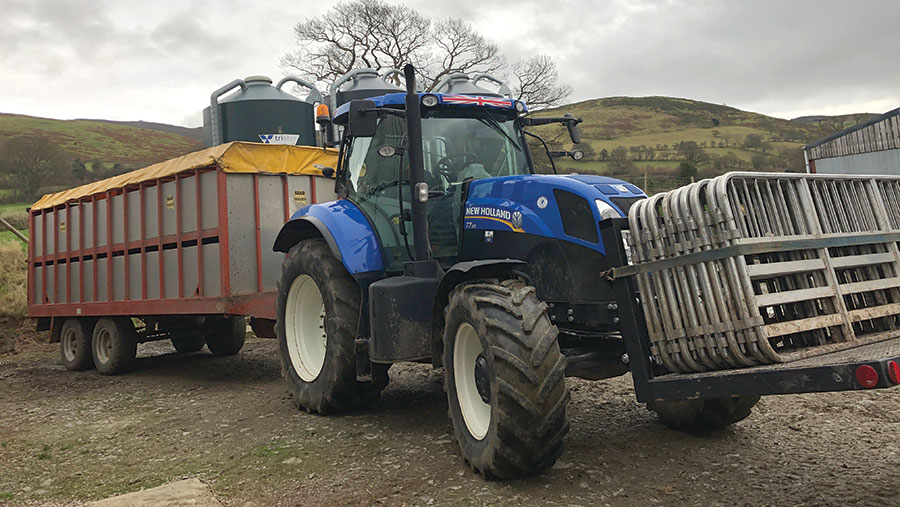 This has turned out to be particularly useful as the farm fattens lambs 30 miles from its base, saving two people transporting all the kit across separately.

After purchasing a front-mounted mower, Niall Murphy decided he needed to come up with a way of improving visibility for him and other motorists when pulling out on to the road.

His solution was to mount two night-vision cameras on the mower bed – one looking left and one right – and add lights protruding above the mower guards so drivers can quickly spot the mower as he is inching out. 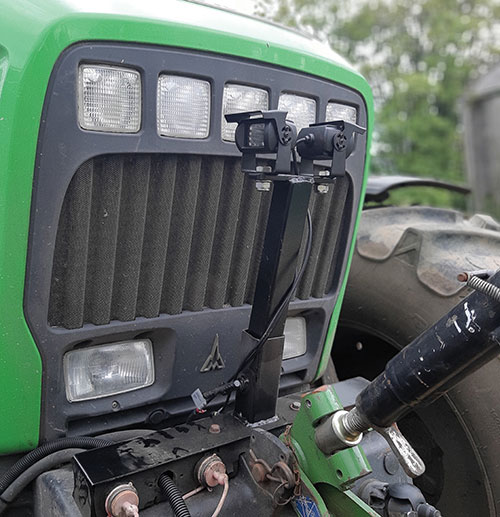 To make use of the cameras when he isn’t mowing, he also made a bracket to attach them to the front of his Deutz-Fahr X720.

This has a fairly long bonnet, so the cameras significantly improve safety for other jobs that involve driving on the road.

The cameras were purchased online for £70 apiece and rather than opting to view them on a split screen, each has its own large display.

Somerset farmer Tom Jefferies and his brother, Josh, designed a front linkage adaptor that allows them to harrow and aerate grassland at the same time.

The new frame was constructed predominantly from box section, with flat plate used to form the mounting clevises. 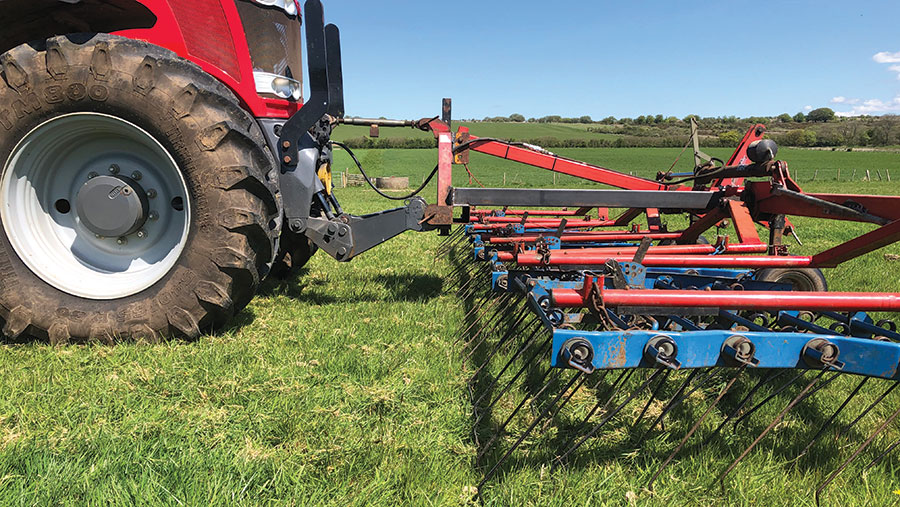 It clamps around the main beam of the Hatzenbichler harrow and stretches over the tine assembly to a new linkage at the rear of the machine.

Mounting to the Massey Ferguson 7620’s front linkage is via an old scraper A-frame. Other bits used in the build include muckspreader repurposed as reinforcing plates.

Pairing the grass harrow and Browns Slitmaster aerator has saved countless field passes and it also appears to have impressed some of the neighbours, as Mr Jefferies has landed several contracting jobs.

In a bid to keep roads as clean as possible during the sugar beet lifting campaign, Paul Spinks from Skeyton, Norfolk, made some clever modifications to his Suton sweeper brush.

This involved extending the original 1.75m rotor to 2.25m – tailoring it better to the width of his tractor – and adding a separate 0.5m unit to the rear, set at 90deg to the direction of travel. 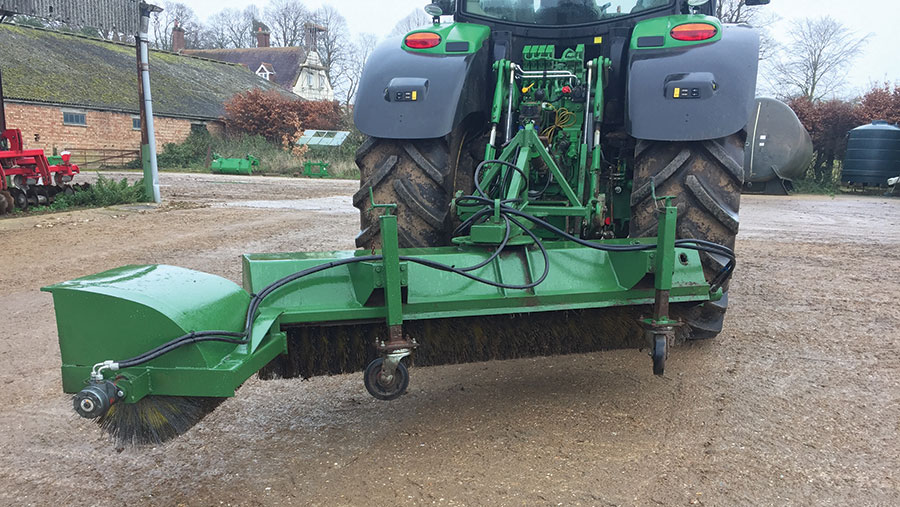 This flings the slop well away from the edge of the road so vehicles hugging the verge don’t end up splashing it back onto the carriageway.

It was put together over a couple of days using recycled metal, a few extra brush sections and a second hydraulic motor borrowed from Mr Spinks’ home-made chaser bin.

The kit, which fits pretty universally to all 6R tractors, was made from 75x25mm steel off-cuts combined with worn-out conveyor belts previously used on concrete crushers. 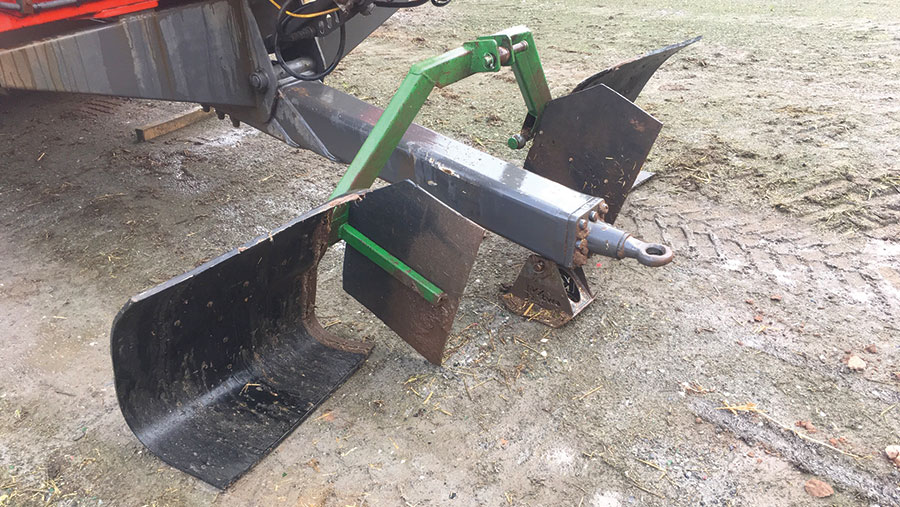 The only cost was for the welding gas and wire, electric and spray paint, but if it was built with new materials, Mr Land reckons it would cost roughly £80.

To drop them off, he typically sits them on the drawbar of a trailer or props them against a wall.

A ground-driven straw press built in the farm workshop by Stuart Pears and Kevin Lester, from Faldingworth, Lincolnshire, has helped put a stop to regular blockages under the tractor and improved the flow of material into the baler. 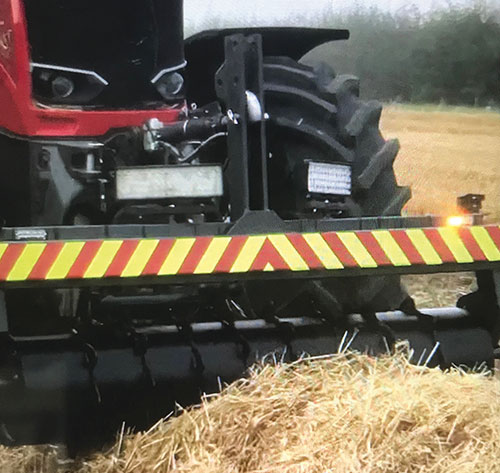 The front-mounted kit was built predominantly from old power harrow parts found in the hedge, with the 250kg packer unit forming the main press.

This can be filled with water to add more weight, if needed.

Warning lights across the front help when pulling out from concealed gateways. The total cost was £110.

Lincolnshire farmer Paul Woolsey needed a lifting device that would work on the rough ground in his shed to help him split a David Brown 1490 without spending thousands of pounds on expensive engine hoists. 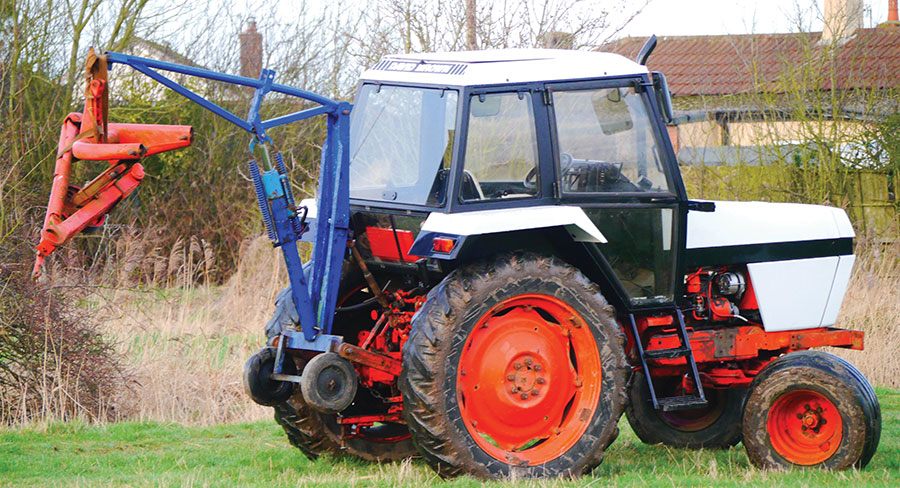 His design uses parts cobbled together from his yard, including an old plough ram, which had to be welded into a tube to make it longer.

The top lifting bar is reversible to gain extra height and wheels were added at the base to take the weight of the heavier items, such as the David Brown’s engine.

Fine adjustments can be made with the top link for lining up gearboxes. All in, the build cost half a box of welding rods over a few afternoons.

It has already proved extra useful for other lifting and shifting jobs.

David Cook grows a small area of potatoes for farm shops near Preston, Lancashire, and has built a one-man lifter that chops the tops and loads into a trailer towed behind.

The starting point for the project was a single-row Johnson digger with 22in webs that Mr Cook bought for £400.

To the front of this, he has added a flail, which has been fashioned out of parts scavenged from a Ransomes self-propelled mower. 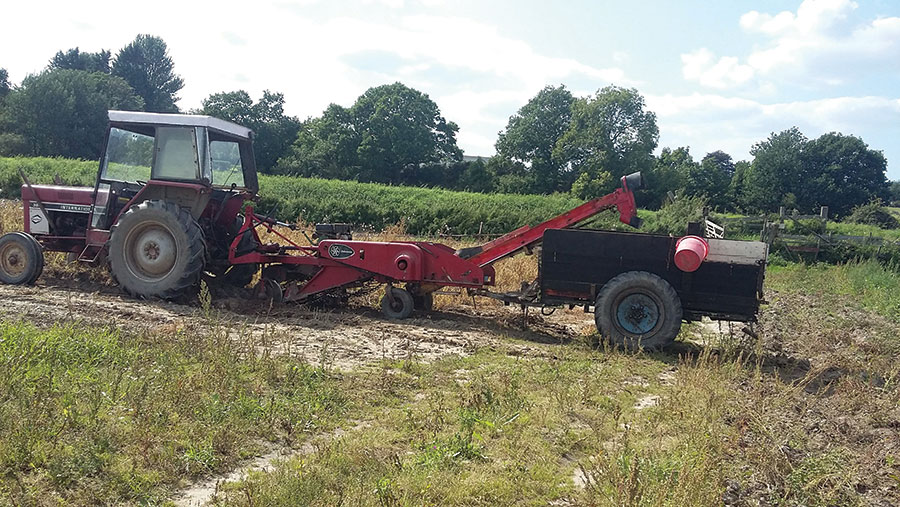 These include the petrol engine and the original grass-cutting cylinder, which has been cut down and fitted with home-made flails.

The height of this can be adjusted so it’s skimming the top of the ridge.

Finally, a cut-down elevator from an old Ransomes Faun lifter was added at the rear to load into a trailer towed behind.

Mr Cook admits that it’s a bit of a “Heath Robinson” set-up, but it only cost £600 to put together and will comfortably lift 4t a day.

It’s also the only outfit he has seen that does all these jobs in one.

Spending 1,500 hours a year driving a hedgecutter for JS Rose Country Contractors in Dorset prompted Tony Adams, known locally as Tonka, to develop a nifty solution to save chronic neck ache and make his life a little easier.

The John Deere 6920 he drives has standard powershift buttons on the right-side of the tractor, but no way of changing gear on the left side, where the hedgecutter controls are positioned. 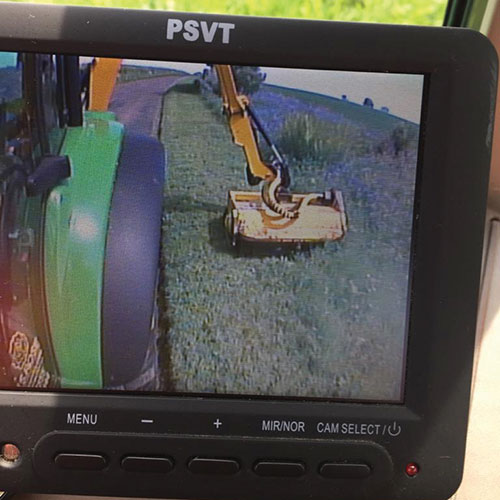 So, he extended the wires under the seat from the shifting button on the right and mounted a new £40 switch next to the hedgecutter joystick.

He has also installed a rear-facing camera on the bottom of the external mirror that gives him full view of the trimming head.

His work involves a lot of council verges and mowing around signposts and Armco barriers.

He says he is so used to it that he now controls the hedgecutter solely from the camera’s 18cm display, even when the head gets cosy with the tractor’s wheel.

It cost about £100 for the camera and screen, but has transformed his job.