Entries into grassland category of this year’s Inventions Competition centre on ways to improve the efficiency of resowing, rolling and ridding fields of weeds. Scroll down to see some of the most creative ideas.

See also: 9 steps to getting a spring reseed right

A modification to his set of 6.3m He-Va Cambridge rolls means Cornish dairy and beef farmer Andrew Carbis can now sow grass and roll in one pass.

The roller-seeder also opens up the option of min-tilling stubbles without dragging trash across the field – a problem he was finding with his Accord DL seeders – and means he can evenly distribute grass without leaving rows and bout marks.

Mr Carbis says his version of the concept was put together for £2,720, including the cost of the air seeder – significantly cheaper than the £9,000 that Opico wanted for the kit. 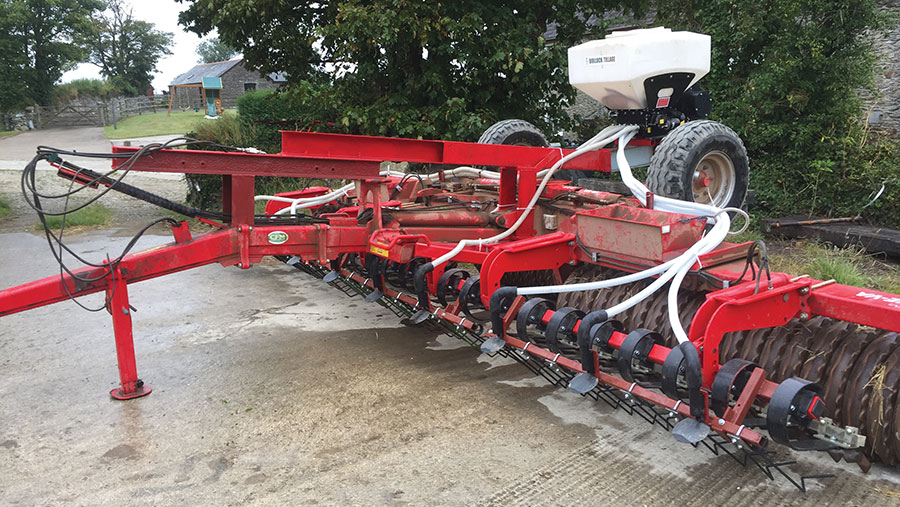 Central to the design is a nine-outlet Bullock Tillage air seeder mounted on a cantilever steel that runs from the drawbar and juts out over the rear wheels. This layout allows the roller to fold up horizontally towards the tractor and keeps the hopper level. It also means he can see the seed level from the cab and fill the hopper by climbing on the roller rings.

Seed pipes feed spreader plates mounted in front of a row of Accord following tines, which are brought into work at the same time as the hydraulically controlled He-Va Shattaboards.

Output is adjustable from the cab and typical travel speed is 6kph. In loose ground, Mr Carbis says he rolls once before making another pass with the seeder on. He then usually rolls again to leave a really tight seed-bed.

Land agent Sam Woodhouse made the most of his furlough time by building a weed wiper to help get rid of Cumbrian rush infestations in grassland.

The 3m-wide implement is towed behind a Honda ATV and was assembled using fairly cheap materials, including scrap metal to form the main A-frame and a spray tank he already had. 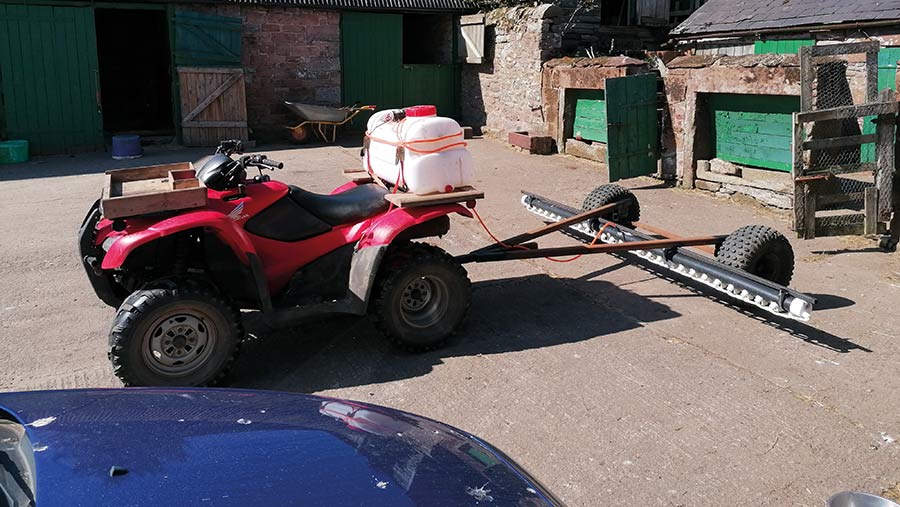 This is strapped to the ATV’s rear frame and it primes the horizontal section of sealed wastewater pipe until the overlapping 250mm lengths of nylon ropes are damp. These came as part of a Greenleaf wick string kit.

It runs 250mm off the ground and uses very little herbicide, Mr Woodhouse says. The next job is to add height adjustment. Total cost was £150.

During the first lockdown of 2020, Rob Chatwin and his contractor friend, Matt, designed and built a rear tow kit for a 2.4m ballast roll.

This has a sturdy box-section frame running over the top of the roller, with a lorry axle sitting at the rear on pivoting arms.

A pair of hydraulic rams run from the top of the frame to the axle, allowing the roller to be raised or lowered as required.

The duo made use of parts and steel they already had and only outsourced the rams, which were custom-made by a local hydraulic company. 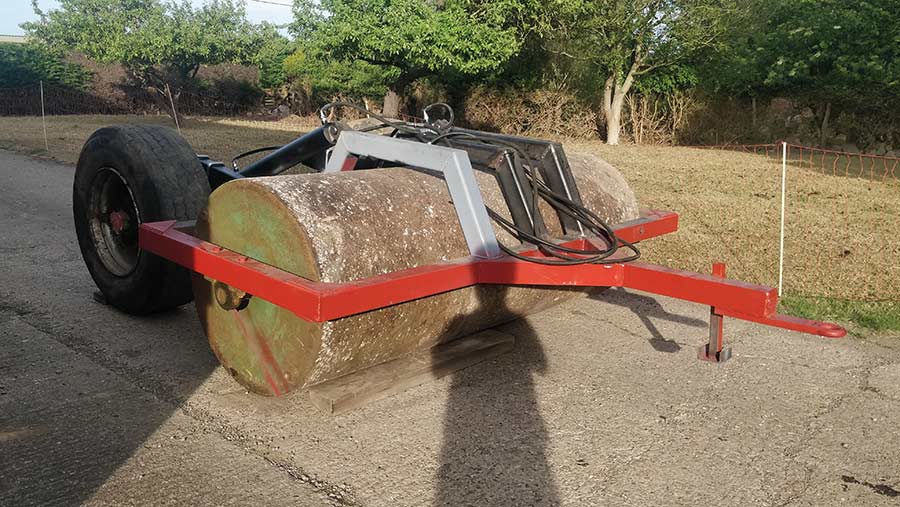 It was mainly constructed using scrap found on the farm, including absorbent bristles from an old wheel brush previously used for cleaning cars. A 12V pump feeds the nozzles from the 200-litre tank above and the reel is driven hydraulically. 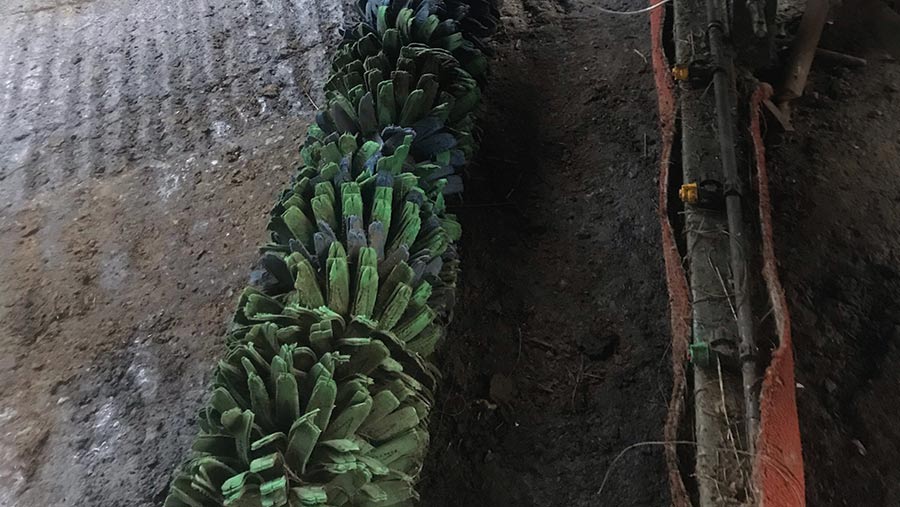 At 2.4m wide, it can be used in tricky field corners and height is adjusted using the tractor’s link arms.

Mr Dolan says the advantage of using bristles rather than rope is that they reduce the likelihood of drips and increase the surface area for better contact with the weeds. All in, he reckons it cost about £400 to build.

Keeping his Kuhn wrapper supplied with rolls of plastic was a never-ending task for 22-year-old Matthew Kirk.

So, instead of using a quad bike and trailer that only had room for four at a time, he manufactured a wrap carrier that could be lifted with the bale squeeze rather than pallet tines. 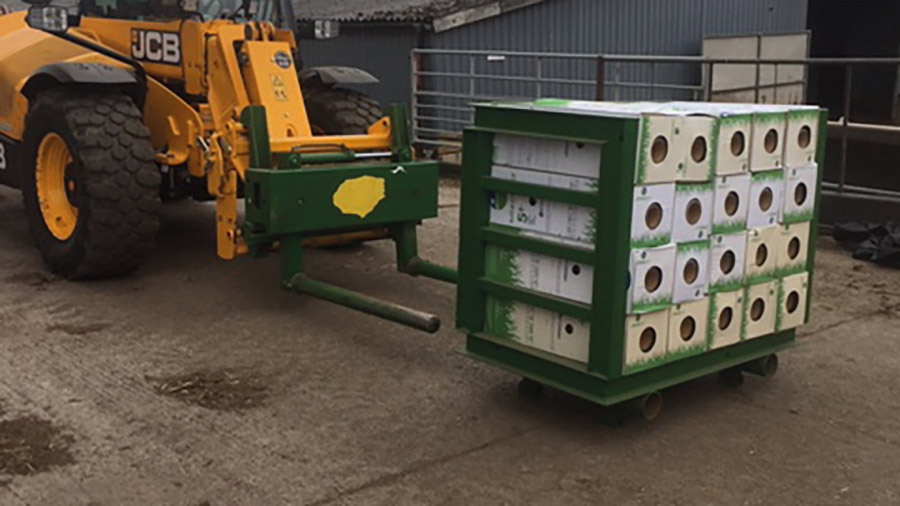 The base of the frame was formed from a recycled diesel tank, which was heavier than necessary but helped to keep the cost down. Below that, he attached two steel tubes for the squeeze arms to slide through. In work, the telehandler headstock is crowded back and the tines widened to hold the frame tight.

It can transport 20 rolls and has been designed so there is no chance of them falling out. He says it has made keeping up with the baler so much easier, particularly as it can be carted around with the JCB telehandler and doesn’t require any other attachments.

A mini spot sprayer has allowed Lindsay Gracey of Rathfriland, Country Down, to rid grassland of prominent weeds without relying on a hand lance.

It fits to the front of any quad bike via an angle iron frame and is paired with a regular ATV sprayer mounted on the back. A length of hose takes the chemical to a bank of five triggers that engage the 10 spray nozzles in pairs.

Total cost was £300, with most of the bits sourced from eBay. 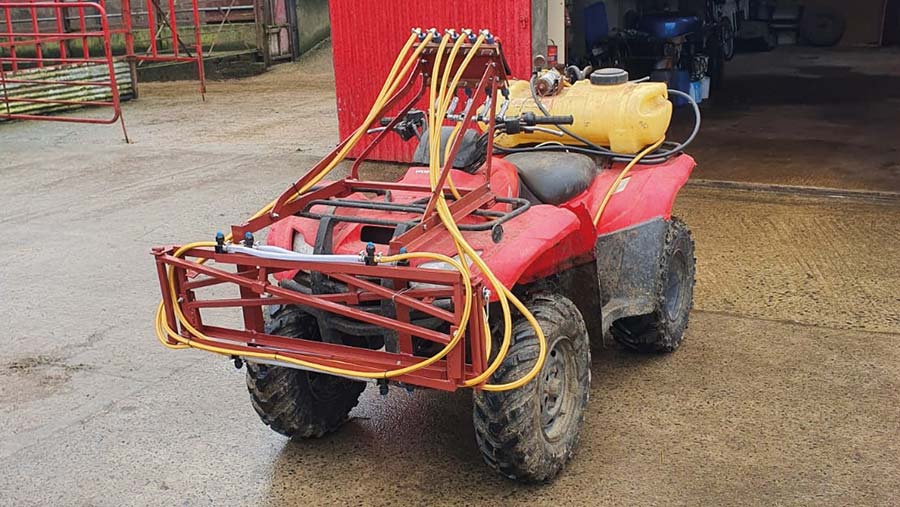 After having two ATVs pinched, David Powell decided to stiffen up his defences with a lock-up box.

It started life as a large diesel tank, which he has heavily reinforced. To breach the container, thieves first have to get through a shrouded heavy-duty padlock and several other awkward safety features.

The tank rolls on castor wheels and opens on hinges, making it easy for the rider to drive in and dismount. 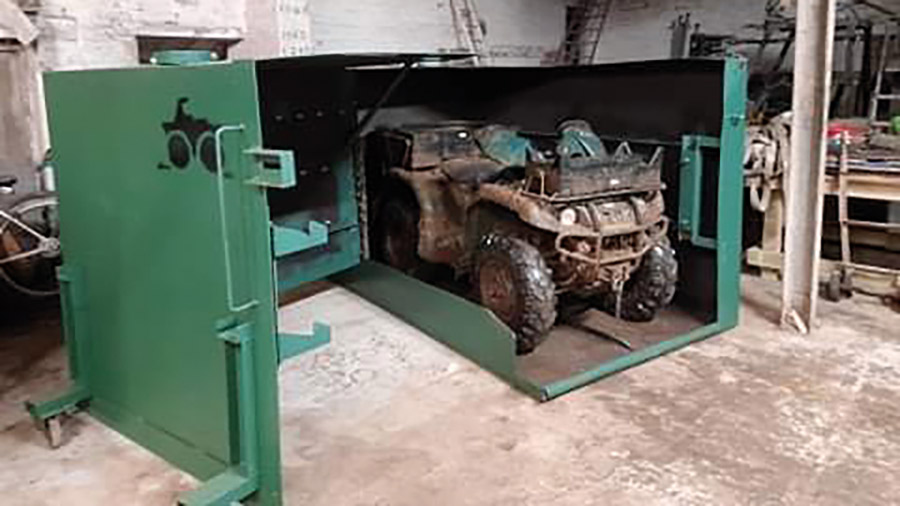