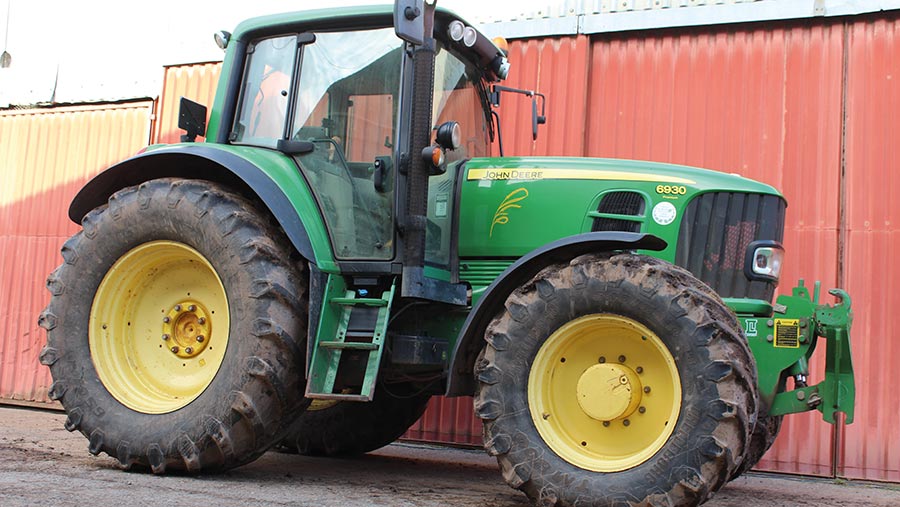 Tractors have a habit of breaking down at the most inconvenient moment. Independent mechanic Lee Morley takes a look at John Deere models, offers a few tips to reduce the likelihood of costly breakdowns and spot problems before they get too serious.

Lee Morley has more than 20 years’ experience of working on John Deere tractors and machinery.

Before setting out on his own, he worked for Yorkshire dealer Ripon Farm Services and Tallis Amos in Worcestershire.

He now operates from the family farm in Clifton-on-Teme, Worcestershire, and continues to specialise in repairing, servicing and rebuilding Deere equipment.

He also works with other brands from time to time. 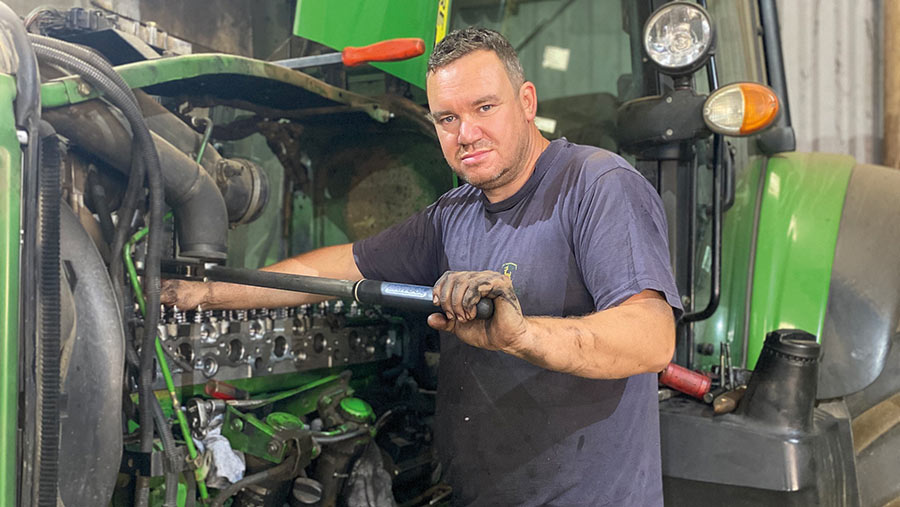 A fairly frequent job on 6030 series tractors is replacing the Canbus connectors, which are responsible for a series of random error codes popping up on the Command Center screen – 2000.09 in particular.

Tractors with mechanical spool valves have four connectors: one in the engine bay, one in the fuse board behind the seat, one under the range lever and one by the side of the fuel tank. Those fitted with electric spools have another near the hydraulic pump.

For someone that doesn’t know what they’re doing these can be a bit of a fiddle to fit, but an experienced mechanic can do them in about an hour – expect to pay about £37 each for them, plus labour.

Occasionally, a similar set of codes can be displayed if the ECU has failed.

A simple way of telling the difference is that the engine hours – which are stored in the ECU ­– aren’t displayed on the dash.

Replacement ECUs can be found for about £1,000, but they need to be programmed by a main dealer.

Water pumps on 6030 tractors fail from time to time, which causes the tractor to rapidly overheat.

However, the fact that the tractor gets hot so quickly means it’s easy to spot before any damage is done.

It’s a simple one to diagnose, as the gauge shoots straight into the red and the overheating warning buzzer goes off.

Water pumps cost about £140 and they take roughly three hours to replace.

A simple circlip failure was responsible for causing a pto pack to stop driving on a 7930.

The tractor had been running a big square baler and the jolting caused the clip to snap.

This led the internal lubrication valve on the clutch pack to move, dumping all the oil out of the system every time drive was engaged.

The part cost just £2.10, but it took Mr Morley a whole afternoon and evening to fit.

It involved dropping off the pickup hitch assembly, draining the back-end oil and removing the pto housing, before accessing the clutch pack.

The main gremlins with 30-series John Deere tractor engines are head gaskets and emissions-reducing add-ons such as the EGR valve and cooler.

Serious engine failures are rare, but they can happen, particularly if the driver doesn’t spot the early warning signs. 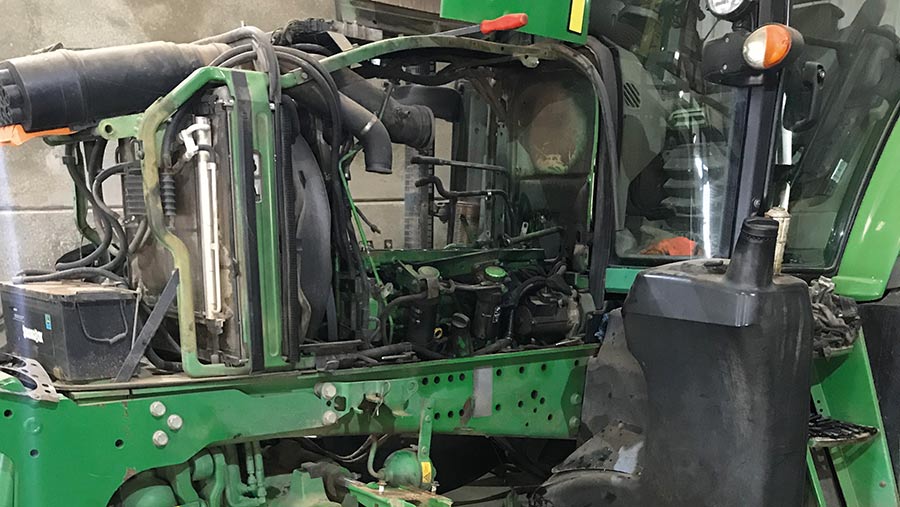 Recently, a 6930 on about 7,000 hours dropped an exhaust valve on cylinder number five and the operator continued to drive it.

Repeated hammering of the piston into the valve caused metal fragments to move throughout the engine, stuffing the turbo and the cylinder head, and eventually causing the piston to seize in the liner.

Putting it right involved fitting a complete top-end engine overhaul kit, including pistons and liners, a cylinder head assembly with gaskets and uprated bolts, plus a turbo. 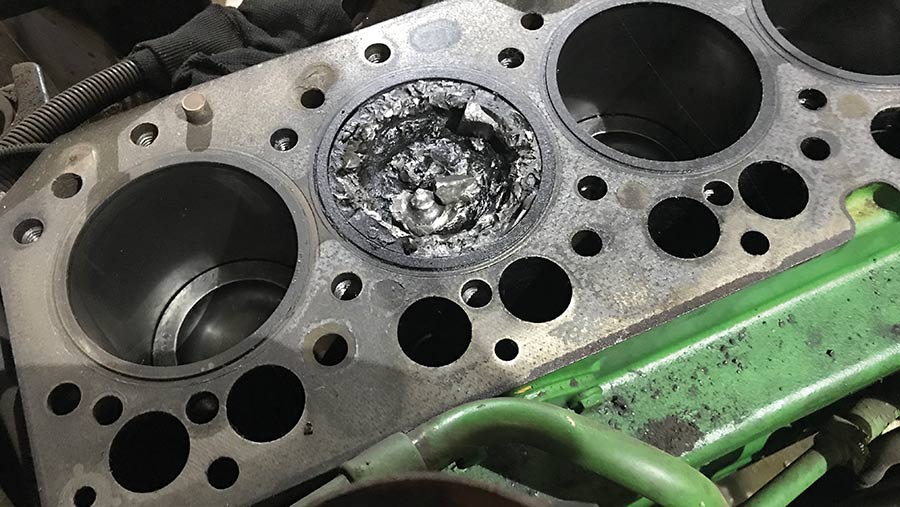 If the tractor hadn’t been driven with the broken valve, it would have been a much cheaper and simpler fix.

Deere’s Auto Quad has a good reputation for reliability and failures are rare. But if the tractor has done a lot of heavy work, clutch packs can wear.

Recently, Mr Morley tackled this problem on a 6620. The tractor had clocked up about 7,000 hours and the teeth on the clutch pack that controls third and fourxsth speed had worn to the extent that it was spinning in third.

He dropped the transmission out of the tractor, stripped it down to access the pack and then rebuilt it. The job took three days and the parts cost about £3,000.

One of the older tractors to pass through the workshop recently was a 3050 that had a damaged synchro ring on fourth gear.

This was caused by a broken circlip that resulted in too much end float on the shaft, which eventually took a few teeth off.

Getting to it involved taking the cab off and stripping the gearbox down, before rebuilding it with a second-hand shaft, gear and synchroniser sourced from Nick Young Tractor Parts.

While it was opened up, he also replaced the hi-lo and drive clutch. Total cost was about £5,000.

As John Deere runs a single oil supply for the back-end, brakes and transmission it’s crucial that discs are changed before they start breaking up and going around the system.

With sensible driving, brakes can last for thousands of hours, but heavy users can cause damage very quickly.

The discs themselves cost £150 to £200 each and it usually takes about a day to replace them. However, the costs begin to rise if they’ve been left too long and you need pistons and backing plates.

If the brakes have started to break up, the suction screen in the rear diff housing should be inspected for debris and cleared if necessary.

A freak lubrication problem in the back end of a 7530 caused the Auto Quad transmission’s C and D range to seize to the shaft and damage the crown wheel.

To put it right, he stripped the tractor down, rebuilt the range portion of the transmission and fitted a replacement crown wheel and pinion. These have to be replaced as a matched pair.

It was a big job and the bill ran to about £8,000. However, it would have been far more expensive through a main dealer using new parts.