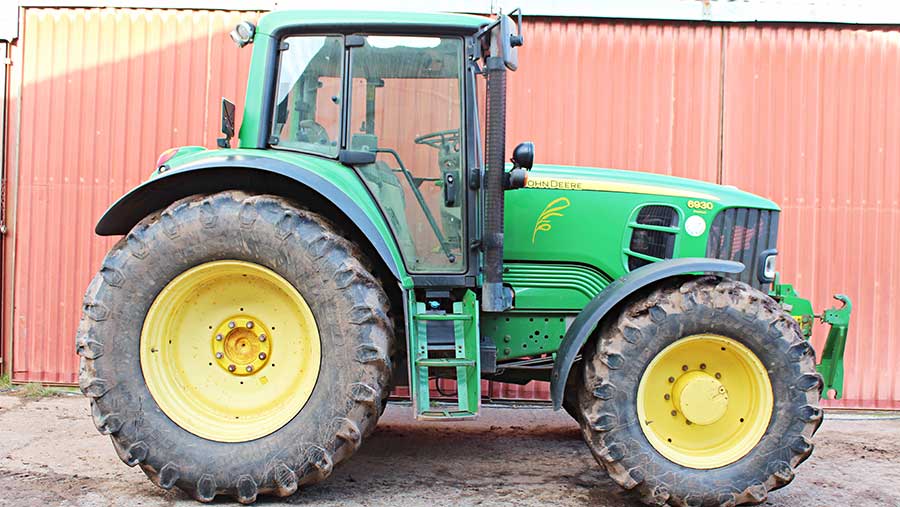 In the second-hand, mid-horsepower tractor market, John Deere’s 6930 Premium is arguably one of the most sought after.

Built in Mannheim between 2007 and 2012, this lightweight, powerful tractor offers up 155hp from its 6.8-litre, six-cylinder engine.

And thanks to its so-called Intelligent Power Management system, it will boost up to 180hp for pto work and haulage duties.

Strong demand means prices hold up well, with higher-houred early models just starting to drop below £30,000 and the newest, tidiest ones still nudging £50,000.

Like all second-hand tractors, they have their fair share of gremlins, many of which are associated with the engine. However, they’re generally fairly straightforward to spot and put right.

To help get the bottom of these niggles, we enlisted the help of Worcestershire-based independent John Deere mechanic Lee Morley.

He has almost 20 years’ experience with the brand, having cut his teeth at a couple of well-known main dealers – Ripon Farm Services and Tallis Amos – as well as running and maintaining machines on his own farm.

The tractor he’s talking us through is a 2007 Premium model with 50kph AutoQuad transmission. It’s clocked up about 6,788 hours and has had most of the typical 6930 tweaks over the years. 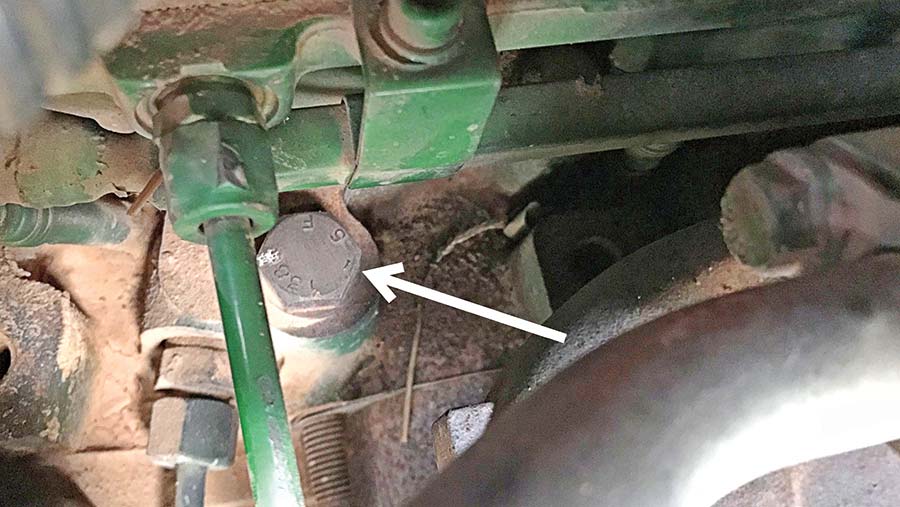 Anyone that’s had some experience with 6930s will know that the head gasket is probably going to go at some point.

This is largely down to the design and torque setting of the original bolts that meant the head didn’t sit down as tightly as it should. Typically it goes on piston six, as that’s the farthest from the water pump.

If a tractor has been religiously driven within its ideal operating temperature window (87-96C) then it is possible for the original setup to last into fairly high hours.

But realistically most with more than 6,000 hours on the clock will have had a gasket at some point.

If it’s been replaced properly, the fitter should have used Deere’s revised head bolts, which have a have a higher torque setting. These hold the head down tighter and prevent it going again.

Anyone buying one should look for 5F stamped on the bolt heads. Anything with 4F-branded bolts either hasn’t been done or was done using the original bolts and probably won’t last.

Failures are far less common with the revised bolts, but it’s still worth doing your bit to make it last.

That means keeping the radiator screens clear, blowing out the rad and making sure the coolant level stays on maximum, particularly when flogging it hard. 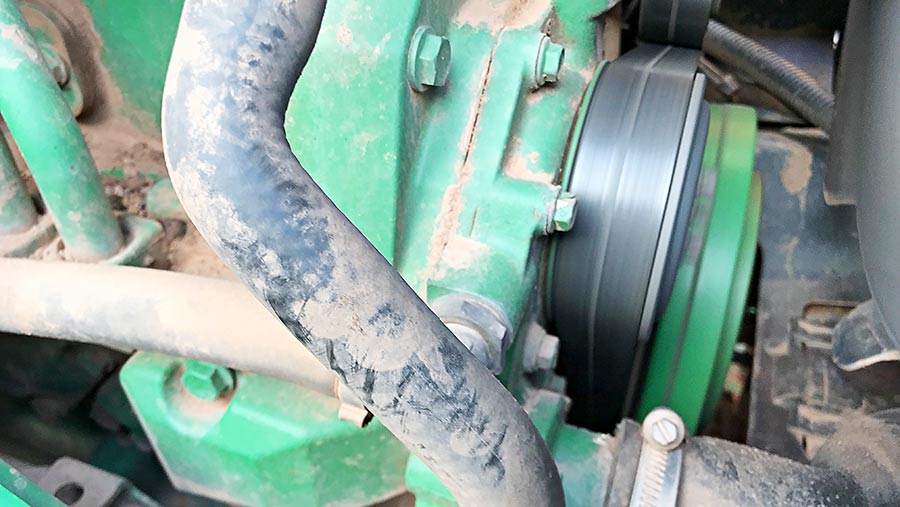 The plastic impeller in the water pump can also break up, which means no water is pumping around the system.

You can usually tell if this is the problem as the temperature gauge will very quickly run up to maximum.

To confirm this is the culprit, turn the engine off and let it cool. Then restart and see if it goes straight back up.

Valve clearances should be checked and adjusted every 3,000 hours.

If they’re left too long they will eventually get so slack that the bridge links can pop off.

If this happens, the exhaust valves won’t open, forcing the waste gasses out through the air cleaner.

So if the tractor starts popping like a Field Marshall, then this is likely to be the problem.

Often it can be fixed without having to lift the head, but it’s better to get the clearances checked to prevent it happening in the first place.

If a tractor hasn’t been run on squeaky-clean fuel then the injectors can play up.

Usually, the first sign of trouble is when the tractor repeatedly throws up an error code the fuel filter is blocked, even if it’s been recently changed.

This is because the injector won’t fire properly and causes too much fuel to run back through the leak-off pipe.

Once the damage has been done, the only solution is to fit new or reconditioned injector.

This needs to be carried out by a John Deere dealer or a fitter who has the correct equipment, as the injectors should be properly programmed before running.

To prevent it happening again, it’s worth putting an additive and anti-bug treatment in your main fuel tank, as well as an in-line filter. 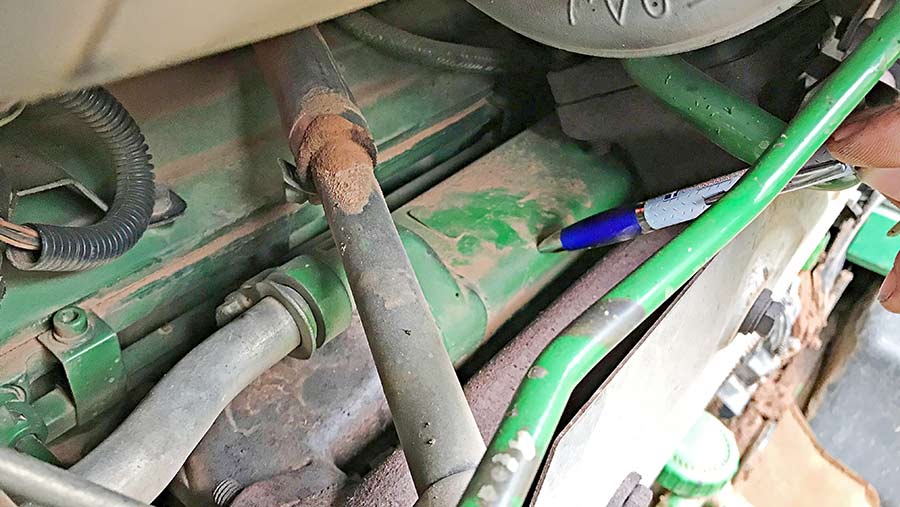 Deere’s work to meet the Stage 3a emissions regulations required at the time, meant it fitted an EGR valve to direct exhaust fumes back into the cylinders.

But before the gasses were fired into engine they also passed through an EGR cooler to bring the temperature down and prevent overheating.

Both of these components can give trouble, but the cooler tends to be the most common culprit.

If the tractor seems to have a mystery coolant leak, with no sign as to where it’s going, then it’s likely the EGR cooler is cracked.

Replacement units cost about £700 and the turbo and exhaust manifold have to be removed to fit it.

The EGR valve itself can stick and when this happens it also needs to be replaced.

It’s a pig to get out so it’s best left to someone who’s had some prior experience. They also need to be properly calibrated before fitting. 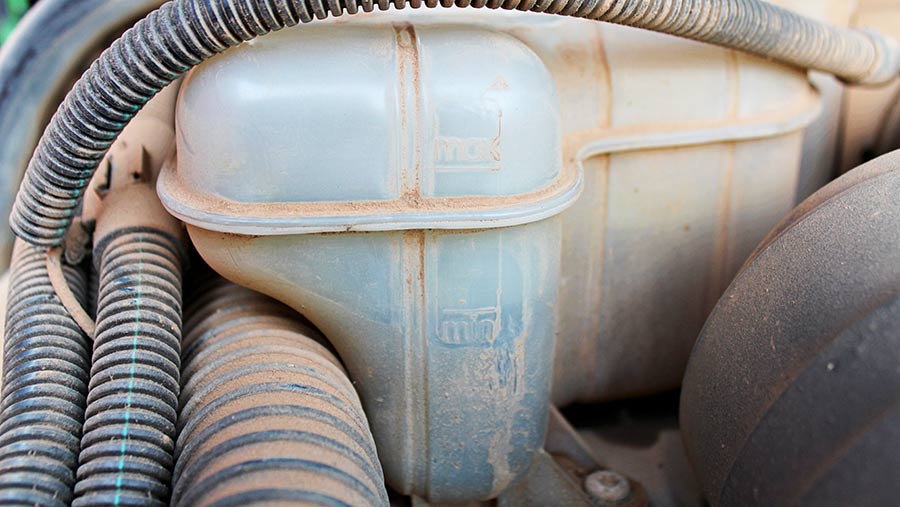 It’s important to keep the coolant level on maximum, particularly if working the tractor hard.

If the level does start to drop, there’s a greater risk of overheating and the tractor can throw up an error code that says it’s de-rating the power output.

As this liquid is also responsible for cooling the transmission, so you can risk overheating that too.

It’s normal for a 6930 to use a bit of coolant so it should be topped up fairly regularly with John Deere CoolGard. Standard antifreeze and water isn’t up to the job.

The most common external coolant leak is where the header tank meets the top of the radiator.

This happens when the original O-rings between the two become hard and brittle with age. Replace them and the problem should be solved very quickly and cheaply. 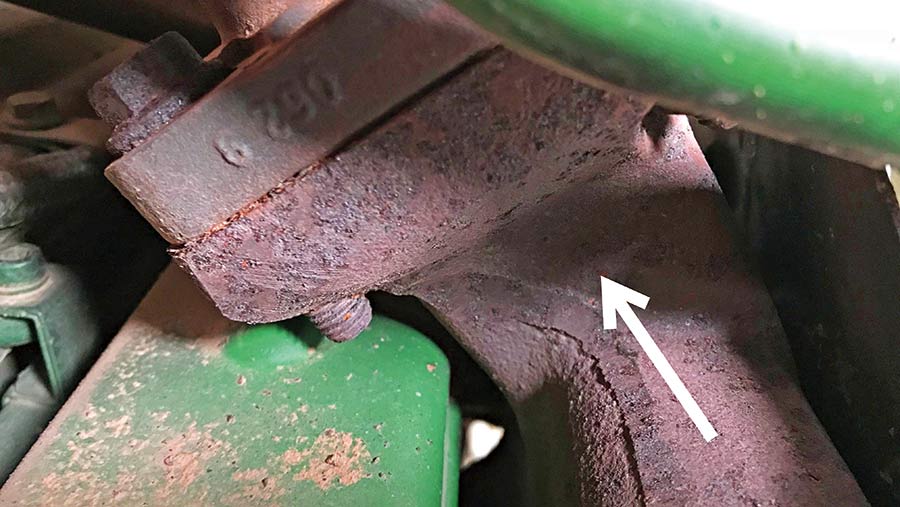 Original exhaust manifolds can crack where turbo bolts on. This is due to the amount of strain the heavy variable geometry unit puts on that area.

John Deere bought out a stronger modified version, which will have been fitted to many machines. But if you can see smuts building up on the valve cover and head, then this is likely to be your culprit. 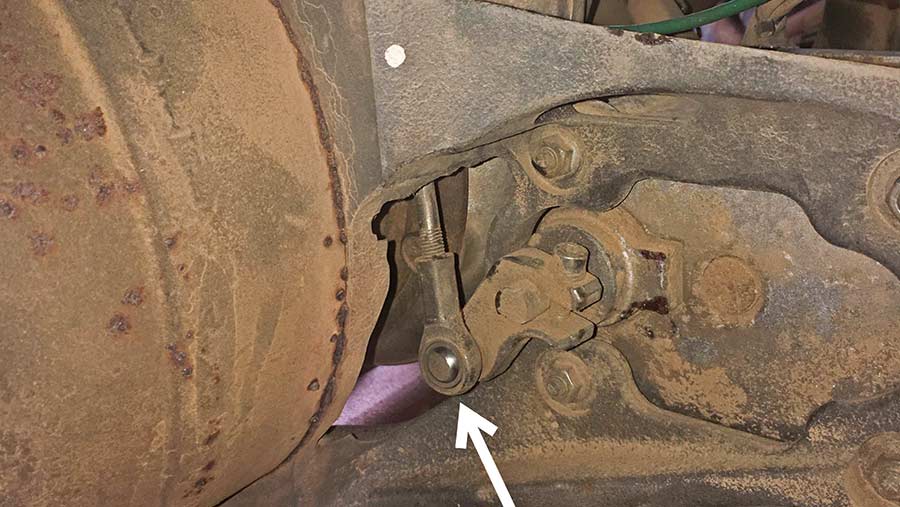 Vanes in the variable geometry turbo can seize up, so if you’re buying a used tractor it’s worth checking their condition.

If you reach up to the back of the turbo and lift the linkage it should drop back down again under its own weight.

This tractor has had a replacement turbo, so it has the newer-type linkage with a rose joint at the bottom. 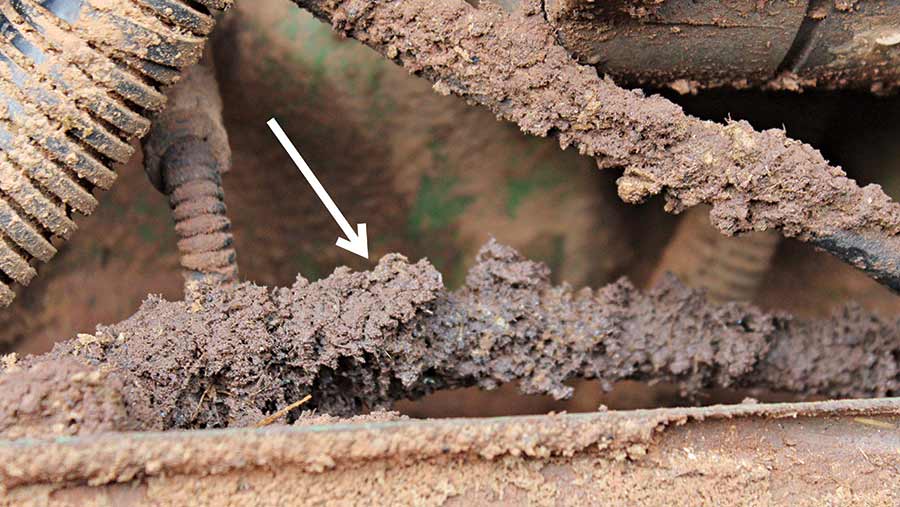 If a tractor starts well from cold, but only runs for a few seconds before cutting out, the problem is usually down to the braided fuel hoses.

These become porous over time, which lets air in and causes the fuel to drop back overnight. Flicking the ignition on for 30 seconds or so before starting will allow the lift pump to prime the system.

But a longer-term fix is to replace the hoses. It’s usually obvious they’ve gone as they’ll appear damp and will have dirt clumped around them.

If this doesn’t solve the problem, it’s worth checking the O-ring is fitted between the glass fuel filter bowl and filter.

Often people forget to reset this when they change the filter and this can also cause air to be sucked into the system. 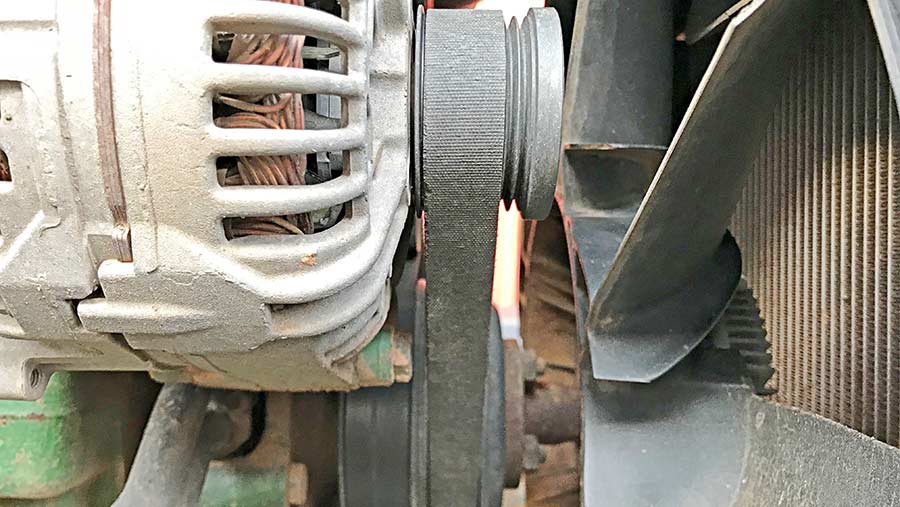 The alternator belt is a bit of a pig to change, so if it’s looking a little worn in the winter it’s worth sorting then, rather than having it go in the field.

Unfortunately, it’s too short to feed around the fan blades, so the fan has to be removed in order to fit it.

There’s no tensioner pulley either so you need to get a long bar behind the alternator bracket to get it tight. 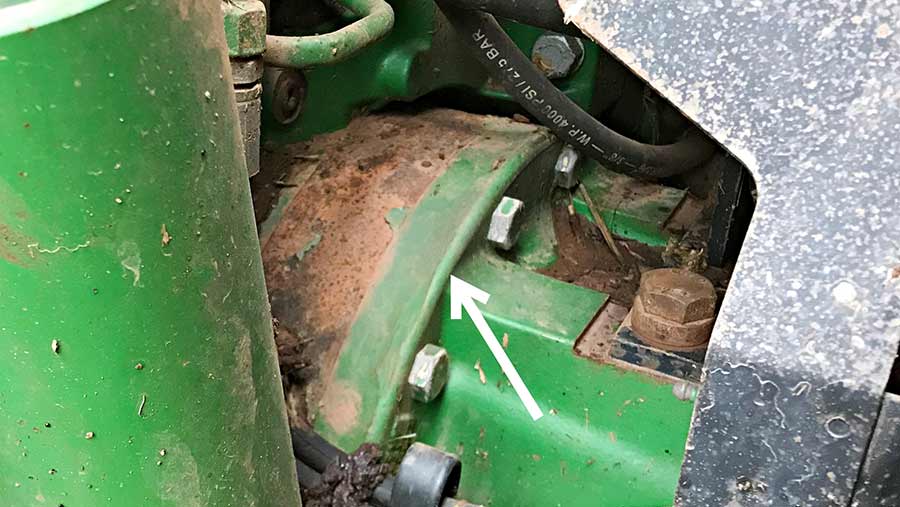 As John Deere runs a single system for the back-end, brakes and transmission it’s crucial that you change the discs before they start breaking up and going around the system.

If this does happen it causes thousands of pounds worth of damage.

Therefore, if you’ve just bought or are buying one second-hand, it’s worth getting them changed straight away so that you know where you stand. Unless the previous owner has just had them done of course.

The discs themselves cost £150 to £200 each and it usually costs about £700 to have a fitter replace them. However, the costs begin to rise if they’ve been left too long and you need pistons and backing plates.

With sensible driving, brakes can last for thousands of hours. But if someone stands on them down a steep bank without pumping the pedal to let oil flow around the plates, they can be completely cooked in minutes. 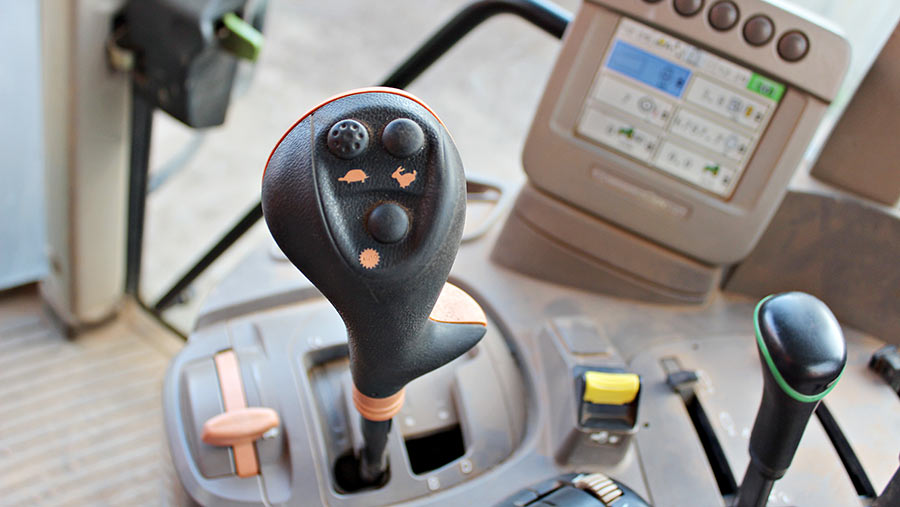 The AutoQuad semi-powershift gearbox was the most popular transmission choice in a 6930 and it’s rare for it to give any trouble.

If anything is to go wrong, it’s usually sticking valves caused by debris from brake discs that have started to break up.

In this case, the brakes should obviously be rebuilt and the suction screen in the rear diff housing should be inspected for debris and cleared. It’s also important to change the back-end filter every 750 hours and the oil every 1,500.

Although it doesn’t have the best reputation, the Autopowr stepless box in the 6930 also rarely gives trouble if properly serviced.

The manufacturer, ZF, introduced several upgrades from the version used in the 6920 and they seem to have done the trick. This box should be serviced every 1,000 hours. 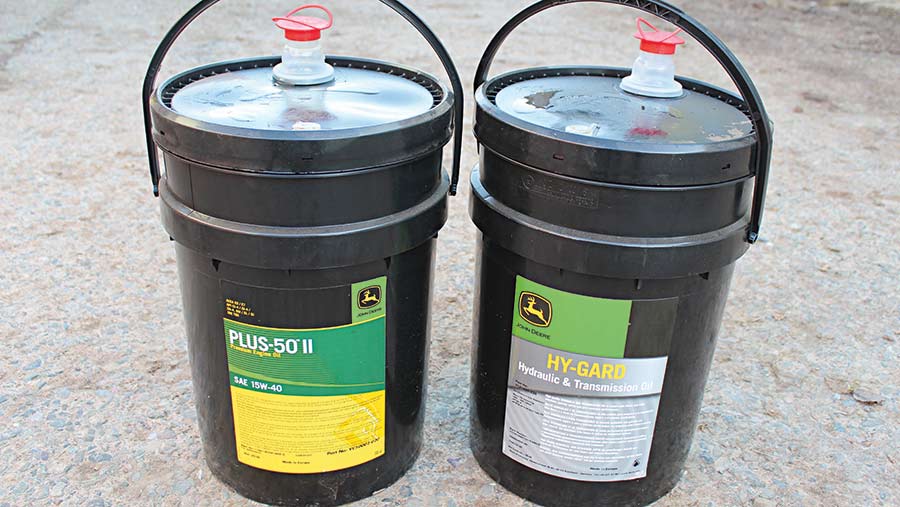 Generally, John Deere recommends using its Plus50 oil for the engine and HyGard for the back-end, axles and diffs and hubs.

However, any quality 15W40 semi-synthetic oil will be fine for the engine. HyGard is actually J20C grade oil transmission, so an unbranded version of that will be acceptable, too.

As for the front limited-slip diff, it’s actually better to use LS90 as those running on thinner J20C can develop a lot of chattering noise.

LS90 can also be used in the hubs of 40kph tractors, but not the braked version on 50kph machines – those need to run on J20C. 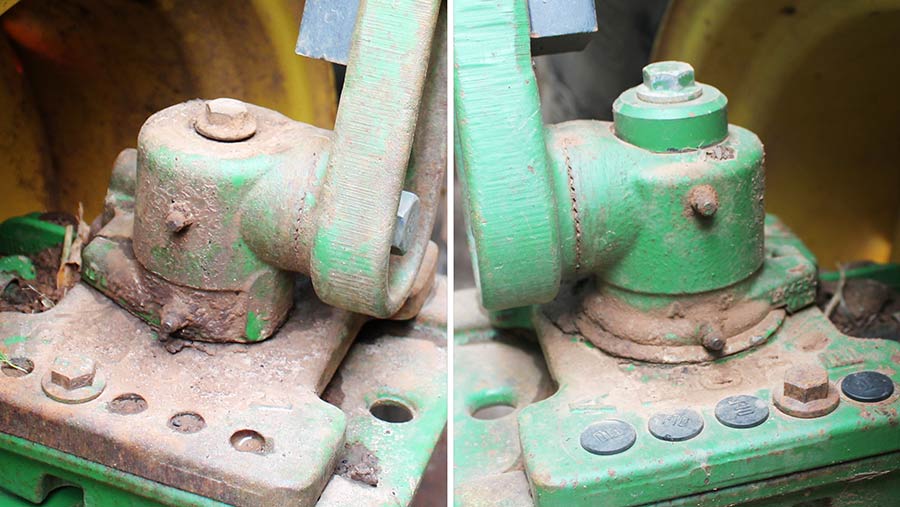 The original turnable fender brackets were a poor design and as a result quickly developed play.

John Deere introduced an improved version that solved the problem so it’s worth switching to these when the originals give out.

This tractor has one of each – the original version is on the left and the superior replacement is on the right. 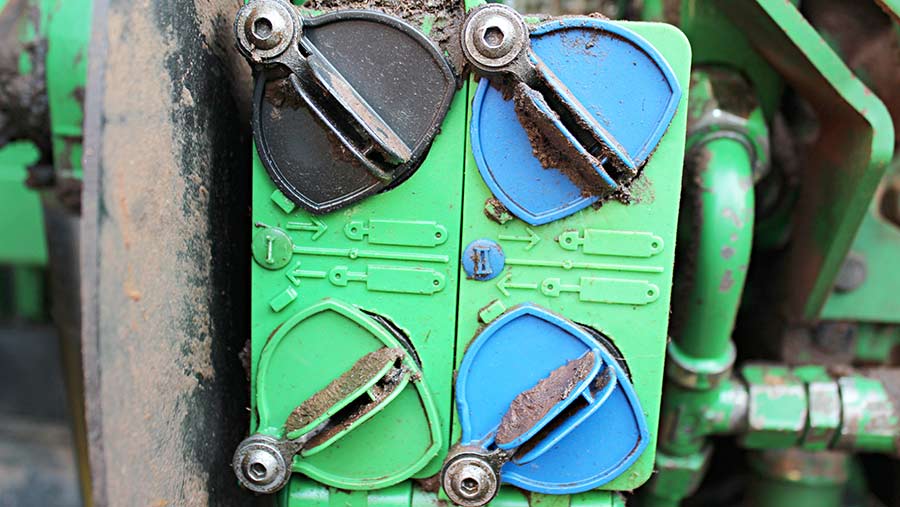 Rear SCVs can wear out and eventually they won’t hold pressure. So if implements are tending to creep the offending unit will need to be replaced. They cost about £70 each.