In this article, we take a look at fencing and hedging kit that makes life easier for operators.

Stock farmer and keen fencer David Devine couldn’t justify shelling out for an all-singing, all-dancing post knocker, so he built his own instead.

His creation has all the features of a well-specced commercial machine, including 600mm of fore and aft adjustment and 900mm of side shift. This has been achieved by fitting Redrock telehandler wear pads for the frame to slide along. 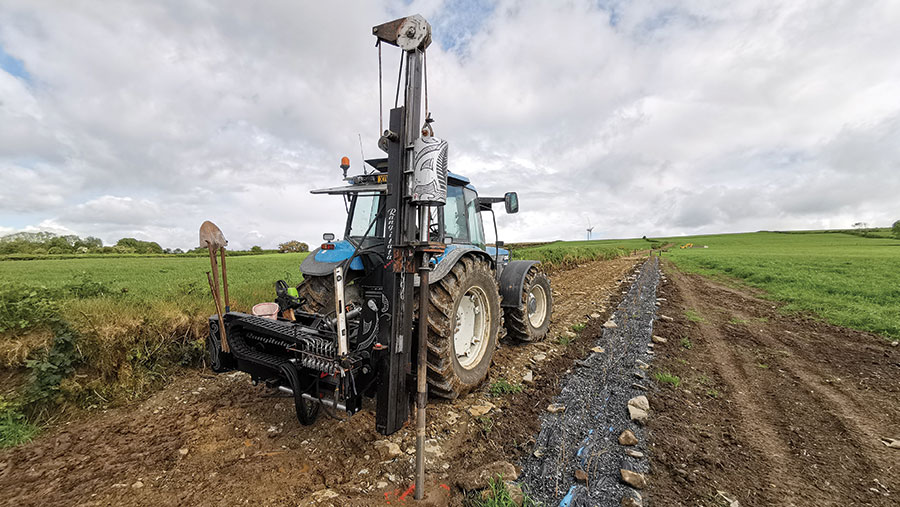 The mast is also telescopic and extends using an elevator side-shift ram from a Reekie destoner. This was ideal for the job, as it has a small diameter, but offers a decent amount of extension. The mast also has four-way tilt adjustment.

Cleverly, he’s also employed a 3:1 pulley system, which triples the speed at which he can cycle his 225kg weight.

Because Mr Devine’s farm in County Londonderry, Northern Ireland, is so stony, he has also made a 65mm rock spike, complete with extractor ram. This was fashioned out of a shaft from a Flemming roller.

As for the hydraulics, he salvaged an eight-slice Sauer Danfos from a commercial vehicle breaker and plumbed it into a Power Beyond port that he installed on his New Holland 8340.

This means it will only pump oil on demand and he doesn’t have to have a spool on constant pumping.

The base machine took about a year to put together and the rock spike was added more recently. All in, it cost about £3,000, with the hydraulic rams being the biggest outlay.

Elis Davies designed and built this easy fencer for the front of the farm’s Honda quad bike as part of a final year project at school. The nifty rack carries two reels of wire, up to 20 poles and a pair of pliers for repairing any damaged areas. 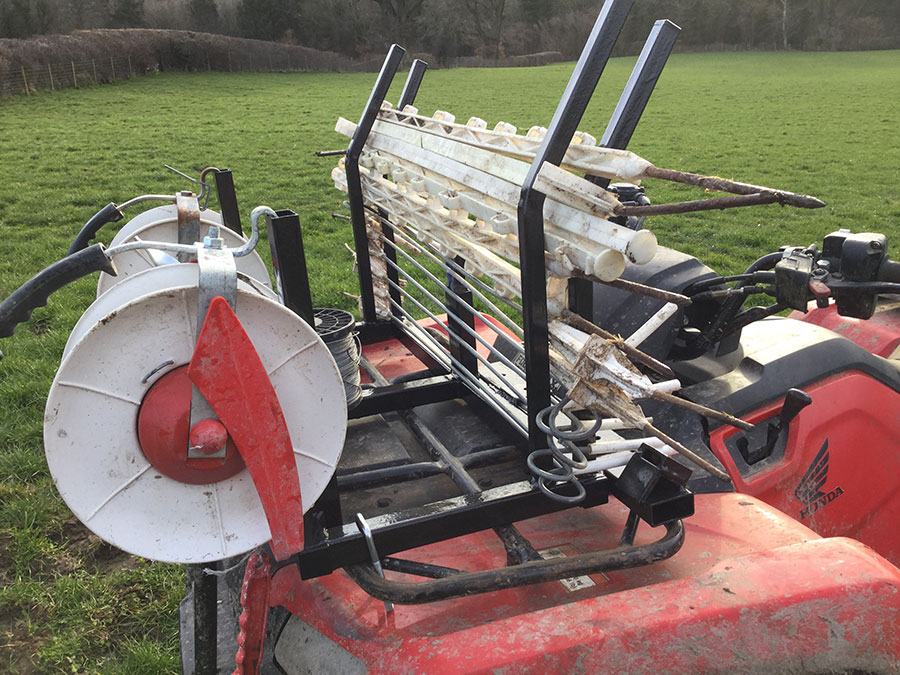 He has also fitted an extending arm from an offcut of box section to hold a reel, making it easy to drive while unrolling, with no need to come off the quad.

It’s used twice a day when moving his spring-calving herd around from early February to the end of November.

Father-and-son team Bryan and Daniel Price have built a simple trailer to alleviate the back-breaking work of unrolling heavy wire rolls by hand.

The trailer is towed behind the farm’s Suzuki ATV and is made from defunct cow cubicles. The chassis is an old quad bike trailer and the wheels have come from a friend’s Vauxhall Astra. 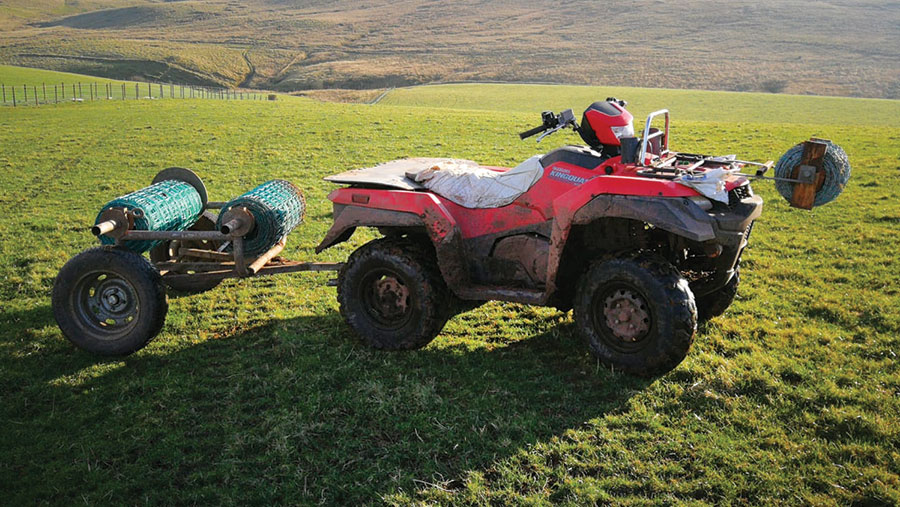 Even the bolts that hold the netting in place are from old telegraph pole brackets.

The build took about 10 hours and only cost amounted to a few welding rods. The trailer can hold two 100m rolls of netting.

Carmarthen dairy farm Rhodri Thomas has built a neat wire unroller and tensioner to complement the post knocker he entered into this competition a few years ago.

Having grown tired of unrolling small rolls of netting by hand and making large numbers of joints, he decided to make a machine that could unwind large rolls and tension the wire at the same time. 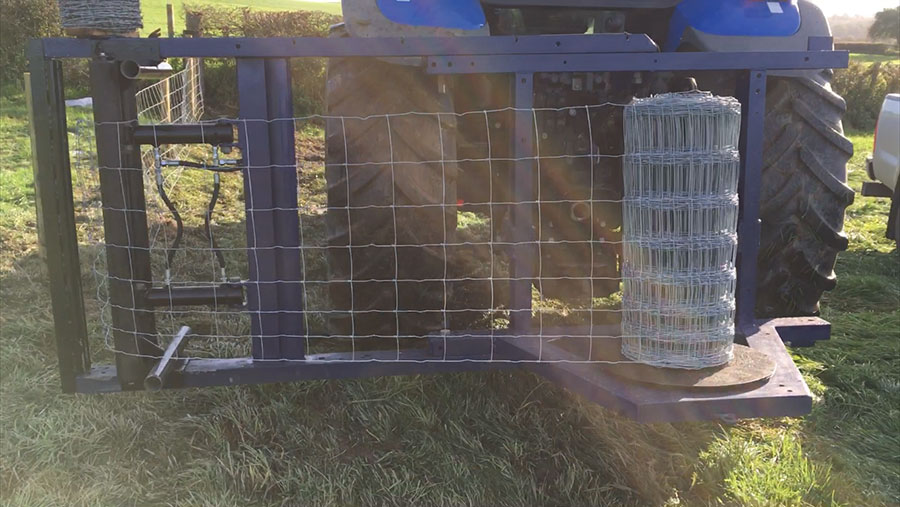 His tool hooks to the tractor’s three-point linkage and has a holder that can accommodate wire rolls of up to 500m.

The wire is rolled out through a clamp that is made up of a length of round bar with a pair of hydraulic rams attached, and these push against two other rounds bars, securely gripping the wire.

This clamp can be used on the left or right of the tractor and the tension can be applied by driving the tractor forwards or backwards. He placed a roller near the clamp so the wire rolls easily and doesn’t get snagged.

It’s also able to tension the wire without passing the strainer post and it has a separate reel on the top for winding out barbed wire.

Mr Thomas built the machine using second-hand steel and a pair of rams off an old muck grab, so the only outlay was for the hydraulic pipes and fittings.

Falkirk farmer Andrew Reid built a fencing machine from scrap metal that can fit to a three-point linkage or front-end loader.

Inspiration was taken from various machines he had seen online, but he adapted the ideas to suit the materials that were available on the 80ha stock farm.

The unit can unroll net and barbed wire and, once at a strainer post, there is a hydraulic slider that clasps the wire to allow the tractor to edge forward and tension.

When on the loader, the fencing rig can be tilted 90deg to make sliding rolls of wire into position a simpler task. It can hold two rolls of stock netting, along with top and barbed wire.

Mr Reid’s only cost was the £55 spent on a euro bracket to fit his Deutz tractor – the rest of the materials were from old machines such as a Ritchie flat-eight bale carrier. 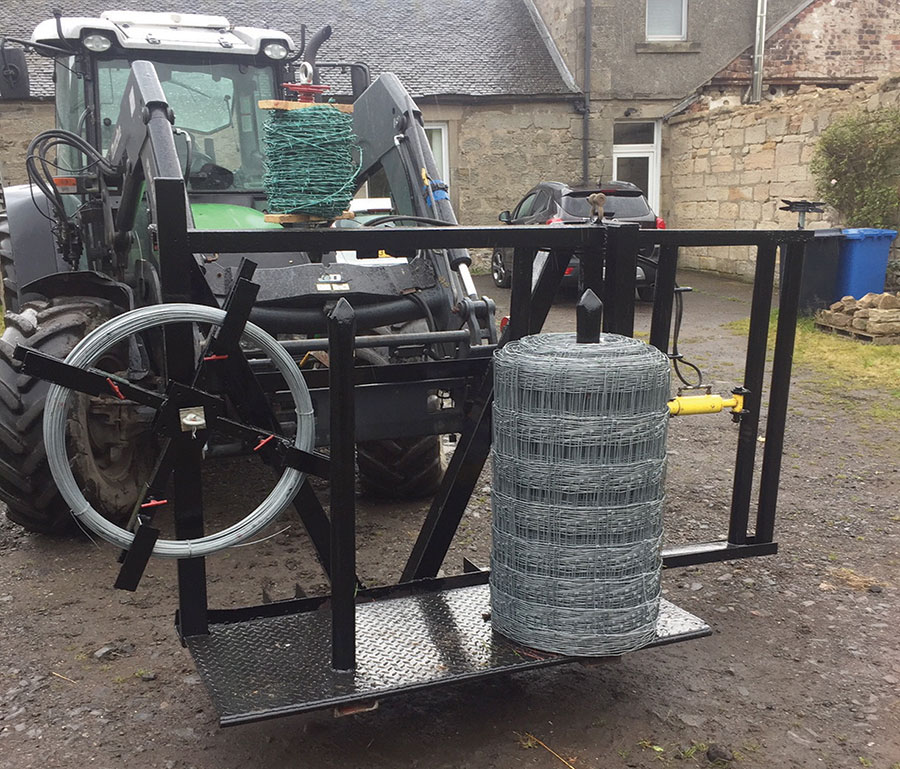 Anyone who has tried to take down and roll up barbed wire fencing before will know the perils involved.

When Charles Bowerman had more than 2km of the stuff to take down for the National Hedge-Laying Championships, he built a nifty wire roller to spool the wire up quickly and safely.

It runs from the spool valve on the tractor and is mounted to the front-linkage cargo box. A simple lever operates the wire roller mechanism, with a walking device to evenly place the wire on the roll.

He used 30cm lengths of silage bale wrap inner tube for the wire to spool onto and the clever unit can also be used to roll up electric wire. 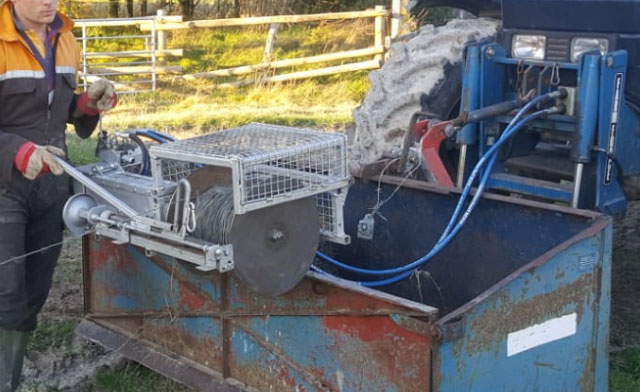