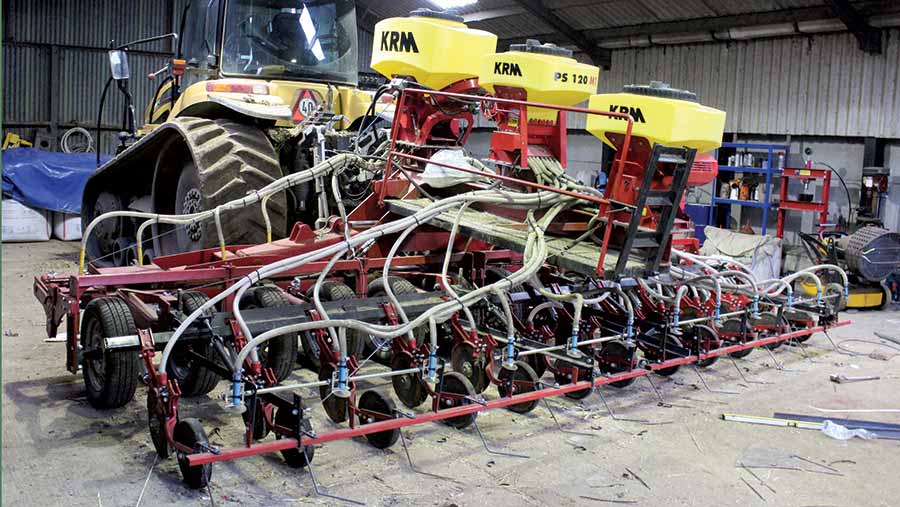 Rod Cowlin has managed to slice the farm’s establishment costs and time in half by switching to a strip-till drill, but the best bit of all is that he built it himself.

He started sketching out his plans for a home-brewed planter long before most of the major manufacturers had begun bigging-up the benefits of strip tillage, and it’s now completed a full year on Trucketts Hall Farm in Suffolk.

The strip-till system is well in vogue as growers look to trim their costs and discourage blackgrass seeds from germinating by minimising cultivations between the crop rows.

For Mr Cowlin, the speed of the drilling job has also helped overcome the challenges of working across a large acreage with a relatively small workforce.

The previous system of cultivating with the Solo and then running through with the press ate precious time, but the new one-pass system allows him to balance drilling and combine-driving duties much more comfortably.

It is easy to get carried away when starting a build project from scratch and the cost of new steel quickly adds up. The combination of front A-frame and folding wings is a particularly expensive assortment of metalwork and rams, so Mr Cowlin sought a cheaper alternative.

It turned-up in the form of a neighbouring farm’s old 6m Lely CultiTerra, which he nabbed for just £1,500.

A single 65mm ram provides the muscle to haul the 3m drill wings into their transport position and the thick plate steel was tough enough to form the base for the rest of the structure. It was also a far cheaper option than manufacturing the arrangement from fresh with brand new metal.

Mr Cowlin then welded a 2.5m-long RSJ to the recycled A-frame. It cost £100 and was to provide a slimline central spine that would leave space for the wings to fold within the width of the tractor.

Chequer plate forms a load deck for access to the three sideways-mounted hoppers but keeps things narrow enough to swing the wings up into transport mode well inside the width of the tractor.

A couple of gussets either side between the joist and the frame provide extra welded support, and lengths of box section run to the back end to make sure everything stays together.

They slice a slot 200mm deep – shallower than the average subsoiler leg – and Mr Cowlin has allowed the wings to wear out to reduce the amount of upwards heave caused as the foot tears through the ground.

A gas pipe runs down to the heel of each leg and drops fertiliser into the rooting zone ahead of the seed. Using a cheap and easy-to-source material means if there are any problems then Mr Cowlin can get a replacement sorted quickly.

DAP is applied at a rate of about 20kg/ha to fuel the plants over the autumn and has reduced the need to make another pass later in the season to apply the fertiliser.

The wheel assemblies were the most laborious job. The rims and tyres were £160 each from Horsch, but every hub had to be drilled and threaded with pinpoint accuracy before being fitted to the shaft.

The hard graft was worth it, according to Mr Cowlin, because a single wheel can be whipped off to sort a puncture in no time, rather than the faff associated with sorting a flatty on the old Horsch CO8. While three wheels might have to be removed to get to the fourth on the Horsch, four grub screws hold each wheel to its shaft on the new drill so in-field fixes are no problem.

Four bearings are mounted on each wing – eight in total – and there’s a hole-and-pin arrangement to tweak their position, which adjusts the working depth of the rig. The wheels are also fitted with magnetic sensors to meter the fertiliser, slug pellets and seed.

Double disc coulters were sourced from Weaving Machinery and mounted directly to a length of 60mm box section without any rubber flexors.

Many designers choose to go with a staggered disc arrangement to help slice through any clods, but Mr Cowlin reckons the sandwiched disc set-up works just as effectively. Seed is dropped into the shallow 25mm gully formed by the discs, before it is covered and pressed by the following rubber wheel. 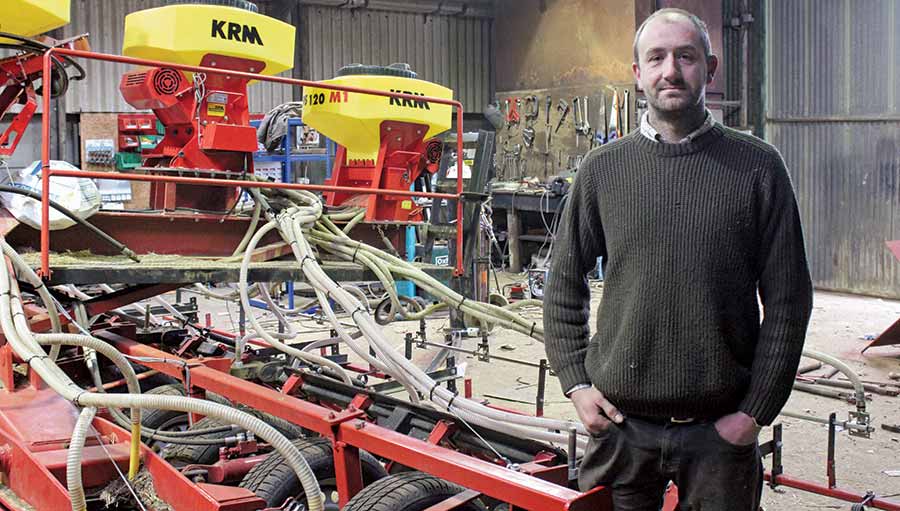 Rod Cowlin with his strip-till drill.

But the clever bit is the range of adjustment to get downward pressure and running angle spot-on.

The depth of the coulter assembly is adjusted by a vertical-pointing nut and bolt – wind it downwards and the discs go deeper, or upwards for shallower planting depths.

There are also rams on each wing that alter the working angle of the disc coulter. Tweaking them forwards or back affects how much pressure is put on the spring and spacers slotted on the ram keep things consistent. Taking a spacer out increases the pressure on the spring and the back wheel.

It means there is almost infinite adjustment and things can quickly be altered if the land lightens and less coulter pressure is required. Travelling steadily at 7kph also keeps the depth consistent and stops the coulters bouncing in and out of the ground.

A single pigtail tine tidies up and makes sure all the seed is covered behind each coulter before slug pellets are spread over the top.

Initially the pellets were applied in a straight line through a plastic tube, but a winter rejig has seen them replaced by spread plates that flick the slug killer across the width of the machine.

The farm has dabbled with Techneat and Stocks hoppers over the years, but neither Mr Cowlin nor farm owner Geert Willemsen were convinced of their accuracy.

In the end they settled on KRM units built by Austrian firm APV. The 300-litre fertiliser hopper requires hydraulic drive to cope with the higher output, while the pair of 120-litre hoppers for seed and slug pellets have an electric fan.

Each requires its own control box and a maze of cables in the cab, but the linkage-activated switches that engage the fans each time the drill is dropped into the ground simplify things.

To further reduce the risk of slug damage behind the drill, the farm has bought an old 6.6m Simba double press. Mr Cowlin plans to remove the cast rings currently mounted and fit DD press wheels every 50cm to run in line with the drilled rows.