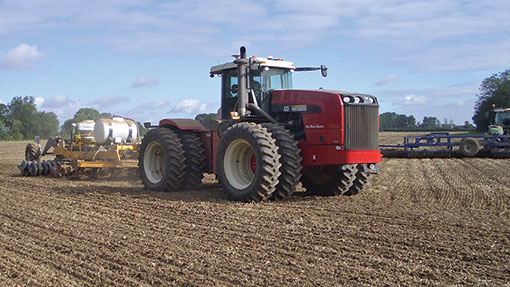 It wasn’t that long ago that oilseed rape was the afterthought of arable cropping. Uninspiring prices and limp yields meant most farmers’ establishment aims were to get it in the ground as quickly and cheaply as possible.

But now it’s the crop leading the innovation charge, with manufacturers and farmers tripping over themselves to develop new tools and techniques for boosting yields.

The latest trend is precision planting, where farmers take a standard maize drill and use it to establish oilseed rape. It’s still early days, but the theory is that spacing the plants evenly means they have more space to grow and suffer less competition for nutrients and light.

Another bonus is that lower seed rates can be used, resulting in a much more palatable bill from the seed merchant.

The downside with this method is that you don’t get the compaction-busting effects that come with the mega-popular subsoiler seeder technique. That was until Thetford farmer Chris Eglington decided to mash the two techniques together.

As a long-term proponent of the subsoiler seeding technique, Mr Eglington didn’t want to lose the opportunity to lift his soils by moving to precision planting. His answer was to create a subsoiler that would carry a precision seeder, as well as a few other goodies.

Mr Eglington used the rig to establish his entire 120ha oilseed rape crop last season and in general it worked pretty well. However, he’s reconfiguring it this season to iron out a few of the teething problems.

The original drill was put together in spring 2013 and was based on a custom-built cultivator from Lincolnshire engineering firm TWB.

This had the subsoiler at the front, the precision drill in the middle and the DD-type packer bringing up the rear. The slug pelleter and liquid nitrogen applicator sat on the top of the frame and shared a GPS sensor for variable-rate spreading.

Its first outing was on a patch of bare ground, where Mr Eglington experimented with different seed sizes. The drill is designed to work with seed that has a thousand-grain weight of 4-6g and he quickly found that any larger seeds would crack and smaller ones would drop down in pairs.

“I prefer bigger seeds as they make better plants, so decided to opt for seed that was between 5.5 and 6g,” he says.

Once the initial teething problems were ironed out, Mr Eglington set the drill to work. The farm’s Versatile 435 – one of only two imported to the UK – provided the pulling muscle and it was able to cover about 25ha in a day.

He settled on a seed rate of 21 seeds/sq m, which meant plants were spaced about 8cm apart. This gave a good plant stand with each getting plenty of space to grow.

The result was impressive and the drill successfully placed the seed at the required spacing.

But running it in the rougher-than-ideal ground behind the subsoiler caused the drill to occasionally jump and misplace some of the seeds.

This meant there were a few gaps up the field, particularly in the centre of each run where the unconsolidated soil was deepest.

For the 2014-15 season Mr Eglington is planning a major overhaul, putting the drill at the back of the rig so it runs in smoother ground.

TWB is building a new chassis that will allow the DD-type rings to sit just behind the subsoiler. There will also be a short third row of DD rings between the main ones and the subsoiler to try to level out the tilth.

The transport wheels will sit behind the rings and the drill will be mounted on the back of the rig on a three-point linkage.

The hope is that the drill will be running in a smooth, consolidated seed-bed, which will produce much more accurate results.

It will also be 2-3m shorter, making it much easier to guide through gateways.

It’s difficult to put a price on the project, as the development still isn’t quite complete, he says. However, the drill cost £18,000 and a similar off-the-shelf TWB trailed subsoiler costs about £40,000.