The arrangement is designed to add a dollop of sophistication to old-school leaf spring set-ups that can often be a contributing factor in grain or grass trailers toppling over. 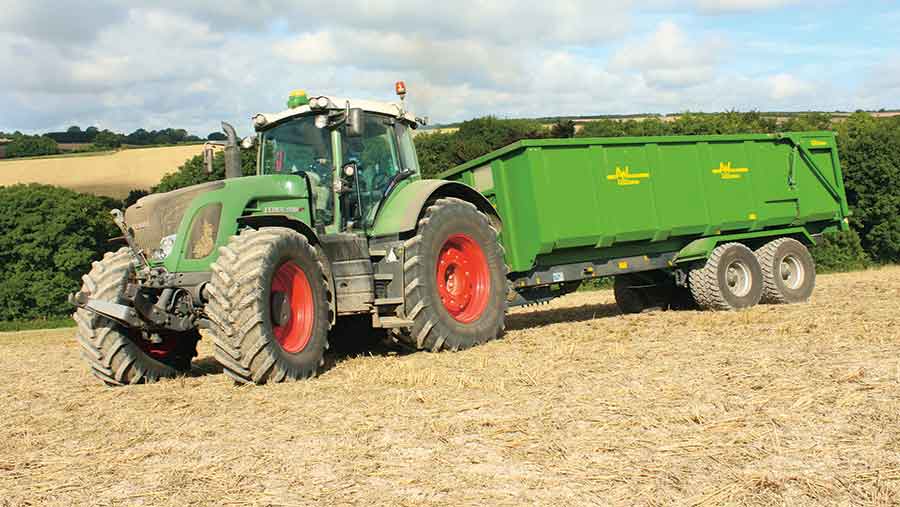 A pre-production version of the system has been trialled by John Martin, from Milbourne St Andrew, Dorset, whose brace of high-capacity AW Trailers simply weren’t up to the challenges presented by the steep chalk-topped slopes that ribbon across his 320ha arable-only farm.

Mr Martin’s system priorities high soil organic matter and minimum tillage, which sees his John Deere Hillmaster combine run at 90deg to the tramlines to improve the spread of chopped straw. However, it also presents challenges when it comes to unloading the grain.

Though he upgraded his old 12t haulers for top-spec 16t and 18t AW trailers in 2008 – complete with air brakes and fat 600/60 R22.5 Michelin tyres – they still struggled to cope with the farm’s steeper ground.

“Five years ago we rolled a fully-loaded 18-tonner and that was the final nudge I needed to make some improvements to trailer stability,” says Mr Martin, who won the Farm Sprayer Operator of the Year title in 2015.

The biggest problem was his choice of chunky flotations over slimmer super-single rubber.

“Low ground pressure is an important part of our system and the grain trailers are the worst offenders – they cause much more damage than the tractors or sprayer – so big flotations were the only choice.

However, the downside of that the wide tyres is that the springs must be mounted closer to the chassis centre, which affects the overall balance of the trailer.”

Though the lack of stability was obvious, a solution was less forthcoming.

Expensive and complicated gyroscope systems are available on the continent, but justifying such a fancy piece of kit on a grain trailer will no doubt be a stumbling block for most UK farmers.

Instead, Mr Martin went on the hunt for a lower-cost alternative, first looking at adding an extra leaf spring to the standard suspension.

On the plus side, it would stiffen-up the bounce of the trailer particularly when fully loaded, but also meant the springs would have more power to flip the rig over on the steeper ground.

It worked out as a pretty expensive option, too – four leaf spring upgrades were priced-up at £300 a piece, even before they had been fitted.

The second option was to add bump stops to limit the up and down movement of the body.

However, reducing the downward travel of the trailer would also stop the load sensing part of the air-activated anchors working properly and, with the trailer fairly full, shortened suspension travel would see 18t of crop crashing down on the bump stops all too frequently.

To understand the physics of the problem, they pulled a fully-loaded trailer across a bank and monitored axle travel to work out how the centre of gravity shifted as the gradient began to increase.

Surprisingly, they found that the uphill spring was the troublemaker. “The axle height was the same on both sides with the trailer empty, but when it was full the centre of gravity rose,” says Mr Martin.

“It meant that once the downhill spring had compressed to its maximum and the gradient continued to rise, the uphill springs kept trying to open, forcing the load upwards and encouraging the body to flip.”

What was the answer?

To try and limit body roll, Mr Bower came up with an alternative to an adjustable hydraulic torsion beam that would keep the axles and chassis parallel with one another. 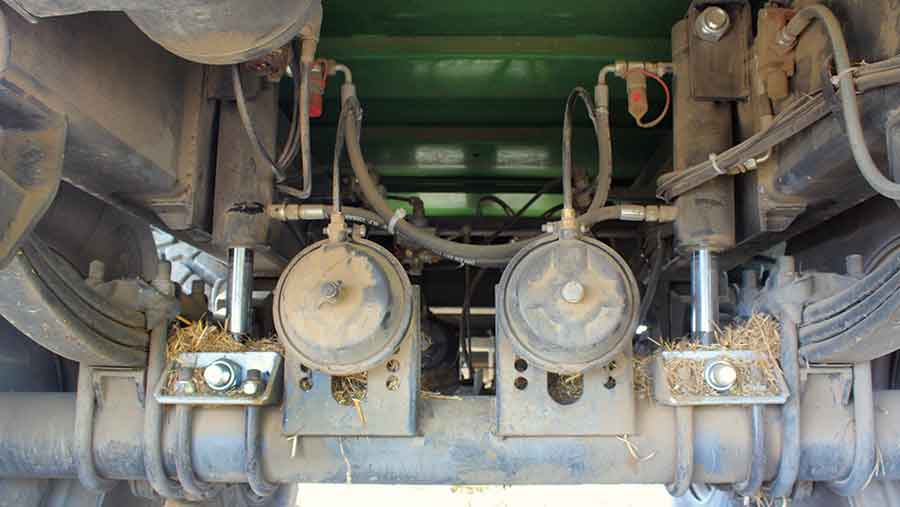 It’s Based on a simple, self-contained two-cylinder hydraulic circuit for each axle, which is able to limit the variation in leaf spring flex so that one side of the trailer cannot drop or rise any more than the other – if one spring goes up, then the other one does, too.

To build the system, he set about modifying a hydraulic ram to form a compression section in part of the stroke – run-of-the-mill rams simply won’t work.  The idea is that the oil pressure on the downhill side of the trailer tries to compress the spring on the uphill side.

His ram reconfiguration allows the cylinders to be able to drift out of parallel when at low pressure (about 3bar), but variation is restricted between the two as the pressure rises to its 16bar maximum.

It means that as the trailer is loaded with grain it still has the vertical flex of the two springs, but it also increases the oil pressure to restrict the side-to-side rocking motion that can cause so many problems across steep banks.

Not completely – the system isn’t a fail-safe way of preventing rolled over trailers, but it should keep the axle angle within 1deg of the chassis, so both sides of the trailer sink and rise equally.

The system was field tested this harvest and Mr Martin managed to negotiate slopes of up to 15deg without any trouble.

“We wanted the system to be student proof and maintenance free, and that’s what we’ve got.

“The other advantage is during tipping – as the weight is shifted to the back of the trailer the suspension stiffens up and improves stability as the centre of gravity rises.

Mr Bower plans to start the kits for trailers and tankers at about £600/axle. With a good-spec 18t trailer now drifting depressingly close to the £30,000 mark, it’s a fairly cheap upgrade, says Mr Bower.

The fitting process should be pretty pain-free, too – provided you’re handy with a welder. Chunky U-bolts wrap around the axle and clamp to the base of the ram, while the top brackets are glued to the main chassis with a run of weld.

With the main metalwork in place, the system must be hydraulically charged with a full load to make sure it’s tuned to cope with the sort of weight the trailer will be carrying on a regular basis.