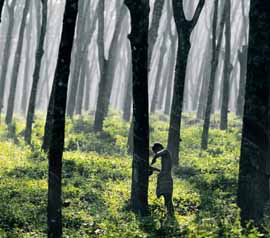 Farmers are being warned to prepare for higher tyre costs and to order early due to high raw material prices and a rapidly increasing demand from machinery manufacturers.

The tyre industry is being faced with two issues, according to managing director of Trelleborg, John Westwood. “The original equipment demand has rocketed and it’s way ahead of what was predicted. Added to this is the fact that the price of rubber rose by 94% between January 2010 and January 2011. Nearly 42% of this rise was between November 2010 and January 2011.”

Part of the problem was a poor natural rubber harvest, although perhaps more influential was a sharp increase in manufacturing both in Europe and worldwide and in particular in China.

Trelleborg was the first tyre manufacturer to buy a factory producing radial tractor tyres in China.

“There are two reasons for this: to create extra capacity; and to provide manufacturers based in China with tyres, so they don’t have to pay large import duties imposed by bringing them in from Europe.”

Because tractor and construction tyres contain a higher proportion of natural rubber than automotive tyres, the drop in natural rubber stocks is having a more profound effect, he adds.

“There’s a fine line in supplying enough tyres for equipment manufacturers and enough for the replacement market. But Trelleborg has upped production to ensure there’s enough for farmers ordering for the coming season.

“We generally buy raw materials three months ahead, meaning that even if commodity prices fell sharply, which is unlikely, farmers wouldn’t see that for several months.”

“Manufacturers can’t swallow all the raw material costs, and prices will have to go up,” he adds. Trelleborgs went up by 6% in January and will rise by another 6% on 1 April.

Overall tyre demand in the UK is, in fact, 15% down year-on-year due to farmers buying fewer, but larger, tractors, however worldwide orders have shot up for larger tyres, according to Barry Coleman, product manager for Firestone.

“One equipment manufacturer has upped its orders by 100%, and although our replacement tyre stocks are ring fenced, there are rumours that manufacturers are trying to source tyres from replacement stocks to fulfil orders.

“Currently, delivery time on tyre orders is nearly six weeks. Our factory is running close to full capacity already and in January we made agriculture a strategic objective given the growing worldwide market.” Firestone will be increasing prices by 5.6% come 1 April, but is keen to point out that not all costs are being passed on to the customer.

Tyre supply is finely balanced across all industry sectors, according to Michelin UK’s agricultural director, Rob Beddis. “But the agricultural situation has been exacerbated by massive increases in demand from machinery manufacturers, reduced rubber stocks and oil price rises.”

Michelin has increased its agricultural production capacity for 2011, but there will be a natural lag until additional stocks reach dealers, he adds.

“Our advice to farmers is to inspect all machinery now and, wherever possible, order tyres in advance to protect against the likelihood of further price increases. If the tyres you require are not available, dealers will have time to put them on back order so they can supply as soon as Michelin’s increased production feeds through into UK stocks.”