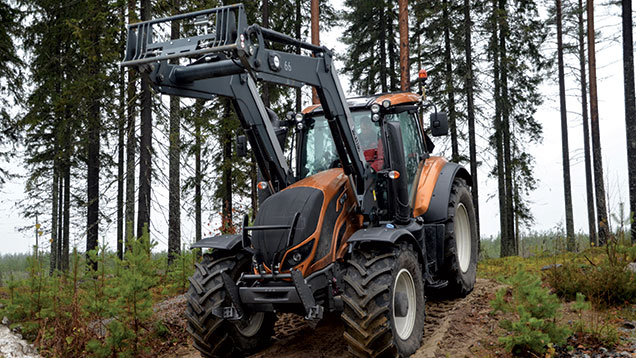 Valtra’s fourth generation T-series tractors have been more than seven years in the making. Nick Fone talked to one of the farmers who had the job of trying out the prototype models.

Grass harvesting and slurry handling on the family dairy farm form the backbone of the workload for Ville Kari’s six-strong tractor fleet. But beyond that there’s a whole raft of other contract work to be done, as well as land reclamation from forestry, which sees the farm claw back 10ha of productive ground every year.

How do you get to be a prototype tester? Mr Kari says he fell into it accidentally 11 years ago.

“Our old tractor had a pretty major mechanical failure and we were suddenly desperate. Valtra came to the rescue and offered us a pre-production T-series for evaluation.

“It was good to be asked to do the same thing again for the T4 project – I’m really interested in the engineering but it’s quite a bit of work to make notes about every little detail every day.”

The farm is in a particularly remote area, making it ideal for keeping prototypes away from prying eyes.

“We keep the tractor dirty so it doesn’t attract attention and only take it to customers who we know won’t notice the difference.

The Valtra T234 with CVT box first arrived at the farm in April 2013 and spent three months in action before going back to the factory for a two-month interrogation. During that time a T154 took its place, clocking 500 hours before the original tractor returned in August last year.

By October it had run up more than 1,500 hours pulling the farm’s 17t Strautmann forage wagon, tugging a 14,500-litre slurry tanker, pulling a five-furrow Kverneland plough and powering a deep-working mulcher-rotovator.

“The extra length and stability of the T4 is noticeable on the forage-wagon which rocks the drawbar up and down,” says Villi.

“It certainly doesn’t lack power – even working at 20-25cm the five-furrow plough is no test for it although the stump-mulcher keeps it limited to 10hr/ha.”

During the testing phase, faults were few and far between. However, when the original, over-engineered front-axle mounting was swapped for a more conventional set-up, one critical component failed under strain once in the field.

“Chains limiting front-axle oscillation broke free from their castings allowing the beam to pivot beyond its intended arc of travel. This put stress on the 4wd prop-shaft, leading to failure of the universal joints.

“The R&D guys quickly got to work in assessing the weakness and sorted it out.”

“There’s lots more room than the old cab and being able to slide the rear steering wheel right out of the way is brilliant.

“The passenger seat is great and visibility is good with fewer, narrower posts but the small, difficult-to-navigate armrest monitor from the last T-series is still there.

“The new armrest itself is OK but personally I preferred the old CVT slider to the new joystick. Overall, though, it’s a massive step up from the old tractor.”