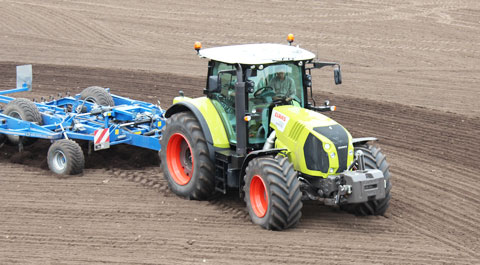 The old Arion was a pretty good tractor so the fact the new one shares many of the same internals is no bad thing. The five-pillar cab is a big improvement, offering excellent visibility, and we like the new styling.

Launched in 2007, the first-generation Arion replaced the Renault-inspired Ares and came with either a four- or six-cylinder Deere powerplant. It’s been a popular tractor – Claas has managed to shift more than 10,000 units – but the firm hopes its latest attempt will steal even more market share.

Under the skin, it’s not really that much, apart from the new Deere engines with exhaust gas recirculation to keep the emissions police happy. Four-cylinder Arion 500 models get a 4.5-litre block and power starts at 145hp, while the 6.8-litre six-pots start at 158hp.

However, in the looks department, the new Arion is clearly quite different. The new five-pillar cabin is probably the most striking improvement. This has been shifted forward on the chassis, giving the tractor a much chunkier appearance.

Aggressive is probably the most apt adjective to describe the new bonnet styling. The angular grille has a much bigger mesh area to stop the EGR engine from getting hot around the collar and there are a series of shark-like louvres on the side of the one-piece hood. All this makes it much meaner-looking than the old one.

The most exciting development – from a driver’s point of view at least – has to be the new cab. Similar to the unit fitted to the Axion 900, it has acres of glass and has been modified to offer much better visibility than the current one.

As soon as you hop on the seat you can see and feel the difference. Gone are the chunky cross members in the front window, replaced by a wide singe pane and the dash has been slimmed down to further improve the view.

By opting for a five-pillar – instead of the increasingly popular four-pillar design – Claas is able to have a smaller door on the left side and a side-opening window to let some fresh air in.

At the back, the B-pillars have been shifted forwards to make room for a big, curved bay window (net curtains not included). This is particularly handy as you can easily see wide implements without having to lean back too far in the seat. There is a one-piece glass door on the right side, too.

By moving the whole cab forward slightly, Claas has managed to fit in a bigger passenger seat that houses a sizable chiller for your tuck box. There are plenty of other cubby holes, too, including a handy removable box above the left wheel arch.

Claas has clearly listened to its operators as the new machine has a large metal toolbox tucked away behind the right-hand step. There is also an option to have a second one on the other side.

Top-of-the-range Cebis tractors inherit the firm’s Cmotion controller, which will be familiar to those who have driven one of the latest Lexions or Axion 900s.

For those in the dark, it’s a slightly odd take on the standard joystick controller, that looks and feels a bit like a mini rugby ball mounted on its side. Strange as it sounds, it is very comfortable, easy to use and your hand moves to it quite naturally.

As an added bonus, the screen is now integrated into the seat-mounted armrest, which means you don’t have to keep glancing to the right to see what’s going on. A bank of electric spools is also neatly positioned under your fingertips.

Of the current Arion crop, Claas says nearly half the largest machines are sold in Cebis spec with a 50kph box. But unsurprisingly, most of the smaller four-cylinders come in the more basic CIS format.

Shifting in CIS models is handled by a stubby drive stick, which is mounted at the front of the armrest. It’s not as comfortable to use as the Cmotion controller, but is more than adequate, particularly if you spend most of your time in auto.

Moving the pto switches on to the armrest in both models will also be popular with operators.

Those who cringe at the thought of kitting up for Adblue will be glad to hear the Arion still sports a Deere powerplant. This has exhaust gas recirculation and a diesel particulate filter to meet Stage 3b regs.

Claas says it decided to stick with the Deere unit partly because it plugs nicely into the Gima box and partly because they felt owners of this size of tractor wouldn’t want the hassle of AdBlue.

Both the four and six-cylinder blocks are almost identical to those used in Deere’s 6R tractors and during the limited amount of time we had to test them they pulled well. Even the little 550 was responsive and gutsy while hauling 21t behind it.

Because it’s a Stage 3b block, it has a larger cooling pack to cope with the higher operating temperatures. This swings out on gas struts for easy cleaning and has a longer-lasting filter.

There’s been little change in the transmission department. But that’s not a bad thing, as the old one was very good.

As with the current tractor, there is a four-range box with six powershift stages that can be driven in manual or fully-automatic, Hexactiv mode.

In auto mode, which most people are likely to drive it in, there are two settings: road and work.

Selecting road allows the system to shift smoothly through all 24 gears and the range changes are almost as slick as the powershift stages, even when under load. In field mode, the box will only shift between the six powershift stages to prevent interruptions in tractive power. The driver can then shift range manually.

On Cebis machines, manual shifting is controlled via the Cmotion hand grip, while the more basic CIS machines use a stubby drive stick. Both are two-stage controllers that up the powershift stages with the first push and pop to the next range with the second.

Hauling a trailer with 21t on board, albeit on fairly flat ground, both the four and six-cylinder models coped with ease.

At the test site we were able to get the tractors up to full tilt on a series of bumpy, forest roads and ride was pretty comfortable, even for the person sitting in the passenger seat. Whether the extra cab suspension travel makes a discernable difference is hard to tell as the old 640 we drove was equally good.

For loader work, the 540 CIS we drove was pretty impressive. The single-pane windscreen and large glass roof panel gave a good view of the loader and the adjustable forward-reverse shuttle was useful for adjusting the severity of direction changes.

For draft work, the CEBIS armrest comes into its own. Because the rear linkage controls and headland management switches are incorporated into the Cmotion controller, you barely have to move your hand to use them. Things are a bit more spread out on the CIS machine and the manual spools are a tad unwieldy.