James Andrews and Oliver Mark run the rule over the biggest machine ever to be on the company books – the French-made M7171.

Kubota’s bread and butter has always been in diggers, lawn mowers and basic, low-powered tractors, so the company’s aim to climb to the top of the tractor-building tree would seem wishful at best.

However, it made its agricultural intentions clear back in early 2012, when it outbid Case New Holland to land the implement-making giant Kverneland.

The company then cooled off talk of another acquisition by building a huge factory in Dunkirk, France, and launched a new range of 130-170hp tractors – the biggest and most sophisticated tractors ever to wear a Kubota badge. 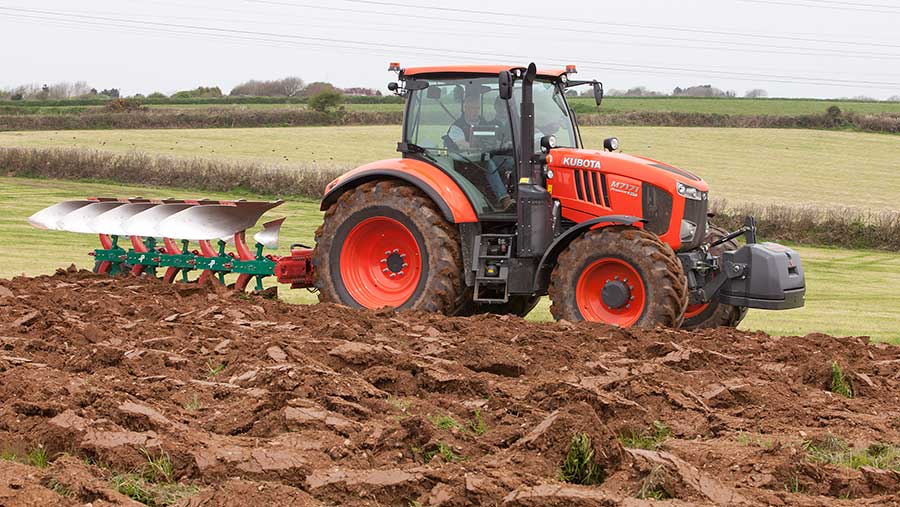 All of the world’s M7-badged machines will be bolted together at the new European base, and the bulk of them will be destined for Kubota’s key markets – Germany, France and the UK.

We tried out the top dog in that range – the M171 – to see whether it’s a realistic challenger to the old guard.

The fad in recent years has been towards building small, manoeuvrable four-cylinder tractors that can compete with six-bores for power.

Kubota has followed that trend, with its 170hp M7 ranking as one of the most powerful four-potters on the market. However, unlike the Massey Ferguson 6616 that uses a 4.9-litre block, the Kubota is propelled by a much larger displacement 6.1-litre unit.

In Kubota’s eyes, the long stroke means the engine is less stressed than the Agco oil-burner and has many of the characteristics of an inline-six without the extra cost, and a decent power-to-weight ratio to boot.

All that sounds like good news, particularly for those that demand the versatility of a lighter tractor for baling, haulage and top work.

However, for pure tillage tasks it needs to be loaded up with weights to get the traction and pulling power of a traditional six-cylinder. Though manufacturers might disagree, the fact that New Holland’s T7.200 is one of the most popular tractors in the power bracket suggests farmers have voted with their wallets.

For its first foray into the world of stepless transmissions, Kubota has taken the somewhat obvious choice of putting its faith in German maker ZF.

The Terramatic box – also used by the likes of McCormick and Deutz-Fahr – is available on every model in the M7 range and has two “speed ranges”, which basically translate as road and field modes.

However, unlike some other stepless transmissions that perform a physical range change when you press the button, doing so in the KVT just tweaks the box’s programming.

In field mode this means it’s slower to rattle through the ratios and has its top speed limited to 20kph. Meanwhile, road mode tries to get it up to its 50kph top speed as briskly as possible. 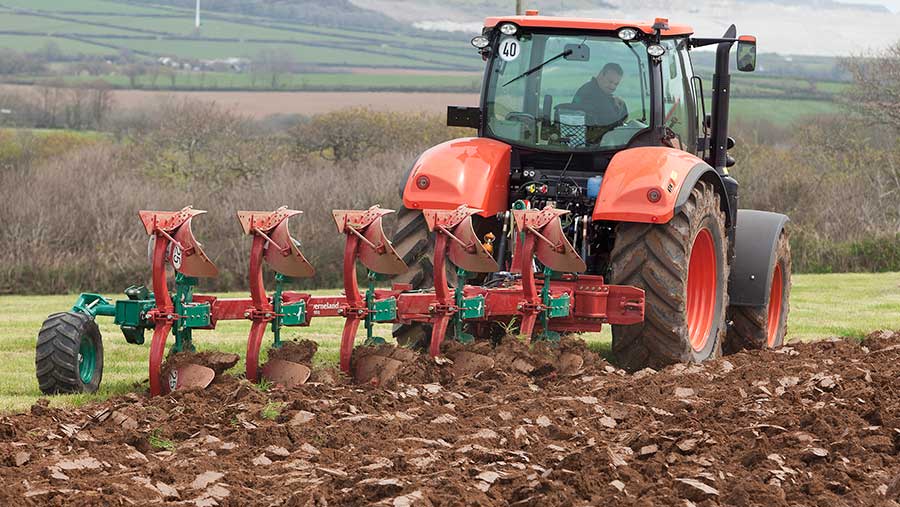 Kubota says the main benefit of this system over a true two-speeder is that the driver won’t cook the transmission if it is accidentally left to do a day’s heavy draft work while in road mode.

In the cab, controls are nice and straightforward. It can be driven on the pedal or joystick, nudging the stick forward to select a temporary cruise speed. There are another couple of field cruises tucked away on the headland management screen, too.

On paper this all sounds pretty good, but when we tried it out in the field with a five-furrow Kverneland plough in tow we found the transmission was too eager to clamber up the gearing.

This meant it spent a lot of its time shifting up and down hunting for the right ratios – and pumping out a dreary engine note at the same time – even when it was set to prioritise power over economy.

No doubt a tweak of the software would help sort this, but we ended up working around the problem by either engaging the cruise control or driving it in manual mode on the hand throttle.

The simpler powershift transmission is also built by ZF and in standard set-up has six ranges with four powershift splits in each. Powershift steps and range changes are all performed by nudging the joystick backwards or forwards and once it runs out of powershifts it will automatically perform a slightly clunky range change.

The new tractors make use of the same cab found on the existing MGX series. It’s well designed, with pencil-thin pillars and loads of glass providing top-drawer visibility all around.

However, it’s quite modestly sized for a tractor of 170hp and the trim has a pretty low-grade feel. In the base-spec model it doesn’t look out of place and is perfectly suited to livestock farms where cab cleanliness is never the number-one priority, but at the top of the power bracket it has got serious competition with tractors offering interiors of far greater quality. 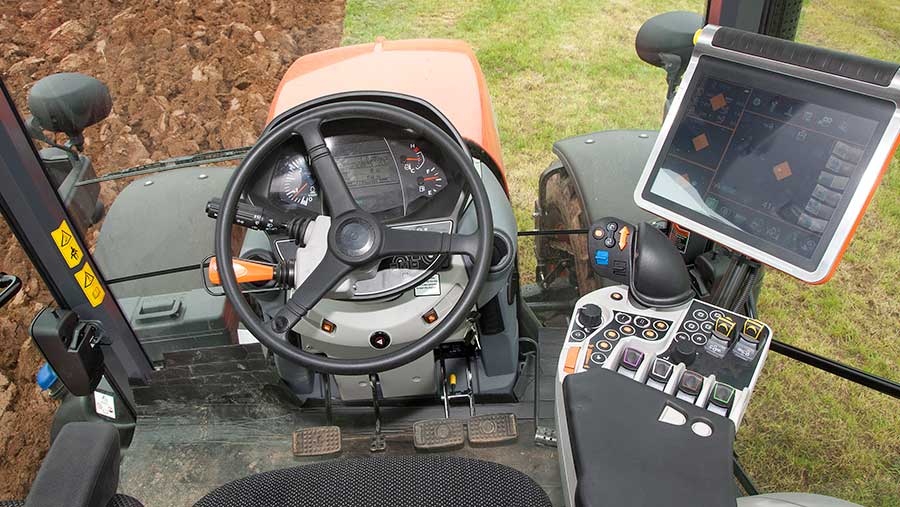 Ergonomics are also a mixed bag. The big screen sourced from Kverneland is one of the fruits of Kubota’s tie-up with the Norwegian company and is a doddle to use – whether it’s for simple spool settings, or for more complicated headland management sequences.

Less impressive is the layout of cab controls. Ergonomics are not a strong point here – a lot of the controls feel the same, which means you have to look at the armrest before prodding any of the buttons. The depth dial is also a bit vague, and lacks a clear stop point which will no doubt bug plough men across the country.

Not as little as you might think. The list price is £113,000, which puts it right up there – and even above – a lot of the established names.

Obviously you will be able to shave a fair chunk off that. And, with Kubota targeting 3,000 sales of the M7 this year, the company is going to be more keen than most to get the machines shifted from the forecourts.

Naturally, Kubota’s growing tractor range has caused a few slightly awkward situations among dealers, too, though the company says its sales network for the larger tractors is beginning to take shape.

The prospect of a five-year, 3,000-hour warranty – and the option of extending it for an extra few quid – should soothe any concerns about reliability.

In top-spec premium guise, the M7 is a generously equipped tractor with kit levels to genuinely rival Fendt and probably surpass John Deere. The easy-to-use KV-sourced screen is big, clear and has to rank as one of the best on the market.

However, it just can’t shake the livestock tractor feel, and the thin plastics and budget finish will do little to convince potential buyers to make the switch from the established brands.

At first glance the price also looks like a potential stumbling block, but with Kubota keen to get its name established in the market, shrewd punters could probably shave a hefty chunk off the steep-looking starting price.

Three models make up the M7 series, and they all use the same 6.1-litre Kubota-made motor.

The smallest of those overlaps closely with the existing M135GX. It is more basic and has a lighter-duty build compared with the M7131, but is also tighter turning, uses the same engine and costs £5,000 less.

As well as the trio of horsepower options, there are also two spec levels to choose from – standard and premium.

Tractors fitted with the stepless gearbox always get the posher premium spec. Those with the “standard” badge go without a screen, have fewer spools and are available only as a 40kph powershift as standard.

The simpler specs also make do with 80-litre/minute hydraulics, which might be deemed too small for buyers after an out-and-out loader tractor.