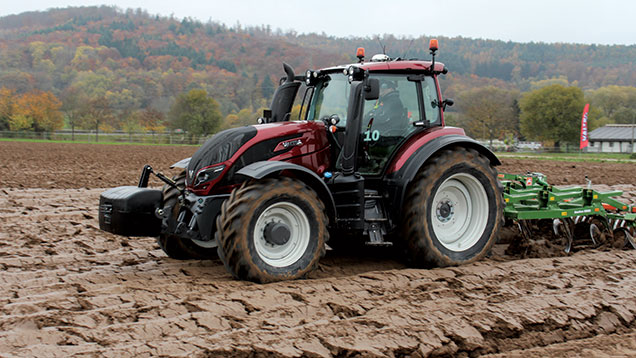 Valtra’s six-cylinder, T-series tractors have been crying out for a refresh for years… and at last they’ve got it. James Andrews travelled to Germany to see if it’s been worth the wait.

While its Agco cousins have been busy hogging the headlines, Valtra has been beavering away building a replacement for its long-in-the-tooth T-series tractor.

The fourth generation of the Finnish six-cylinder is more powerful than before, better looking and smoother on the road. But the big news is the new five-pillar cabin.

Gone is the old steel-hungry framework, to be replaced with a bubble-like five-pillar construction. This gives the driver more space than before and the one-piece screen and right window give decent views around the tractor.

The seating position seems a lot higher, too. That’s a good thing, as perching at the helm of the old T-series you felt like you were lurking in the bowels of the tractor. Loader users will be happier too as there’s a slimmer roof with a good-sized window in it.

Passengers also get a decent place to sit. The old fold-down shelf has been replaced with a cushioned seat so it’s now as good as anything else on the market.

On the controls front there have been a few improvements. Buttons are now in more logical positions, are easier to find and there aren’t loads of blank spaces dotted around all over the place. The thumb-like gear shifter is also nicer to use.

But the armrest is pretty much the same as before. That means there’s still a small dial-operated screen that’s a tad archaic compared with the competition and a bit tedious to navigate.

Storage-wise there’s a proper fridge to keep your sarnies fresh and – thanks to the option of Twintrac reverse drive – plenty of flat space behind the seat.

Lurking under the new snout is a six-cylinder Agco-branded Sisu engine. Smaller models from 155hp get a 6.6-litre version and the big ‘uns get a larger displacement 7.4-litre. This will boost to 250hp in the range-topping T234 while kicking out 1,000Nm of torque.

As before it uses AdBlue to clear up exhaust smuts, but Valtra says it hasn’t had to add many other bits and pieces to satisfy the latest rules. The SCR catalyst in the exhaust is massive, but surprisingly you don’t really notice it from the seat.

Other than a few software upgrades the transmissions themselves haven’t changed that much. There’s still a five-step powershift that will be fitted in the Active and Versu models, and there’s still a four-range CVT in Direct-badged tractors.

The controls have changed quite a bit, though. All models now have a thumb-like stick to control shifting. In powershift tractors it’s used to notch up and down the powershift steps, perform range changes and engage the auto-shifting modes. Meanwhile, in the CVT it’s used to adjust forward speed, change range and switch between stick and pedal mode. The controls look so similar you have to look carefully to work out which one you’re sitting in.

Forward and reverse shuttle is a familiar operation, though. Valtra has stuck with the same lever on the left of the steering column, which is one of the best in the business. They’ve added an extra feature, too. Flicking the lever into park and back to drive now engages a hill-hold mode. This keeps the electric handbrake engaged so the tractor stays put on steep slopes. All the driver needs to do to move off is stand on the throttle.

To cope with the oil flow required by some implements like big bale wrappers, Valtra has uprated the hydraulic system added the option of a 160-litre/min pump. Load-sensing has been fitted too. This revs the engine automatically to get heavy implements or loaders moving more quickly. But the best bit is that the spool block is no longer split either side of the top link. That should put an end to hopping over drawbars and implements to get pipes in.

Lift capacity has also gone up with the rear links man enough to haul 9.5t off the deck and the front rated to 5.1t.

The Finns have been busy with the chassis, too. While the old T-series had a sizable chunk of bonnet hanging over the front wheels, the new one has a wheel on each corner. Valtra says this gives better weight distribution and improves the ride. The downside is that buyers might have to fork out for a bigger weight block.

Another benefit of the new design is that it has tightened up the turning circle. By shifting the cooling pack up, Valtra has made space for some wheel-shaped indents in the chassis that allow for considerably tighter turns.

The new T-series is already in production and Valtra is taking orders now. It’s likely to be spring 2015 before they start rocking up on farm, though. Another HiTech model is due to be launched in summer 2015 and the four-cylinder N-series machines will be getting a similar overhaul soon.

For those wanting to catch a glimpse of the new models they will be making an appearance at the Lamma show in January 2015.