Pokier batteries and high-tech motors mean many cordless power tools now promise performance to match their plug-in rivals. They’re not cheap, but are they worth it? To sort the good from the bad, we tested five grinders from some of the biggest players in the market.

Balance: Long and heavy, which provides perfect leverage on cutting jobs but makes it clumsy when working at awkward angles.

How we tested them

Our tests are designed to simulate real farm tasks, so the results often differ from manufacturer stats gained in factory-perfect conditions.

Motor: Makita and Hitachi were brushless, the others were not

Weight: Including the battery, but no disc

Length: From the battery base to the edge of the motor housing

Measured spinning speed: With no load

Max cutting length: Distance cut through 6mm steel plate before the battery tired or the grinder cut out

Charge time: From the point at which the tool cut out, to max charge

Price: Best price we could find on the web – list prices are a lot dearer.

Trigger: Single-finger switch that must be squeezed to maintain drive. A guard prevents accidental activation, and there’s also a safety lock for good measure.

Battery: 18V, 4Ah. One of the smaller batteries, but it took an eternity to charge. The three-stage life indicator is useful, but the tool cut out quite early on without warning and took a long time to cool down before it would run again.

Notes: Feels torquey and strong, and whipped through the 6mm plate in no time, but it also had a tendency to overheat quite quickly. The tool-free collar makes adjustments a doddle.

VERDICT: 7/10 – Plenty of power but battery charge time was a real problem. 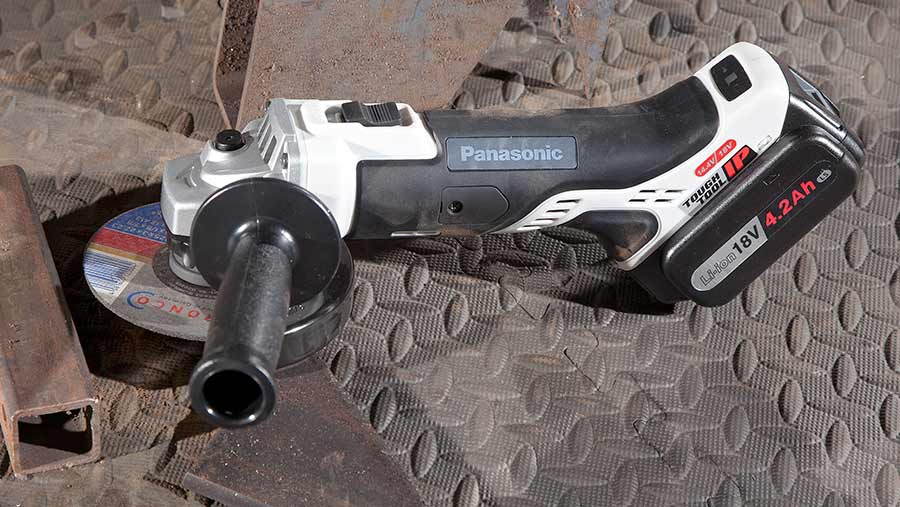 Balance: Near-perfect, helped by the unusual angle of the battery. It means it can’t be stood on its end, but that never happens anyway.

Trigger: Rocker-style start-up means it stays on hands-free, but the switch itself is flimsy, flicks off randomly and can be awkward to engage with gloves on.

Measured spinning speed: Broke down before we finished testing.

Battery: 18V, 4.2Ah (upgraded to 5Ah versions for the same price in July). It comes with a low battery warning light and overheat protection cuts off power to the motor before battery temperature reaches a harmful level.

Notes: Grippy rubber finish and good balance makes it one of the most comfortable to operate. However, a screwdriver is required to adjust the guard. It also cuts out more frequently than the rest and there didn’t seem to be any overload protection, so we ended up frying the motor. 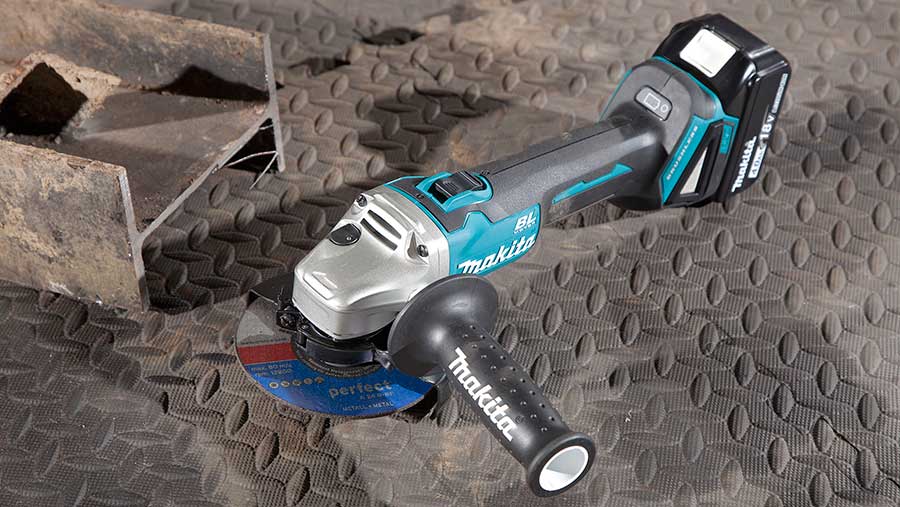 Balance: Similar lanky build to the Dewalt. The handgrip is positioned near the back of the tool body, which improves weight distribution.

Trigger: A more solid version of the flick switch on the Panasonic that can make things awkward when wearing gloves.

Battery: 18V, 4Ah with a four-stage battery indicator fitted to the battery and a three-stage version on the base of the tool.

Notes: Grip and balance are sound and the quick release guard is handy. It also has overload protection and automatically cuts the speed according to load, which should save the battery on menial tasks.

VERDICT: 8/10. The best of the bunch. Well built, powerful drive and a reasonable charge time, but you have to shop about to get it at a decent price. 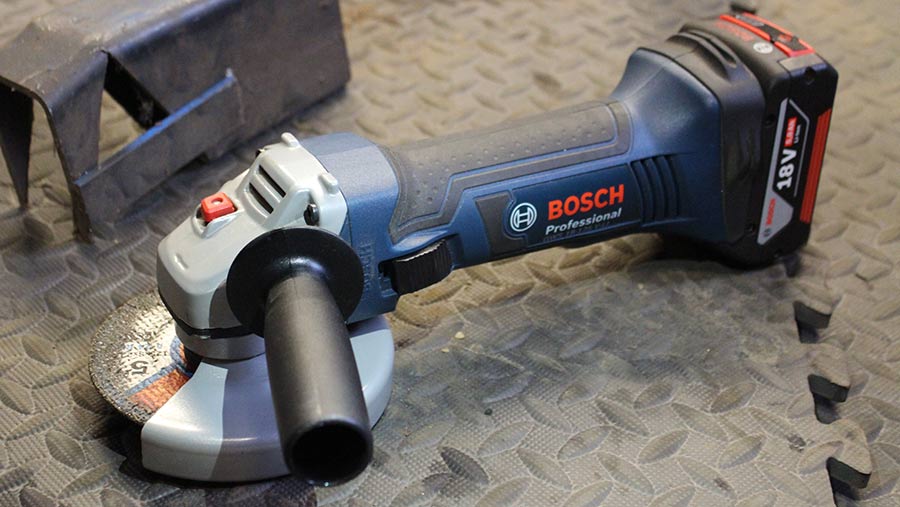 Balance: The smallest and lightest makes some big power claims. However, it’s seriously tail heavy – largely because the handgrip is at the front – and the cheap second handle leaves the operator’s wrist close to the spinning disc.

Trigger: A simple flick switch activated by the thumb would be better placed on the top of the tool.

Battery: 18V, 5Ah with a three-stage life indicator. The battery is physically small given its claimed capacity, and it was the quickest to charge, too. Battery and motor overload protection should save expensive breakdowns.

Notes: Small body, high-capacity battery and a rapid charge sounds like the recipe for success, but the Bosch came up short. It was pretty gutless and painfully slow on our cutting tests, and the guard needs an Allen key to be adjusted. It also feels more cheaply made than the rest.

Verdict: 4/10. Short and lightweight makes it pretty handy, but it was a snail at slicing through steel plate. 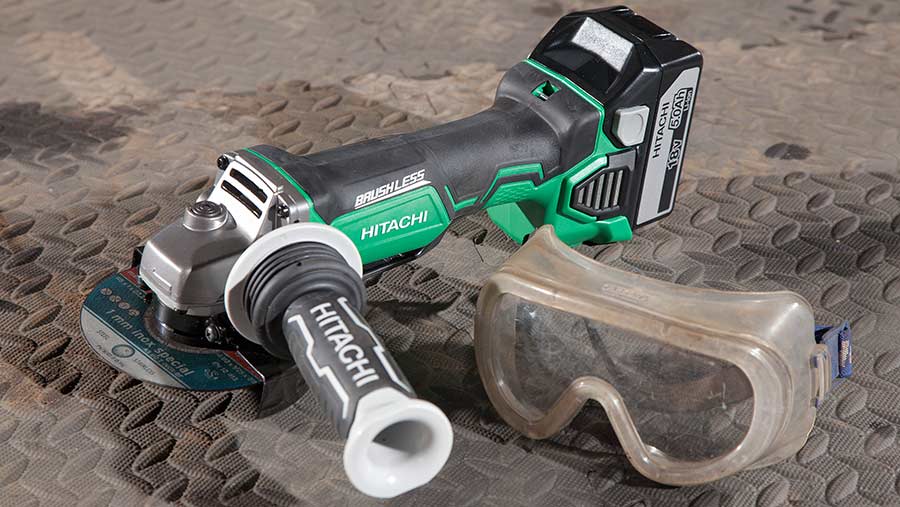 Anyone that regularly uses grinding wheels and changes the disc is required to carry out a test to ensure they are doing it properly.

It is an employer’s responsibility to make sure their staff are put through the test and the law also applies to the self-employed. The one-day course covers everything from the correct way to store your discs through to safely installing abrasive wheels on bench grinders.

For more information or to find your nearest test centre, visit www.lantra.co.uk.

Balance: The battery is a big lump, so a majority of the weight hangs in the tail.

Battery: 18V, 5Ah but the two-stage battery indicator isn’t particularly useful. Claimed charge time was 75min, yet we found it was almost double that.

Notes: The soft start function makes it feel less ballsy than the Dewalt and Makita, but disc size made little difference when it came to cutting speed and the Hitachi outdid the rest on the battery test. Quick-release guard adjustment is handy and the massive shock-absorbing handle takes vibrations out of the job.

VERDICT: 6/10. A solid all-rounder that delivered the best cutting performance per charge, but the batteries took a long time to refill.

The standout performers in most of the tests were the Makita and Dewalt, which were able to whizz through sections of 6mm plate at around the same speed as our benchmark Bosch plug-in. Interestingly, the more expensive brushless motors didn’t seem to make a whole heap of difference in terms of battery life.

Our tests were harder work than the tools might normally expect, but they showed that sustained heavy use and big cutting jobs really take their toll on the battery and frequently cause cut-outs and overheating. A couple of the batteries also took more than two hours to recharge, so it’s worth buying at least two to save time.

That said, they are just the ticket for taking in the tractor cab during cultivations season to nip off the odd stubborn nut or for lightweight grinding jobs. The only catch is the price – at close to £300, they are a bit of a luxury unless you’ve already got the batteries.

If that’s the case then you can stick with a brand and save cash by simply buying the bare bodies each time.