There has been plenty of chat in the industry of late about the benefits of long-chop maize on cow health, milk yield and quality.

The theory is the bulkier forage takes longer to travel through the rumen – without the need to add additional straw – giving the cow more time to extract nutrients from it.

Also, because straw has minimal feed value, the cow can fill up on a higher-grade feed, which supposedly increases yields and butterfat content further.

The system is already popular in the US where straw availability is less reliable and crops are drier, but its slowly starting to gather pace in the UK too.

However, it does have its critics, with some saying its bulkiness makes it hard to remove air and build a quality clamp. Other complaints are it can be less consistent than finer chops and it often costs more to produce.

For those that do want to make it, they will usually need to invest in a modified corn cracker.

This is because the thicker mat of crop coming out of the chopping cylinder is too much for most standard processors to deal with.

That means there’s a good chance maize kernels could pass through without being smashed, massively reducing the quality of the forage.

Therefore, a more aggressive unit with a higher speed differential needs to be installed. These tear at the mat of crop, opening it out and exposing the kernels to the roller surface. Some manufacturers also use different roller-tooth profiles to help smash the grain into small pieces.

Claas is probably the best known for this type of forage, with its Shredlage processor unit produced under licence from its US inventor.

But most other forager manufacturers have a system in place for making a similar product. Below we take a look at the different offerings from Claas, Krone and John Deere. 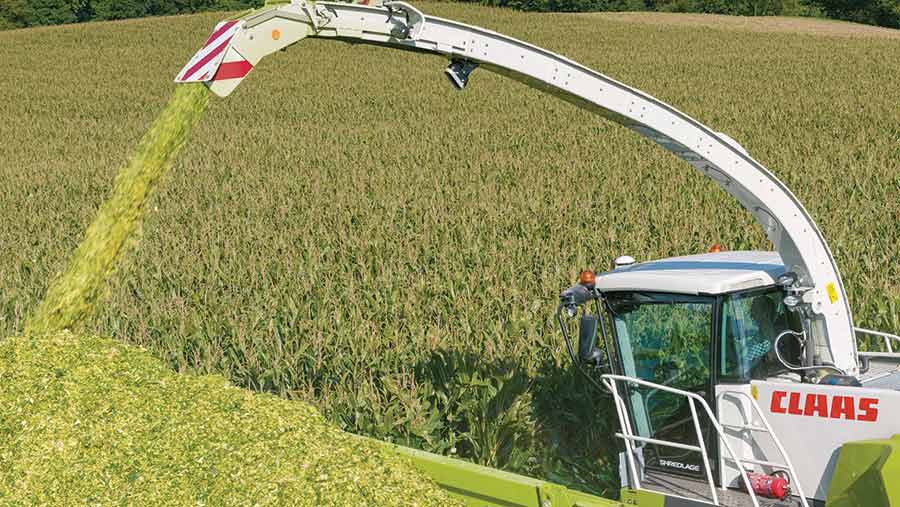 In order to produce Shredlage, Claas forager owners need to invest in a complete new corn cracker unit that costs about £15,000.

This is manufactured under licence from US firm Shredlage, which was set up by partners Ross Dale and Roger Olsen. Mr Olsen’s father Loren came up with the design for the actual tooth profile – which is why they are referred to as Loren Cut rollers – before they were manufactured by a firm called Scherer Corrugating.

It’s this Loren Cut design that makes the Claas system different to the other manufacturers. By using a saw-tooth profile with a spiral groove this rips the crop apart in a sideways movement.

According to Claas, the cob pieces are also fully broken down and the kernels are crushed to break them open completely. The stalk material is shredded longitudinally, too, and the bark is peeled off. 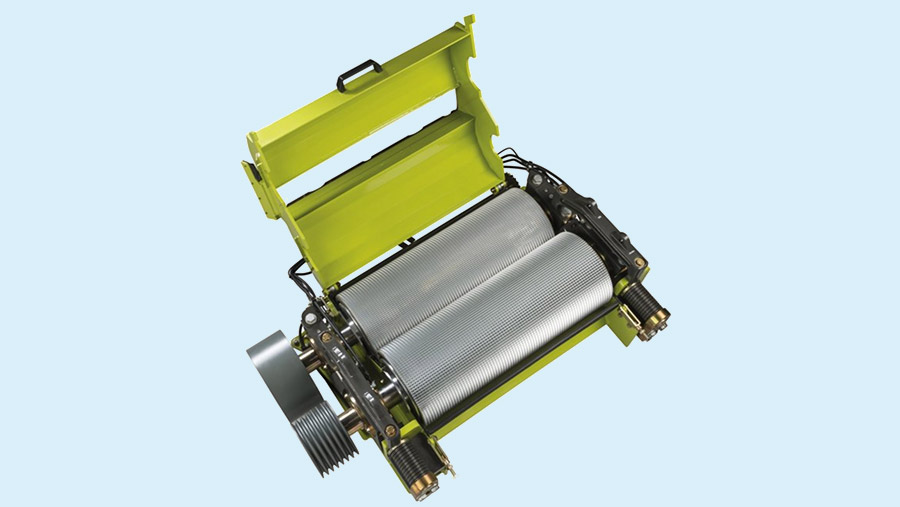 To create an extra tearing effect the 110- and 145-tooth rollers run also run at a 50% speed differential. However, despite the heavy processing the length of the material still ranges from 26-30mm.

Claas recommends producing Shredlage when the crop is between 32-36% dry matter. Crops harvested below this range can produce excess effluent and crops above 36% have to be compressed particularly carefully.

However, because of the intensity of the processing, Claas says Shredlage has a higher packing density than conventional long-chop silage. 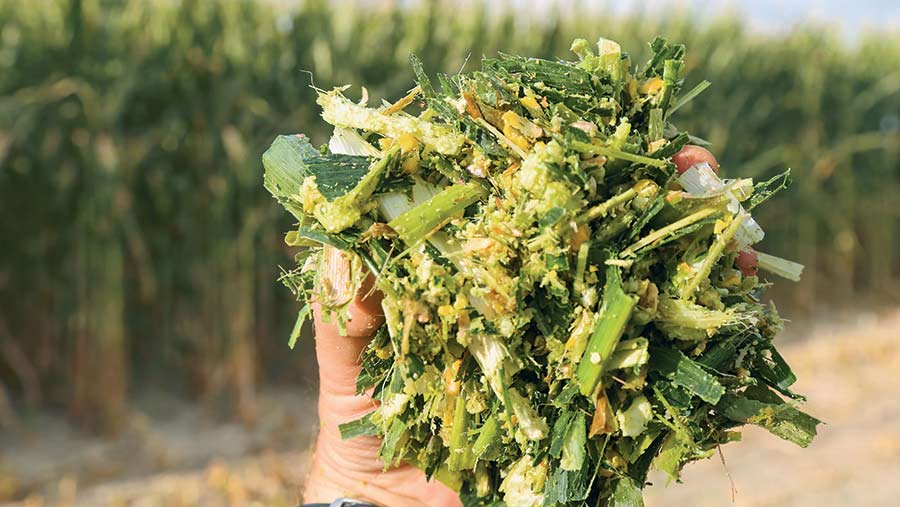 Feeding Shredlage can apparently increase milk yields by up to 2 litres a cow and reduces the need for bought-in concentrates.

Other KP’s in the Claas line-up include the MCC Classic, suitable for 3.5mm to 12mm chop lengths, and the MCC Max, which ranges from 7mm to 20mm. 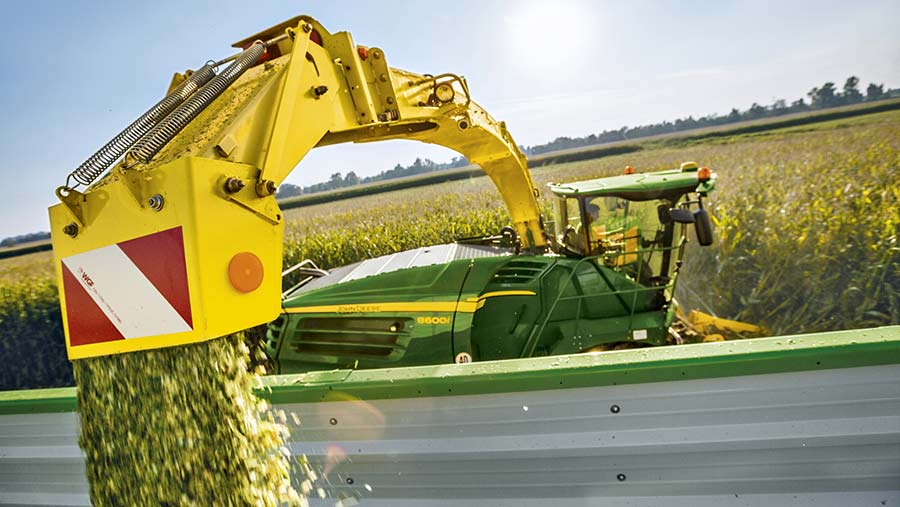 For those wanting to produce long-chop maize with a John Deere forager they’ll need to opt for a beefed-up kernel processor called the USA Heavy Duty.

As standard, this runs with a 32% speed differential, but there’s the option of increasing this to 40% or 50% by changing the pulleys on the side of the unit.

However, according to John Deere the 32% unit is adequate for most UK conditions and although the 40% is available, there isn’t one running on a UK machine yet. The 50% version is designed for ultra-dry US conditions only and would apparently turn wetter UK crops to porridge.

If customers do want to play with the speeds they can do so by purchasing the relevant set of pulleys, which cost about £250.

The rollers themselves are John Deere’s harder-wearing Dura Line versions that are designed to last four times longer than the standard units. These are 240mm in diameter and have a saw-tooth profile.

The lower saw-tooth roller is also reversed so that it gives a much more aggressive tearing action. 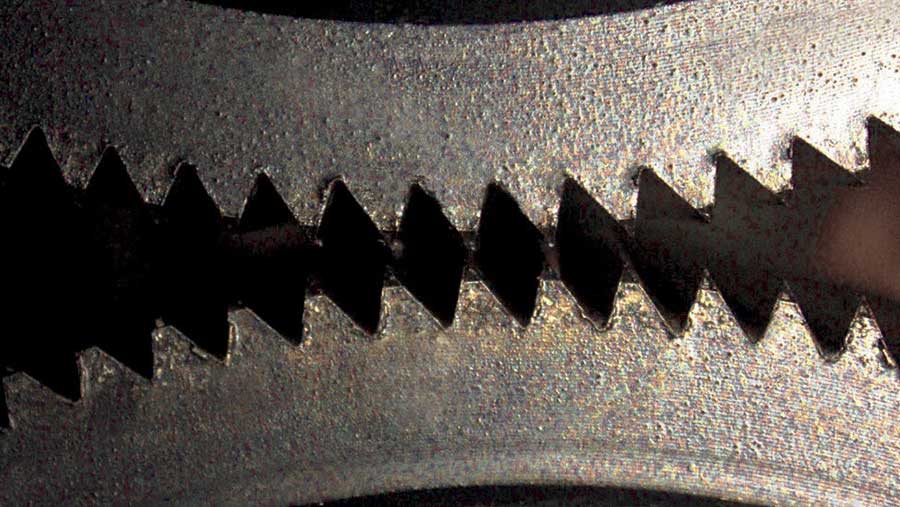 The USA Heavy Duty can apparently deal with chop lengths from 3mm to more than 30mm, meaning customers only have to purchase one unit.

No changes need to be made for short chop lengths, apart from possibly opening the gap between the rollers to avoid over processing the kernels. This can be done from the cab. 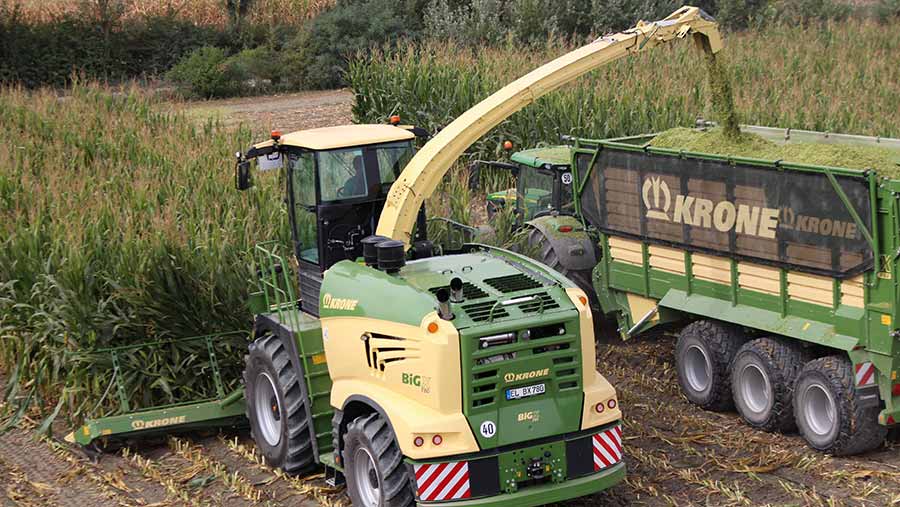 Krone offers four different corn cracker options from the 144-tooth Optimaize S up to the Optimaize XL, which is specifically designed for long-chop maize.

This involves fitting the forager with a corn cracker unit that has twin 105-tooth rollers running run at a 30% speed differential. These heavy-duty chrome plated rollers are 250mm in diameter and have a saw-tooth profile.

These will apparently smash the kernel into tiny pieces, even at chop lengths from 20mm to 30mm. The roller gap can also be adjusted from the cab according to changing conditions.

At the chopping end, Krone’s Universal 28-knife drum is best suited to producing long-chop maize with a range from 4 to 21mm with all blades fitted and 8 to 42mm with a half set installed. 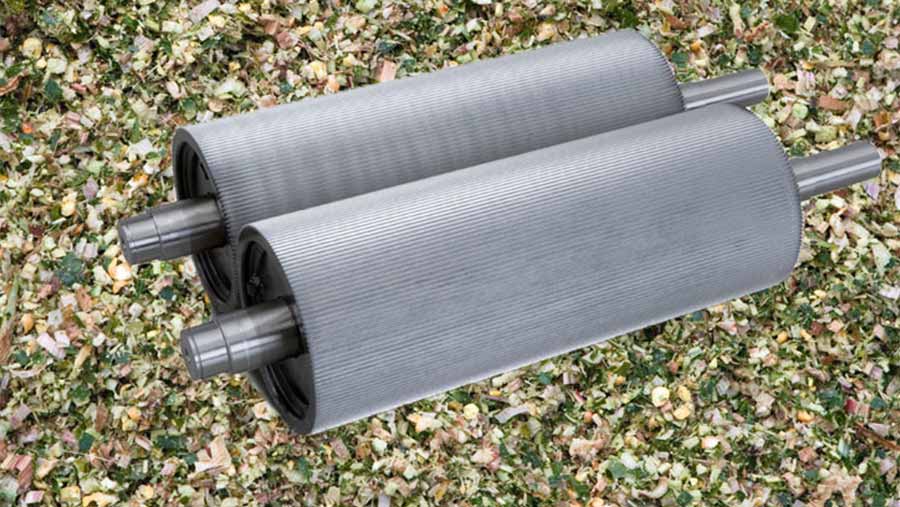 This can also be coupled with the firm’s Variloc pulley gearbox to give a wider chopping range. By altering the drum speed between 800 and 1,250rpm this apparently extends the length of cut range by up to 53%.

So far Krone hasn’t seen a large demand for long-chop maize from its customers, but it does have a demonstrator 105-tooth unit for those that do want to try it out.

As for the rest of the KPs in the range, the 144-tooth Optimaize S has a short 5mm optimum chop length for Biogas production and can be teamed with a biogas-specific 40-knife drum.

The Optimaize M, meanwhile, has an 8mm optimum chop length with the Optimaize L sitting at about 15mm.