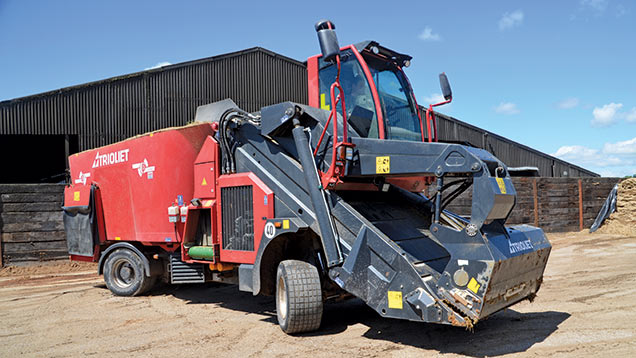 But running a large-scale unit disproportionately multiplies the hassle.

With more than 1,100 milkers plus another 700 followers to feed, the team at Y Farms in Somerset are kept busy ensuring the animals consistently have a decent diet put in front of them.

Until 2012, that duty went to an 18cu m twin vertical auger Kuhn Euromix feeder wagon pulled by a 130hp John Deere 6810 and loaded by the farm’s JCB Loadall.

By anyone’s measure that is a fair workload and it was taking a serious toll on the machinery.

Three sets of tyres a year

“With over 1,800 hungry mouths to feed at three different sites, we were hammering the kit hard.

The JCB was getting through three sets of tyres a year shunting back and forwards from the clamp face to the wagon,” explains farm manager Dominic Salter.

“The costs on the three machines involved were huge.

We decided there had to be a better way of doing things.”

Mr Salter started to seriously consider the option of a self-propelled wagon.

Y Farms looked at Kuhn’s Euromix but at the time it didn’t have the capacity to match the big herd’s requirements.

In fact, it was only the Trioliet that fitted the bill and so, after some careful calculations, the business ordered a 20cu m machine from the Dutch manufacturer.

“The self-propelled worked out about £15,000 more expensive than replacing the tractor, loader and trailed wagon but it had the potential to massively increase the efficiency of our feeding operation and cut down on the number of hours spent doing the job.

“Our first Trioliet clocked 5,500 hours before it was changed at about two-years-old and we’re now on to our second.”

The concept of running a stand-alone, self-powered mixer wagon quickly proved itself, cutting the total number of hours worked by all the machines involved by at least 50%.

However it wasn’t all roses.

Such a heavy workload inevitably takes its toll on any machine but there were some weaknesses in the Trioliet design that let it down.

“Having electrically driven fans to cool the hydraulic oil radiators mounted underneath the machine means they build up with muck and regularly burn out,” explains operator Tristan Bridges.

“On the first machine we got through three of the wide rubber elevator belts in 5,000 hours – they were supposed to do 5,000 hours each.

That said, on the new machine they are not yet showing any signs of wear, even after 3,000 hours’ work.”

The other area of weakness is in the hydraulics department.

Unusual fittings in the 4cm pipework means it is not just a case of getting a new hose made up when a leak develops. Instead, specific parts have to be ordered through Trioliet.

“Backup from our local dealer Redlynch is great but parts can take a long time to arrive – sometimes up to two weeks.”

The Trioliet is unusual in having a full-width cutting head and conveyor running underneath the machine’s cab, feeding directly into the twin-auger tub.

That makes for a simple set-up for loading – a serrated blade cuts down the face of the clamp and a single hydraulically driven beater flings it down on to the rubber elevator.

Mr Salter liked the fact this made it less likely to bridge or block up than a narrow conveyor running up alongside the cab.

Competent operators a must

However, on tall silage clamps the head will only reach about 4.5m high and the arc that it cuts through creates a significant overhang that can collapse on to the cab.

Competent operators are therefore a must.

Being able to raise the cab to look down on the feeder head adds a level of complexity but makes for easier loading.

After a year and a half with the first self-propelled mixer, the business looked again at its options and had a Kverneland SiloKing on demo before deciding to stick with a Trioliet the second time round.

“We liked certain things about the Kverneland – the way the flail head chomps through compacted maize silage and the comfortable operator’s cab.

“But we’ve got some older buildings with limited clearance and it came down to the fact that the SiloKing is 20cm too tall.”

The Trioliet also had the edge when it came to tidiness at the clamp face, because silage drops directly on to the belt rather than being hoovered up by the head.

However the SiloKing’s narrower conveyor runs faster, propelling material right to the back of the tub so there is no waiting for it to mix.

Over the past four years the self-propelled concept has definitely proved itself.

The feeding operation requires just one machine instead of three and, with a year’s work under its belt, the second Trioliet will shortly be due for changing once again.

Whether the choice is another of the same will depend on what is on offer at the time, says Mr Salter.