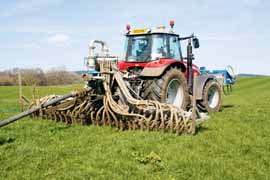 One press of a button and the electronics take over – auto-steering kicks in to keep the applicator on track, the tractor’s ECU adjusts the engine and CVT transmission to maintain the correct speed over hill and dale. Meanwhile, a flow meter, equipped with GPS mapping, records exactly how much slurry is applied and where.

For Leominster contractor Wayne Middleton, all this technology is a real plus. It means he and his father Rupert can provide customers with the most accurate and best-recorded slurry application service possible.

The automation relieves him of mundane tasks so he can keep a keen eye on the process – as well as the small TV set he keeps in the cab to relieve the monotony of crawling along at just 2.5kph.

“The Auto-Guide steering system’s brilliant, especially when laying out the pipe because it then lies in just the right place for working across the field,” he says. “It’s hard to keep your hands off the wheel at first, but a real pleasure once you’re used to it.”

It represents a significant investment, but also an essential one, reckons Rupert Middleton, to meet growing demand for carefully controlled application of what farmers increasingly recognise as a nutrient resource rather than waste material.

“If it’s managed properly and applied properly, slurry can make a big contribution to the nutrient requirements of grass and arable crops,” he points out. “As contractors, we do nothing else but empty slurry lagoons – so we set out to do it as professionally as possible.”

The process begins at the lagoon where a small sample is tested for available nitrogen content. That way, it can be utilised to the maximum while keeping within the 170kg N per hectare single-application limit for farms within Nitrate Vulnerable Zones (NVZs).

Using available nutrients to the full is especially important to farms like the organic unit where the Middletons were operating at the time of Farmers Weekly’s visit. With no mineral fertiliser allowed, grazing cattle and applying slurry accumulated over winter is the farm’s sole nutrient source.

“They really look after the slurry here,” says Rupert Middleton. “It’s a real pleasure to apply.”

By which he means the raw slurry is separated into its fibrous and liquid constituents and the lagoon’s contents kept fluid and flowable.

“It’s important to agitate separated liquor every so often because sediment dropping out of it will gradually reduce the lagoon’s storage capacity,” Mr Middleton points out. “It also needs to have the right consistency when we come to empty the lagoon because in this area we often have to pump it uphill and over long distances.”

The Shropshire organic unit is their most challenging location, with slurry from the 9.5 million litre (2.5m gallon) lagoon being applied more than 3km (1.5 miles) away from the store. Two pumps are needed to keep the material flowing through culverts beneath local roads and up to the higher conservation ground before it reaches the applicator.

Despite all the glittering technology at the sharp end of the operation, the pumps are manned throughout the process.

“In an area where radio signals can be disrupted, using remote control for the pumps is just too risky,” says Rupert Middleton. “But it’s also good insurance against a plug of straw or some other debris blocking a pipe and causing the pump to run dry as that can lead to an expensive repair bill.”

On the applicator, a flow meter located within the feed pipe measures the volume of slurry being applied, which is then recorded on an LH Agro LH5000 terminal. It also records the area covered so that the application rate in cubic metres per hectare can be calculated and displayed.

The total field area is recorded on the Topcon 150 terminal by driving around the perimeter on the first visit and collecting positioning data through a Topcon GPS receiver mounted on the roof of the tractor. This equipment also provides the interface for the Agco Auto-Guide steering system, which enables the tractor to accurately follow virtual parallel lines across the field.

“It’s quite difficult seeing where you’ve been with a trailing shoe, so some form of guidance is very helpful,” says Wayne Middleton. “We started out using a lightbar and basic GPS.

“It was very tiring constantly looking forward to the lightbar and then back to the applicator but with Auto Guide it’s no problem,” he adds. “And now we’ve upgraded to OmniStar VBS correction, the signal’s a lot more reliable and accurate.”

The Topcon unit records the date, location, work rate, distance travelled and a trace of where the tractor and applicator have travelled. Each job record can then be completed by keying the volume and application rate of slurry applied into the notes section as recorded by the LH Agro unit.

This is then copied to a USB memory stick and given to the customer so that the details can be transferred into a farm management computer program.

“Because the Topcon unit knows the size of the field and the workrate, it can display how long it will take to finish the job,” notes Wayne Middleton. “That’s really handy as the day goes on; you can easily decide whether to pack up at a decent time knowing there’s a couple of hours work to do in the morning or whether to keep going to get the job finished.”

As for the trailing shoe injector, Rupert Middleton is convinced it is the most appropriate application method for grassland and the product involved.

“Injecting beneath the surface would be ideal but it can cause too much top damage and it’s not good on stony ground,” he says. “A trailing shoe just parts the grass nicely and lays the slurry on the surface with very little contamination – we’ve seen cattle happily grazing grass within a couple of hours of application.”

Rupert and Wayne Middleton are so happy with the system – and so confident that demand for this type of service will grow – that they are preparing to make a £200,000 investment in a second outfit.

You can see a selection of slurry tankers and injection equipment at work (as well as talk to experts who can advise on NVZs) at next month’s Grassland and Muck event at Stoneleigh Park, Warwickshire on 18 and 19 May 2011. Check the website for  more details and to book tickets. 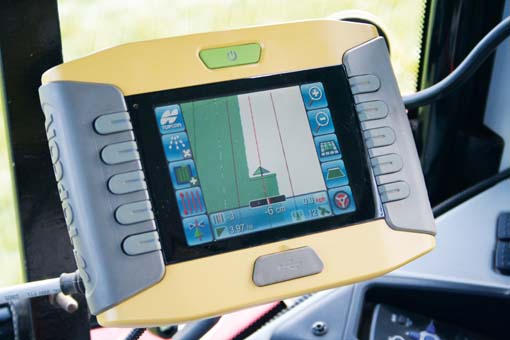 The Topcon 150 provides an interface for the Autoguide GPS steering system (left) and also records the area worked and associated data.