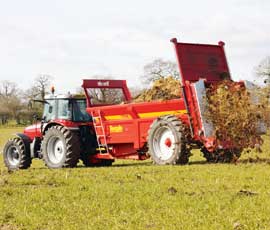 Farmers are missing out on as much as 30% of potential dry matter yield from grass as a result of neglecting some basic agronomy, according to Howard Hughes of rural consultancy HarveyHughes, which staged the event.

“Farmers regularly chain harrow their grass in the spring, although I question whether it’s the best approach to go bashing new tillers and distributing muck so the grass grows with this dried material sticking to it,” he says. “But there is a lot of potential in effective aeration and subsoiling to help keep the grass growing.”

Spiking or slitting performs a useful role by getting air to the roots and making maximum use of applied nutrients.

“But unless the tines can penetrate deep into the sward, these implements only deal with compaction about 50mm deep caused by cattle, not the pan lying deeper that’s caused by machinery,” Mr Hughes points out. “That is where subsoiling comes in.”

But manufacturers warned producers using purpose-made grassland subsoilers not to work too deep. Nick Rider of Opico advised using a spade to determine where compacted layers lie, and to then set the subsoiler no more than 50mm (2in) deeper to get maximum upward shattering effect without using more fuel than necessary.

“Winged points give extra lift but should only be needed in heavy soils or very badly compacted situations,” he adds.”

Subsoiling dry soils in July and August will produce the best shatter but grass either side of the slot will tend to burn off – though it will recover, notes Richard Hales of Sumo.

“The alternative is to go through early spring when the soil is moist and pliable,” he says. “Soil shatter won’t be so pronounced but it will still help drainage and soil structure in the long term.”

Sumo GLS is equipped to cope with stony soils – the discs have rubber suspension and the tines have hydraulic auto-reset as standard.

The “Titan” name has been revived for a pair of manure spreaders being built by Teagle Machinery at the company’s factory in Cornwall.

Teagle continues to import similar LeBouch spreaders from France in smaller and larger sizes but decided to build the popular 10-12cu m and 12-15cu m sizes in-house to incorporate some design changes.

“The top of the body has a more pronounced flare to give extra volume capacity and we’ve refined the slurry gate design to ensure it operates smoothly,” says Tom Teagle, UK sales manager. “We use the heavy duty 100t bed chain from our largest Tomahawk bale shredders, with the slats welded on for maximum strength.”

The spreaders use a vertical beater design with overlapping large diameter flights that produce a high tip speed. Reversible shredding knives are fitted and angle sections can be added to get extra throw with very light materials.