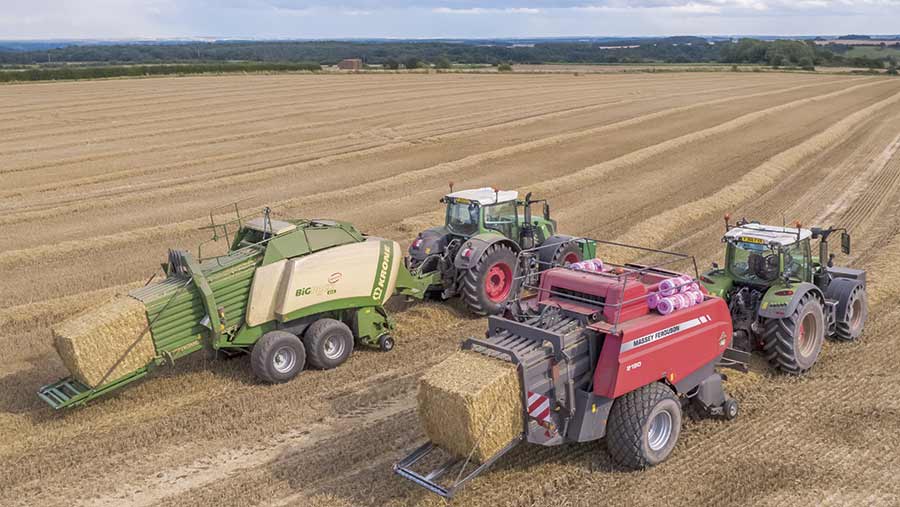 If you’re in the market for a Hesston-sized big square baler, the options are limited. Until recently you could choose from a red-liveried Massey 2290, a bright yellow New Holland BB9090 or a cream-and-green Krone BigPack 4×4.

But last month Case New Holland announced it had ended its agreement with Agco to buy six-stringers from the factory in Kansas that made the 4×4 bale so popular.

So now there are just two players at the top end of the big square game.

In the UK, Hesston-built balers (in red and yellow) have dominated the market thanks in part to the backup that has been offered by independent specialists Big Bale North and Big Bale South.

See also: How to get a big square baler ready for the new season

But with increasing sophistication creeping in to its hardware and a strengthening network of dealers, Krone has been snapping hard at the heels of the front-runners. 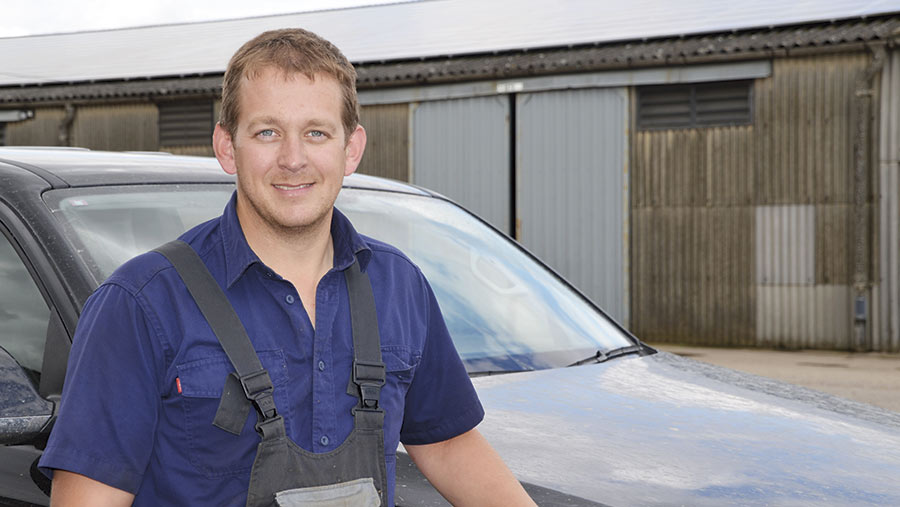 Running machines in all three different colour schemes, Henry and George Roworth have a pretty good idea of the strengths of weaknesses of each.

Working in an area that stretches 150 miles across Nottinghamshire and Lincolnshire, the brothers have built up a business over the past 15 years specialising in serving the region’s carrot and parsnip growers.

While the latter have a huge appetite for bales – Hesstons in particular – so too does the root vegetable industry, with straw spread in a thick insulating layer pre-winter at a rate of some 40 bales an acre.

That job alone stacks up to 40,000 bales spread each season through the Roworths’ four Jones and nine Larrington bale straw spreaders.

Consequently there are a lot of acres to cover at harvest to ensure the carrots are kept cosy through winter and the biomass burners are kept fed.

They gave us their view of the fleet.

For years we had stuck with Hesston-built balers – either in Massey red or New Holland yellow, depending on the deal we could get at the time.

But we’re always keen to try something new if it can bring efficiency to our operation, so in 2011 we had a Krone BigPack 4×4 on demo.

It immediately impressed us – there were no shear-bolts, just shaft drives and dog clutches, and the crop flow was so much smoother thanks to the camless pick-up, driven crop press roller and VFS feed rotor.

Those details added up to a massive difference in capacity when the conditions were less than ideal. We were able to travel 25% faster than with the MF or NH and so we did a deal. 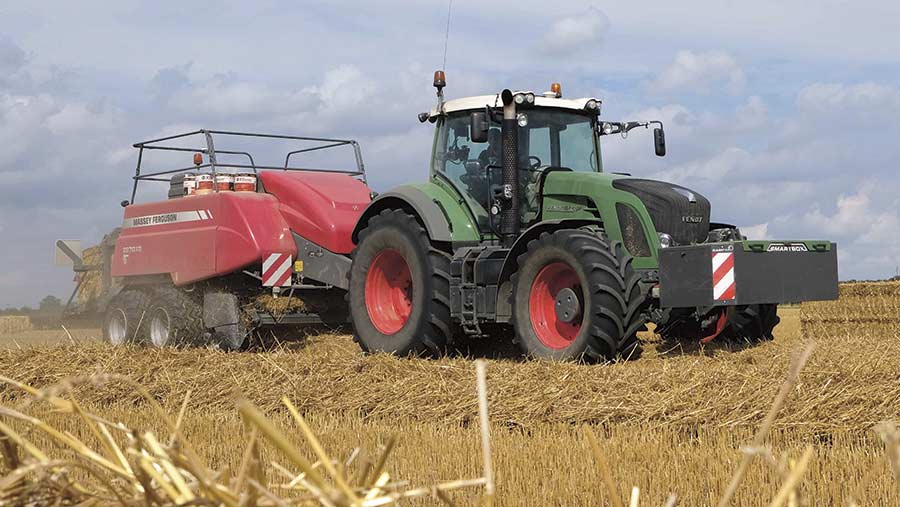 Since then another two BigPacks have joined the fleet and have similarly proved their worth. But it’s not a one-horse race and red and yellow Hesstons still feature in the line-up.

The MF and NH balers have a number of big advantages. They’re mechanically simpler, physically lighter and have a much lower power requirement, so they are much easier on fuel.

The Kansas-built machines excel when they’re running in ultra-dry crops and will match the German balers when moisture levels drop below 12%, despite being pulled by smaller tractors.

Being a European-designed machine, the BigPack really shines when moistures are higher than 15% and it easily gets to 650kg bale weights, whereas the red and yellow ones have to slow right down to get higher flake counts for heavier bale weights.

But in really dry straw you have to be careful with the Krone. Its monster flywheel generates so much inertia that it can pack it in too densely and you end up with exploding bales as they drop off the tailgate. 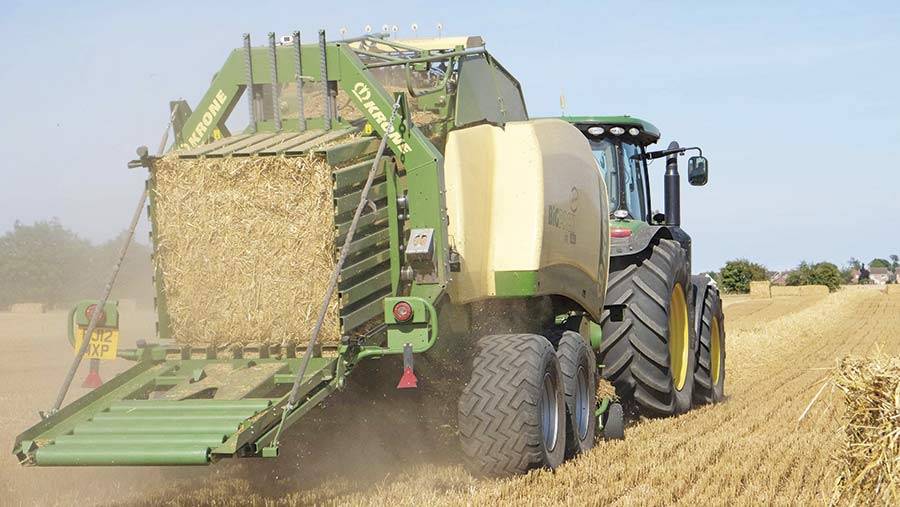 The Hesstons, meanwhile, score highly for their simplicity and consequent ease of maintenance.

The knotters tend to give less trouble, coping better with a range of string types. And the simple matter of loading string makes a big difference.

With balls laid on their side (rather than in an upright position, as on the Krone), it’s a much easier task to move part-used spools to the far end so that twine doesn’t run past the other balls and risk snagging.

The Krones have a bit of a reputation among the Roworth team as being “dirty” balers. They tend to carry more dust and chaff than the Hesstons and consequently require more frequent cleaning.

That all adds to the daily maintenance workload and means operators end up covered in dust before the working day has started.

The BigPacks have proved to be just as reliable as their red and yellow counterparts, with just a few initial snags.

We found cracks were developing in the plungers, which gave us a bit of worry. But our dealer – Grundy Agricultural – was quick to sort it and came out, pulled out the plungers and welded them up straightaway to keep us going.

During the time we have had the BigPacks, Krone UK has been very good on backup. Last spring they supplied new, re-enforced plungers for all three balers and we haven’t seen any issues since.

Producing a square, straight-sided bale in UK conditions is a challenge for many balers, particularly when swaths have been turned or left for a while.

We’ve found sidewinds can cause a huge difference between moisture levels on one side of a swath and the other, particularly when a single-rotor rake has been used. It’s difficult to imagine, but that can lead to uneven bale shapes.

Initially the BigPacks suffered this problem badly because they employed strain gauges in the chassis frame to guide operators in how best to drive to get the best-shaped bales.

They were too slow to respond and since Krone has swapped to con-rod sensing as on the Hesstons, which is much more responsive. That seems to have solved the problem.

The BigPack’s overall bulk means it needs plenty of rubber to carry it across delicate ground. Consequently the Roworths’ three Krones run on tandem axles, while the Hesston-built balers stick with a single beam.

In damp conditions we find the single-axle machines travel better because there’s less rolling resistance with a pair of big wheels. And of course with no steering or suspension, they’re mechanically simpler and therefore cheaper.

We’ve had tandem-axle balers on 500mm tyres before and they take a lot more pulling. On 620mm-wide rubber, the Krones are slightly better, but sap power in the damp.

The big advantage of twin axles is that they tend to ride better both on the road and in the field and they’re slightly narrower.

With its 120x90cm bale chamber and ability to pummel material in at extra-heavy density, the Massey Ferguson 2270XD does the lion’s share of the business’ hay and silage baling as well as performing its role as a frontline machine during the straw campaign.

Despite the smaller bale sizes we’re still able to get up to 500kg in straw.

That’s brilliant for getting the weights for haulage. It produces really good square-shaped bales and is really reliable.

But care is needed in heavy crops of grass. The extra density can mean that material can be packed in so tight that it can’t ferment to produce decent-quality silage.

The XD’s only limiting factor is its pick-up and stuffer. It runs too slow to really romp at high speed in a thin crop and has a tendency to bung up if you push it too hard in heavier crops – and then it’s a job to unblock it by hand.

That’s where Krone’s camless pick-up really comes into its own. With dog-clutches, when you get a stuff-up you just lift the pick-up and it clears itself.

Its work rate was absolutely staggering. It was pumping out about two 550kg bales a minute. The flake size was huge – about 15cm – so it was averaging about 18 flakes a bale.

It was running alongside our MF2270XD which was doing about half the number of bales with 30-35 flakes.

The truth is that we’re probably better with two cheaper high-density balers – that way we can keep two customers happy at once, especially in a wet season.

So which colour do you plump for when you’re in the market for a 4×4 baler? According to the Roworths there’s no out-and-out winner and running a mixed fleet has distinct advantages.

Packed full of clever German technology, the Krone should be the clear choice.

While it’s great for output – we can reliably get an average of more than 10,000 bales a year out of the BigPacks – they need more muscle up front and we can’t get the extra bale counts in really dry crops.

In contrast the simple Hesstons achieve an average of up to 8,000 bales a season, rumbling along dependably whatever the conditions.

You have to pay £10,000-£15,000 more for the BigPack 4×4, which is hard to justify. On top of that, the Hesston holds very strong in the second-hand market. We’re better off running a mix to cater for whatever harvest throws at us.

With the combined daily output of six balers adding up to some 3,000 bales, getting fields cleared is a priority. The Roworths use three bale chasers to get the job done as quickly and efficiently as possible. 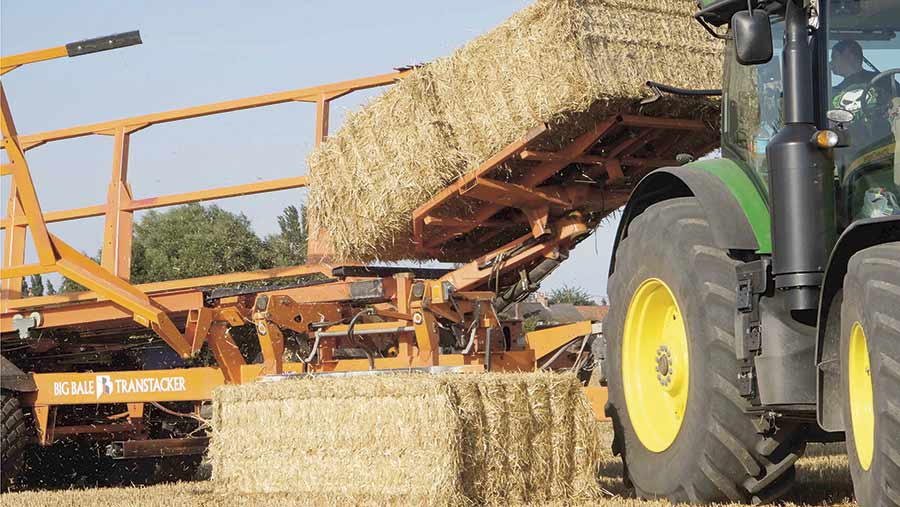 While the Heath is liked for its speed, reliability and ease of operation, its limitation is its inability to pick up previously stacked bales and the fact it can only handle 4x4s.

In contrast, the Transtackers will deal with 4x3s, Quadrants, as well as standard and mini-Hesstons if required.

They have the advantage of being able to go back and pick up bales from a stack and, with a nudge bar on the front of the tractor, can run in line with the combine’s wheelings to work within a controlled-traffic system. 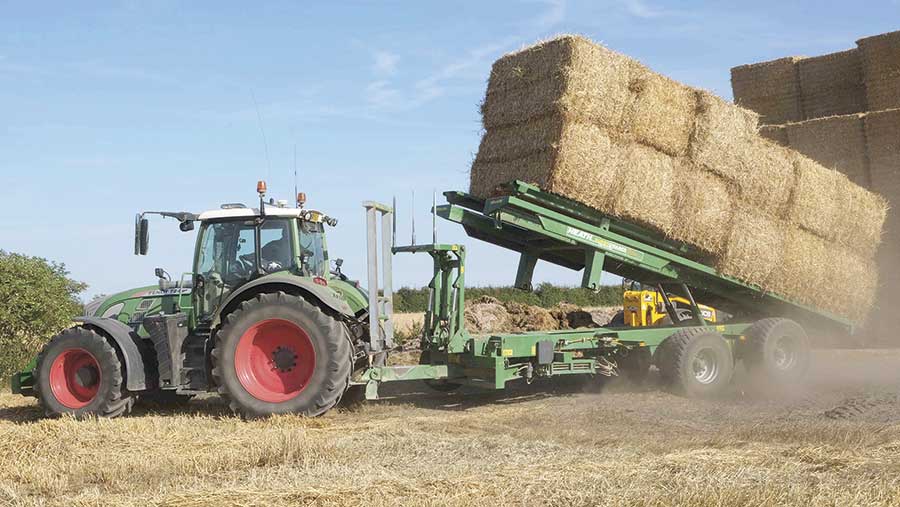