We get the views of Dalkeith-based farmer and contractor Andrew Sommerville, of Smeaton Farm, Dalkeith, Midlothian, on his Vicon Fastbale baler-wrapper.

What made you choose a Vicon Fastbale?

In truth, I would have been happy with another Kuhn, as it would eat anything I put in front of it, but the finance package offered by the dealer wasn’t that attractive – I had to pay 50% up front and didn’t have a trade-in to cover it. I also felt they weren’t really after my business, so we decided to wait.

By chance, Henderson Grass Machinery in Haddington was quoting for my fertiliser spinner and, after a few conversations, ended up giving me the option of three ex-demo Fastbale machines.

I’d only ever seen videos of them, but Hendersons sweetened the deal with a three-year warranty and service plan. I paid £80,000 for the 2017 unit. 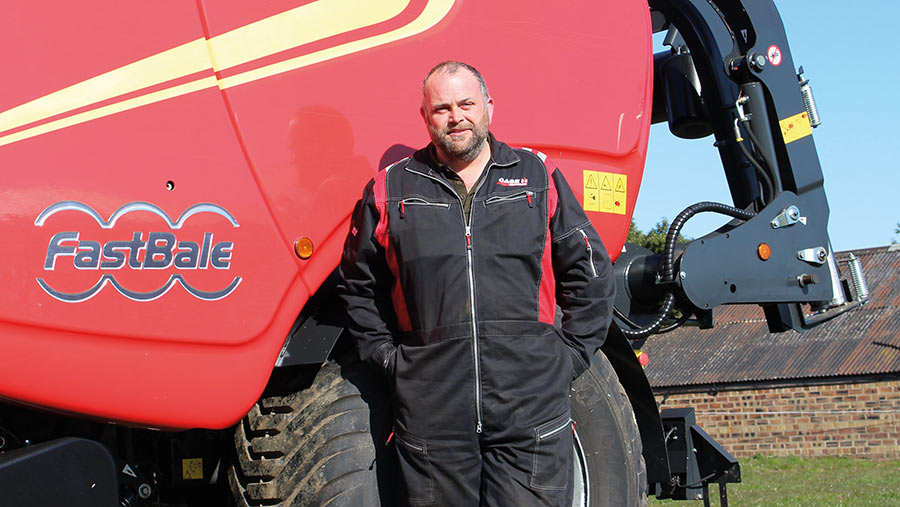 It is Isobus-controlled through the Tellus Pro screen in the cab, which is handy, but the glare on the screen during sunny days often makes it impossible to see the icons.

The crop enters a pre-chamber, which is about one-third smaller than the main chamber. Once full, a door opens and it moves to the bigger chamber, with a diverter plate switching the crop flow to complete the bale. The feed is diverted back to the smaller chamber to allow the finished bale to be netted and relocated onto the wrapping rollers.

The whole system is automated once I press play and the only reason to stop is for more net or film. There is no stopping to unload or transfer bales from the chamber to the wrapper – I reckon this fact alone has nearly doubled output. I can comfortably average 70 bales/hour in both hay and straw, with some spare capacity to go a bit faster.

I’ll usually put on six layers of wrap, but there are only nine holders for spare plastic and net spools, so I’m thinking about adding a front-mounted carrier that will allow me to stay in the field all day.

I have only ever had one missed bale in the 5,000 or so that I have made, and I put that down to operator error.

However, the Fastbale is power hungry, unlike the Kuhn, and my Valtra N163 struggles baling straw up hills. Even small inclines mean I’m dropping the gears and it really needs an extra couple of cylinders to cope.

We had one tiny breakdown last year when the net wrap actuator sheared off on a Friday night. Hendersons was great and did its best to fabricate a part to keep me going, but I had to wait until Monday before we were running again. Luckily it rained all weekend.

I usually run with 13 knives engaged in grass, which gives a pretty consistent chop length of about 100mm. I can also have 24 blades, but they tend to munch it up too small. The 13 knives give a tightly packed bale that holds its shape through the winter.

There is a valve on the rear of the baler that I can change for dry or wet hay but, in my opinion, it doesn’t make much difference. Density is changed via the screen, though I rarely tweak it.

The biggest improvement would be a system to blast away debris that builds up between the pre-chamber and the gearbox protector plate. This prevents the pre-chamber expanding fully and I reckon I get out every couple of hours to unblock it, but a jet of air after every bale transfer would keep it clean.

The net wrap roller on top of the baler makes sense, but the integrated steps need an extra tread plate at the top to stop your foot falling through the boot-sized hole when switching between rolls.

I have added two hydraulic dampeners on the big rear-opening service doors to stop them getting clobbered by the wrapper behind. There is also a chain tensioner that sticks out at head height next to the auto greaser pot – I’ve had a few choice words with it a number of times. A couple of lights under the panels would be handy, too.

Yes, without doubt. One of my original reservations was the availability of parts, but the backup has been really good, so I’ll hold onto this one for a few years yet.