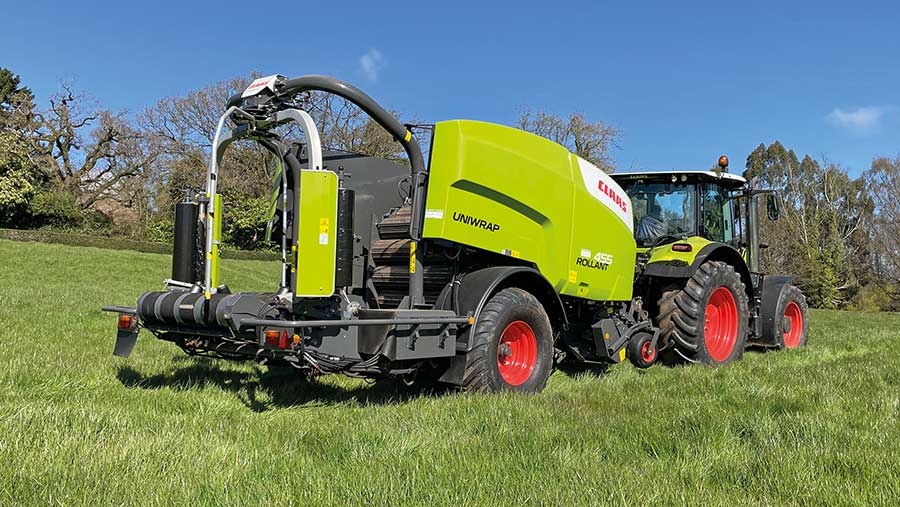 We get the lowdown on the Rollant 455 Uniwrap baler-wrapper run by contractor Wayne Sperry of J&S Agri, Llwyn Celyn Farm, Abergavenny, Monmouthshire.

What made you choose a Claas baler-wrapper?

I’ve had several Claas balers and, after running a Rollant 255 and 375 Uniwrap, I was keen to get higher output and a bit more refinement.

The 375 was a good, solid machine, but the wrapper was slow and output was limited to about 20-30 bales/hour. It was also fairly basic and the vertical wrap holders were hard work to load and unload – I’ve got a bad back, so I really struggled with them.

When the time came to change, the 455 had been out for a couple of years and it seemed to be going well. Output was considerably higher than the 375 and there were several features that I liked the look of.

However, the hydraulic folding wrap carriers were the thing that really clinched it for me. They drop down horizontally to about waist height and they can be loaded really easily straight from a pallet.

I bought a new model from my local dealer Riverlea in 2019 and it arrived just after the start of the season – it set me back about £58,000. I could have had a McHale Fusion for similar money, but I’ve had good service from my dealer and Claas, and the machine offered everything I needed.

Somehow the bale count managed to get wiped from the screen, but it has produced about 10,000 so far without major problems.

Output is almost double that of the 375 at about 50 bales/hour. Most of the improvement is down to the speed of the wrapper, which can put six layers of wrap on in 23 seconds. 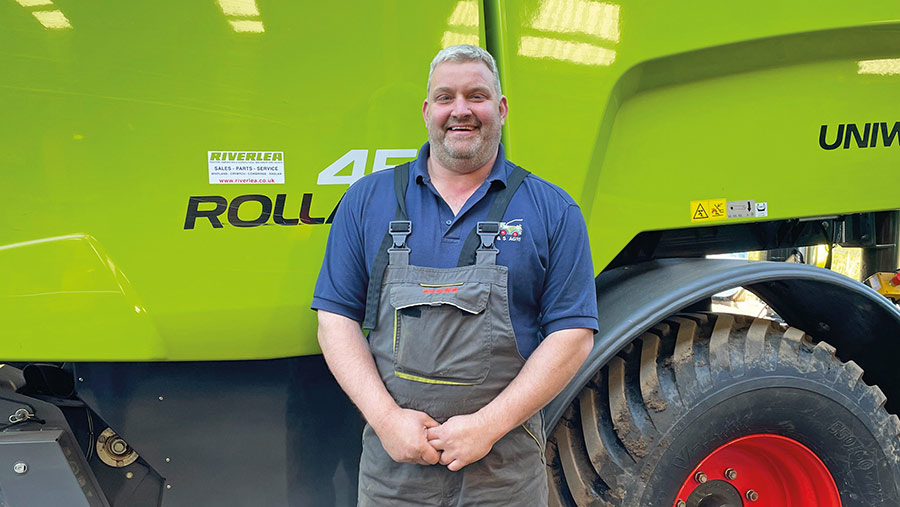 The transfer arm that lifts the bale onto the wrapping table is also far more efficient. It was one of the things that limited the speed of the old model, but it’s almost instant on this machine – it will even transfer the bale when going down a steep slope.

As a result, the baler can easily work at speeds of 10kph and I only have to slow down if it’s a heavy crop and I’m putting on six layers of wrap.

Bale shape and netting is also consistent and I’ve only had problems when I switched to using some cheaper net. I soon moved back to running Claas stuff and there have been very few dud or untidy bales since.

As it’s a relatively new machine, the dealer has been out to it several times to perform upgrades. I didn’t have any issues before these were installed, but it’s nice to know that it has been kept up to the latest spec.

The baler has 25 knives that can be run as a half set of 12 or 13, but I rarely use them, as most of my customers prefer uncut silage in bales. Density and shape are never a problem, though, and I can easily get 1t into a 1.2m bale.

Although it’s a fixed-chamber model, there is a small amount of variation in bale size, which is achieved by moving the tailgate slightly. I normally run it at the smaller 1.25m setting and expand it to 1.35m if I need to squeeze a bit more in at the end of the field.

Bale consistency has also been helped by the fact that the controller beeps to let me know when the chamber is three-quarters full. This didn’t happen on the old model, so I ended up fitting a visual indicator so I knew where I was.

Because I had the baler a couple of years after it came out, most of the niggles had already been ironed out. Plus, the upgrades Claas has fitted along the way have helped keep it up to date.

The one thing I would like to change is upgrading the hitch from a ring to a Scharmuller-type ball as they ride so much smoother.

My baling workload has tailed off a bit as more customers have expanded their silage pits, but as long as I have a sufficient demand, I wouldn’t hesitate to have another.

I don’t think it can quite match a McHale Fusion for output, but it’s plenty fast enough, nice to use and has proved to be reliable.