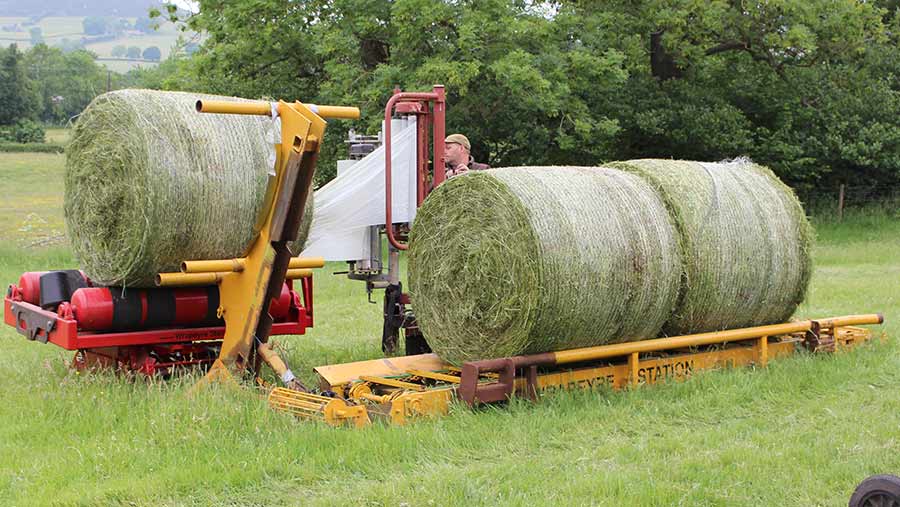 After developing a strong aversion for wrapping bales in the field where the baler dropped them, Geoff Eyre wasn’t a fan of the somewhat tedious job of collecting wrapped rounds and steadily loading and unloading to avoid damage.

The Derbyshire farmer has about 400ha of mixed land, ranging from heather-covered hills to lowland grass fields, with a well-established agricultural merchant shop, now run by his son and daughter, and heather harvesting work among general farm duties.

A regular entrant to the Farm Invention Competition run every winter on the FW machinery desk, Mr Eyre says that he is at his happiest when he sees a farmer using his design and getting the most out of it.

His manufacturing adventure started in 1983 when he built the first Traileyre, a simple round-bale collector, which won a gold medal at the Royal Agricultural Show in 1986.

Since then, the building rights to the Traileyre have been sold to Ritchies in Scotland, which now sells around 25 units a year in sizes from 6- to 10-bale units.

See the Traileyre in action in the video and read the full report below.

Each of these arms folds down to the side of the trailer when the correct switch in the cab is flicked and spears the bale the driver has driven alongside.

Once the spike is home, the opposite spool valve control is activated and the bale lifts and sits on the trailer, with the spike keeping it secure.

Each spike is mounted on a five-degree angle, so as the ram lifts the bale off the ground, it crowds back slightly as you would naturally do if you were using a loader, to avoid any scrubbing as the tractor continues forward.

However, Mr Eyre had a vision of a full wrapping and collecting service provided by one man and a tractor.

So he and his two workshop demons, Neil Deakin and Kieran Logon, have been beavering away in the workshop on and off since 2015 to develop a wrapping system that will outcompete offerings from the biggest grassland machinery makers. 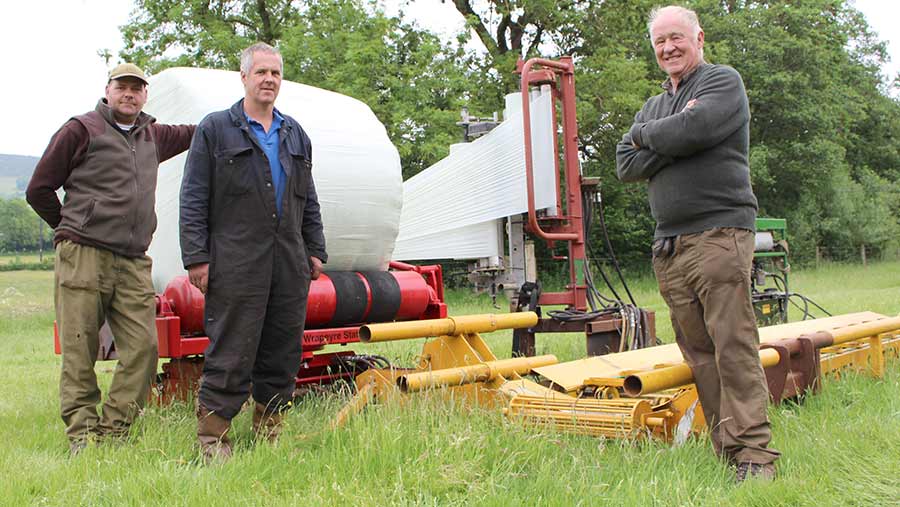 To complement the trailer, a wrapping unit and conveyor was designed to load bales without the need for a loader.

The team constructed a curved conveyor with the idea that the Traileyre can reverse into the middle and drop a full load of six or eight bales on each side and the conveyor will cart them around to the wrapping unit.

However, the complicated curved design meant it was too costly to consider manufacturing and the most time-consuming process for the trailer driver was backing into the curve and getting the correct position for dropping off every time – something that hindered output drastically.

With the curved unit destined for the bin, the team chopped the moon-shaped end off and were left with two straight conveyor units, each able to take three bales.

The simple conveyors have been built with off-the-shelf parts from various companies either sourced on the web or in the local area.

Sprocket drives at either end rotate and have two chains on either edge, running the length of the conveyor. Grooved bars spaced in the middle grip the bale and move it down the conveyor.

The design has helped to keep cost low and replication easy. 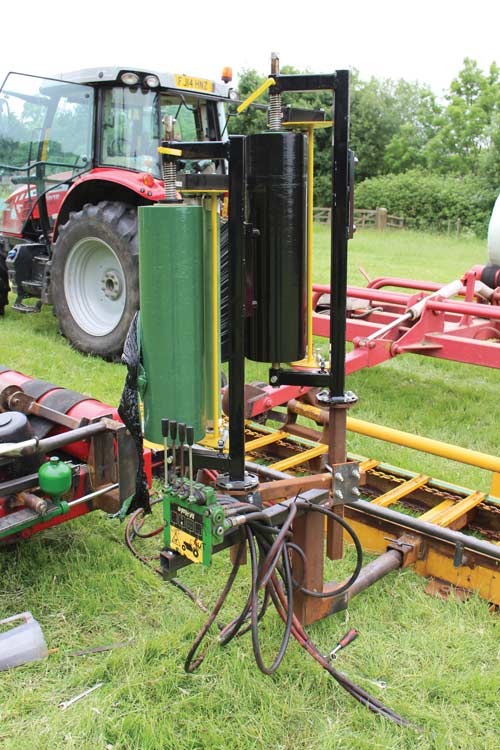 The wrappers are adapted McHale stationary units that have been lowered by around 6in to fit in with the loading height from the conveyor and avoid any snagging, which happened on the original version.

By adding a second wrapping unit to mirror the original and make use of the second conveyor, output was doubled and the tractor and Traileyre was able to drive in, drop the load and drive out forwards again in under a minute.

It barely moves off tickover, so fuel use is considerably less than having an old tractor powering the wrapper.

It has not been plain sailing since then as there have been numerous modifications and adjustments to fit in with the new system, including feed rollers, controls units and roll holders.

Always mindful that one day he may sell the units to paying punters, health and safety is a key consideration and Mr Eyre seeks advice from the Health and Safety Executive when a major change is made.

The latest modification required is to reduce the trip hazard the conveyor causes as currently someone can tread in the centre of the moving conveyor.

Helping the bale onto the wrapper unit has also been improved by adjusting the lift arm to include a set of wheels from an old animal feed trough, so the bale is now rolled onto the table rather than being forced by the metal arm. 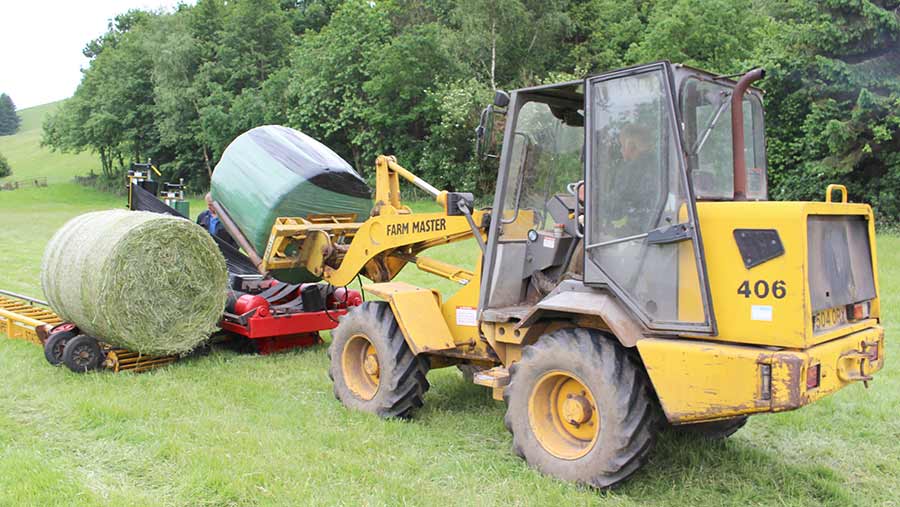 Mr Eyre is confident that the two wrapping units running in conjunction with a Traileyre, hauling from a nearby field, can collect and wrap 180 bales per hour at its peak output, which he claims for the capital cost of the setup, would easily knock a £1 per bale from the contracting price.

When we visited, Mr Eyre had the process running and managed to load, wrap and stack five bales in under 2.3 minutes.

Loader hours will also be reduced as it will only be handling the bale once to remove the round from the wrapper, we’re told.

He is keen for the setup to be a one-man operation, with future modifications including fabricating the two conveyors to lift onto each side of the Traileyre via the bale collecting spikes.

The wrappers will be loaded separately by telehandler into the middle of the trailer, before the conveyors are connected and hoisted on the side with the roll holders folded down for road transport.

There are also plans to use a monster 600-bale roll at six layers a bale, rather than the staggered two-roll system currently employed, which can manage around 120 bales before it needs to be changed.

The roll holders are made by Film Technique in Wiltshire, and mounted in the standard arrangement, but bigger rolls will be horizontally mounted due to their weight. 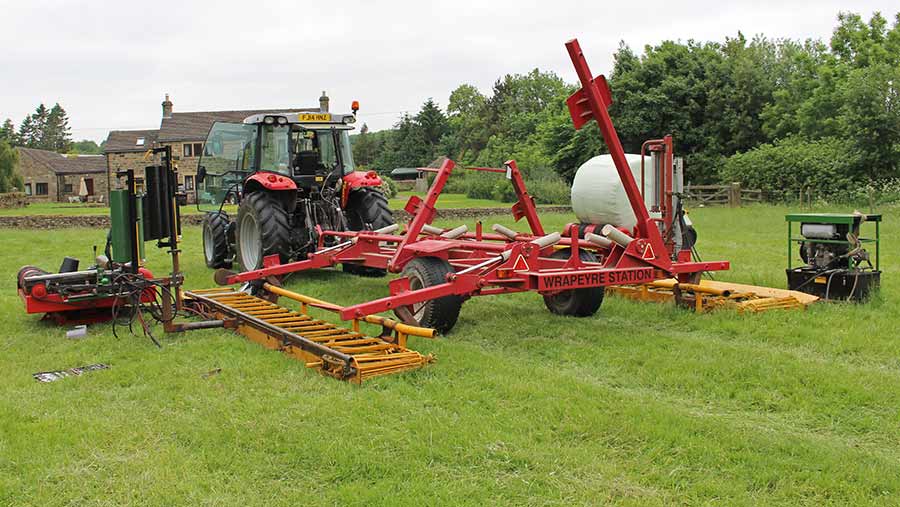 As with any new product, getting it to market and in front of prospective customers will be the biggest hurdle.

As there are still tweaks being made, the Warpeyre won’t be on sale until Mr Eyre is happy with it.

However, if it stirs enough interest, he will also have to find someone to build it as he admits his farm workshop area isn’t up to full-scale commercial manufacturing.

His current challenge is upgrading the electrics of the system so the loader driver stacking the wrapped bales can be in control of both wrapping units.

Once this has been sorted, the labour requirement will be halved and the cash savings will be increased.

Both wrappers will also still have manual controls, should the technology ever fail.

When farmers see the current machine, there is a mixed reaction as there are no shiny paint jobs or a well-known manufacturers’ name splashed along the side, but Mr Eyre is confident that once the machines get to work, farmers and contractors will be convinced by the output.

Proposed pricing doesn’t look too bad, either. The whole package is likely to sit around the £20,000 mark for two conveyors, wrappers and a Lombardini engine.

Remote-control wrappers may bump the price up further, as will having the wrapping units specially made to fit the system, which is also in the pipeline. 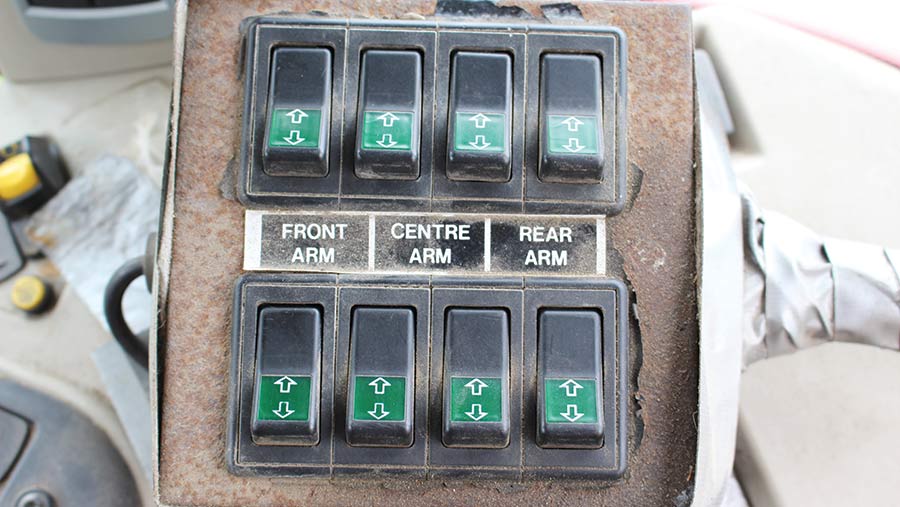