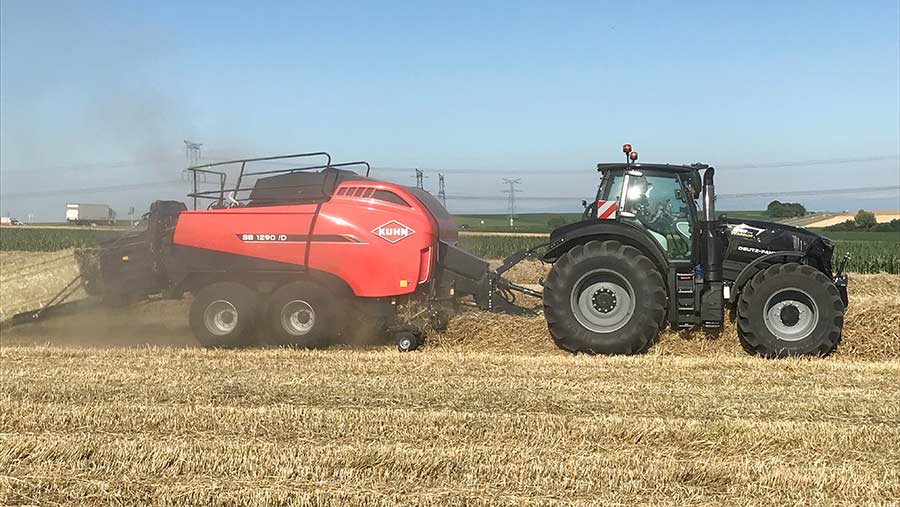 Kuhn has redeveloped its LSB square baler range by giving it a new name and styling, along with internal upgrades designed to up output to near the 100t/hour mark.

Underneath, Kuhn says it has beefed up the driveline on the SB models with a different crop guard, along with a torque increase on the rotor and feed driveline that should equate to a 15% higher intake capacity.

The torque regulation system monitors pressure on the driveline, most notably with the crank angle position sensor and plunger load pins.

If different pressures are felt from the plunger cycle, the operator will be guided to feed extra material into one side of the machine to get the bales up to the maximum density.

A 485kg flywheel has been added in place of the old 285kg unit, too. This apparently means the operator will rarely feel the plunger strokes in the cab, as was the case before.

A new load-sensing hydraulic system with a 25 litres/min pump controls axle locking, chute rollers and the bale ejector. It also blasts an air stream over the knotters to keep them free from debris.

Dropping the bank of 23 knives in and out is almost instantaneous, says Kuhn (it used to take 30secs) and all models use double-tine knotters. There’s no option for single-knotting systems as were available previously – they’re not able to achieve the highest bale density on all machines.

As before, the SB models come with a high-density version of the biggest 1290 machine.

In total, 85% of the iD’s internal workings, including plunger rollers, remain the same as the standard model.

The biggest difference here is the split plunger system, which means it requires the same tractor power as the 1290, but can achieve up to 25% higher bale density.

The plunger works in a staggered run, so there is no oversized flywheel or gearbox. The bottom half hitting the bale first followed by the top half, using the full 30t of force available on each hit.