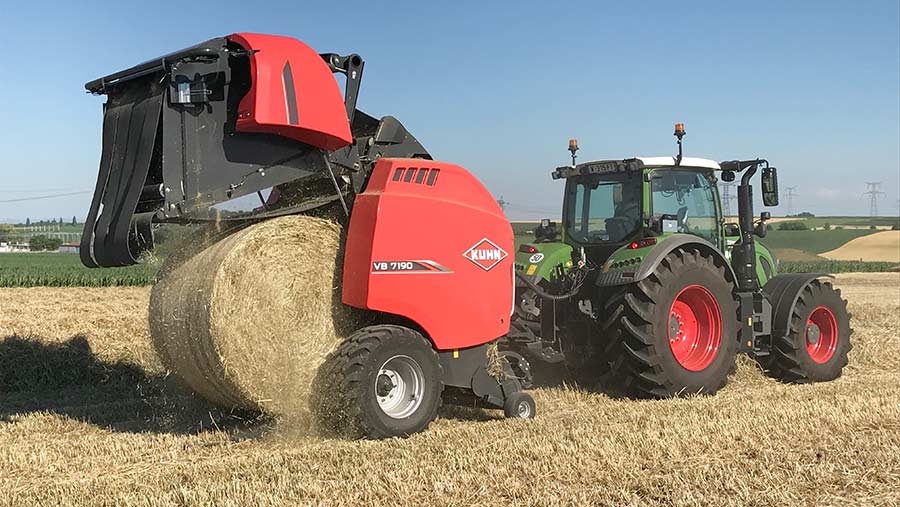 A new, high-output 7100-series line-up has been added at the top of Kuhn’s round baler range. The new models jump ahead of the 3100-range in terms of capacity and should suit contractors, as well as farmers keen to take control of their own workload.

Central to the new design is Kuhn’s patented i-dense system, which uses a clever twin-arm tension arrangement working in tandem with the onboard moisture sensor to vary bale pressure depending on crops and conditions. It does this without the need for any operator input.

See also: Ultimate guide to buying a round baler

There’s now tension arms at the front and rear of the chamber to help form tightly-packed bales using four belts and three rollers, with pressures up to 140kg/cu m in straw crops possible.

Kuhn claims the new 7100-series balers have the fastest tailgate in the world – open to closed takes a rapid 4secs, which is 2.5secs faster than the 3100-series.

Other features on the Isobus-ready machine include large, 40mm chains on the main drive, auto greasing and sealed bearings for ease of maintenance.

Kuhn’s integral rotor uses tines made from Hardox wear plates, with cutting units of 14 knives on the smaller 7160 models and 23 knives on the larger 7190.